You’ve likely heard the term ‘Hot Hatch’ before as it represents close to the ultimate for auto enthusiasts. The compact mass along with tuned engines and suspension bits with added style and a hatch to appease practicality is a mouth watering combination for a good portion of us.

But even with the popularity of the hot hatch, would you be surprised to know that there really isn’t that many to choose from?

Subaru has oddly axed the hatchback version of its notoriously good WRX and Mazda keeps flip flopping on weather or not it will bring back the Mazdaspeed3. In Europe, the slew of hot hatches available to them is a bit like driving anywhere in Canada in search for Tim Horton’s. You’ll find out within 10 minutes.

But now, on our shores, there’s really only two: the iconic Volkswagen GTI and the relatively new (to North Americans, anyway) Ford Focus ST. Yes, the Fiesta ST is available however, as good as it is, its subcompact dimensions eats away at practicality a bit.

While my personal preference lies with the GTI, no one will deny the fact that you made a smart purchase with either.

But if hot hatches are so good, why is there so few to choose from? Well, Kia must have been asking the same question. New for 2015 is the second generation of the Forte5 hatchback, but they’ve also added a variant with some extra punch this time around.

Is it enough to be a credible contender to Ford and Volkswagen? I drove one for a week to find out. 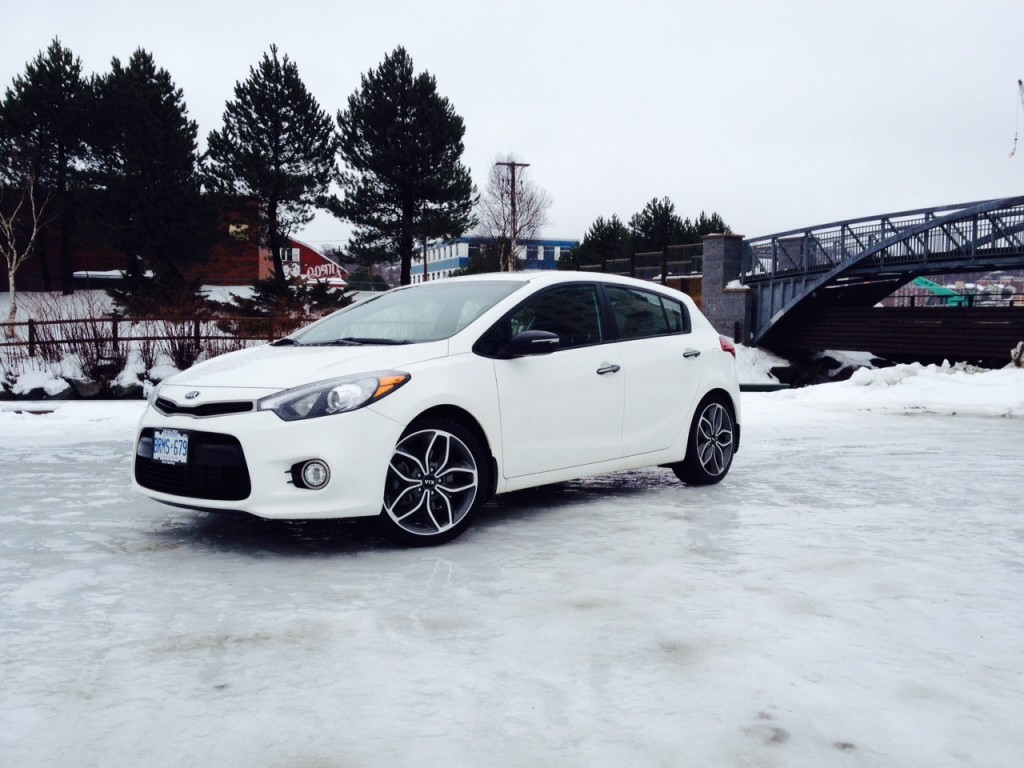 Style wise, hot hatches need to have some sort of eye-catching style. Volkswagen goes the understated route, while Ford takes on a more bold look. The Forte5 is certainly stylish within its own right, but there are only a few signs that give away the fact that you’ve got the more powerful version of the Forte5’s. The most noticeable is the 18 inch wheels which have a rather unique, eye-catching design that I eventually warmed up to, however I’ve heard some people say they look a little too much like flower petals and in turn, soften the idea of a hot hatch. The other giveaway that likely only keen eyed people will notice is that the grille is actually thinner than it is on the regular Forte5. There’s also rather attractive LED tail and brake lights – something Kia has become particularly masterful with – which completes the look. It’s certainly a good looking car, however in the hot hatch world, it is a bit tame. Hot hatches should scream “I may be small, but look at my muscles!” 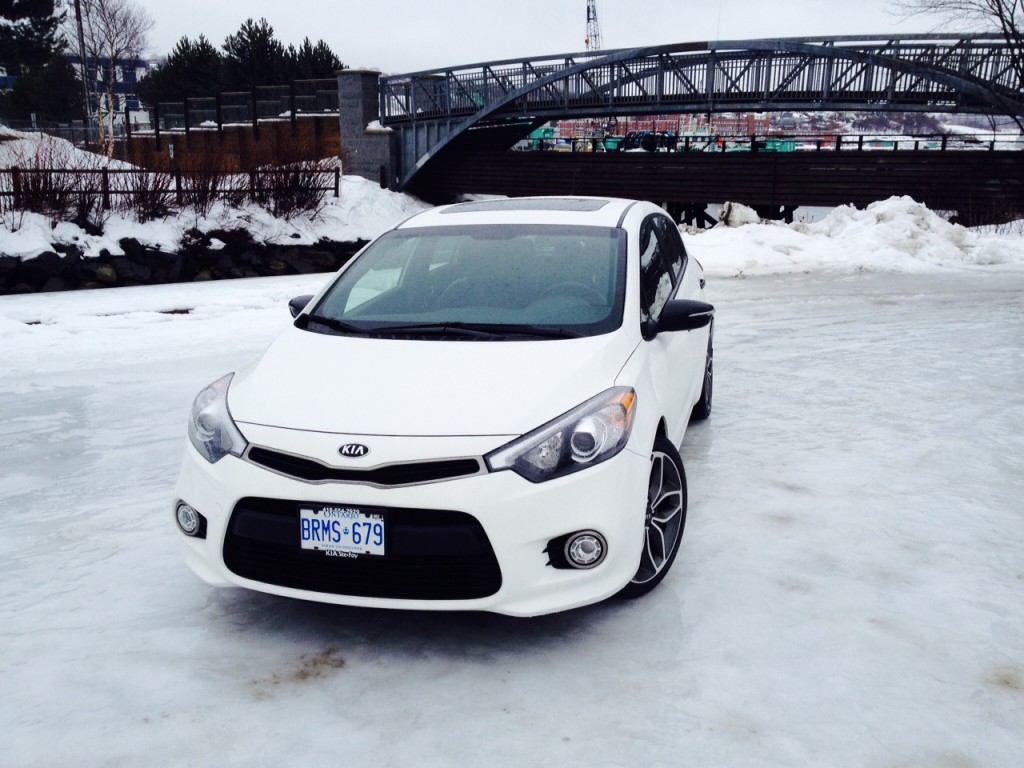 Inside is a very nice place to be, which is the case in most Kia product these days. There isn’t much inside to distinguish your Turbo from lesser Forte5’s, however the design is elegant and feels upscale. All the buttons and dials are within easy reach as the centre stack is angled slightly towards the driver, and everything is clear to read and uncomplicated to use. You’ll have to stop yourself from taking a hammer to the rather nice display screen though and it’s not because it’s glitchy or doesn’t respond to commands. It’s because every time you turn the car on a warning message appears telling you to pay attention to the road and not the display screen. Makes sense. But the issue is that warning message never goes away like it eventually does in other cars. You have to physically push the ‘Agree’ button every time you start the car up. It gets irritating quickly, and while I understand Kia may want to protect itself legally by offering up such a message, I don’t understand why the message can’t go away on its own after a few seconds. 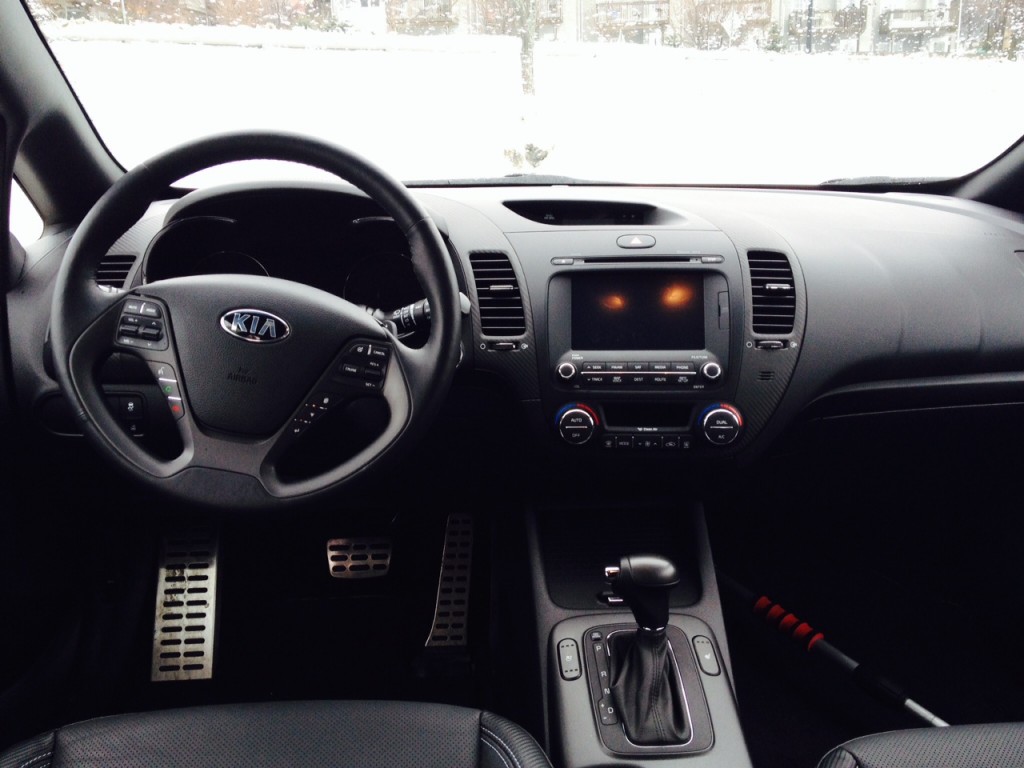 Happily, once you do agree every single time, the satellite radio will play continuously until you order it not to. In previous Kia products I’ve tested, the radio signal would get lost an unusual amount of time to the point where it made sense to just turn the radio off altogether. Not in the Forte5 this time, however the radio quality could be described as adequate. 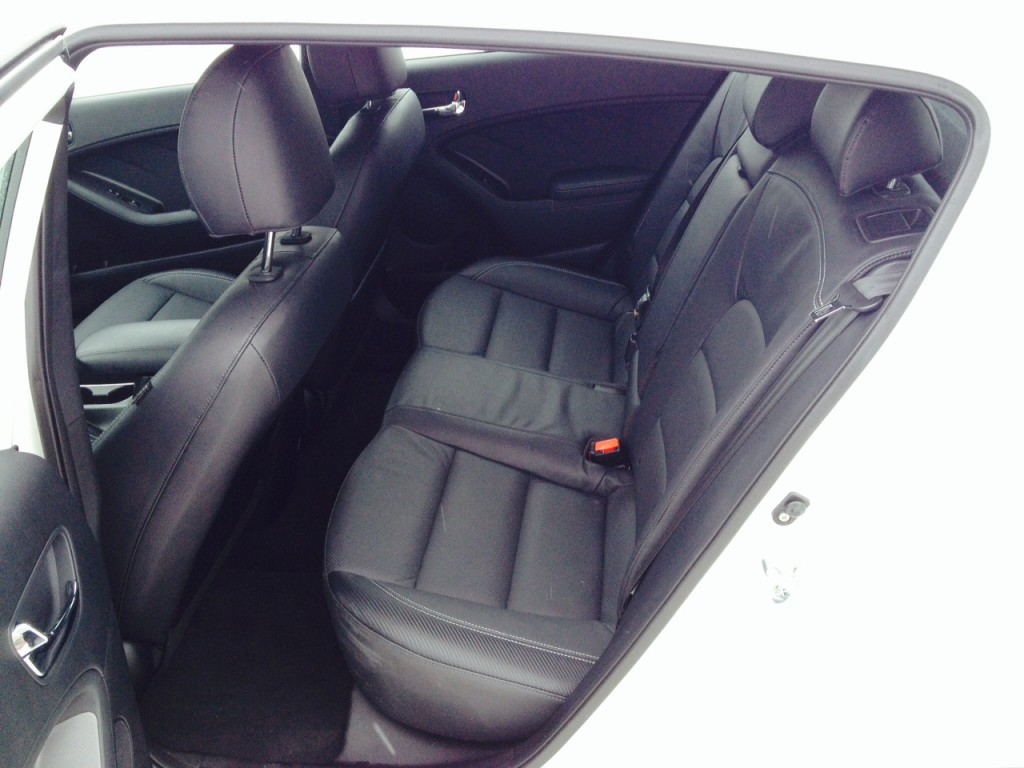 Given the Forte5’s sleek lines, interior room isn’t as abundant as it is in the GTI. You’ll have to duck your head a bit for entry and egress for the back seats and rear visibility is slightly hampered due to this design. The hatch itself is decently spacious though and with the seats folded you’ve got yourself good room for most of your stuff. 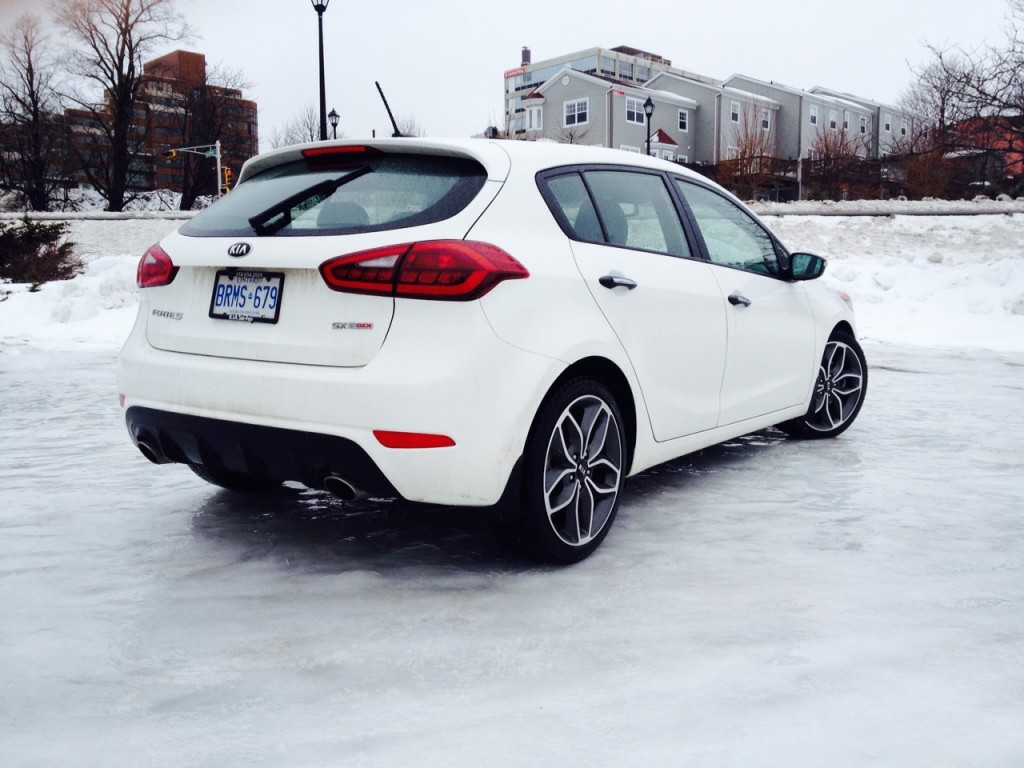 Powering this version of the Forte5 is a 1.6 litre turbocharged direct injected 4-cylinder engine which produces 201 horsepower and 195 pound foot torque. My tester’s top of the line SX-L only gets a six-speed automatic transmission. If you go with a regular SX, you can get a six-speed manual, however that means you’ll have to forgo some niceties of the SX-L such as xenon headlights, cooled driver seats, heated steering wheel etc. But the truth is, even though I can’t confirm this, the automatic is actually quicker from 0-100 on paper than the six-speed manual is. This is impressive if true considering the automatic does not have the benefits of a DSG. My impressions of the automatic were that it somewhat neutered power. In manual mode I found I got more out of the engine but something still felt as if it was holding it back. 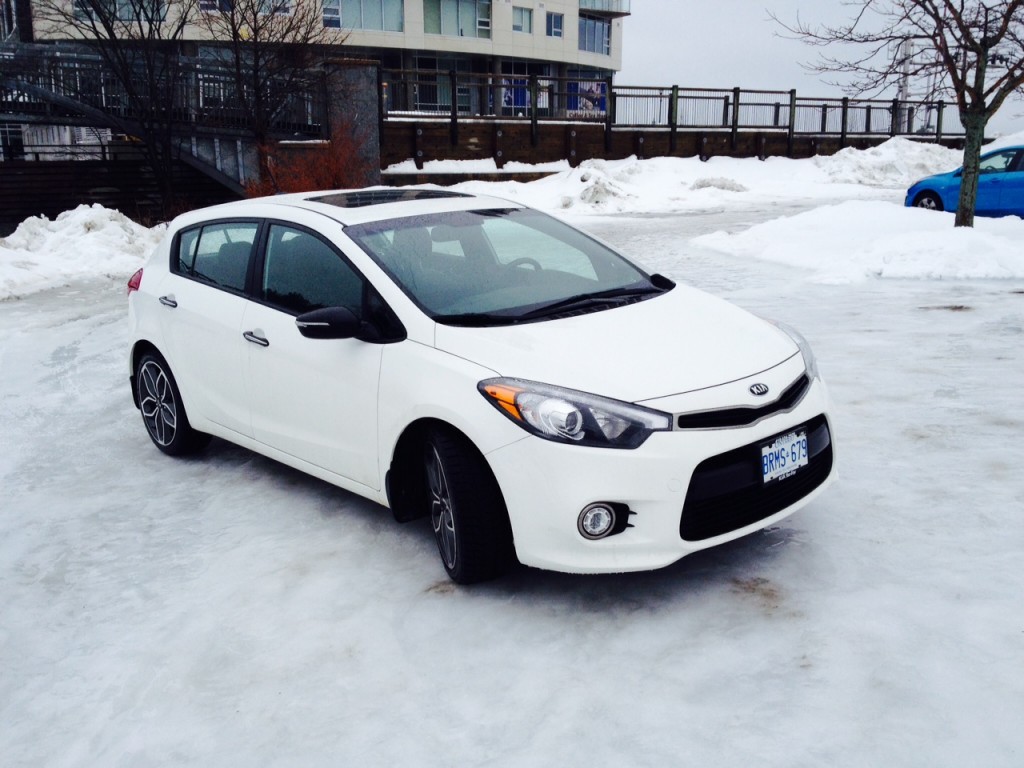 As far as hot hatches go, it feels considerably more tame than the neck snapping power of the Focus ST or the low-end torque of the GTI. It is, however, a relatively quick car that won’t really get the testosterone pumping through your body which is likely due to a lack of engine or exhaust note. It sounds a bit wheezy and as a result it kind of buzzkill’s how fast you’re actually going. Make no mistake, the Forte5 is no slouch, it just can’t keep up with the power and gusto of the GTI and Focus ST. 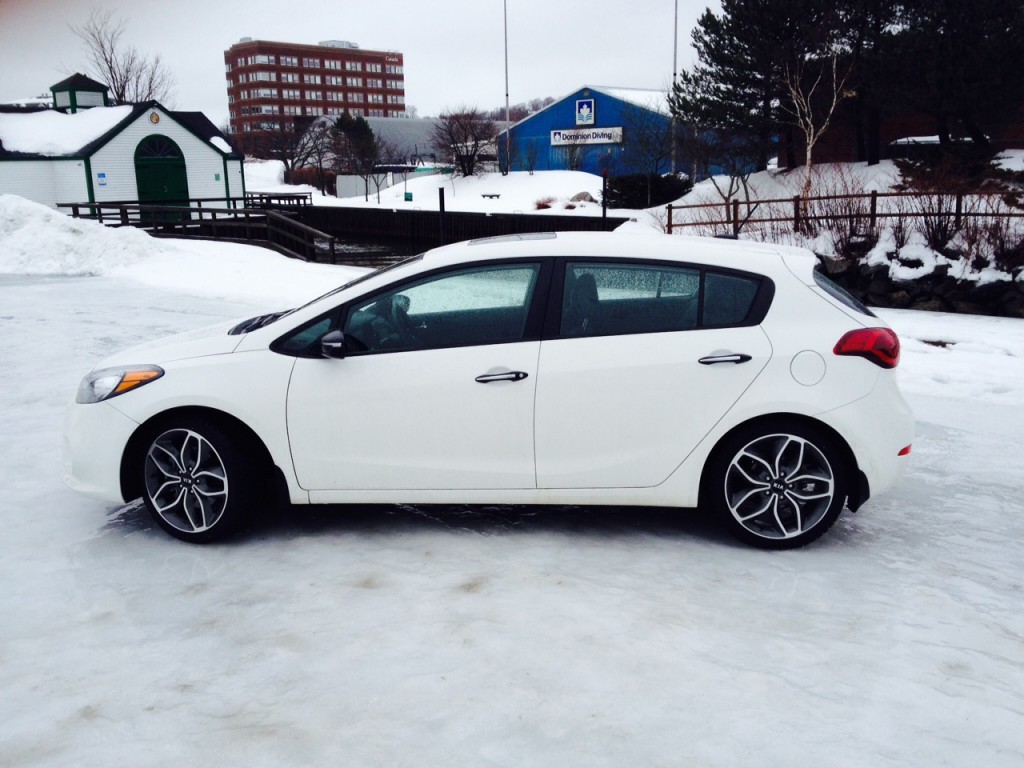 The Forte5 when optioned out with the added boost is rated at 11.1 L/ 100 kms city and 8.0 L/100 kms highway. My mixed real world testing returned 10.2 L/100 kms which admittedly isn’t great, however the weather would have likely affected this number with its cold temperatures and sketchy driving conditions. 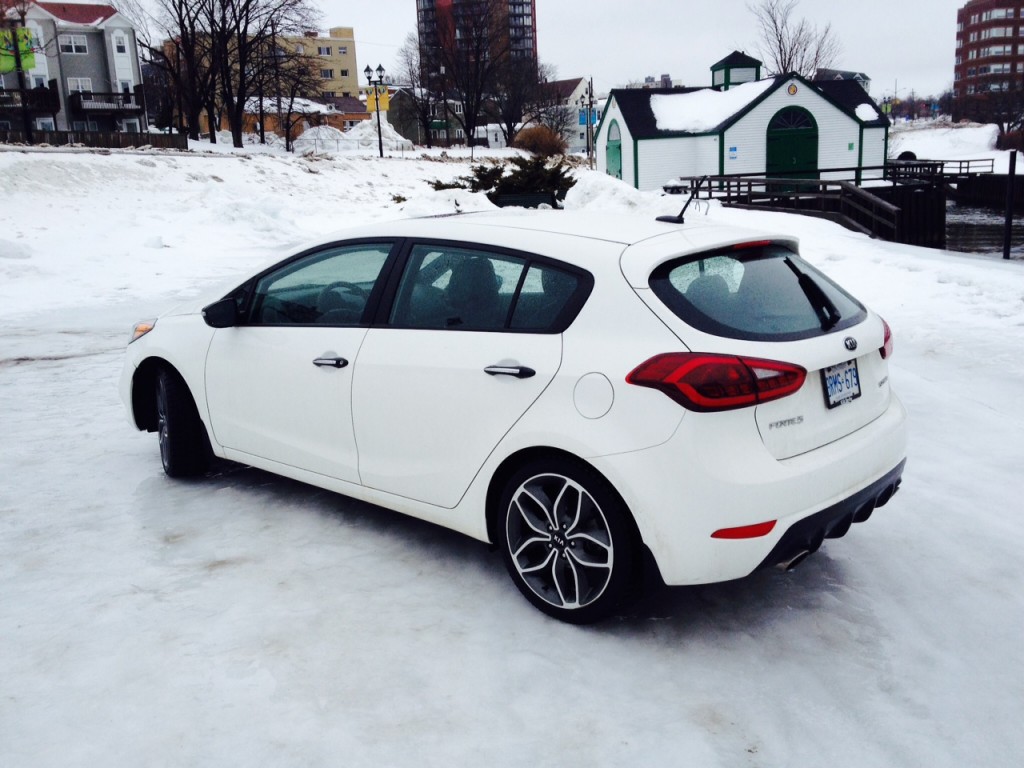 Handling admittedly didn’t get tested to my personal satisfaction and that was mostly due to the fact that the roads in Halifax were, and still are in some parts, completely covered with ice. The Bridgestone Blizzak’s fitted to my tester did an excellent job of keeping it planted on the ice, but it was difficult to test how well the Forte5 performed around a corner on asphalt. I did get enough of a sense to know that the Forte5 can certainly hold its own, however I’d wager both Ford and VW have it beat in this area too, though again, I can’t be completely sure. I’ll have to try the turbocharged Forte5 in the spring in order to give a fairer assessment. 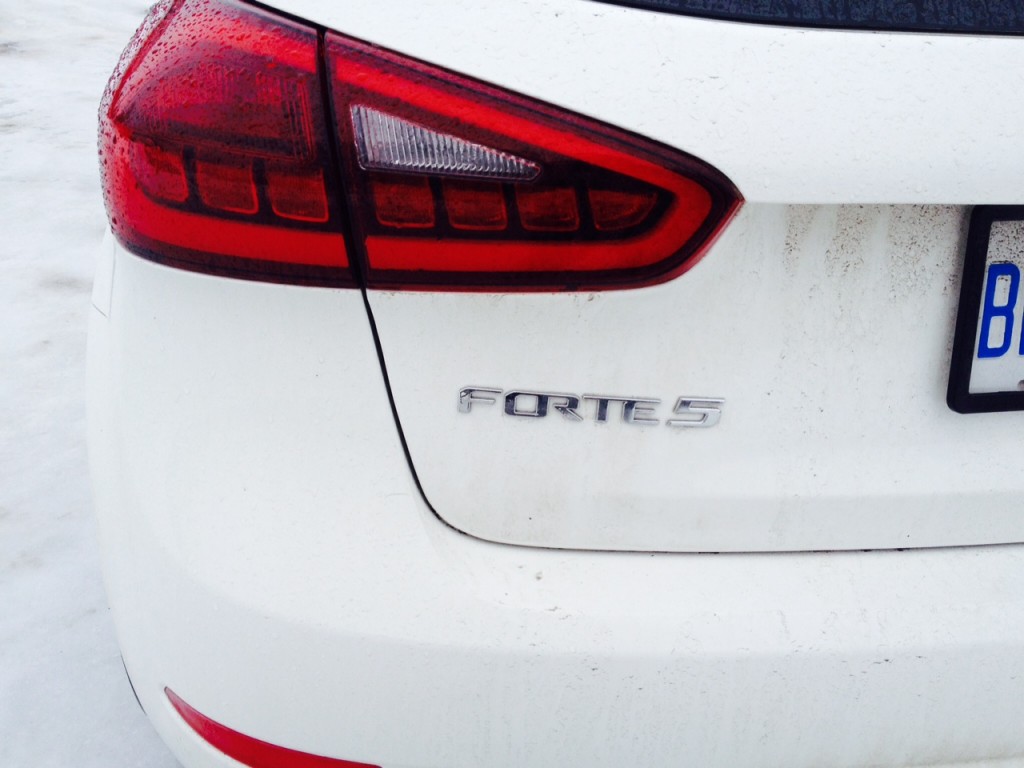 One thing I can say is that the steering set up certainly doesn’t help its potential handling abilities. As with most Hyundai/Kia product, the engineers have decided to give you a choice with steering feel. You can choose between comfort, normal and sport. Normal feels, well, normal, but sport is anything but. All it does is add a bit of weight, but it does not affect the directedness of the steering. On top of that, comfort mode is fairly useless to anyone. It’s way too light. I don’t understand why Hyundai and Kia continue to do this but I especially don’t understand why this feature would be available in a supposed hot hatch. 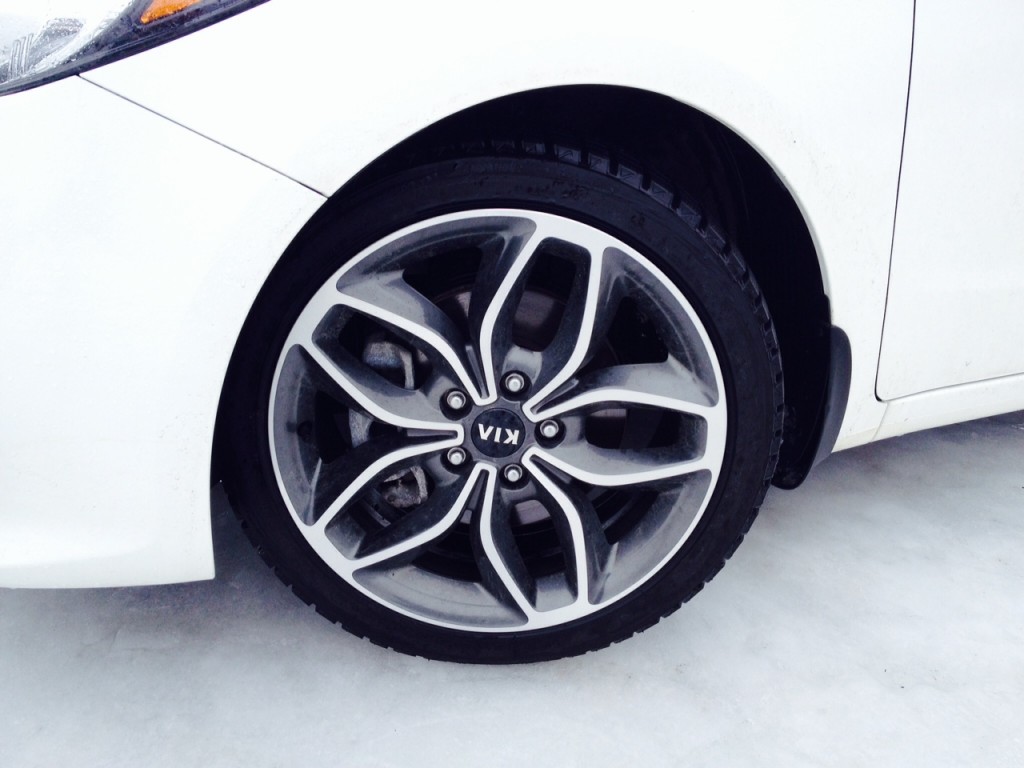 And that’s the thing. Is it really a hot hatch? By my personal definition, no it isn’t, but it’s definitely no slouch either. It sits somewhere in between the Focus ST & GTI and the regular versions of those cars. It’s nicely in the middle and I suppose that makes it more of a luke-warm hatch. By now, you’ve likely been itching to point out that I’ve forgotten another hot hatch to compare it to. Well, no. I haven’t. Because if you think the Hyundai Veloster Turbo is anywhere near in the same league as the GTI or Focus ST is then I’d like to offer you something to drink other than kool-aid. However, considering the Forte5 isn’t quite in the same league either, that makes the two competitors, especially considering they use the exact same engine. In which case, the question boils down to, do you want in your face “style” with less practicality, or elegance mixed with style along with practicality. You already know the answer.