“Who do you think has worked harder to get where they are, you are me?”

That question was posed to Alec Baldwin by Jerry Seinfeld while behind the wheel of a 1970 Mercedes-Benz 280 SL in an episode of Comedians in Cars Getting Coffee. Seinfeld picks specific cars as an analogy of his guests on the show. The Benz was chosen for Baldwin because it is, as Seinfeld puts it, a car for guys who like sports cars but don’t want to be inconvenienced, referring Baldwin’s hilariously non-chalant demeanor.

“I think I’ve worked harder than you and not gotten as far, quite frankly,” Baldwin quipped in response.

There is a lot of truth to the sentence when you relate it to the Infiniti Q50. As the smallest sport luxury sedan in the Infiniti line-up, the Q50 was birthed as the G35 back in 1998, and then it transformed into the G37 years later. Its mission in life was simple: annihilate BMW 3-series sales.

Since then, both sports sedans have been battling it out. And quite frankly, both have gotten bigger and softer over the years, as most super heros do.

Is it enough to spice up the once invigorating luxury sports sedan battle? I drove one for a week to find out. 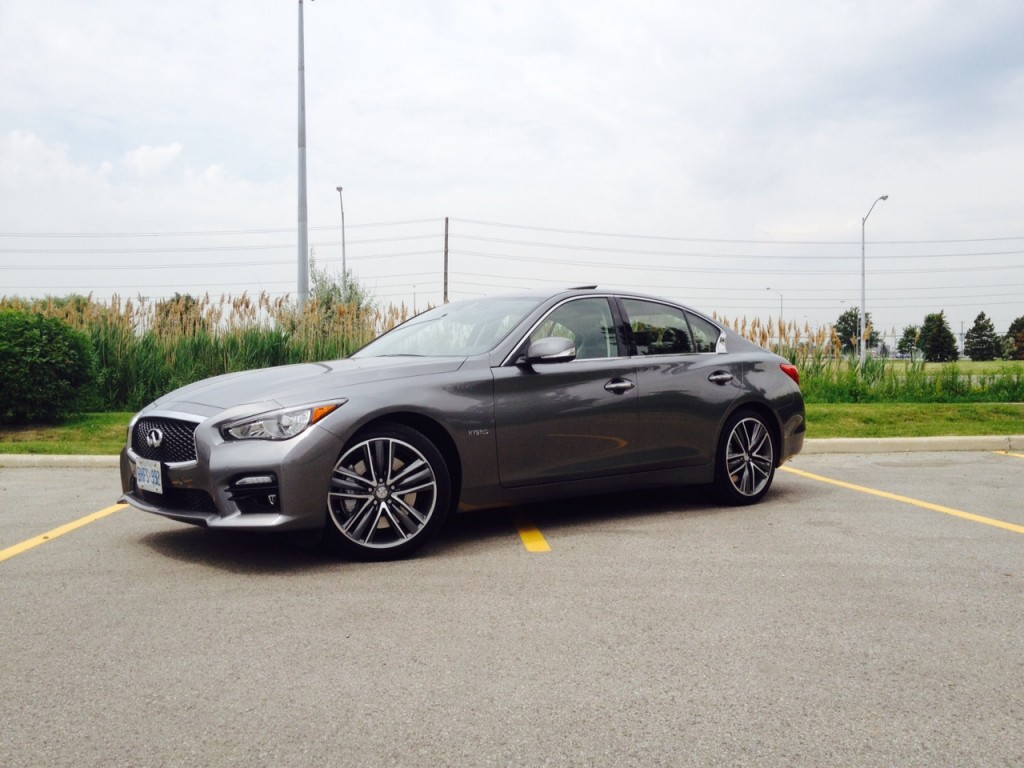 Where the Infiniti already has the BMW 3-series beat is in the looks department, in my opinion. The 3-series is decidedly BMW, but almost too much, to the point of it being difficult to tell what model BMW you are actually looking at. The Q50 manages to blend Infiniti corporate design all while maintaining its own unique identity. The 19-inch alloy wheels, which are a part of a rather pricey option package, $6,950 to be exact, really help the Q50 to stand out amongst 3-series’ and A4’s. Also helping out are all LED lights up front and LED tail lights which mimic dinosaur claws. The overall swooping lines are fluid and the Q50 does not have any awkward angles. 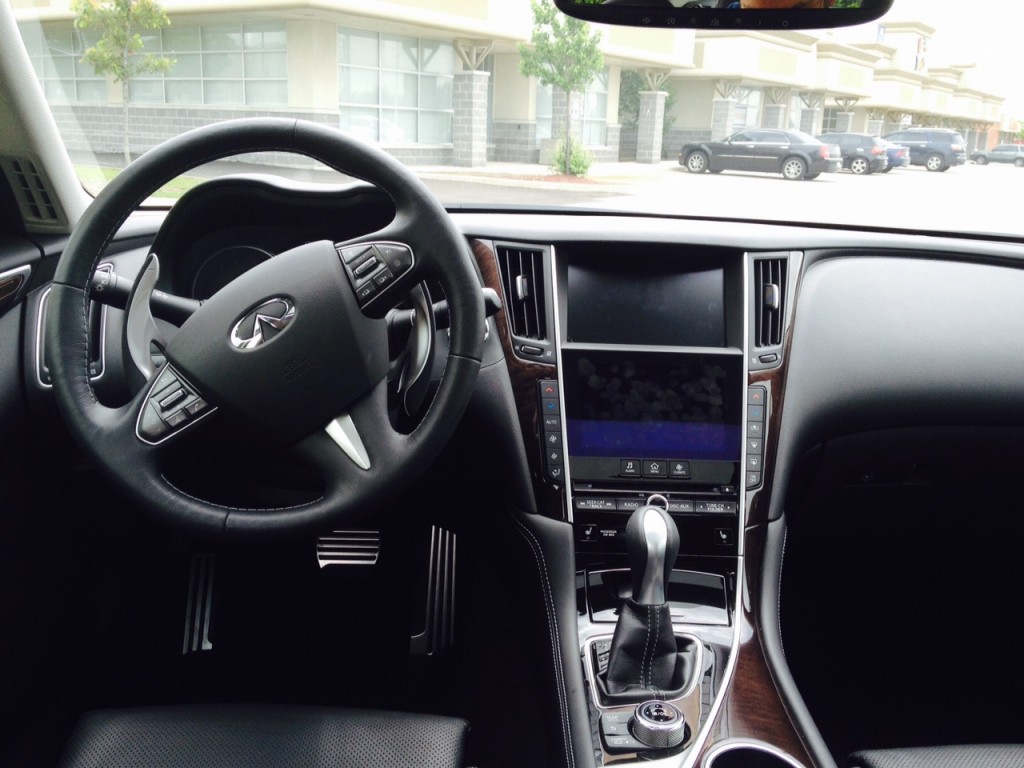 Inside, passengers get treated to a nicely appointed and luxurious cabin. Infiniti has incorporated a dual infotainment screen, much like Honda and Acura has done. I find the idea of two screens to be redundant in general, and you only have to read one of my new Acura product reviews to know why, but both screens are large and easy to read. Working the Infiniti Touch system is fairly simple, unlike Infiniti systems of the past, however it’s slow to respond to commands. The only issue is it can get heavily finger printed in a very short period of time.  Through this system you can actually personalize the vehicle’s performance settings, among other things. 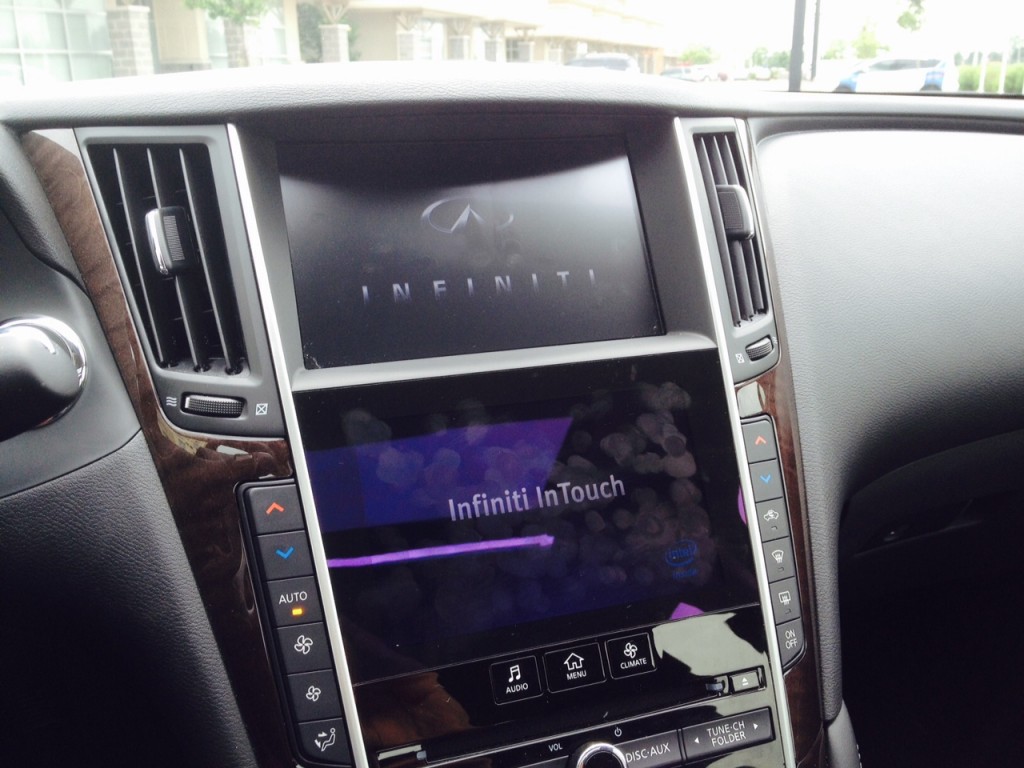 Even though the Q50 is Infiniti’s smallest sedan offering it really does not have compact-like proportions and that is especially true inside. There is plenty of rear leg and head room and the seats are comfortable and supportive. Trunk space isn’t as generous as the battery takes up some of the cargo room but it will still handle your every day errands. 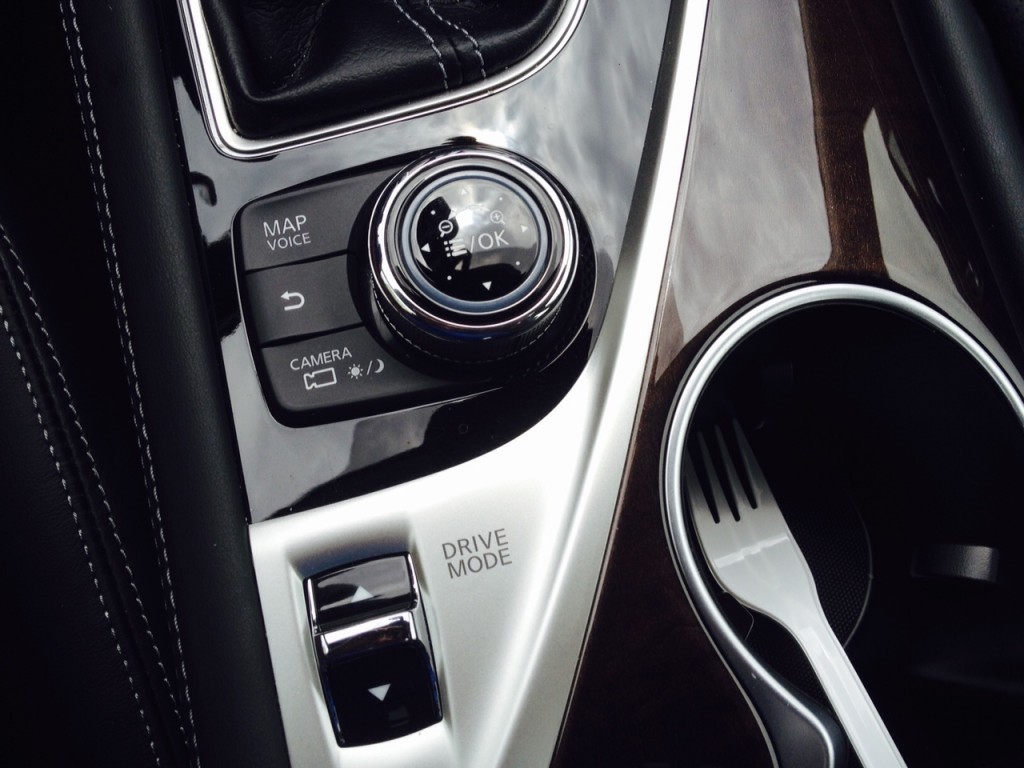 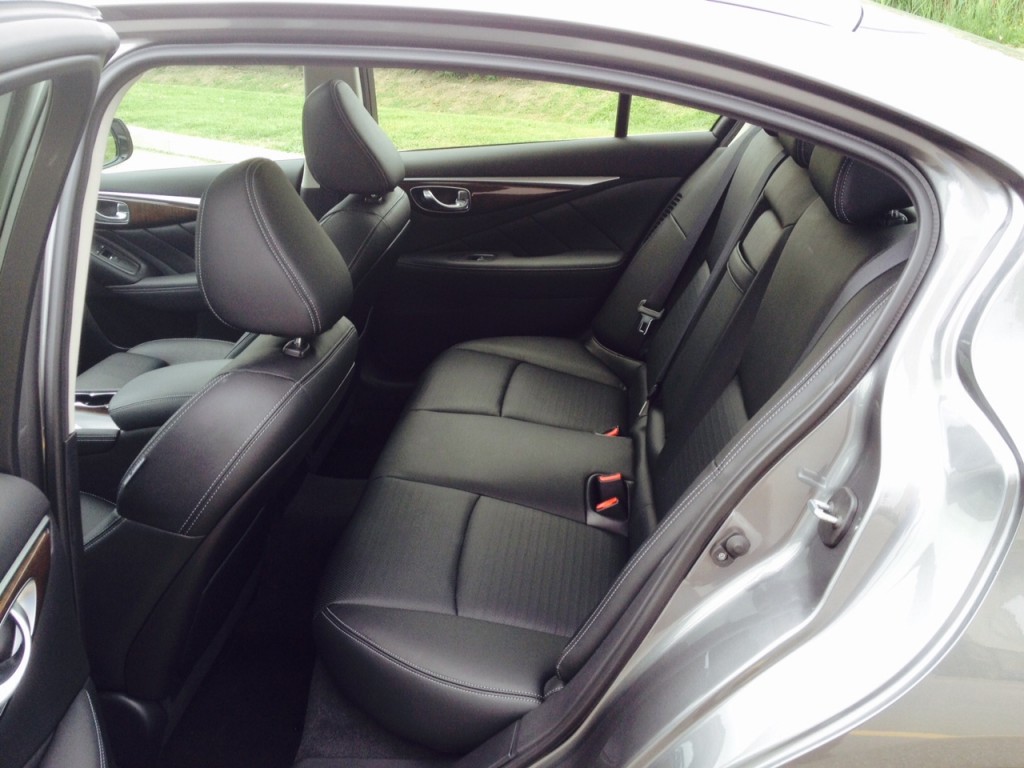 Wait, am I really talking about paddles on a hybrid? I sure am. That’s because the hybridized version of the Q50 doesn’t make fuel efficiency its number one priority unlike a Prius. It makes performance the number one priority. So I won’t even get into fuel efficiency other than to say the Q50 hybrid is rated at a respectable 8.7 L/100 kms city and 7.5 L/100 kms highway. Anyway, the Q50 hybrid is actually more powerful than any other trim level. While regular gasoline Q50 make due with a rather healthy 328 horsepower as standard, the hybrid’s 50 kw electric motor bumps that figure up to 360. The Q50’s power delivery is smooth yet lively through the 7-speed automatic with adaptive shift control. What that means, is the car will learn your preferred driving style by the way you shift and it will start to shift based on the algorithm it picked up from you. To be honest, I didn’t really notice any real change when driving in regular automatic mode. 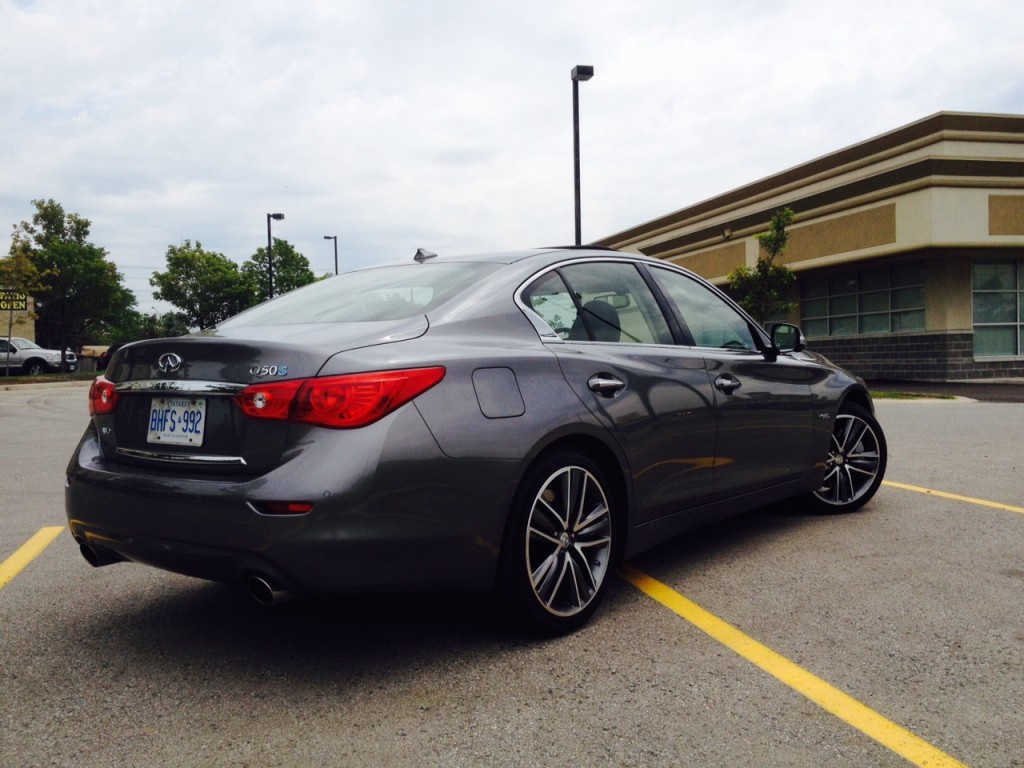 Steering also takes a more technical approach. The Q50 uses Infiniti’s new drive by wire steering system. Instead of a metal connector which runs through the shaft of the steering wheel to the front suspension, it uses electronic to do the job instead. It would of course be terrifying if that system fails, so Infiniti has incorporated the more traditional mechanical system as a back up. The advantage of the drive by wire system is that it can change steering inputs a lot quicker. Drive by wire systems are slowly becoming more common, however Infiniti can claim to be the first to offer it as standard on the Q50. While the idea of the system isn’t a bad one, I can’t see too many people actually realizing the benefits in their daily lives. That, and the drive by wire system has been known to fail in cold weather in about half a dozen Q50’s. That isn’t exactly an appealing idea for any Canadian owner who doesn’t live in Victoria. 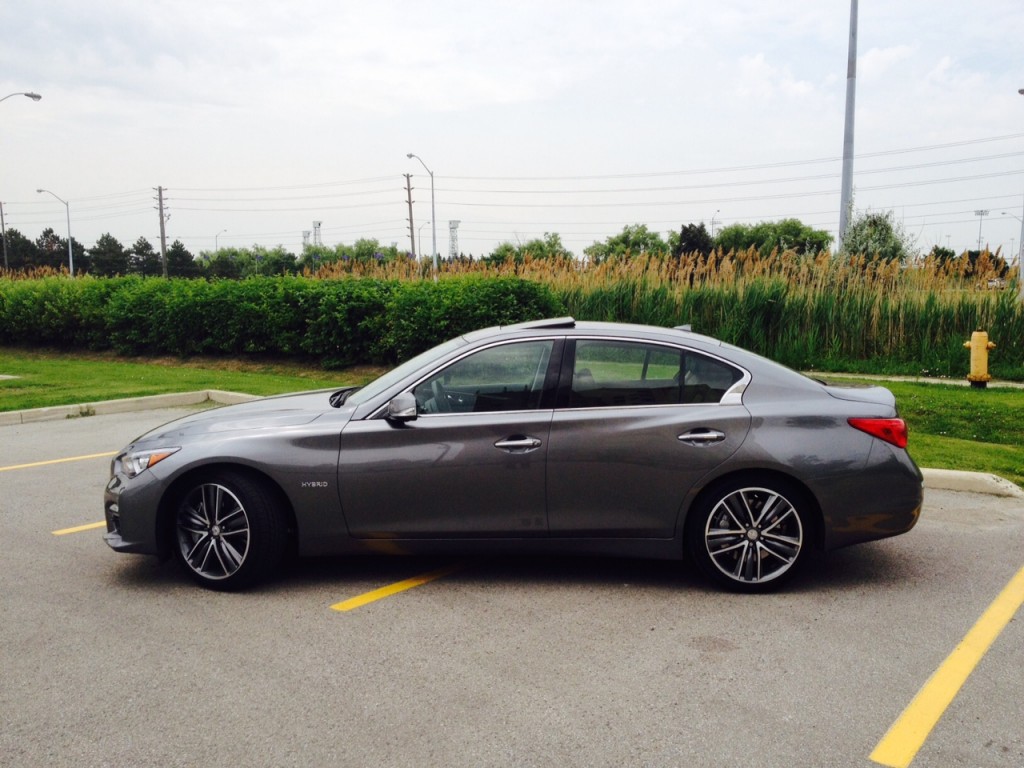 Luckily, I experienced no issues with the system and, in general, it works fine. The real story is how well it works in tandem with the all-wheel drive system and its general handling abilities. This thing can take a corner. It’s sharp and poised. If you go nuts and personalize everything to its most hardcore setting, you’ll find a sedan that seems more angry than anything else at taking a corner, all while still doing it well and with gusto. You’ll pay a comfort penalty if you do that, however. 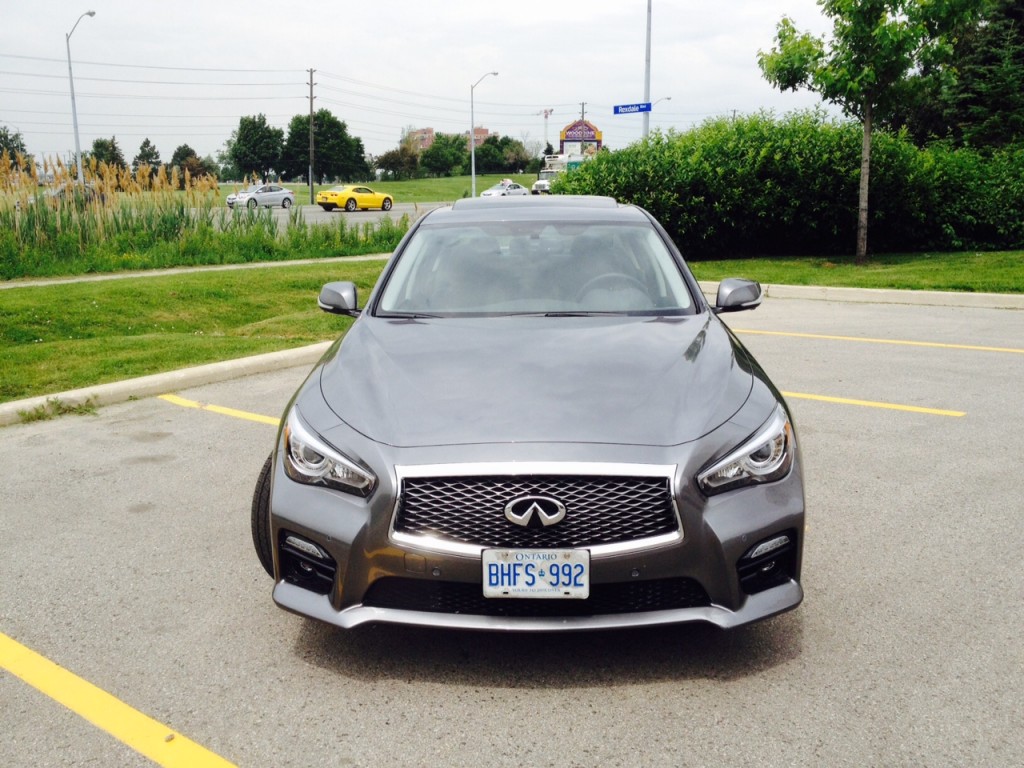 My gripe with the Q50 overall is an odd one. In practice, the Q50 does everything well, but I didn’t really feel much when I drove it. It seems to lack the charisma that the old G37 had. You could connect with that car in many levels. It was like Captain Picard from Star Trek TNG. But the new Q50 is more like Data. It can do everything brilliantly, but it does so without emotion or personality. 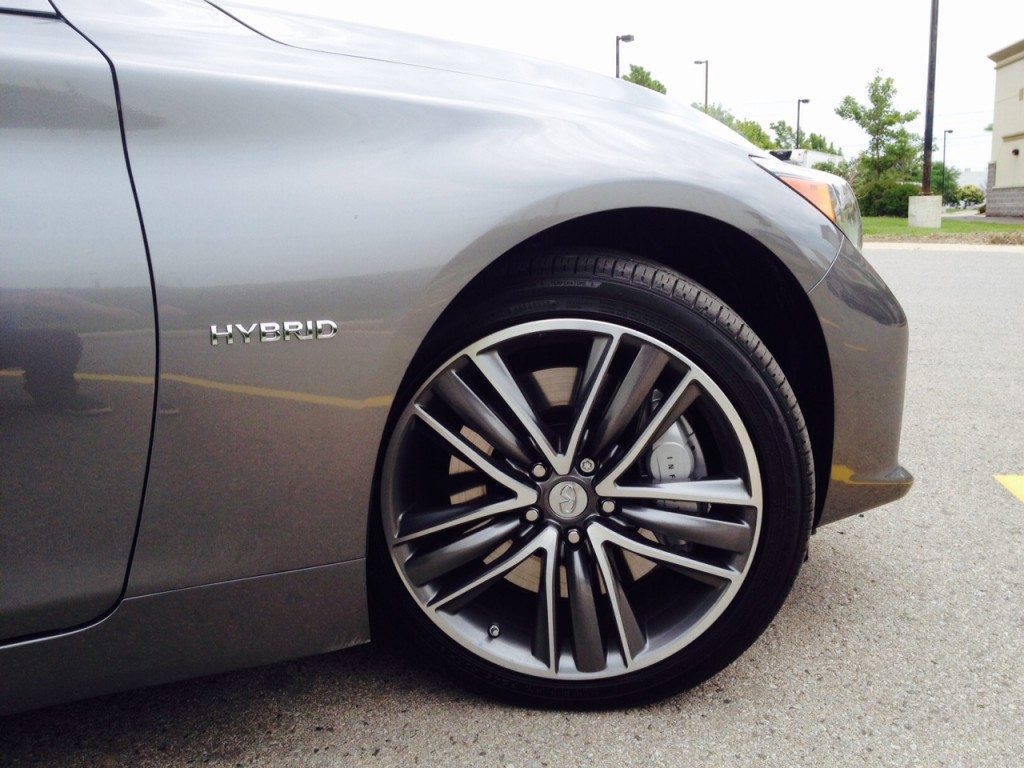 That may be the least of its worries though because if we go back to the Baldwin-Seinfeld interview, after Baldwin says he thinks he’s worked harder and hasn’t gotten as far, Seinfeld asks rather genuinely:

“Well what do you consider work?”

“Not walking into a room and everyone just falls down and worships you,” says Baldwin referring to Seinfeld’s more superior fame. 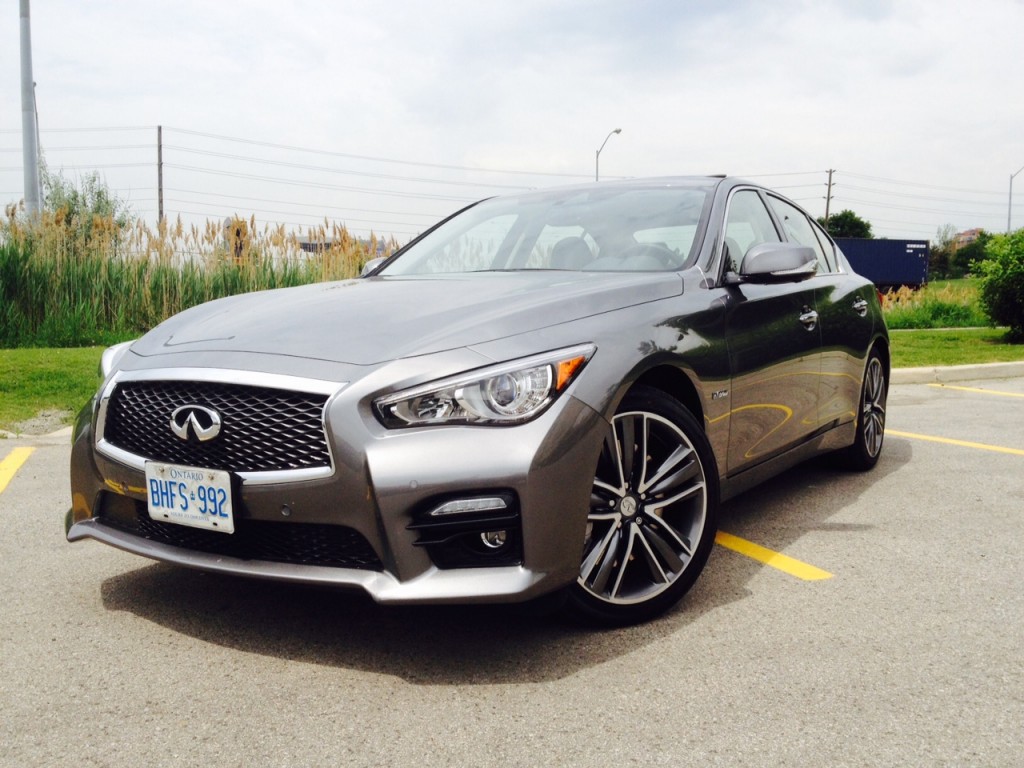 That’s right, if you haven’t figured it out yet, Seinfeld is the BMW 3-series and Baldwin is the Infiniti Q50. Everyone loves BMW because of what the brand represents, and they specifically want a 3-series, not just because it’s more affordable than most of BMW’s other models, but because it has a reputation of being the best. When people see a BMW 3-series, they drool. Much the same way people do whenever they see Seinfeld. The Q50 has worked very hard to get to where it is now, including adding more tech. But the 3-series consistently outsells the Q50, even though the Q50 is arguably the better performer. The 3-series also has name recognition. It has held some variation of the number 3 in all its models, whereas the Q50 is on its third name change in just two decades.

Seinfeld’s response to Baldwin was his most classic line and what he’s known for best:

That about sums it up, doesn’t it?