I always found the full-size car segment to be a bit interesting and a reason why is because most have sibling rivalry going on. That only really started to become the case once auto manufacturers decided that their mid-size sedans just were not big enough so they took the risk of encroaching on the territory of their own full size sedans by making them relatively the same size.

This caused some issues in my mind. Why would anyone pay a premium price for a Nissan Maxima when the V6 Altima would likely do the trick for both size and power and costs less? Same deal with the Taurus and the Fusion.

Hyundai is a company that has three products competing against each other. There’s the full-size Genesis sedan, as well as their ‘premium’ entry Azera (which us Canadians do not get on our shores) and the now full-size shaped Sonata.

Recently I tried the Genesis 3.8 Technology and walked away quite impressed. I even gave it a nick name. So I had big hopes for the fully redesigned Sonata, however, in its full loaded trim level, I started to wonder if it would make my love for the Genesis a bit redundant.

I drove one to find out. 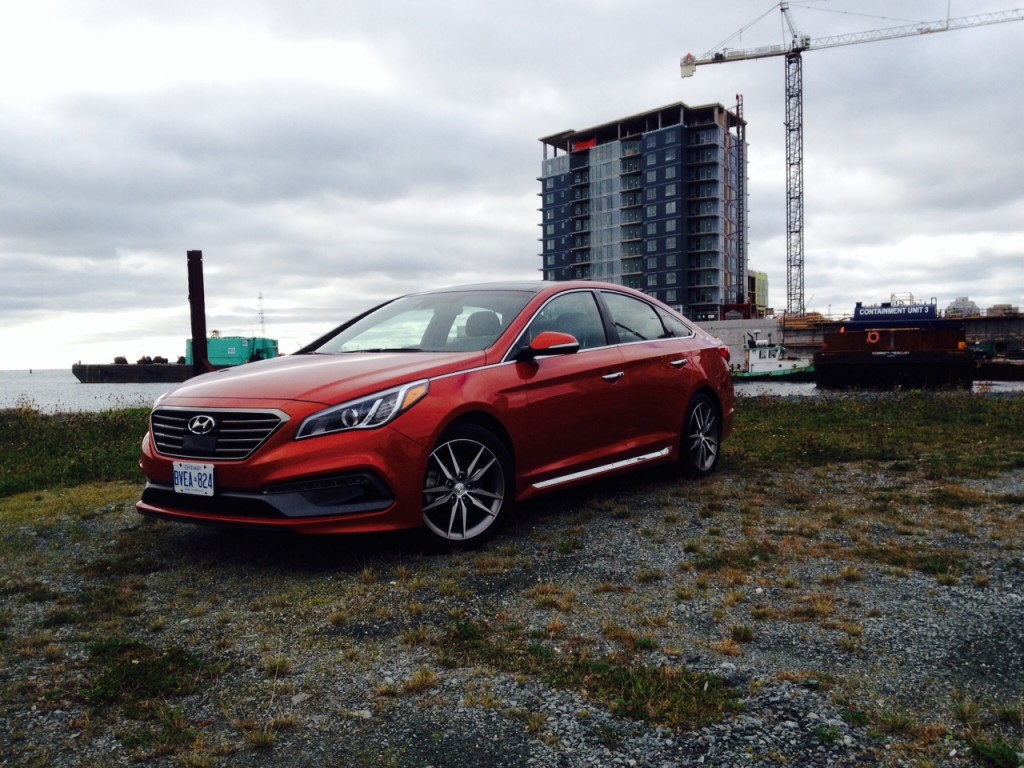 I called out the exterior styling of the previous generation Sonata. I didn’t like it. I thought Hyundai was trying entirely too hard to make something that was a head turner and I knew those swoopy lines would not age well. While styling is entirely subjective, I’d like to think I was correct in my assessment. Moreover, the updated 2015 Sonata styling could be now considered a bit conservative thanks to the previous generation Sonata. This is either a good thing or a bad thing depending on your tastes, however if you do prefer a bit more flair, the Sonata turbo gets rather nice looking 18 inch wheels (so nice that my mother even commented on them. And she never notices anything like that), a lip spoiler, and a rather long chrome-like strip which makes its way from the head lights all the way to the rear. The latter felt exceedingly tacky to me but no more so than the quad tailpipe design. Really? Quad pipes for a 2.0 litre 4-cylinder? Borderline obnoxious LED daytime running lights complete the look-at-me styling. Overall I like it better than the previous generation, however the Sonata comes dangerously close to looking a bit gaudy unlike the rather handsome yet eye catching looks of the Genesis. 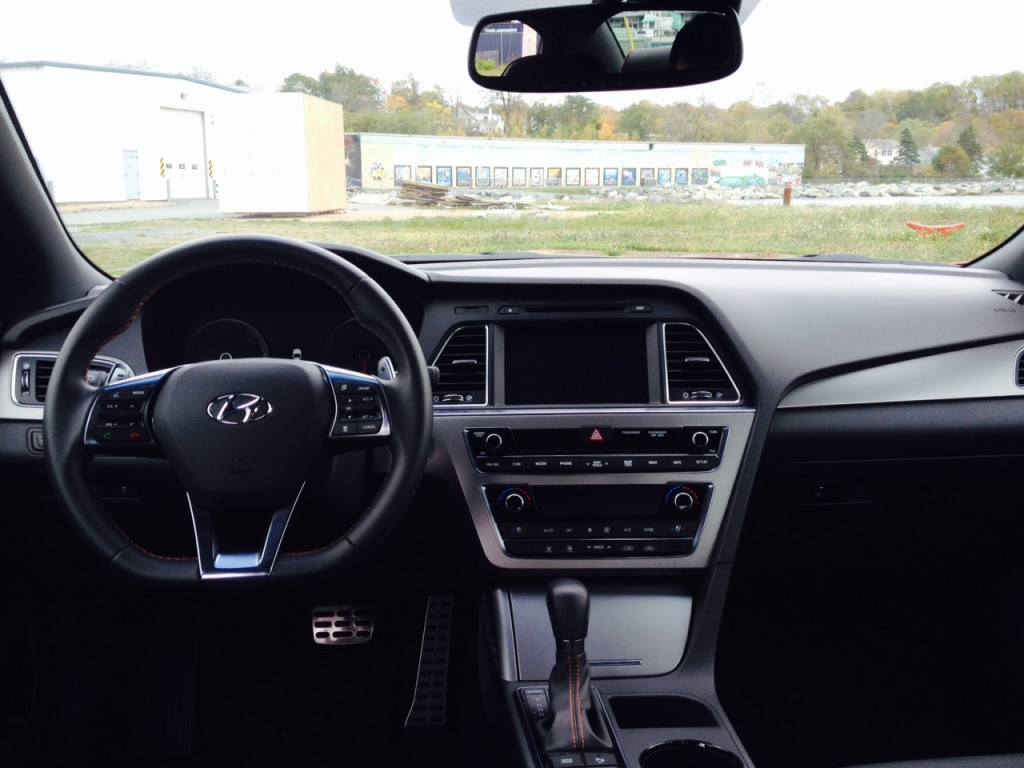 Inside, my tester had orange piping around the leather bucket seats which also have ‘turbo’ embedded in them. You know, in case you forget which engine you opted for when you first bought it. Notwithstanding the turbo nonsense on the seats, the interior is fantastic. The Sonata gets its own wheel design (kudos to Hyundai for not tacking on the typical wheel) which is a three spoke form, flat bottomed steering wheel. I love flat bottomed steering wheels! 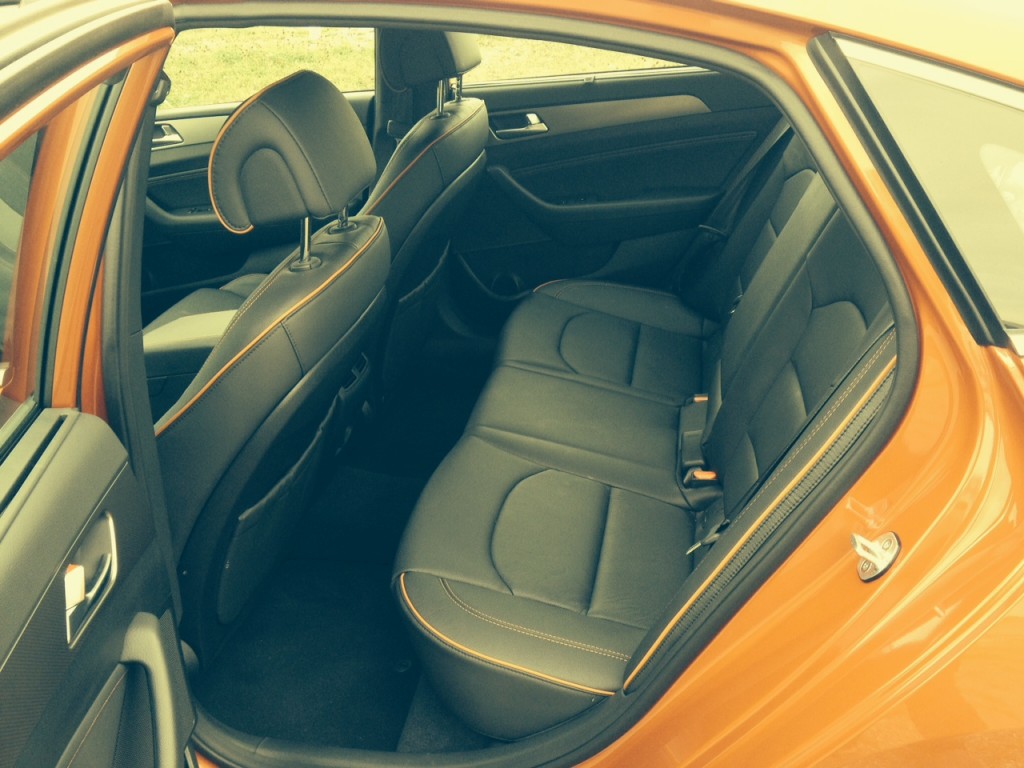 The Sonata Turbo nets itself a whole lot of good stuff also found on the Genesis such as heated and cooled seats, adaptive cruise control (which worked quite well), an 8 inch touch screen, a panoramic sunroof and a whole lot more. It now has the same centre stack design as the Genesis which is very much a good thing. The only bad thing is, like the Genesis, the volume knob and climate control knob are identical in size and located too close together. 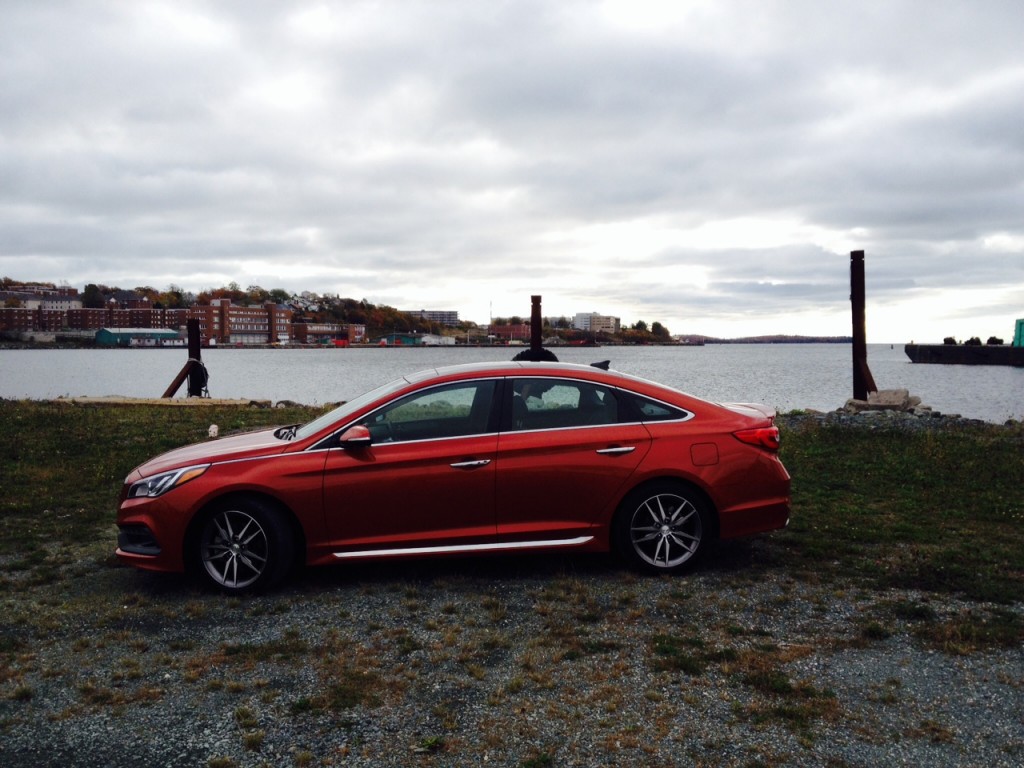 But interior space is not a problem and although it doesn’t feel quite as spacious as the Genesis, it isn’t too far off. Likewise, the trunk can swallow a whole heap of stuff without any fuss. Speaking of the trunk, it now features a hands-free ability to access it, for those times when kitty litter is on sale and you embarrassingly clean out the entire aisle and yes, this is clearly just a hypothetical situation. If the Sonata’s doors are locked and you have the key fob on your person, all you need to do is stand behind the trunk for about 3 seconds and the trunk will open itself. This seems like a brilliant idea on paper, but in practice there are a few issues. 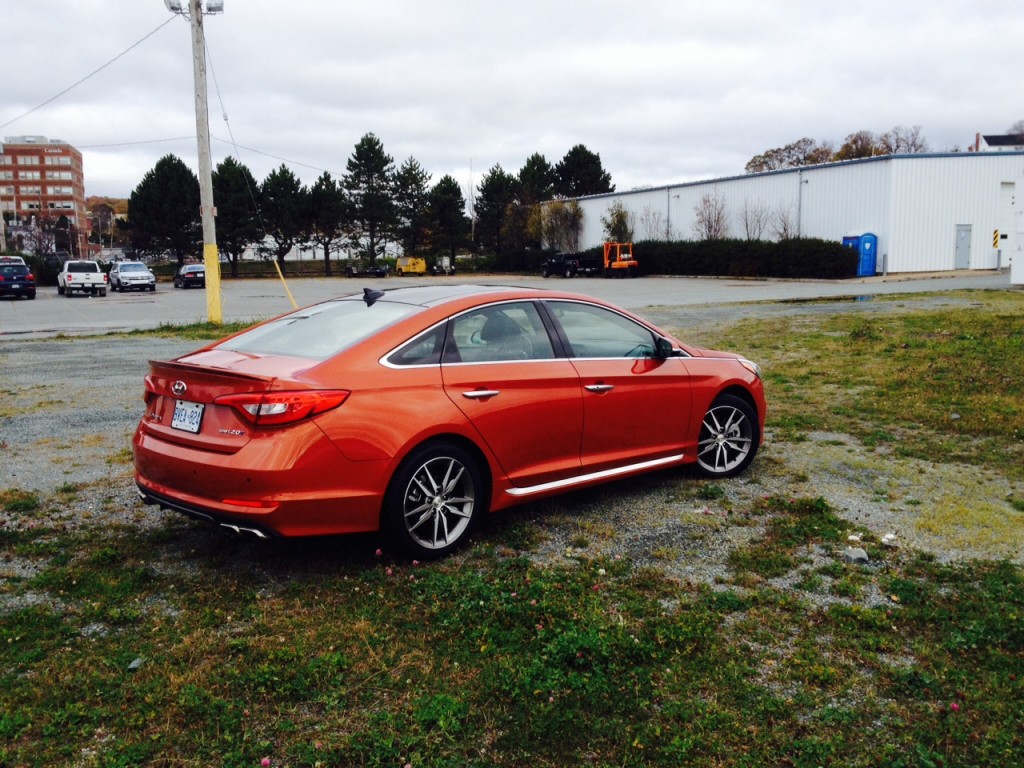 Firstly, the about half the time the trunk will open and you are free to put all your cat litter inside. But the other half of the time, the system simply unlatches the trunk lid and it doesn’t swing open. This causes you to put down all your bags of cat litter anyway. Secondly, the system opened the trunk when I didn’t want it to on two separate occasions. The first time I was emptying compost into the compost bin which was located next to the backed in Sonata in my driveway. The second time was when I ran into a friend in a parking lot and we were catching up behind the Sonata when it rudely interrupted with a series of beeps, flashing lights and eventually the trunk lid opened to expose the embarrassing amount of cat litter I had purchased for all the world to see (I knew you didn’t believe it was a hypothetical situation, so might as well fess up).  This unintentional opening of the trunk is not only bad news if you are a murderer, but it’s also a tad risky if it opens and you do not realize. Ford’s kicking motion for opening the trunk hands free may make you look a tad insane but at least it’s doing what it’s asked when it’s asked. 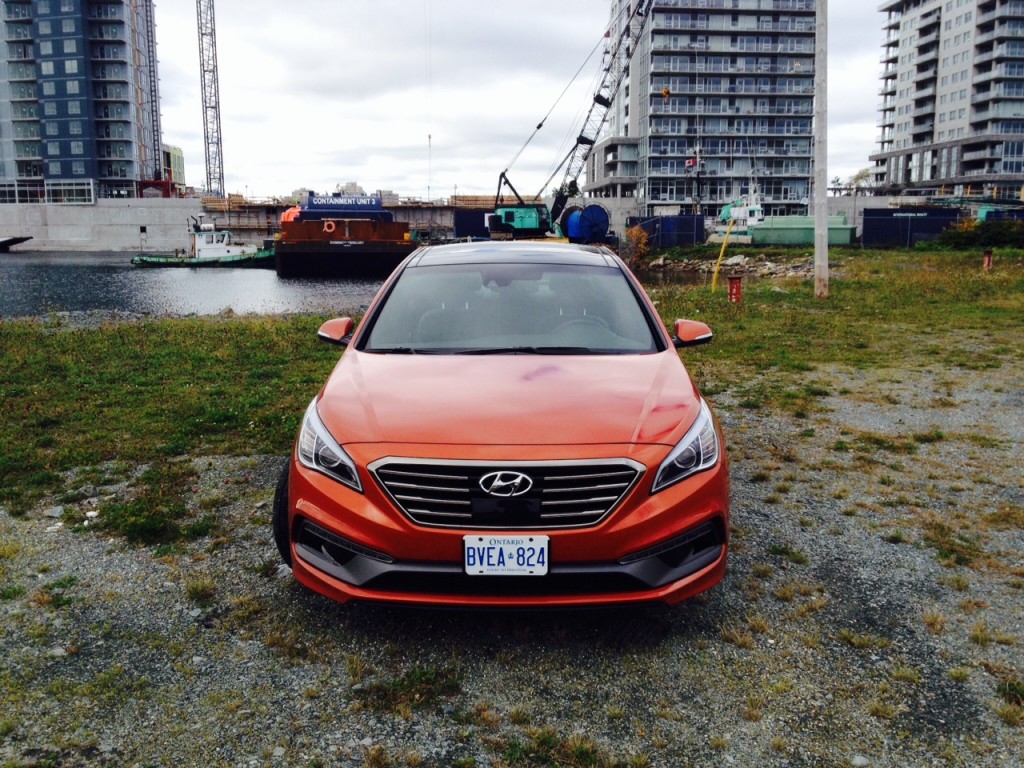 Now, onto the engine. If you are anything like Jeremy Clarkson then you’ll be disappointed to learn that the new Sonata turbo makes less power than the outgoing model which used to churn out 274 horsepower and 265 pound foot torque. The new unit now produces 245 horsepower and 260 pound foot toque. I did not have the opportunity to try the previous generation Sonata turbo so I am not able to comment on if there’s a noticeable difference, but I will say the new Sonata Turbo offers plenty of pick-up that will satisfy most driving tastes, even though it’s apparently a second slower from 0-100 (eight seconds versus seven seconds). Still, the turbo spools up quite quickly to give lots of low end power, and once you hit north of 100 km/h you’ll start to notice a bit of a snarly exhaust note coming from those unnecessary quad pipes. It is of course nowhere near the sound or power that the Genesis generates, but you definitely will not be left behind when passing. 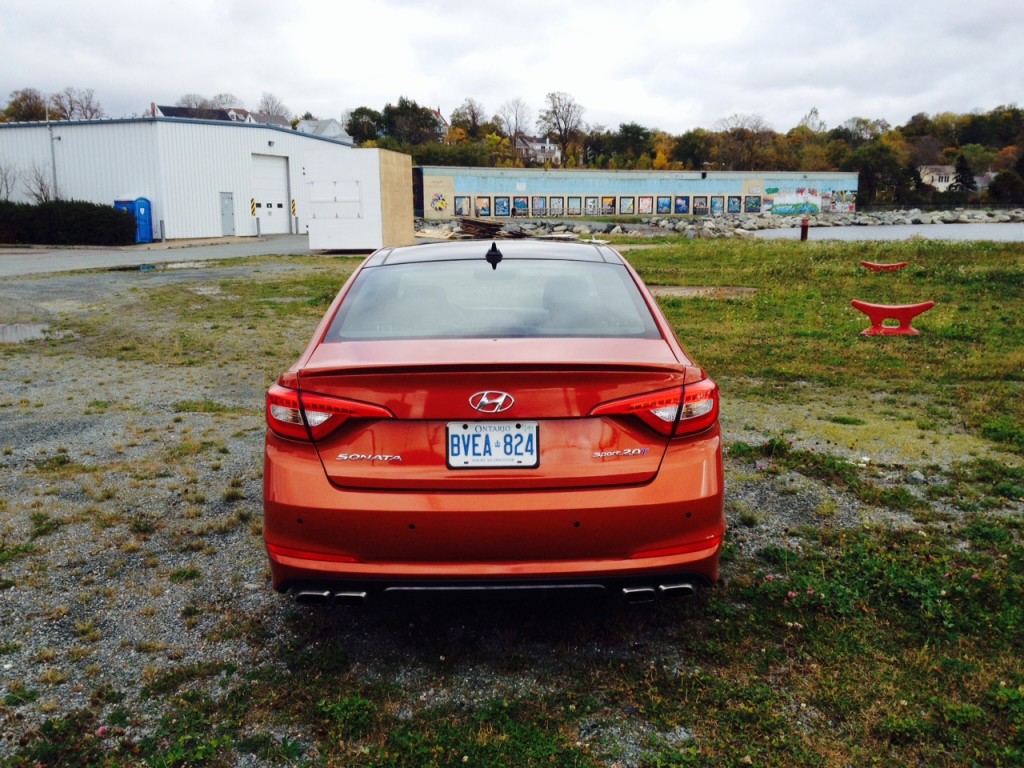 While the Sonata will keep up on the highway, it doesn’t quite have the solid feeling of say the Passat or the Sonata. That isn’t to say the Sonata feels unmanageable, it just feels very light but not necessarily in a good way. The good news is those fancy goodies to keep you front crashing into the person in front of you or changing lanes into someone next to you give you decent peace of mind as they work quite well. 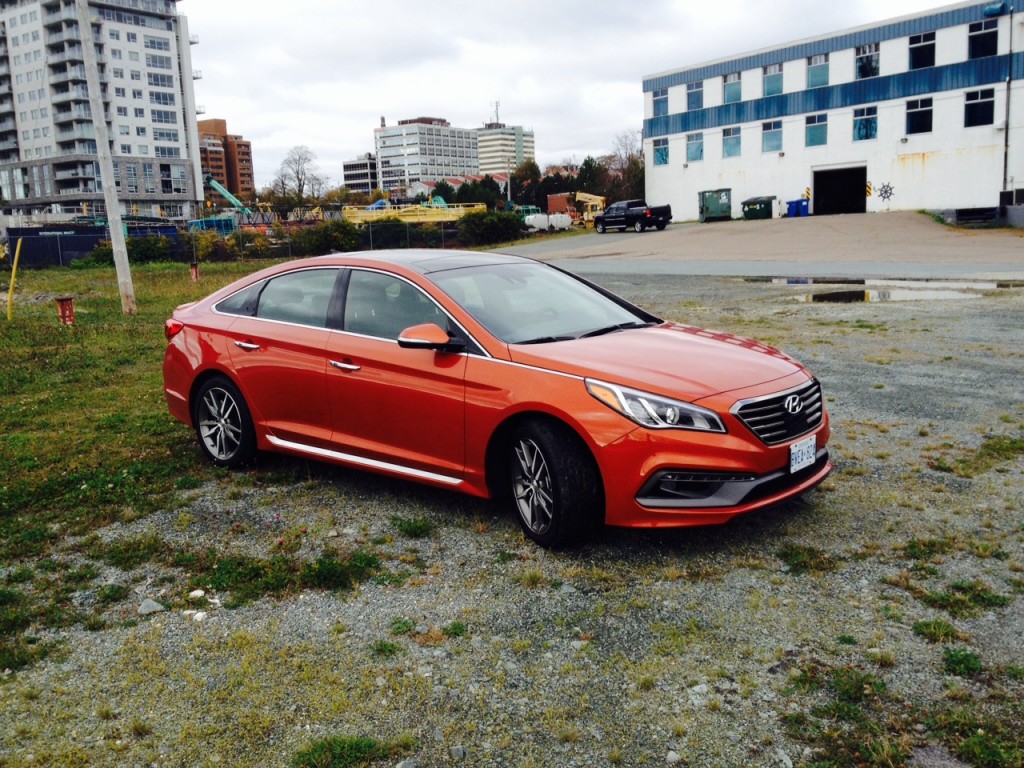 Given the Turbo’s sporting nature, I would expect the transmission to be a bit less dull. It does the job fine in normal driving, however once you get a sudden boost of testosterone, it seems to lag with each passing gearshift, even when you’re shifting yourself through the paddles. Going into sport mode doesn’t help, it just delays gear changes so you get inch closer to the red line. 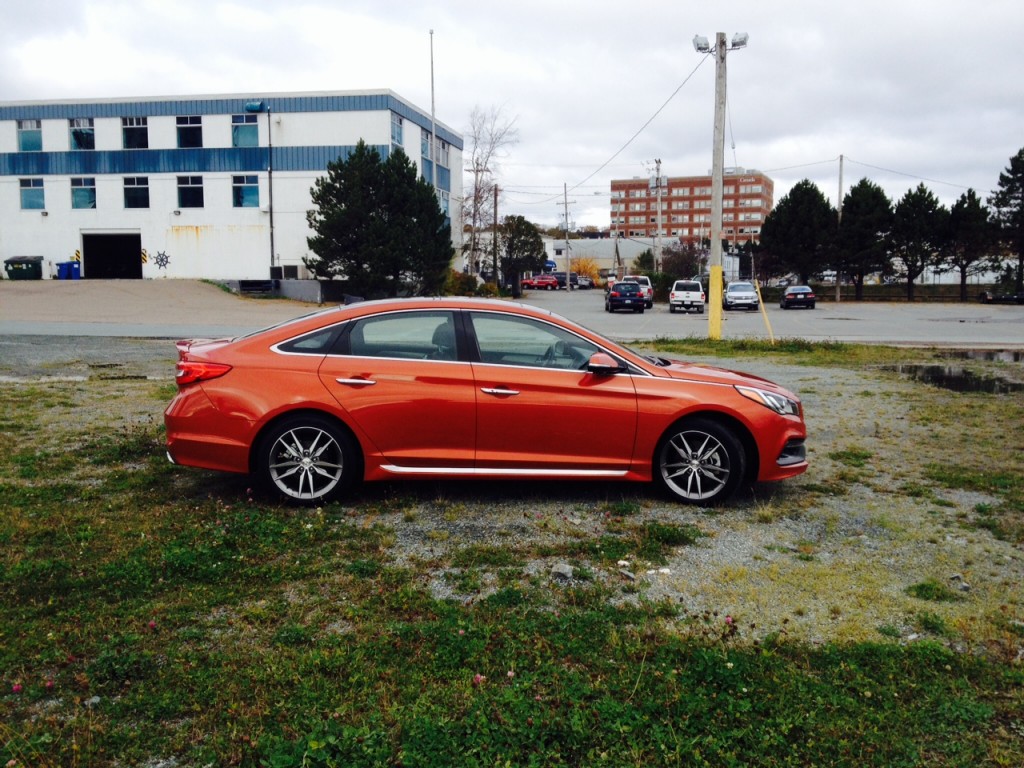 The Sonata Turbo is officially rated at 10.0 L/100 kms city and 6.3 L/100 kms highway. My real world consumption came in at 14.1 L/100 kms which isn’t good at all, however I’d say 85% of my driving was city and I did end up pushing the Sonata rather hard for most of the week, mostly because that low end torque is so addictive. If you do more highway driving and keep it in eco mode more often than not, I’m confident you’d be able to hit the official ratings. 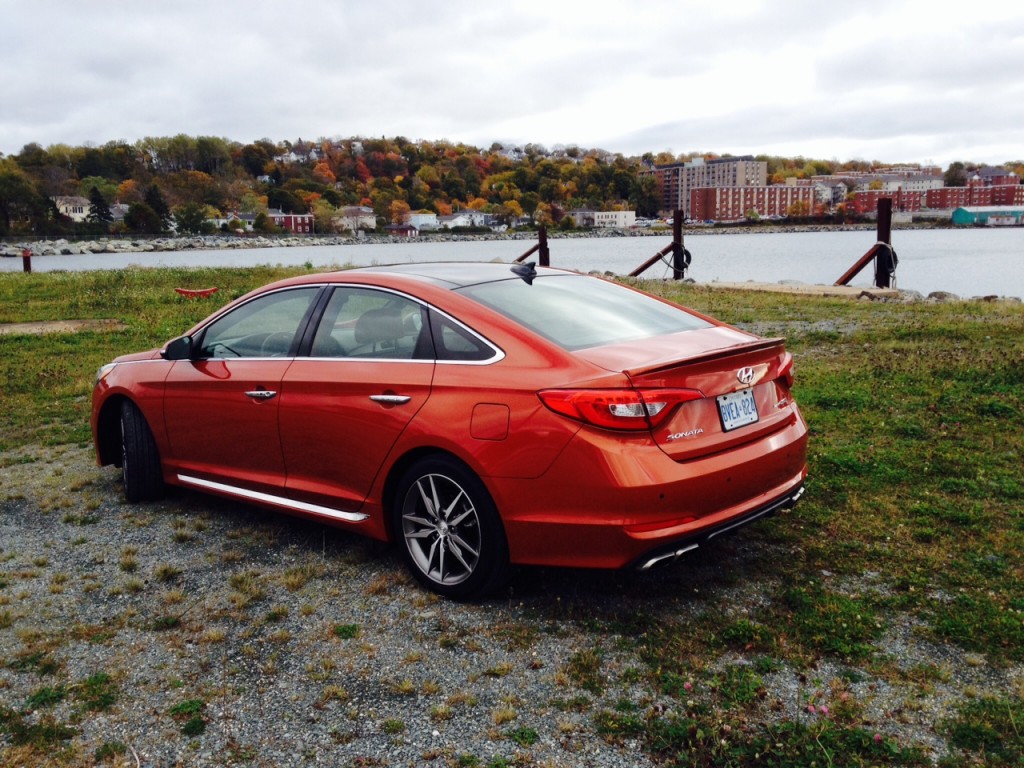 The steering feel is a hell of a lot improved over Hyundai’s older system and they thankfully ditched the “choose your steering feel” option which was one of the most useless options ever fitted to a car. The Sonata Turbo’s steering now has a rack mounted power steering system and steering firms up in the corners and becomes lighter at slower speeds. This puts the steering of the Sonata back on par of where it should be, however it still lacks feedback to the driver and there were a few points where I found myself over correcting, although that could be due to the under steer when taking a hard corner. The Sonata feels planted enough for the most part, but it is no track star. 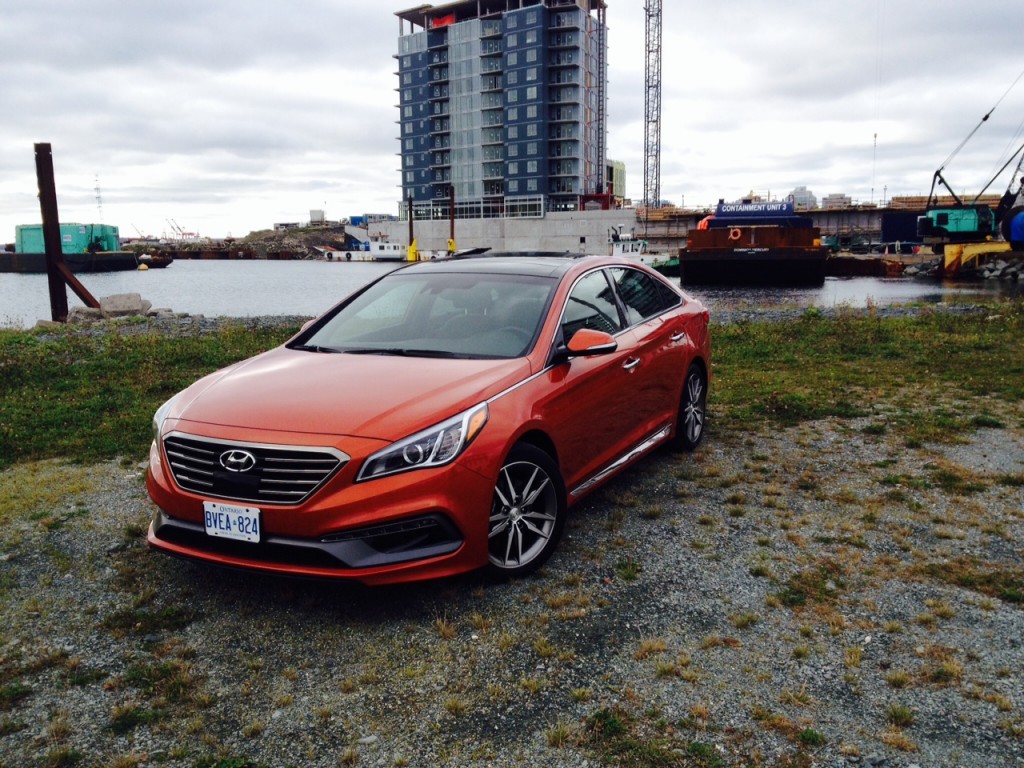 I was wowed by the Genesis, but not so much wowed with the Sonata Turbo. That’s not to say it’s a bad car, far from it. It certainly has what it takes to play with the likes of the Camry, Accord and Fusion, however it seemed to lack a bit of soul.  But one thing is for sure, the Sonata Turbo, like the Genesis, offers exceptional value in the ‘mid-size sedan segment’ and the new one is improved upon the old one in almost every way. And that may be just all it needs to stay relevant and keep snagging away sales from the big boys.