I looked up to see the short heavy set gentleman, filling up his previous generation Chevy Colorado, smiling my way after shooting his cryptic question my way at the pumps.

After taking a moment to try to compute what he was referring to, I asked him to clarify.

“Is it Justin Bieber? Or maybe Barack Obama?” he shot back, again with a cheeky grin.

Then it dawned on me. This wasn’t the first time the GMC Yukon Denali I was driving for a week was mistaken for a high profile government transport vehicle or a chauffeur for a celebrity.

GM had sent the fully loaded tester in black with black tinted windows and the optional 22-inch wheels. I expected it to garner a few stares, but I didn’t expect it to get as much attention as it did. 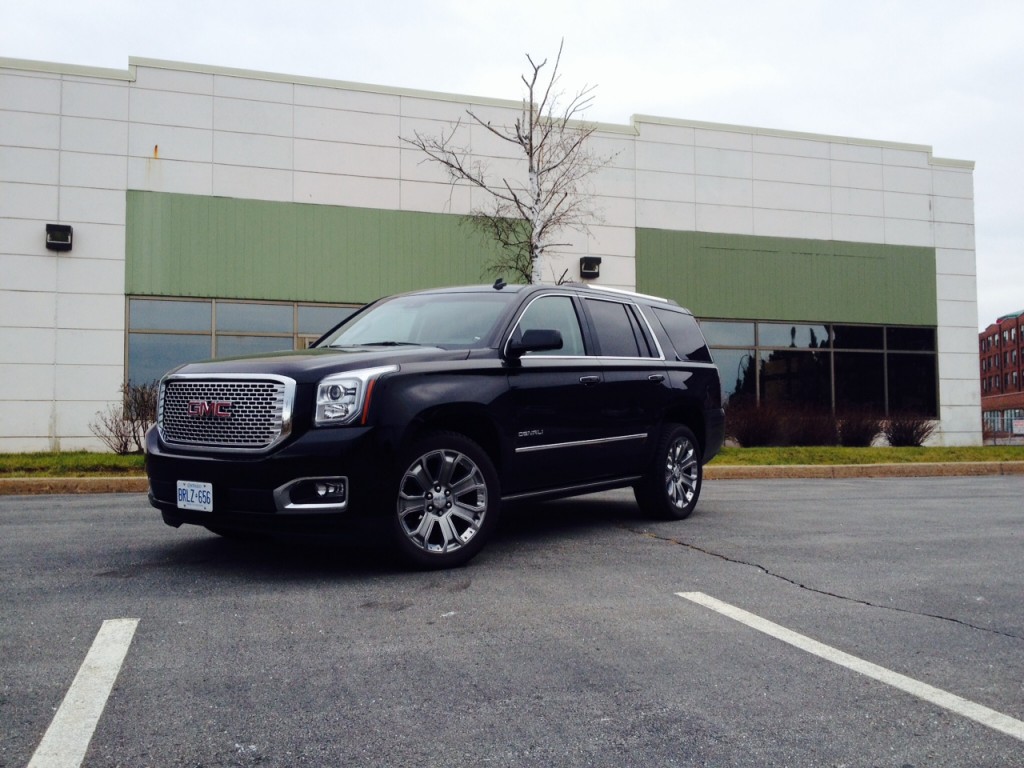 It’s little wonder as to why. New for the 2015 model year, GM has treated all three of their full-size SUV’s to even more style and bling. My tester in Denali form added even more style with the aforementioned optional 22-inch wheels, which certainly helped it to stand out. But as my girlfriend commented, the massive wheels look like they “just fit perfectly” without seeming too large thanks to the Yukon’s overall mass. 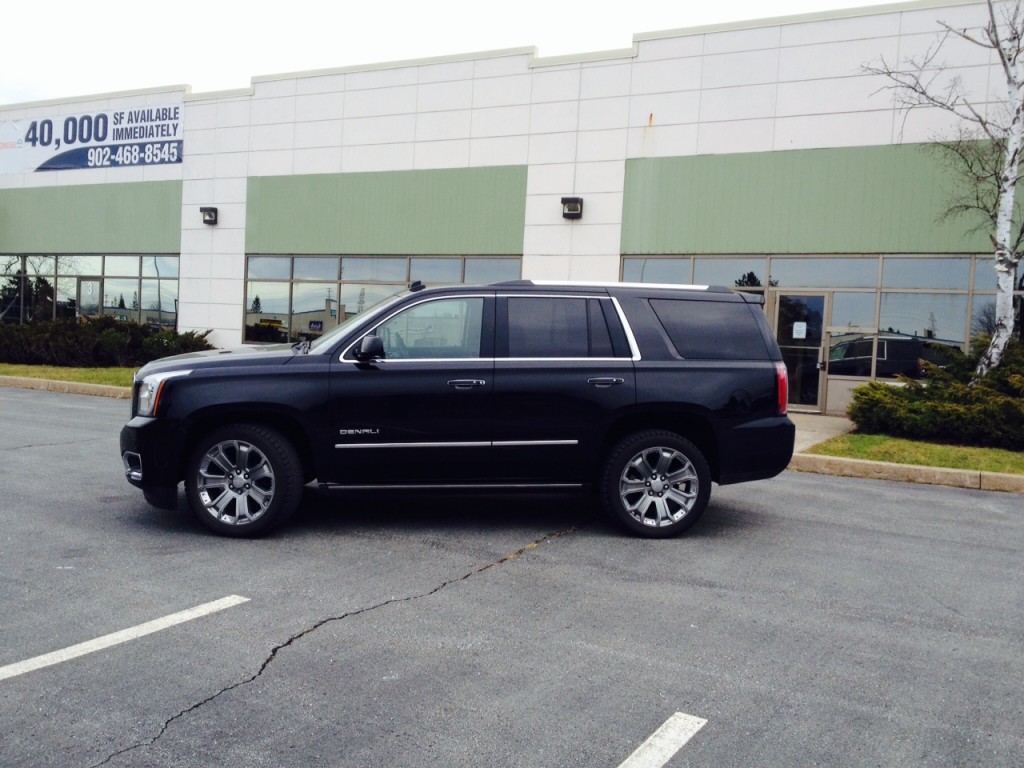 The Denali will also net you a unique and massive chrome grill with a pattern that isn’t quite mesh, but more akin to what you’d see on an electric razor. The rear end is menacing purely due to its overall size and squared off shape. Matched with LED daytime running lights, LED turn signals both front and rear, and a rather clever step bar that automatically tucks itself away when not in use, and you’ve got yourself one good looking truck that any celebrity would be happy to keep in their driveway. 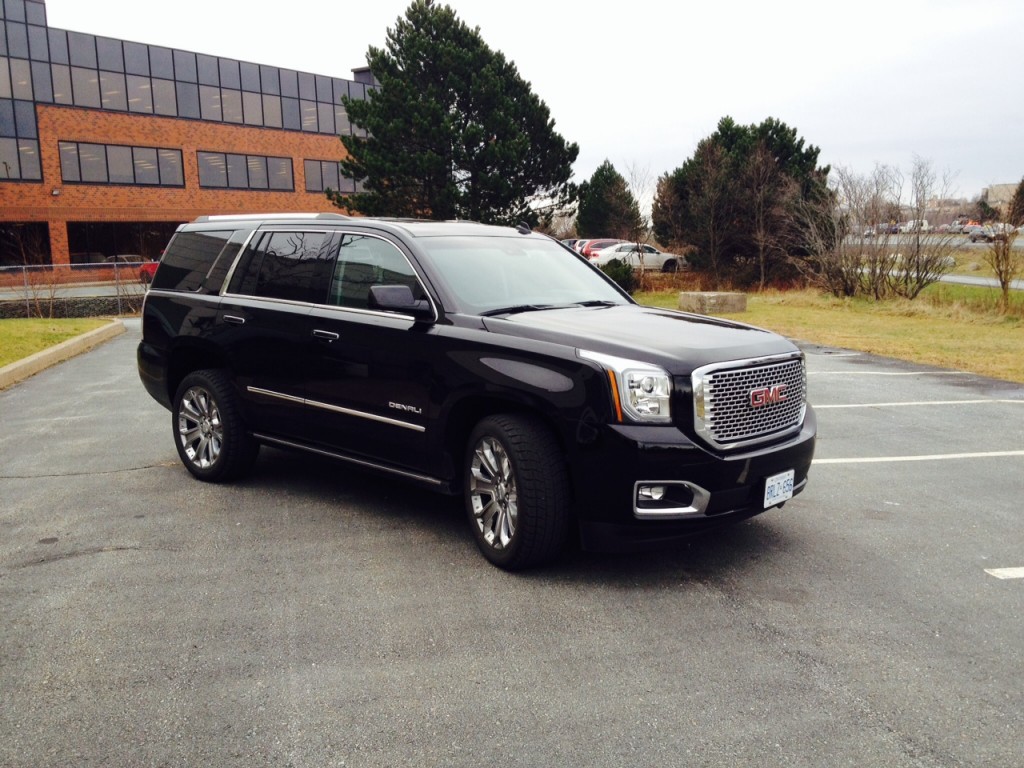 The interior will likely leave most GM skeptics surprised. The redesign is much more on par with the classy exterior looks. Sure, the interior is recycled on the Yukon’s two brothers but it still gets its own unique touches such as white and red gauges for the speedometer and tachometer along with a small unique information screen in between. Otherwise the design is fairly similar, however fit and finish is now where it should be on a vehicle in this price range. Speaking of, the Yukon Denali finally gets push button start – something that should have been added a long time ago to the top trim level at least. 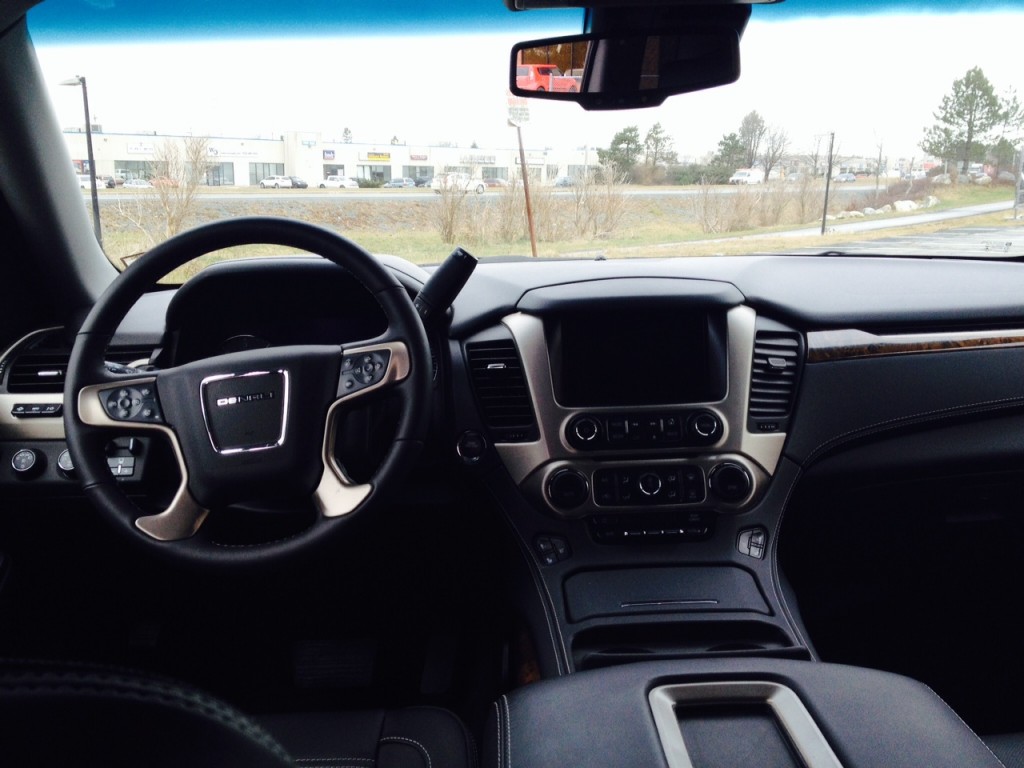 The front bucket seats provide decent comfort and support, while a massive armrest does its job equally well. The centre console could easily swallow your laptop with room to spare. The driver and front passenger get two mode heated seats; you can opt to have just the bottom cushion heated, or both the bottom and back support cushion heated. There are also cooled seats but with temperatures holding steady at -8 degrees C for most of the week, this author opted not to test them out. 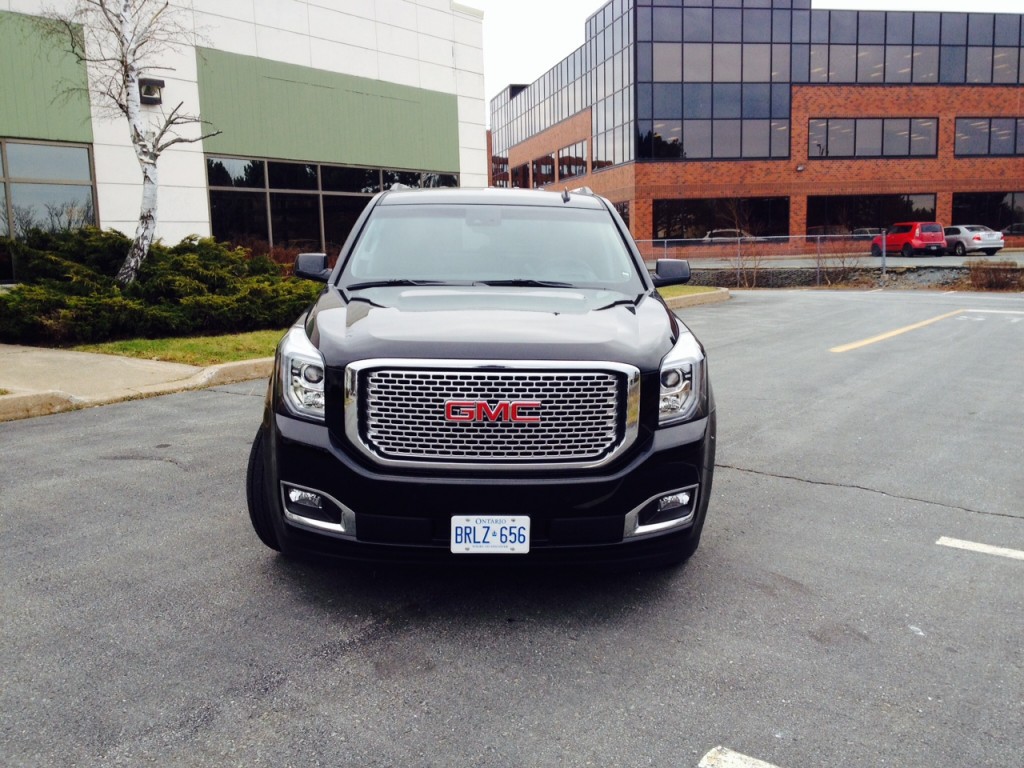 The second row passengers also get treated to heated seats, though there is no two-mode option. However, they do get their own climate controls which are found on the back of the centre console. The third row passengers don’t get any goodies and that’s likely due to the fact that, despite the Yukon’s overall size, there still isn’t heaps of legroom back there. The third row is definitely best suited to children who still get a commanding view of the rather large fold down screen which can play DVD’s for long trips. 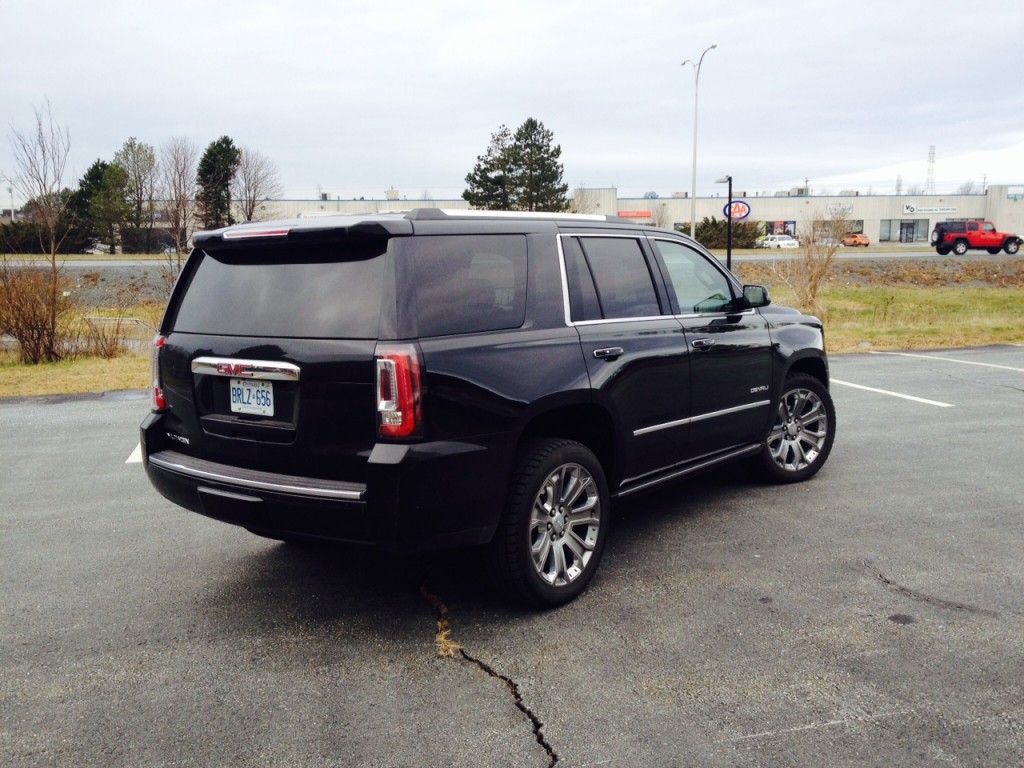 Folding the seats is easier than taking a nap. All you need to do is push the buttons located behind the third row, accessible when the tailgate is open, and ta daa! Both the second and third row seats will fold flat automatically. But that isn’t even the most impressive part. The seats can also fold back up automatically as well.

“This is entertainment for days,” commented a good friend who could not stop folding them down then subsequently back up again all to repeat the cycle again several times. If a 28 year old can be wowed this easily, think of what actual children would think. 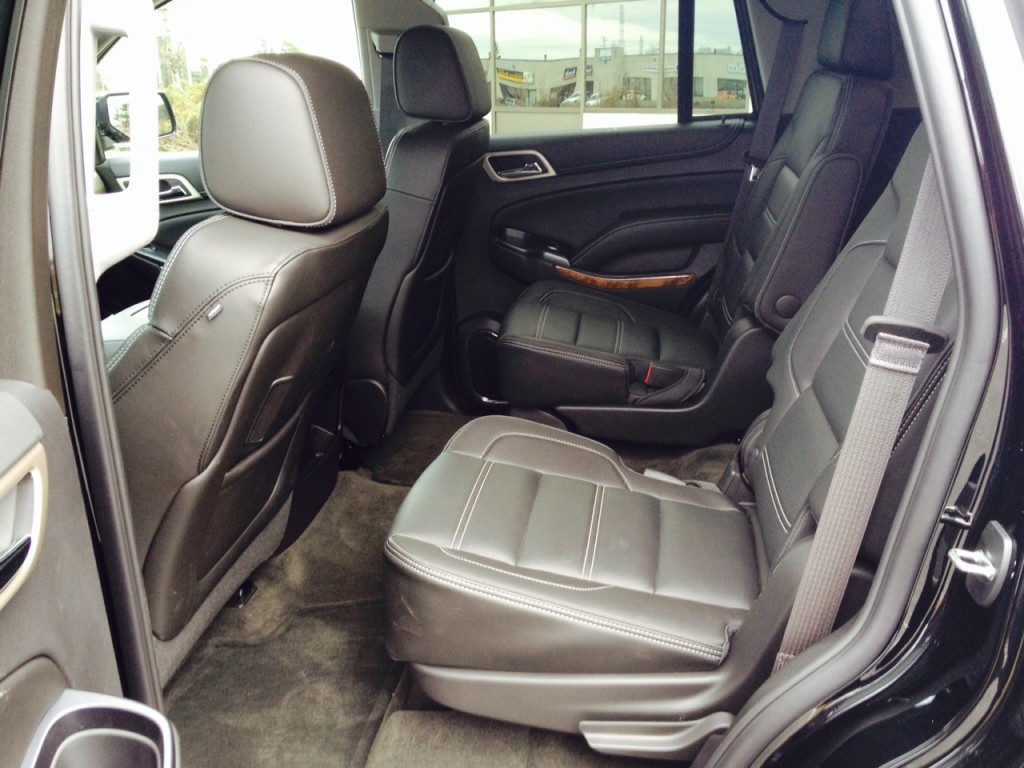 Even though you get a completely flat load floor with the second and third row seats folded down, there is a bit of an issue in loading large, tall objects. This was proven when I offered to use the Yukon to pick up a new standard-size freezer my parents had ordered so they could save paying the delivery fee. Well, the freezer didn’t fit. I know, how could that be possible when the Yukon itself is so large? Well it’s because the load floor has been lifted by about two-three inches in order to, ironically, create more leg room for the third row passengers (I say ironically because they are still mostly only suitable for children) and to create cubby holes for your knick knacks and paddy whacks. Thinking the large packing and Styrofoam may be taking up most of the room, we actually unpacked it and tried to put the freezer in without it. It still didn’t work, much to the obvious pleasure of a gentleman driving a Ford Ranger asked “well, what’s the point of something this big then?” as he watched us struggle to cram the freezer in. The Yukon does come in XL form, however I am not sure if the load floor height would be any different. 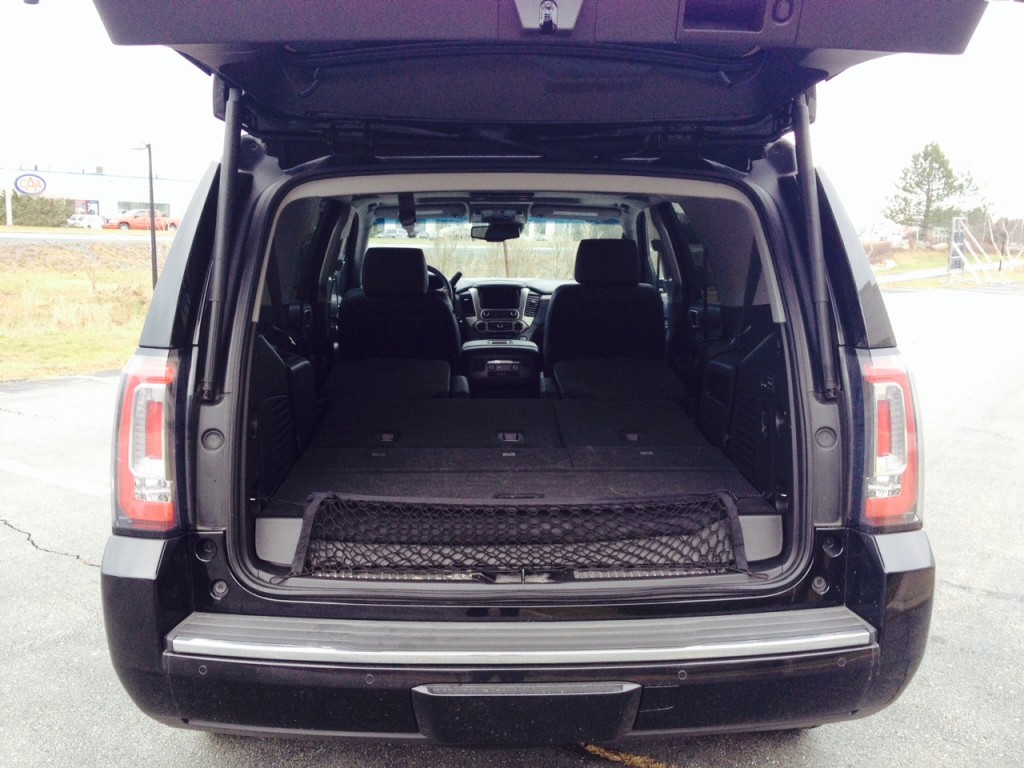 The Denali gets GMC’s 6.2 L naturally aspirated V8 which is unique to the Denali trim. It produces 420 horsepower and 460 pound-foot torque and is mated to a six-speed automatic. It uses variable valve timing along with direct injection. It also incorporates cylinder deactivation for reduced fuel consumption while driving on the highway. You may be asking yourself if this is the same unit found in the new Corvette and you’d be right, however the Denali’s unit is tuned a bit differently. As you can imagine, pick up is plentiful as is the growl from the engine when pushed, but be prepared to pay for it (literally) when you do. Fuel consumption is rated at 16.2 L/100 kms city and 11.4 L/100 kms highway. I was able to manage 18.7 L/100 kms in real world mixed driving. 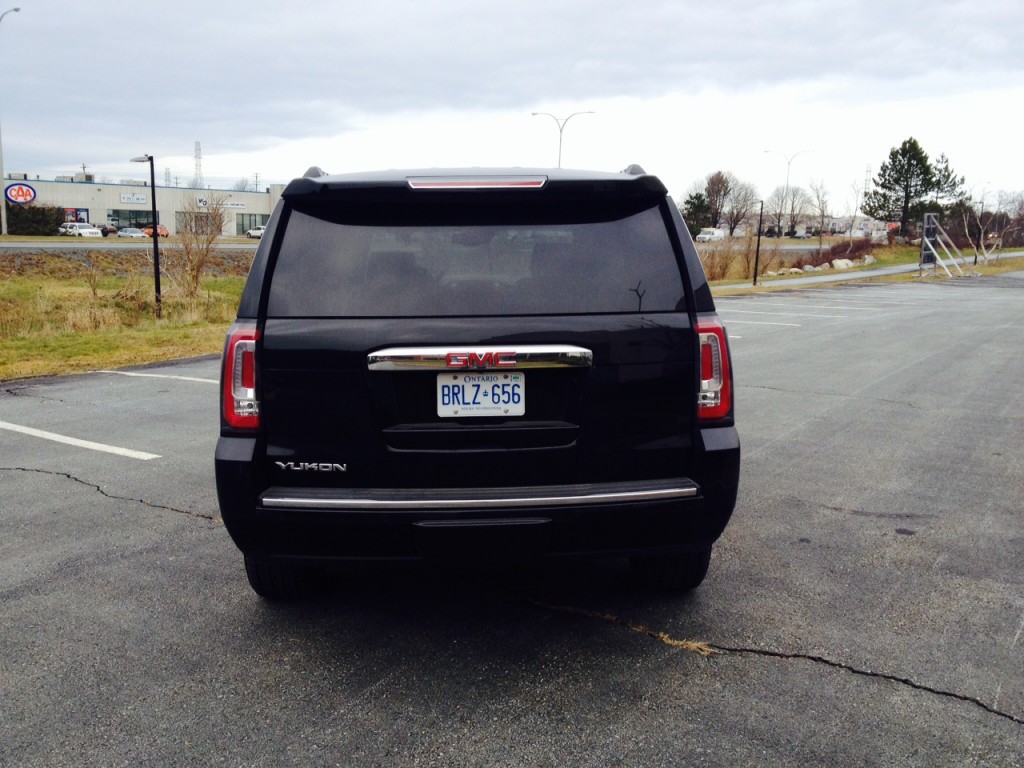 But the real story is the noticeable amount of torque over the 5.3 L V8 found in lower trim levels. As a result, the Denali feels quicker than it actually is and there is more than enough power for passing on the highway. Part of the reason why people buy vehicles in this class is for their towing abilities and all that torque means the Denali can tow up to 8,000 pounds, which is impressive. 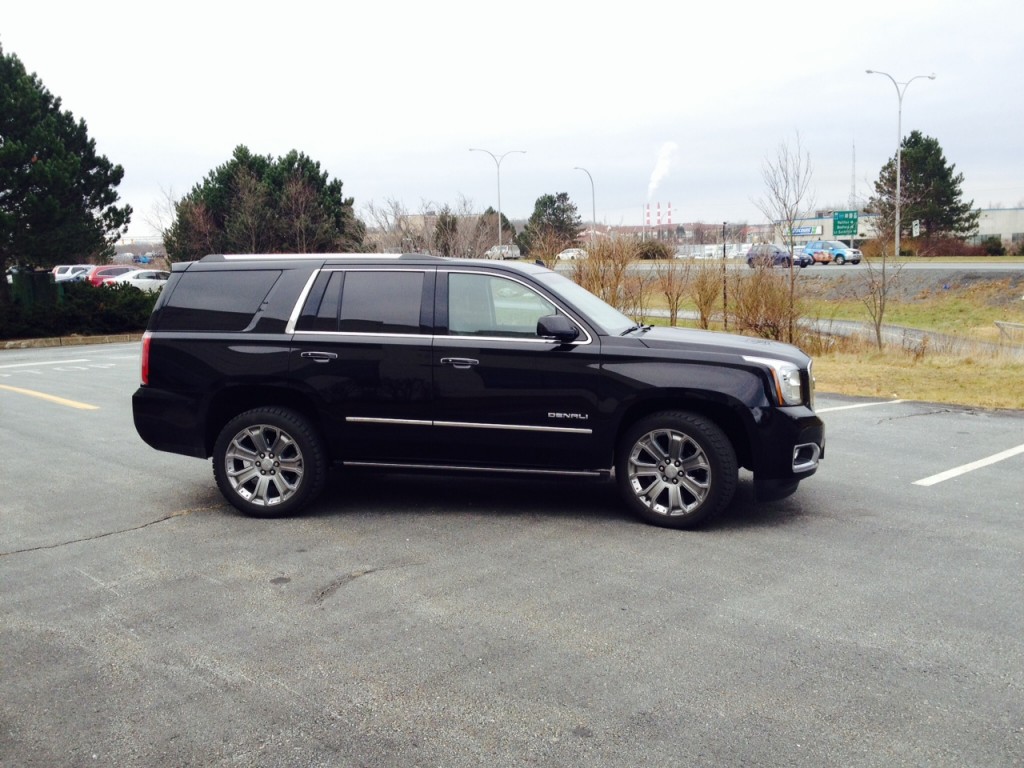 Driving the Yukon around town is very much like driving a yacht on the streets. It does take some getting used to, but as with most SUV’s, you do get a commanding view of the road which people behind you will not get. Driving the Yukon is a bit like standing up in a crowded movie theater. Sure, you get a better view, but being so inconsiderate to others behind you is a bit embarrassing. 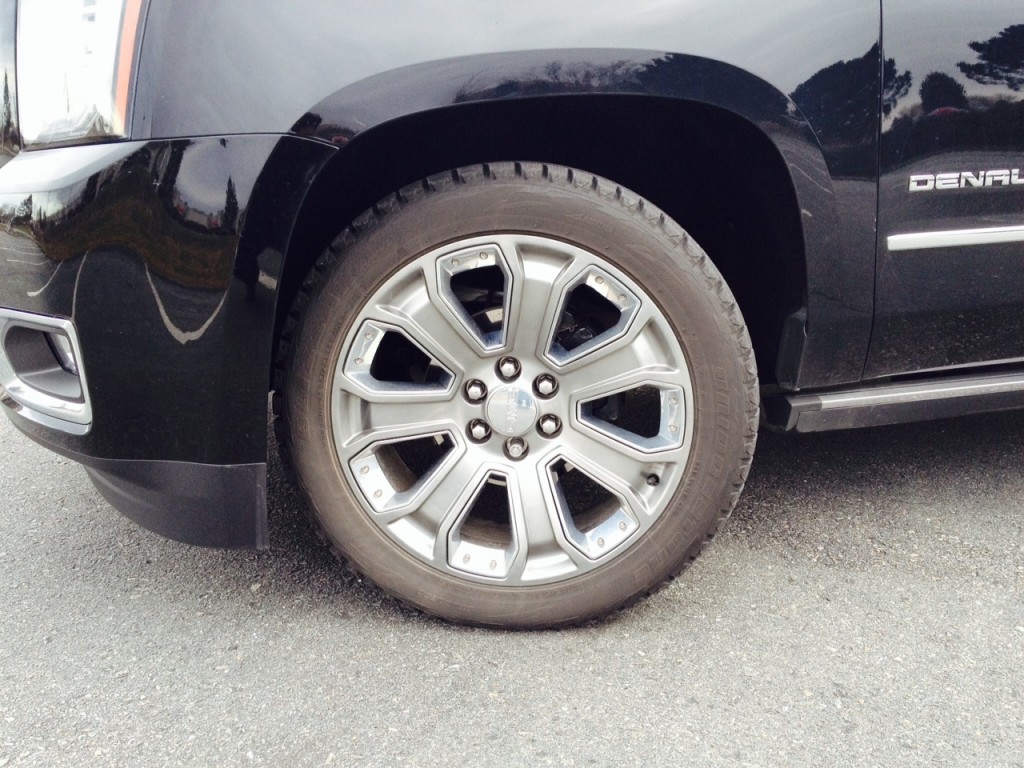 The Denali version of the Yukon weighs in a a hefty 5,700 pounds. As a result, driving around corners requires extra care. If you take a corner too quickly, the Yukon will punish you with mass amounts of body roll and under steer. You really do need to slow down so the laws of physics can prevent you from ending up in your neighbours lawn. With that said, the massive 22-inch wheels and GM’s upgraded suspension makes for relatively competent handling abilities at regular speeds.

There is an aura of refinement and finesse with how the Yukon feels on the road. As good as the Tahoe is at giving a comfortable and cushy ride, the Denali raises that bar even higher – so much so that it may even rival the Cadillac Escalade in terms of a comfortable and luxurious ride. Road noise is tempered and quiet despite those large wheels.

The Denali is equipped with all the latest in safety technology such as a rather nice heads-up display, adaptive cruise control, forward collision warning, blind spot information warning and lane departure warning. It also has cross traffic alert, where the sensors pick up any moving objects approaching from either side of the vehicle while in reverse, though it alerts the driver in a bit of an odd way. Along with beeping noises, the Yukon’s seat will vibrate the side of the bolster from which the object is coming from, giving your buttocks a brief little massage. If you’re backing out from a driveway onto a busy street then you’ll get a longer butt massage. 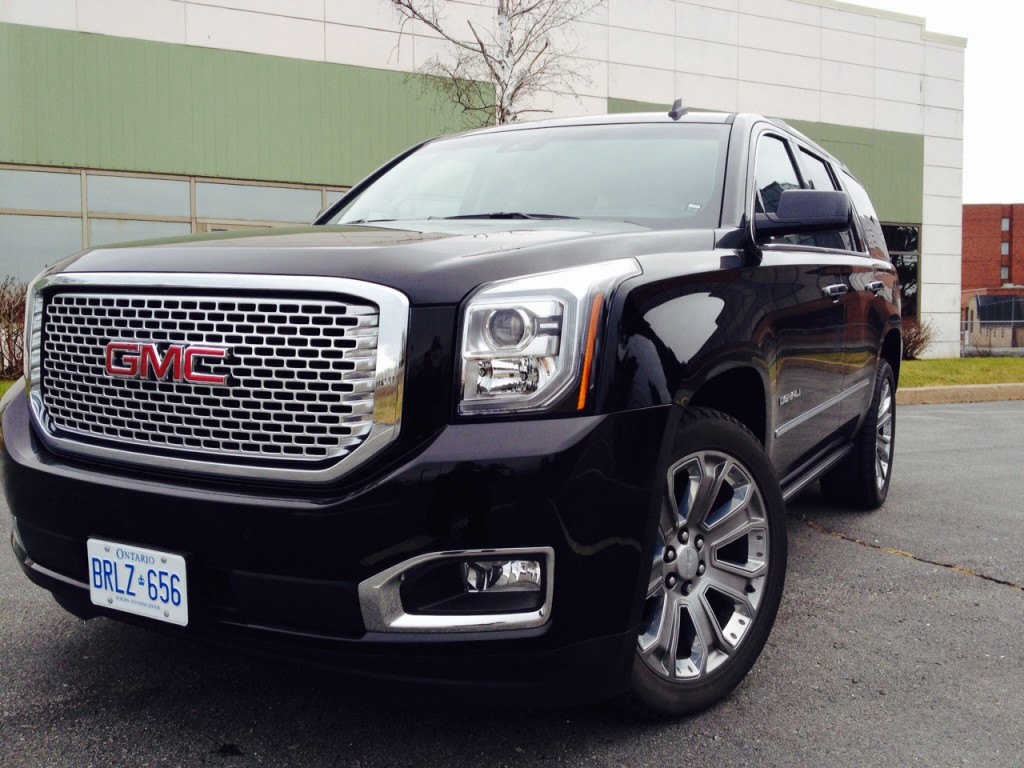 This new Denali finally puts GM in as a credible contender in the full-size luxury segment. It’s now good enough to compete with the likes of the Mercedes-Benz GL-class however it is able to deliver a lot of the same features in a much more affordable package.

And best of all? You can trick people into thinking you’ve got Justin Bieber in the back. Wait, that’s likely a bad thing.