When Ford introduced the sixth generation Mustang last year, muscle car enthusiasts of every stripe were prepared to march into Ford’s corporate headquarters in Dearborn, Michigan with pitchforks.

The angry mob wasn’t upset about an unfavourable design change or a the introduction of a pink colour scheme, rather it was what Ford had introduced in the engine bay: a four cylinder engine.

While I am far from a muscle car fan, in a way I did somewhat understand why it might have prevented Mustang aficionados from being able to sleep at night.

Regardless of your opinion of muscle cars, they are part of a very small but significant segment of North American culture. They have historic backing and represent the youth of those pesky baby boomers. And back in their day, muscle cars were cheap cars with massive V8’s and a body style that would make most women swoon. Conversely, it also made men swoon whenever they saw a woman drive by in a muscle car, as there was a fair amount of estrogen-laden owners as well. 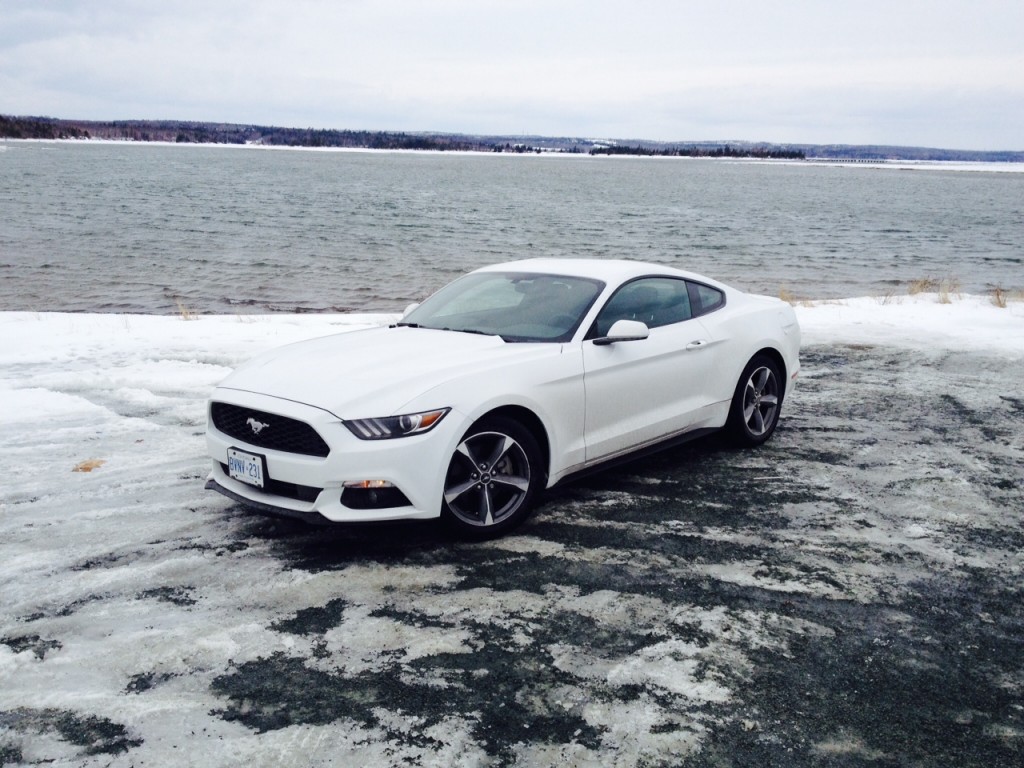 It represented freedom, it represented style, it represented North America. While other countries in the rest of the world could not understand the brash, unrefined nature of muscle cars, they still remained an object of desire abroad never the less.

For Mustang fans, it was bad enough that Ford had commercialized the Mustang back in the 90’s and added a V6, but this seemingly was going too far.

But then, Ford released the specs. It was a 2.3 litre Ecoboost (which is Ford lingo for turbocharged) 4 cylinder which produced 310 horsepower and 320 pound foot torque all while returning 9.2 L/100 kms fuel consumption combined. Those numbers certainly tamed the angry mob, but some were still skeptical.

The 4-banger under the long hood really stole everyone’s attention, but in addition to the newly introduced 4-cylinder and the beloved V8, Ford decided to carry the V6 over as well.

As a result, it now rests as the ‘base’ engine option and likely, the most forgotten of all the Mustang models out there. Does it still have what it takes to be a credible option in the muscle car market or will the angry mob eventually become more accepting of the 4-cylinder? 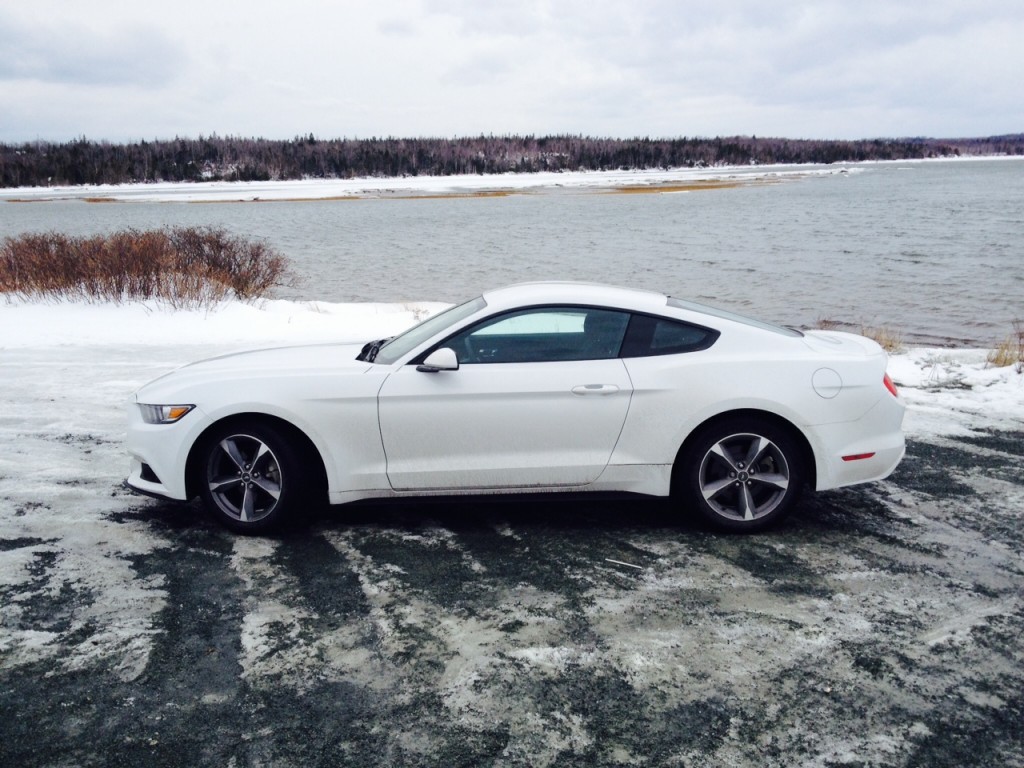 New for 2015 is a brand new exterior design which, in my mind, encompasses an excellent dose of modernism with retro style. Some believe the previous generation Mustang was the best looking to date and while I don’t necessarily disagree that it is a looker, the new design incorporates a bit more family DNA which is a good thing. The front end takes styling cues from the Fusion and as a result has a much cleaner, more polished look. Out back you’ll find the traditional three-bar tail lights, and yes, they do still incorporate sequential turn signals. There are no Ford badges to be found anywhere on the car because, well, they’re just not needed. This is a Mustang after all. It’s legendary. And I think Ford did a great job of modernizing the look all while paying homage to its roots. 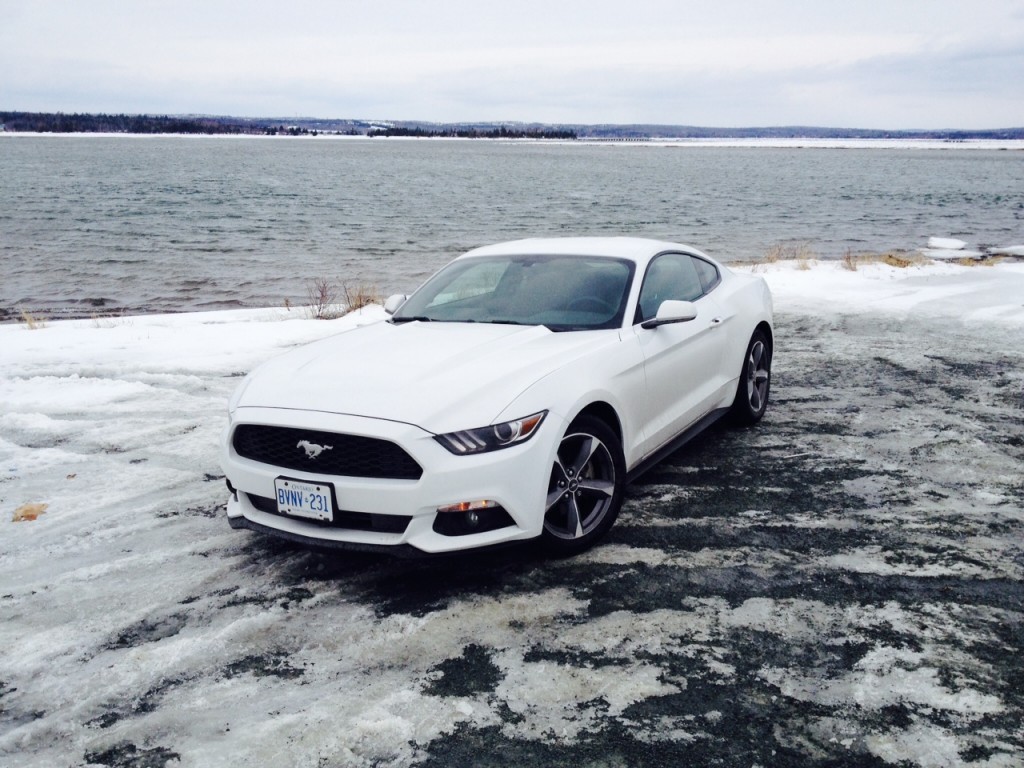 Mustangs have always fallen a bit short when it came to interior design but I’m happy to say that this iteration is the best yet. It’s decidedly retro but with a layout that makes much better sense and with materials that feel is if they belong on a car. But it retains a simplistic design that baby boomers would likely expect and there are no fancy gadgets or gizmos, no screens popping out of the dash or beeps or buzzes. It’s actually a refreshing place to be. 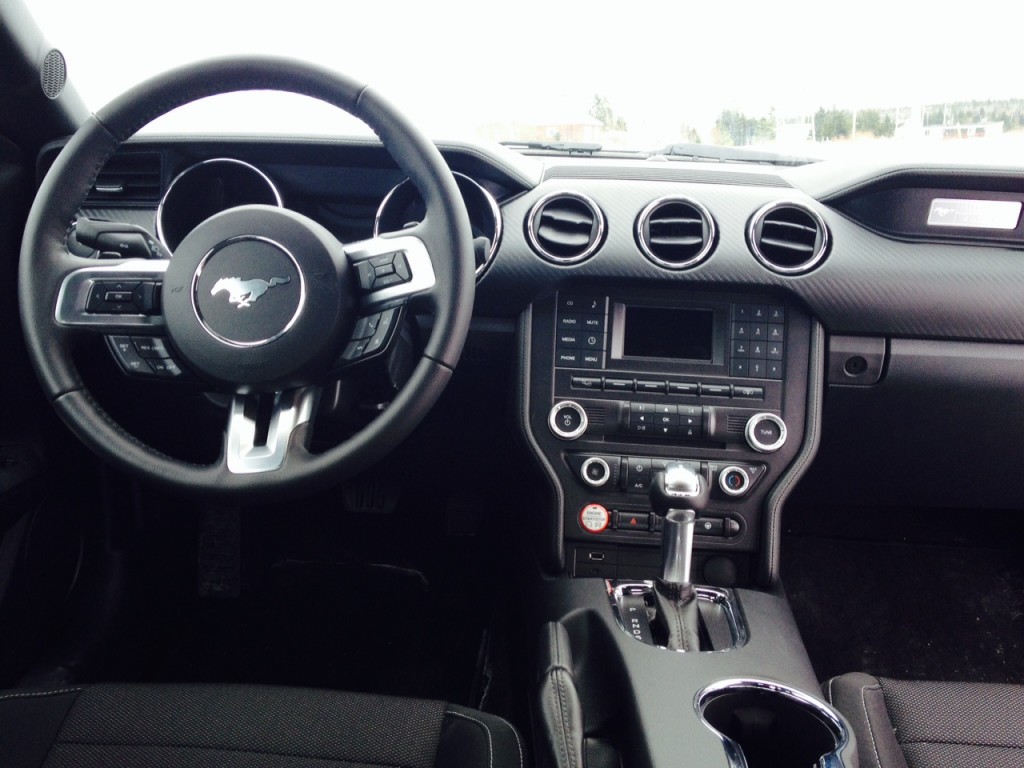 With that said, it does feel like you’re sitting in a cave. Despite the mass of the Mustang overall, it does not translate into mass amounts of room. The back seats are virtually unusable and with no sunroof available on any Mustang, not even as an option, the claustrophobic tendencies start to kick in. 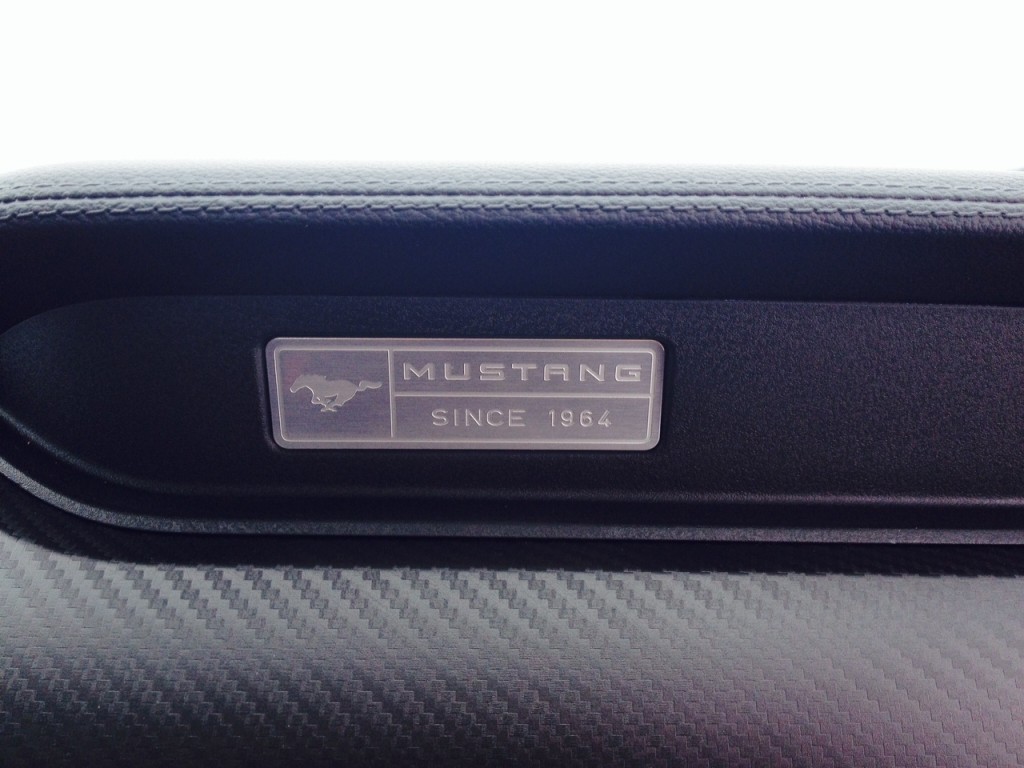 The Mustang offers a spacious trunk but with a very narrow opening, rendering it useless to haul anything that is big and non-flexible. This is a bit of a shame as we were unable to haul a standard piece of dry wall in the trunk. I know, I know, people don’t buy Mustang’s to haul stuff, but if you’re going to make a trunk that big unusable, then maybe take some trunk space away and add interior space. Just a thought. 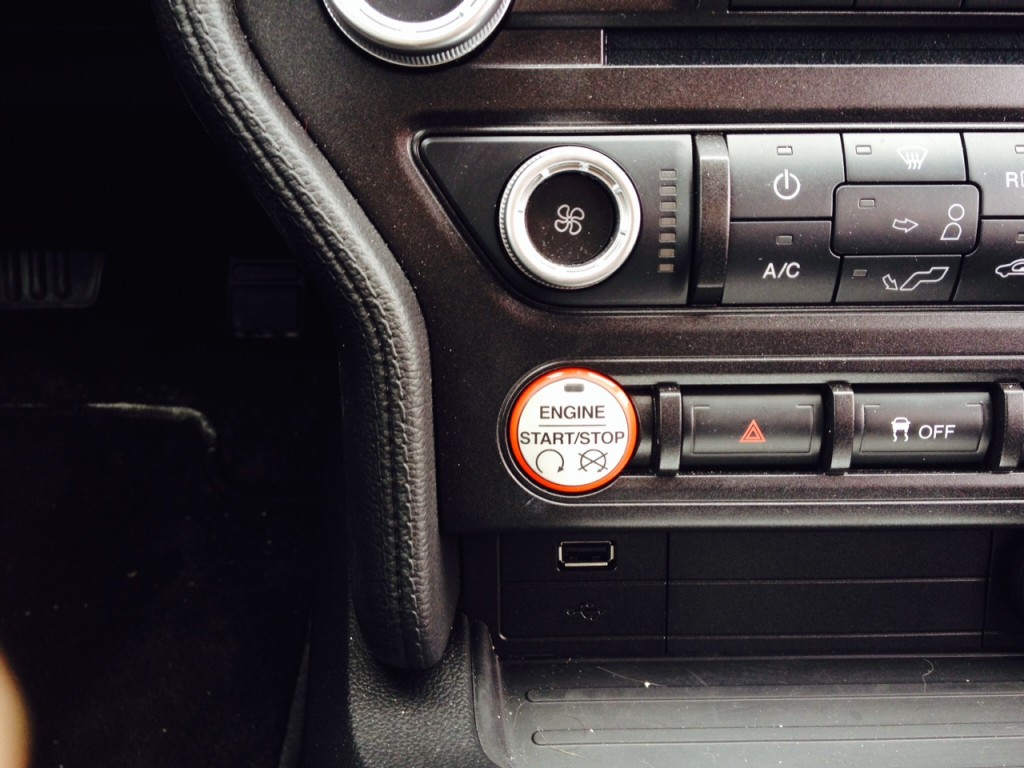 Let’s get to that engine. As mentioned, it’s a V6 which produces 300 horsepower and 280 pound foot torque. I’m not sure when 300 horses became a miniscule number, but if you were to check out a few popular Mustang forums, you’ll see plenty of complaints about this. Let’s not forget that when Ford introduced the high-performance V8 version of the Mustang in 2005, it “only” featured 300 horses as well. But the bottom line is this is a decent engine that can still get you from zero to 100 in a bit over 5 seconds. And don’t worry, the gnarly growl that you’d expect from a muscle car is still there. The only thing that does this car a disservice is the optional automatic transmission. It doesn’t feel as if it has any interest in an aggressive driving whatsoever. Instead, it would rather you come down off of your caffeine high and consider the polar bears. There’s nothing necessarily wrong with that, however lazy shifting cannot be excused. Of course, you are able to select the gears yourself through paddle shifters but the fact that my tester arrived with a split downshift paddle does not exude confidence in the product. I happen to know the journalist who first tested out the car and he notes that the paddle was already splitting apart then and also barely used it. Not good, Ford. Not good. 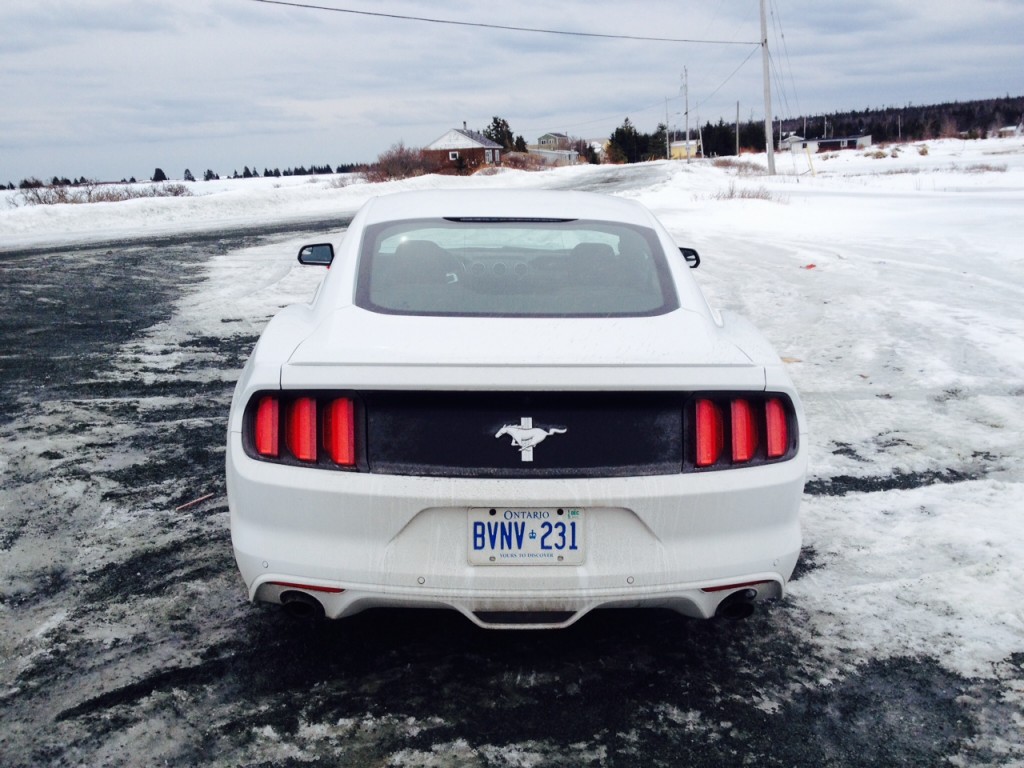 This would be a non-issue if you just save yourself the money and go with the six-speed manual. Not only will you have less wear and tear items to worry about but you’ll likely have a hell of a time behind the wheel. I say likely because it can’t possible be worse than the automatic. I don’t mean to suggest that it’s a horrible transmission, but I just feel that it takes away from what the Mustang is truly capable of, and that is really the main story here. 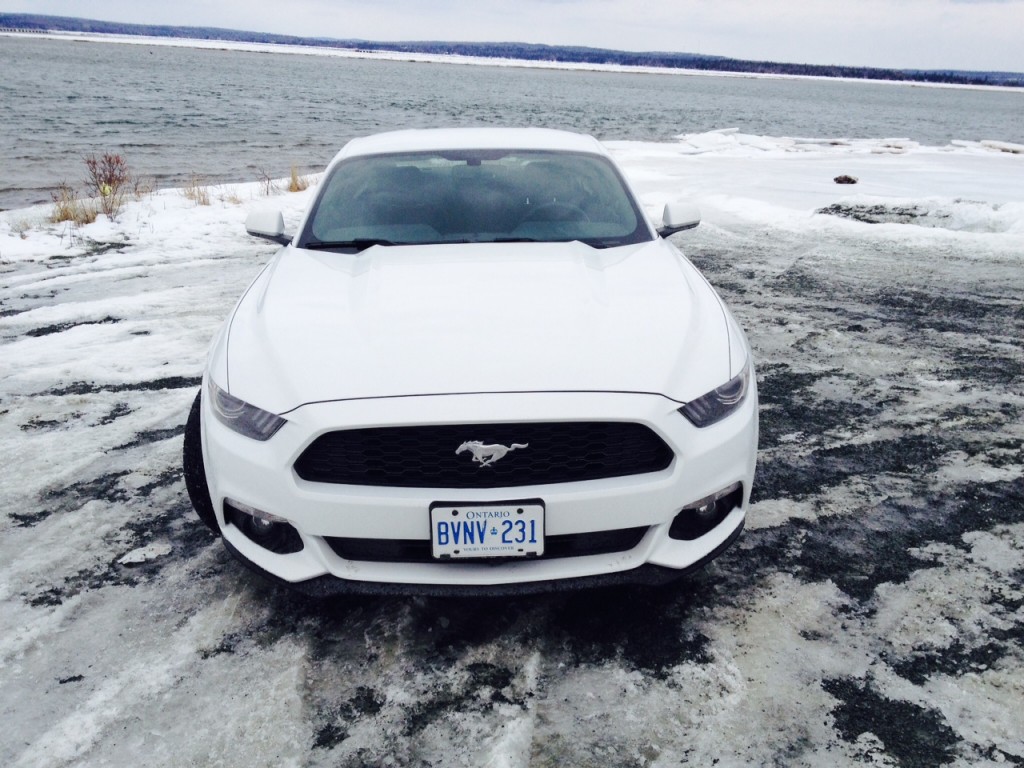 Let’s make no bones about it, the Mustang is a very capable car. Gone are the days where drag races were the only thing that got the Mustang any sort of praise. This thing, despite its mass, is a decent corner carver. The steering, which has three modes to choose from now, is fairly direct and predictable. Oddly enough though, it’s in normal mode where you get that sensation. Comfort mode has no business being on a car like this in the first place and sport mode feels just a tad too artificial. It does beg the question as to whether more choice is actually a good thing or not. In this case, no. Just keep in in normal mode and you’ll do just fine. 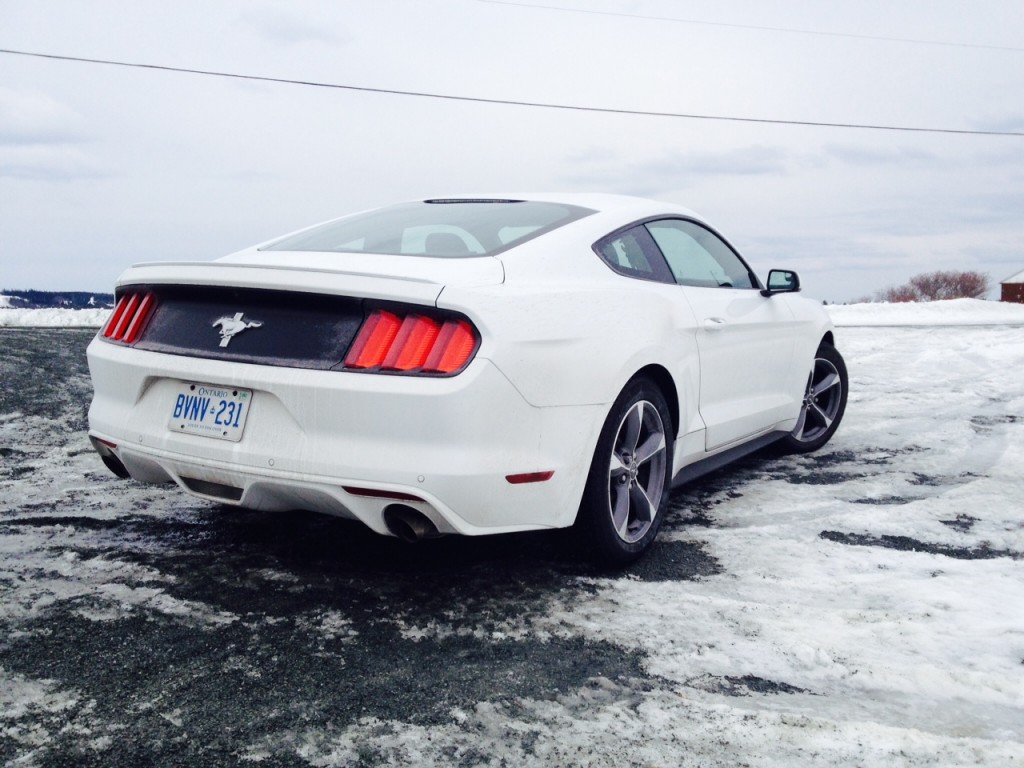 But when carving corners the Mustang feels sharp and poised. It doesn’t give the sensation that it is actually smaller, in fact, it feels like the large car that it is, but it never feels unmanageable or that you are pushing the car to its limits. Now admittedly, this was only tested in a short period of time, or more to the point, within the limited amount of clear pavement on the road. Last month Nova Scotia still had plenty of snow and ice on the ground which prevented a more thorough test of its handling abilities, but it did make for some amazing tail slides (which the stability control does allow you to have some fun with before it kicks in) and of course empty parking lot donuts. Let’s not forget what the Mustang represents, after all. 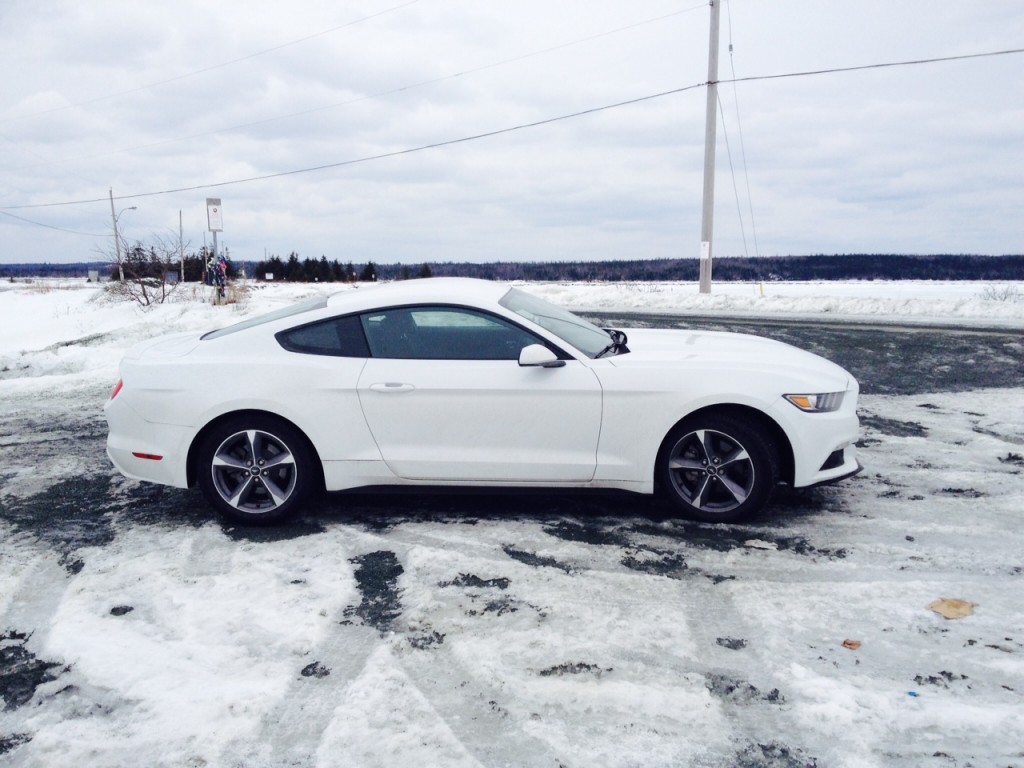 And by all counts, this is the best Mustang yet. It’s more powerful, looks the best its ever looked, has a nice interior now, loads of performance with added handling abilities and won’t necessarily cost you a house re-morgage. 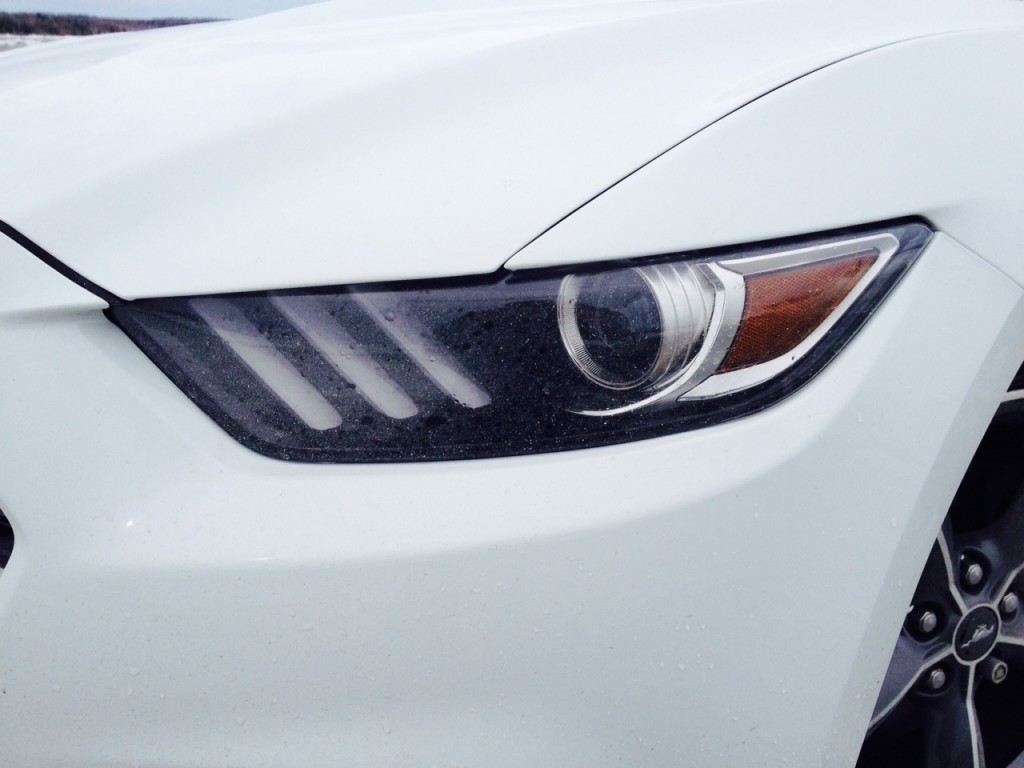 But let’s get back to that 4-cylinder. Having not tested it, it’s hard for me to say whether or not it would be the better buy. However it certainly makes a tremendous case for itself doesn’t it? It has more power than the V6, is better on gas, makes the same Mustang growl and you have plenty more options to choose from at that trim level. This begs the question: why does the V6 still even exist? Sure, it’s a few grand cheaper to start, but the savings in gas from the 4-cylinder will eventually make that advantage a moot point. And why not send the newest engine for automotive journalists to try? Well there obviously is a reason and it’s likely because change is usually progressive (though you wouldn’t be able to tell that from the latest provincial election in Alberta). People still struggle with the idea of putting a V6 in a muscle car at all, so to drop it altogether in favour of a 4-cylinder would likely be a bit too traumatic. 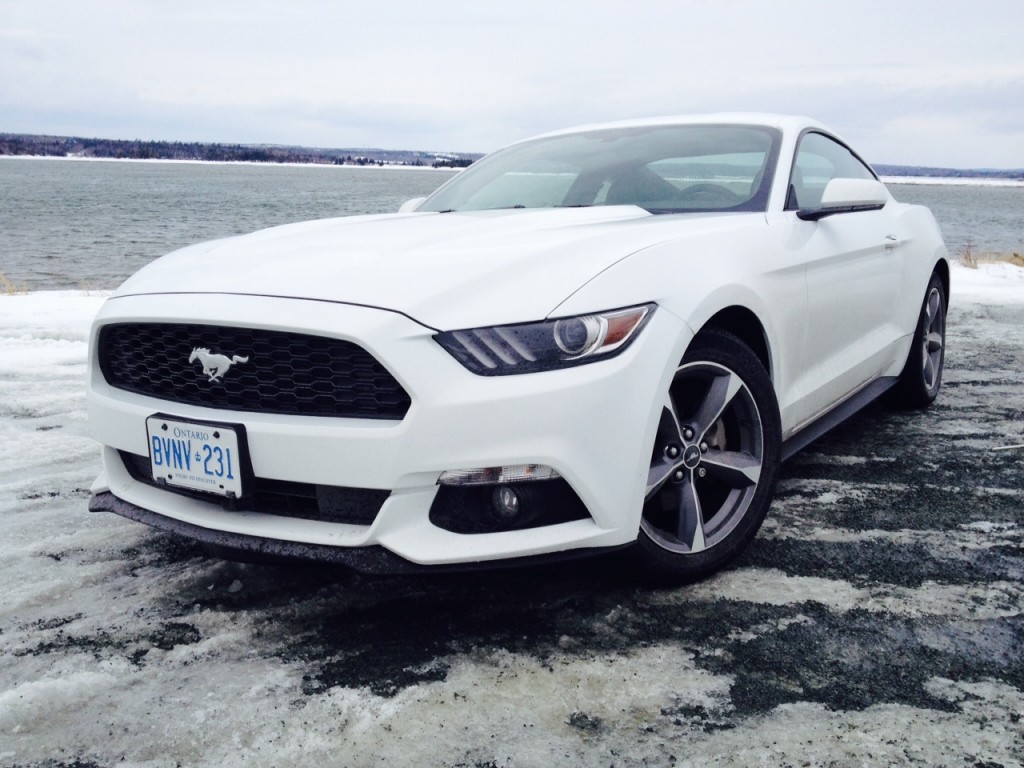 All this is to say that I predict the V6 iteration of the Mustang will soon be on its way out once the 4-cylinder becomes more accepted. But the fact of the matter is, no matter which unit you choose, you’re getting the best muscle car available for sale today. The Mustang is kilometers ahead of its competition in almost every measurable way and has the unique ability to capture both older and younger audiences.