You may remember the Mustang V6 I reviewed back in what felt like the apocalypse (that’s Nova Scotia speak for winter). I remember having a conversation with one of Ford’s marketing agencies and was asked what I thought of the sort of product they were sending for review.

As always, I was honest but very Canadian about it. I started off by applauding them for everything they were doing right. Then I gently and cautiously let them know how disappointing it is that they never really send interesting product our way, it was always mainstream vehicles like your Fiestas and Focuses (Focii?).

Sending the V6 Fastback was their response. Fair enough. But let’s be honest, it is the tamest of all the Mustangs available. And while I wouldn’t have turned away the 5.0 litre V8 GT Mustang, the trim I was really eyeing was the new EcoBoost. This is the first time a 4-cylinder has been offered in the Mustang since 1978, and they managed to make it both more efficient yet more powerful than the V6. 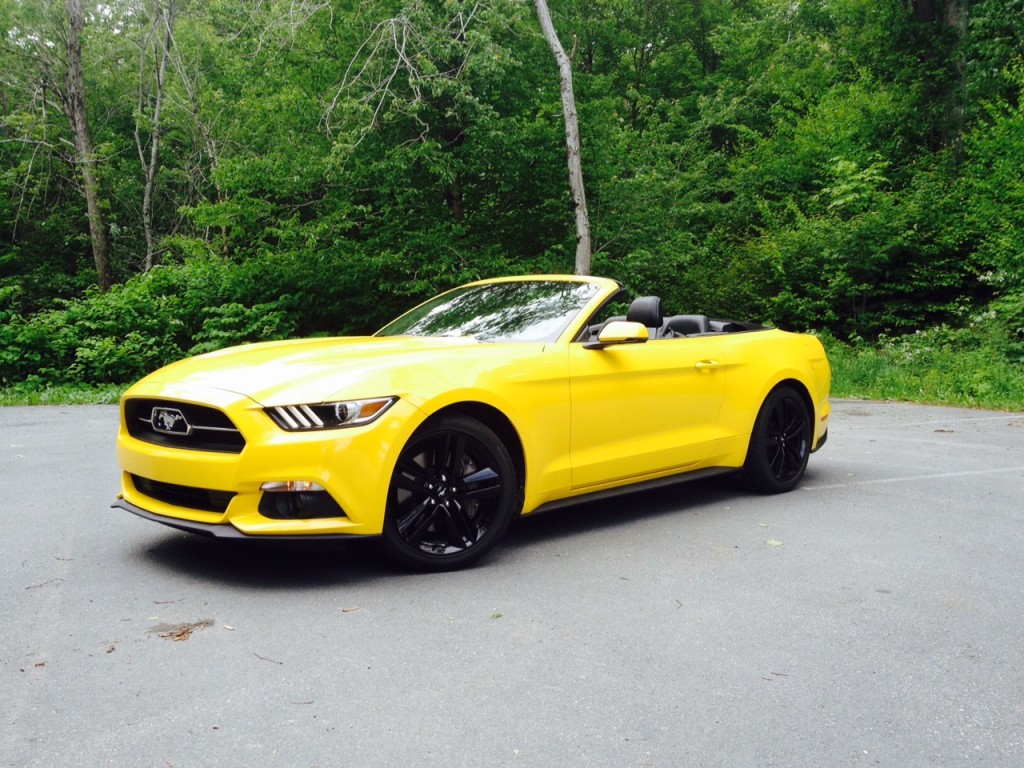 Well Ford Canada delivered. That is, they delivered a yellow EcoBoosted convertible ‘Stang with black wheels (as a part of the performance package) straight to my driveway. Well played, Ford Canada. Now this is an interesting car. And it gets noticed.

But it wasn’t members of the opposite sex that the yellow Mustang attracted. It was 10 year old boys whose jaws hit the ground and Baby Boomers who risked crossing the street without looking just to see it up close. 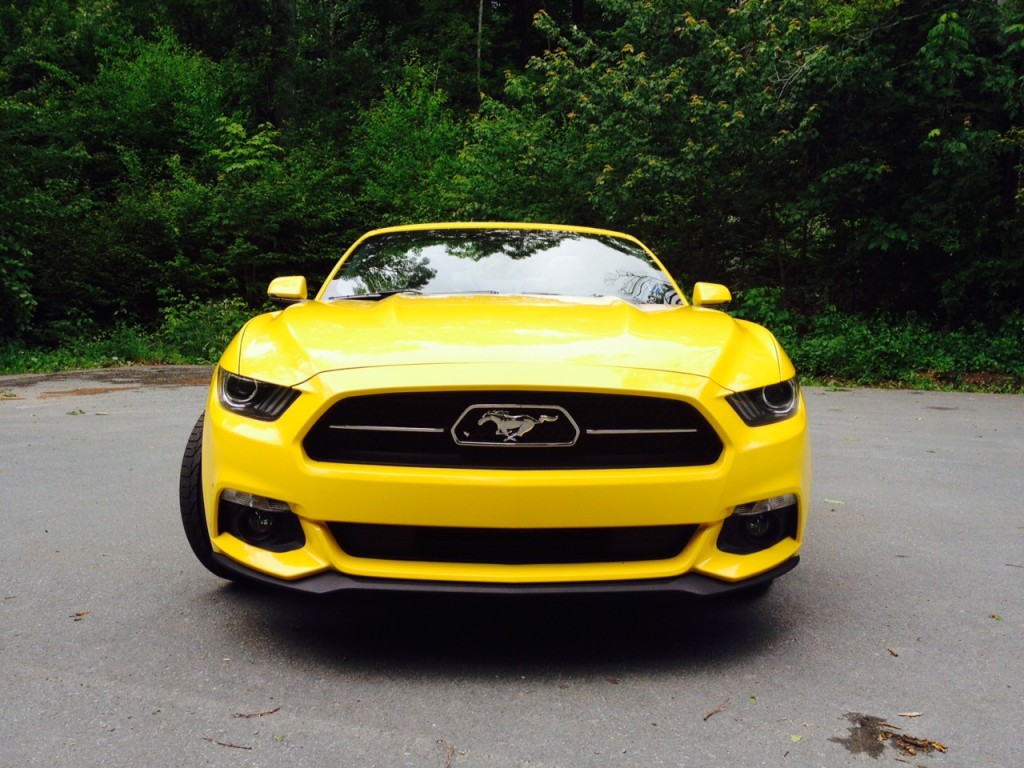 Whether the top is up or down, the Mustang owns most parking lots. It’s classic retro with a healthy dose of modernity. The long shapely hood makes you think there must be a V12 in there, little would anyone know that it’s a tiny four cylinder. In fact, there’s nothing really about the Mustang Ecoboost that gives away that secret. Only Mustang aficionados would know that you can only get the performance package with either the EcoBoost or the V8. And only Mustang aficionados know that the V8 gets 5.0 badging on the side. That really would be the only thing that gives the Ecoboost away. The black wheels look especially fantastic when the black roof is up, and the now traditional three bar tail lights with sequential turn signals complete the look. 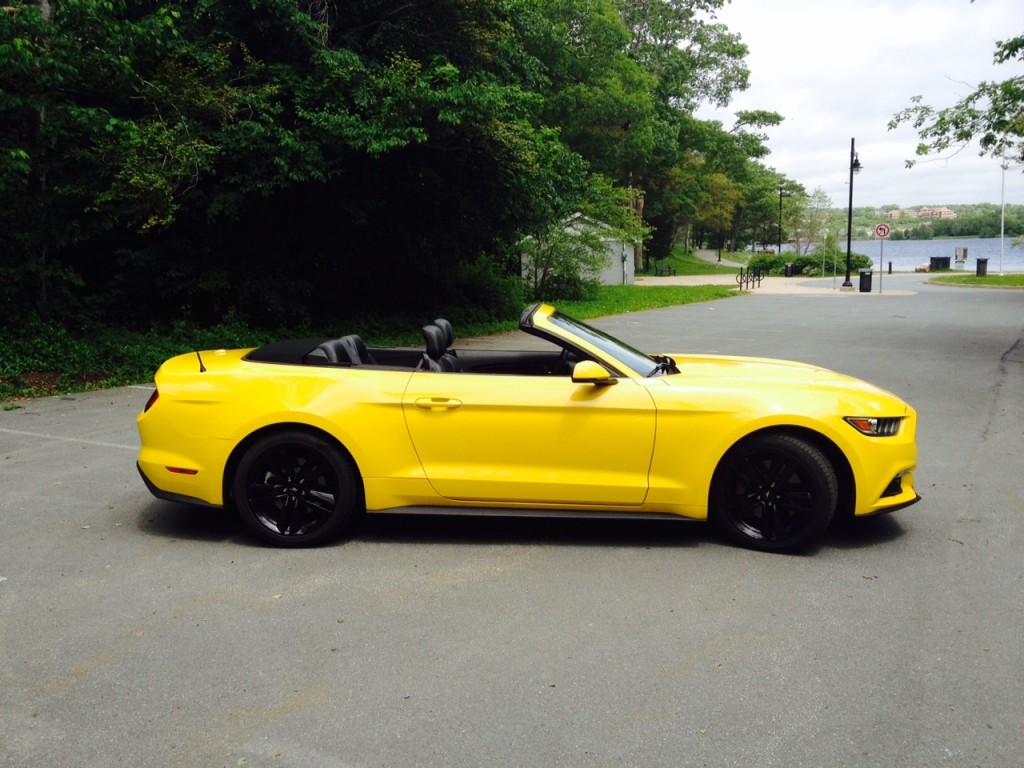 I won’t spend too much time on the interior other than to say that it is vastly improved over previous generations. My tester got Ford’s optional infotainment system which provides a large screen and also houses a very big and clear picture when the back up camera is engaged. And MyFord touch is still, uh, let’s say stubborn. But Ford’s new system, available on a Ford near you in the near future, should clear up those issues. 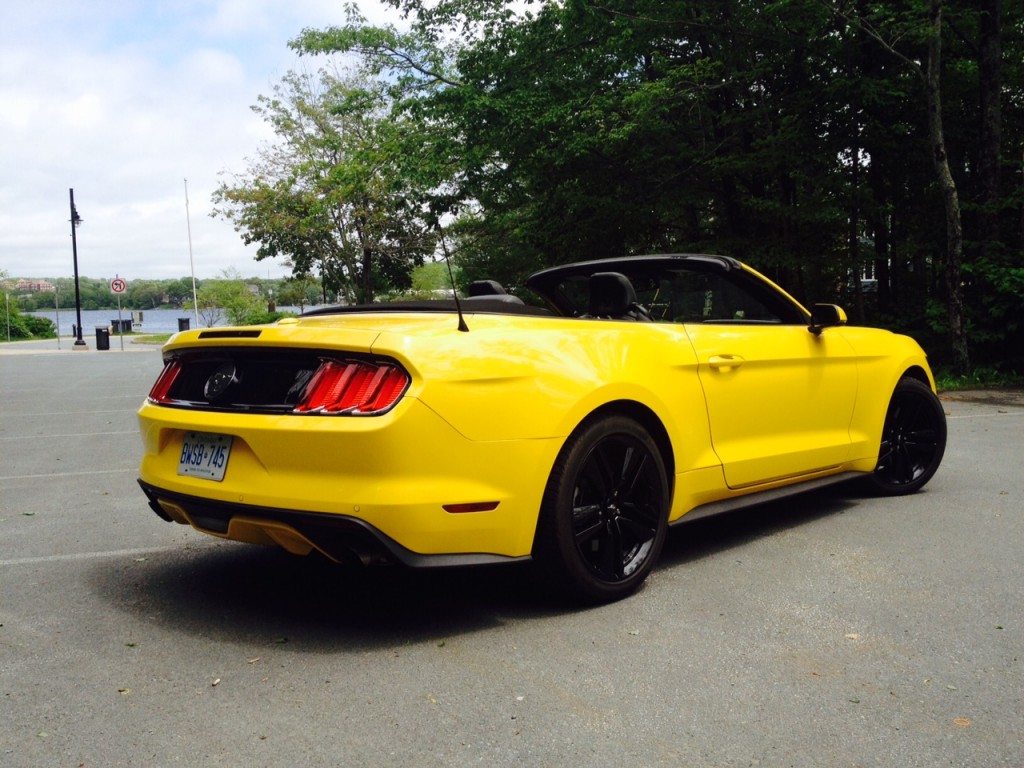 I’ll also mention that the rear seats are really only usable as shelves to throw your jacket or a parcel back there. Human being cannot fit, unless they have no legs. Considering the Mustang’s massive overall size, it is a bit puzzling that they couldn’t squeeze a few extra inches for added leg room. 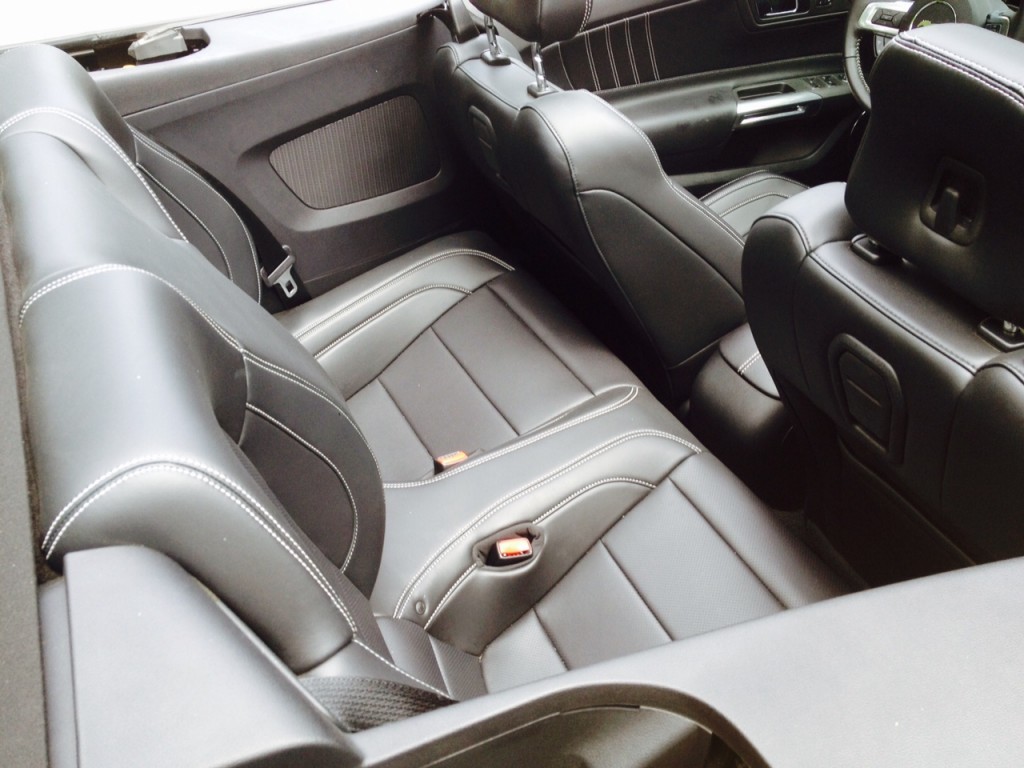 Now, let’s get to that engine. It’s a 2.3 litre 4-cylinder EcoBoost. EcoBoost is Ford speak for turbocharged. It produces 310 horsepower and 320 pound feet of torque. By comparison, the V6 produces 300 horsepower and 280 pound feet of torque. You can have your EcoBoost with either a six-speed manual or a six-speed automatic. My tester was equipped with the latter, unfortunately. However shifting in manual mode is adequately responsive and shifts are decently smooth. Still, most automatics are a bit of a buzz kill and I would imagine the six-speed manual would brighten up the party. 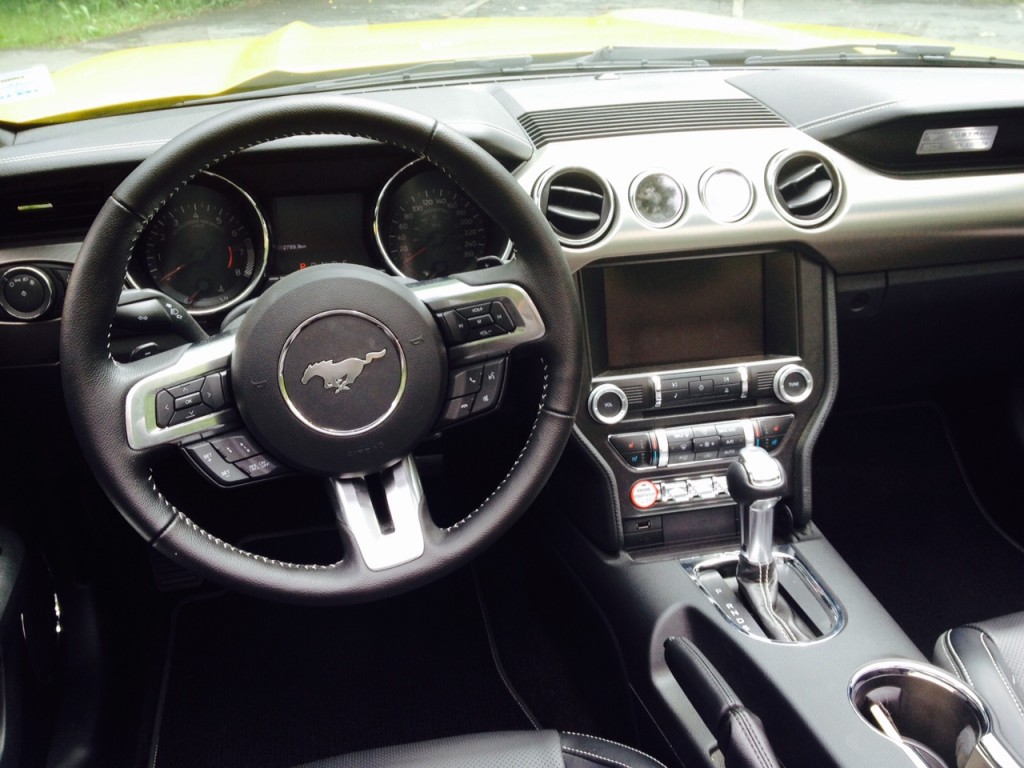 Speaking of buzz kills, your buzz gets brutally murdered when you press the start button. In any muscle car you expect a loud, borderline obnoxious growl when it starts up. With the Ecoboost, it makes about the same growl as your blender does. It’s off putting at first, but all it takes is manual obnoxiousness. Rev the engine yourself and you’ll hear a faint growl. It’s really only possible to hear it from the outside, even when the top is down. It’s a bit embarrassing actually, especially when a pack of eager 10 year old boys are anxiously gathered around the car waiting for the monstrous growl when you turn it on. It never feels good to disappoint a 10 year old. 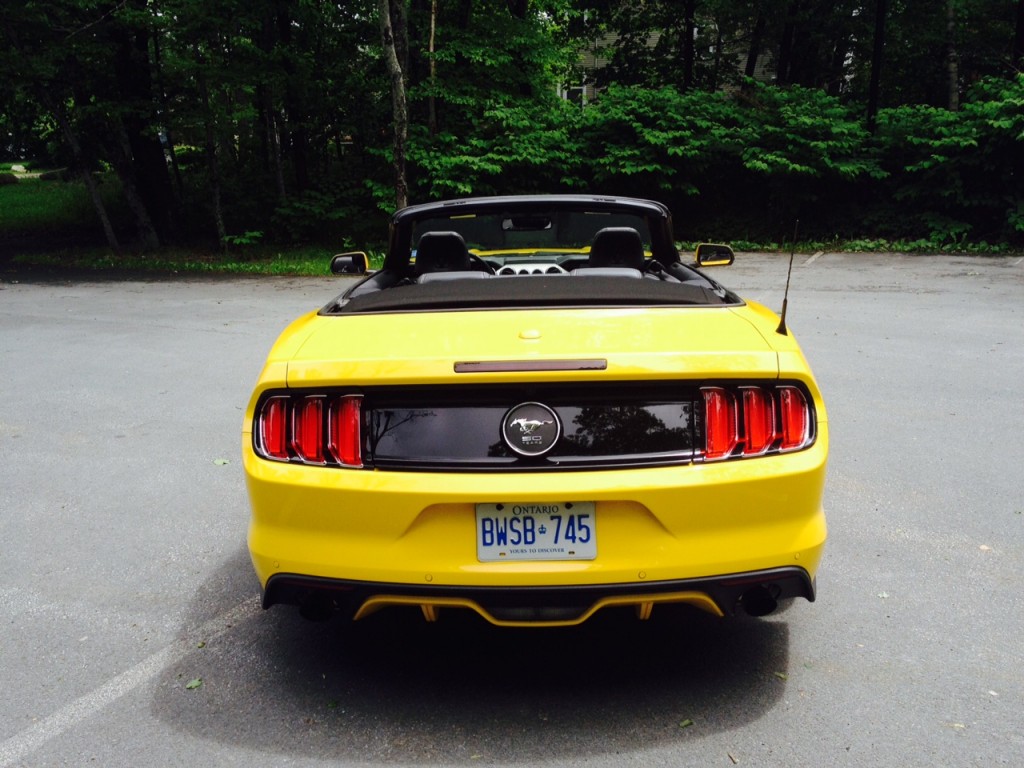 As a result, during regular driving around town, it will essentially feel like you are driving a mundane run-of-the-mill Ford; exactly what I told Ford I was tired of getting. However,  once you put your foot down and the turbo spools up, it gets a lot more interesting. The turbo actually makes the Mustang feel like a light, tight  sports car. And in a way, it is. I’m still quite shocked at how good Mustangs (of any sort) are able to tackle corners. There was once a time when Mustangs were all about straight line performance. Now it seems you can have both straight line and commendable handling abilities as well. You can also adjust steering input. There’s normal, comfort and sport. Do yourself a favour, set it to sport and leave it like that forever. The other two modes are painfully dull. 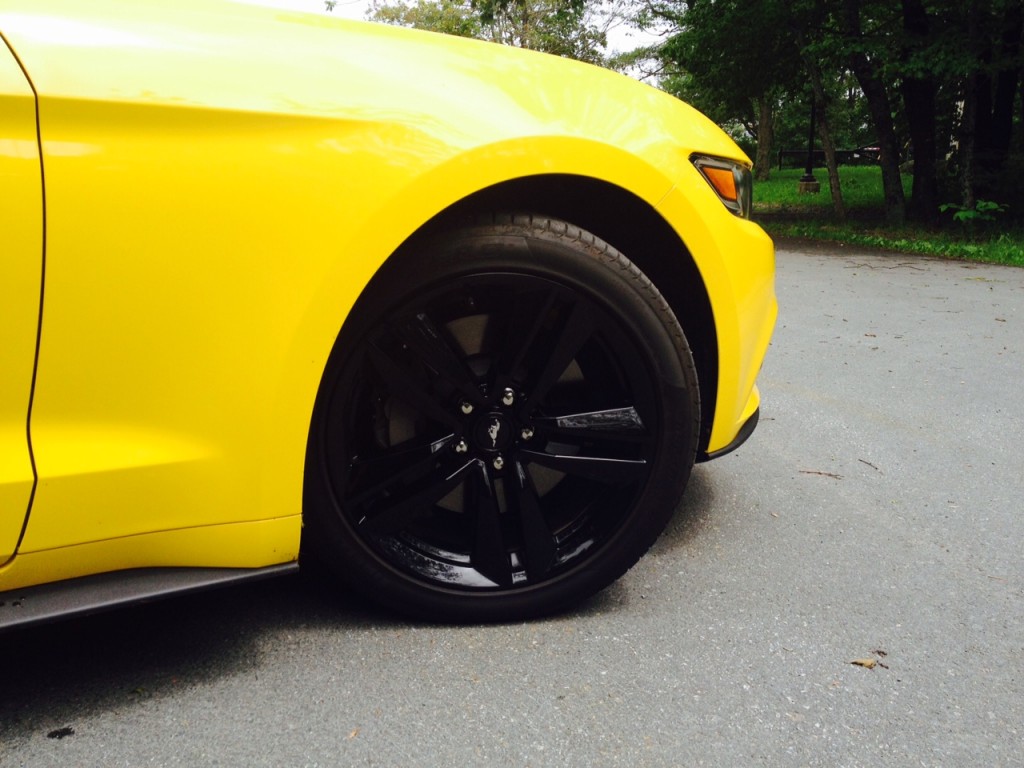 But carving corners in the Mustang, in a way, reminds me of how a lot of German cars can carve corners. That’s a big feat to have achieved. You only get a reminder of the fact that you are indeed still in a large, bulky muscle car when one of the back wheels grazes the gravel shoulder during a turn: oh right, this thing is huge. However, as mentioned, it doesn’t feel cumbersome when you drive it spiritedly. That’s largely thanks in part to the performance package which upgrades the suspension, among other things. 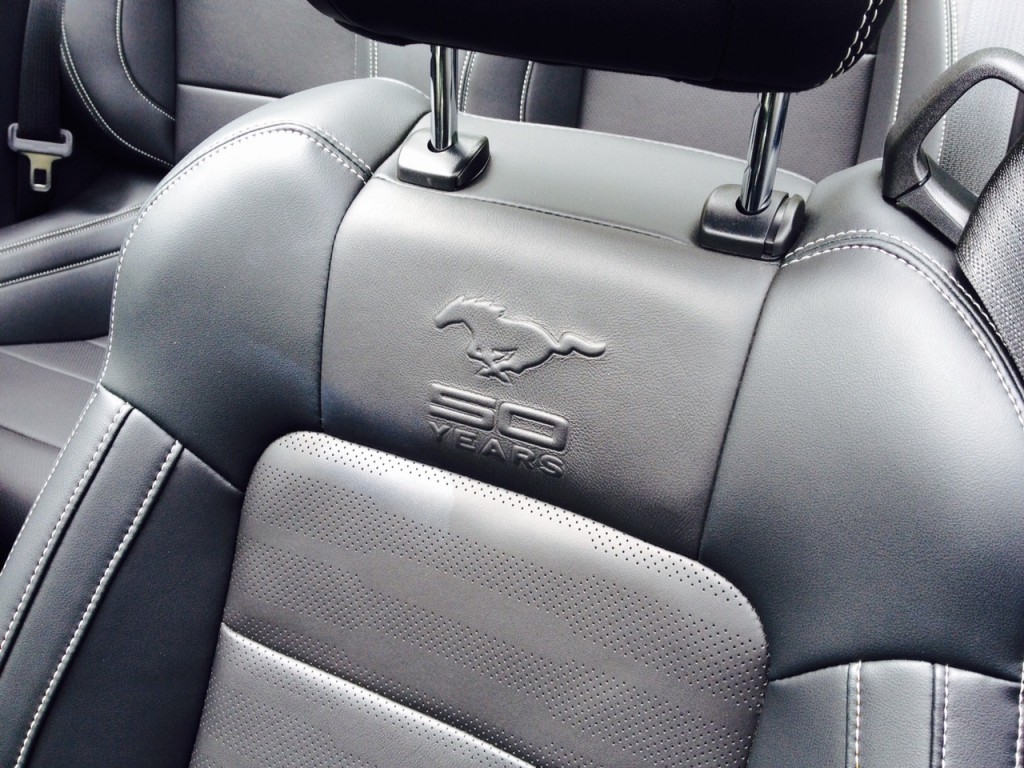 Faults? Well, the trunk opening is extremely shallow, however the roof doesn’t retract intro the trunk meaning you still have fairly good cargo space even with the roof down. Speaking of the roof, it would be nice if there could be some sort of indicator, a chime perhaps, that the roof has finished its song and dance whether you are putting it up or down. As mentioned, MyFord touch is still finicky and the back seat is about as useful as a giraffe being cast as Napolean in a play. 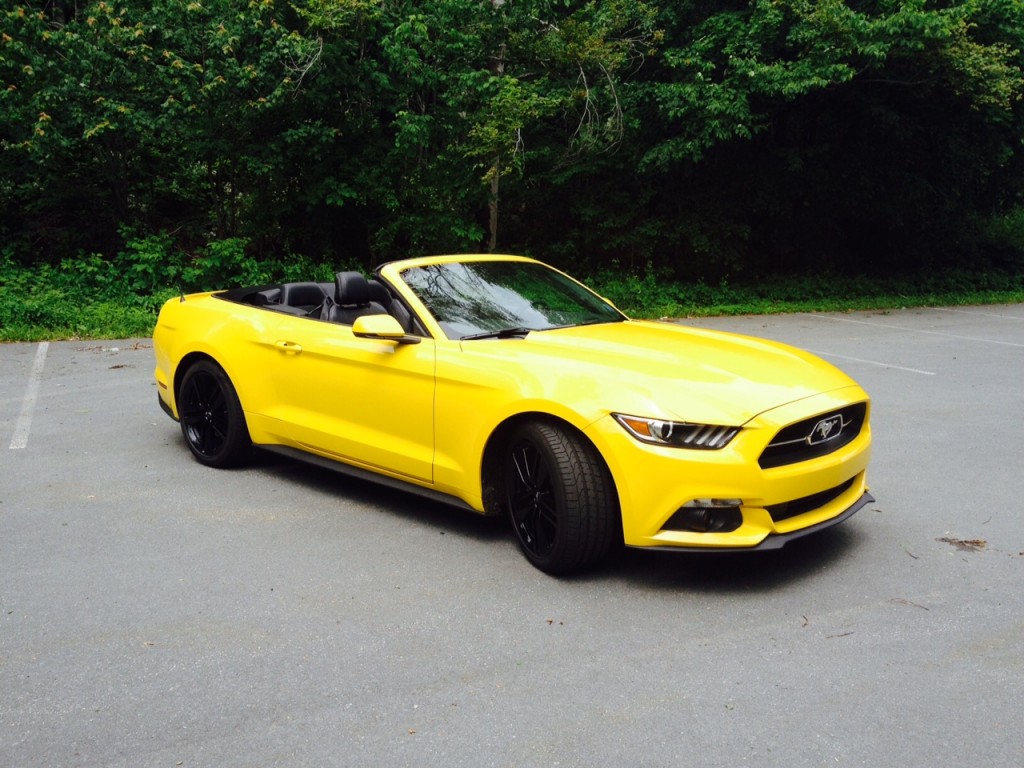 However there is a bit of a bigger issue. The EcoBoost Mustang is good, but is it actually worth the almost $9,000 premium over the V6? Before I get into that, I should mention that the price difference between the EcoBoost and the V6 in Fastback form is a more palatable $3,000. Well, do be honest, even though the EcoBoost is technically more powerful, it certainly doesn’t feel it. That’s not to say it’s slow, it just doesn’t feel any quicker. Secondly, I returned 11.1 L/100 kms in mostly city driving. I know the Mustang is heavy, but that’s a tough pill to swallow for any 4-cylinder. 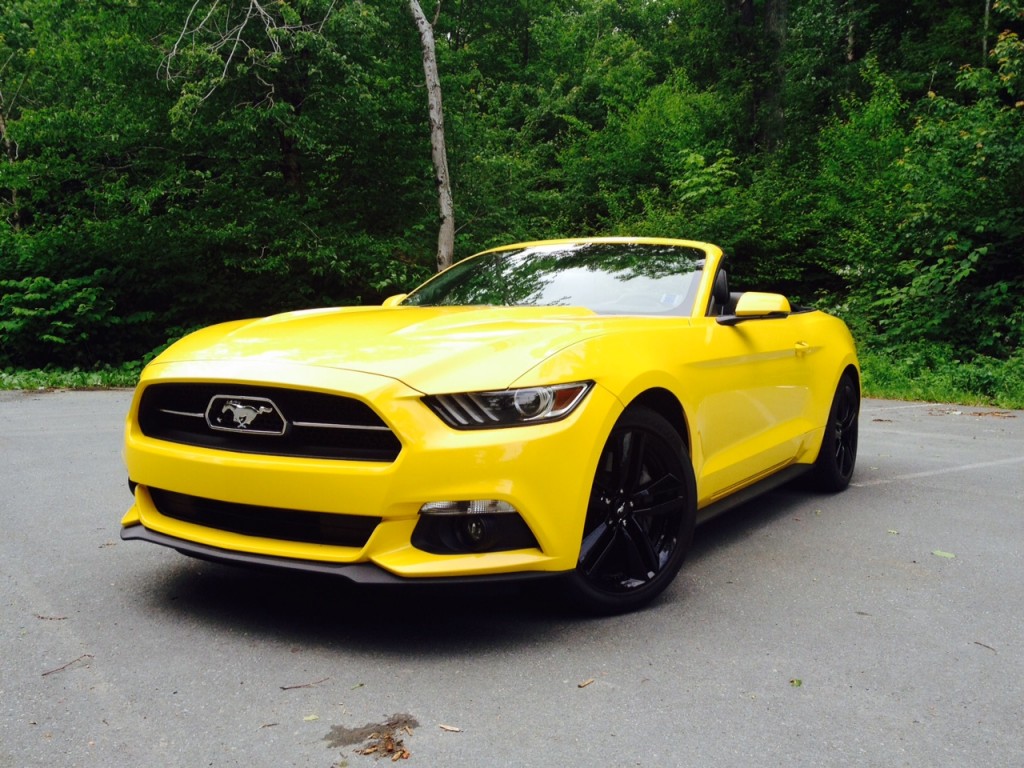 At the end of the day, the EcoBoost Mustang is certainly worthy of being a Mustang. It’s relatively quick, looks tremendous, has an improved interior and surprising handling abilities. Now that I’ve experienced it though, I’m not quite sure if I would take it over the V6. The V6 offers similar performance, a more appropriate sound and while fuel consumption is a tad worse, it likely wouldn’t be immediately noticeable when you review your bank account. All this is to say, you likely wouldn’t go wrong with either, and let’s not forget that the V8 GT is still a thing. If you really want to experience a true American muscle car at its best, then get the GT. Hands down.