If you’ve never been to the Cabot Trail before, do yourself a favour and add it to your bucket list. There’s a reason why the iconic trail in Cape Breton, Nova Scotia is known internationally. It’s immensely scenic, but more importantly, the roads themselves are (for the most part) quite well maintained and gratifyingly twisty. In short, it’s a gear-head’s wet dream.

Obviously you need the right car for a trip like this and the only reason why anyone would bring a Chrysler 200 for this sort trip is if they got stuck with one as a rental.

But hang on one second. Chrysler has recently redesigned the 200 and they’ve made a trim level which they say will please your inner 9-year old once you get behind the wheel.

The 200 S with its supposed sporting credentials therefore was my choice for the trip.

Sidenote: if you do go to the Cabot Trail, do yourself a favour and do it in mid-October. The colours are breathtaking.

Anyway, back to the 200 S. Does it have what it takes to carve up the Cabot Trail with ease? I took one there to find out. 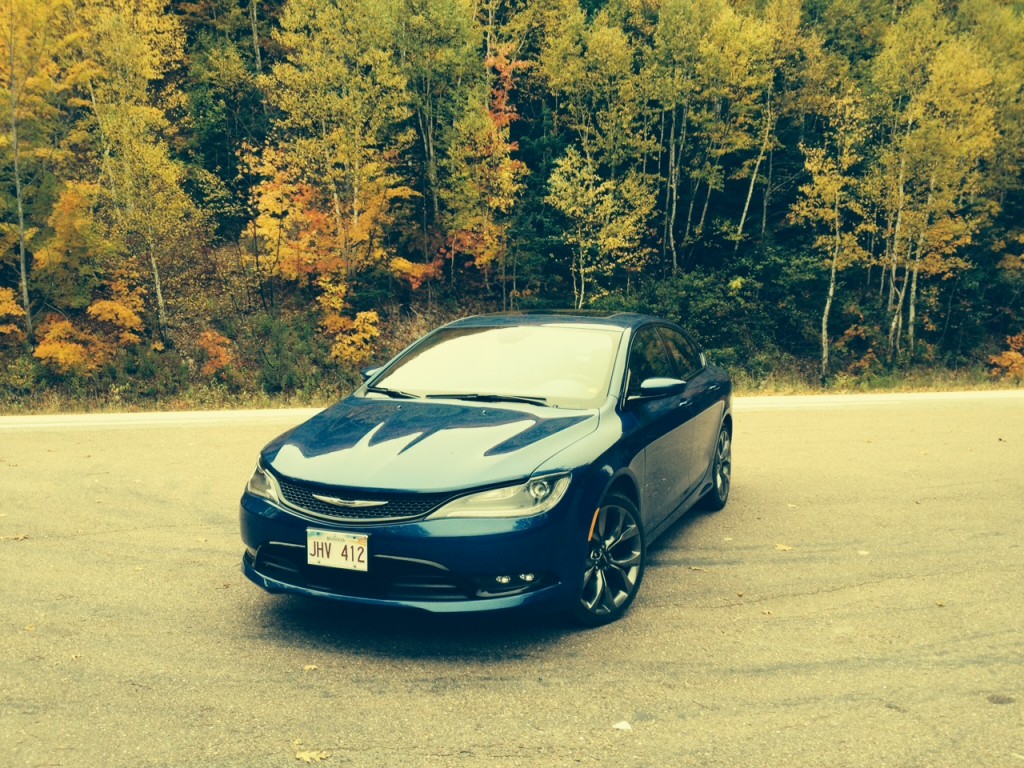 Now, the Sebring and subsequently the first generation 200 were both awkward looking vehicles. For 2015 Chrysler has redesigned it into a much more agreeable shape. Gone are the awkward lines in favour of a more swoopy design. Up front, the grill swoops up beautifully into the bonnet and it is matched with LED daytime running lights which mimic the shape of the grille. On top of that, with HID headlights and LED fog lamps, the 200 S makes quite the statement when you see it in your review mirror. The S comes with rather attractive and eye-catching 19 inch wheels, reminiscent of the old Honda Civic Si wheel design, on low profile tires. Out back is where things start to get a bit bland to my mind. It’s almost as if the designers thought the front and side profile would be enough to make the 200 stand out so they went for lunch. 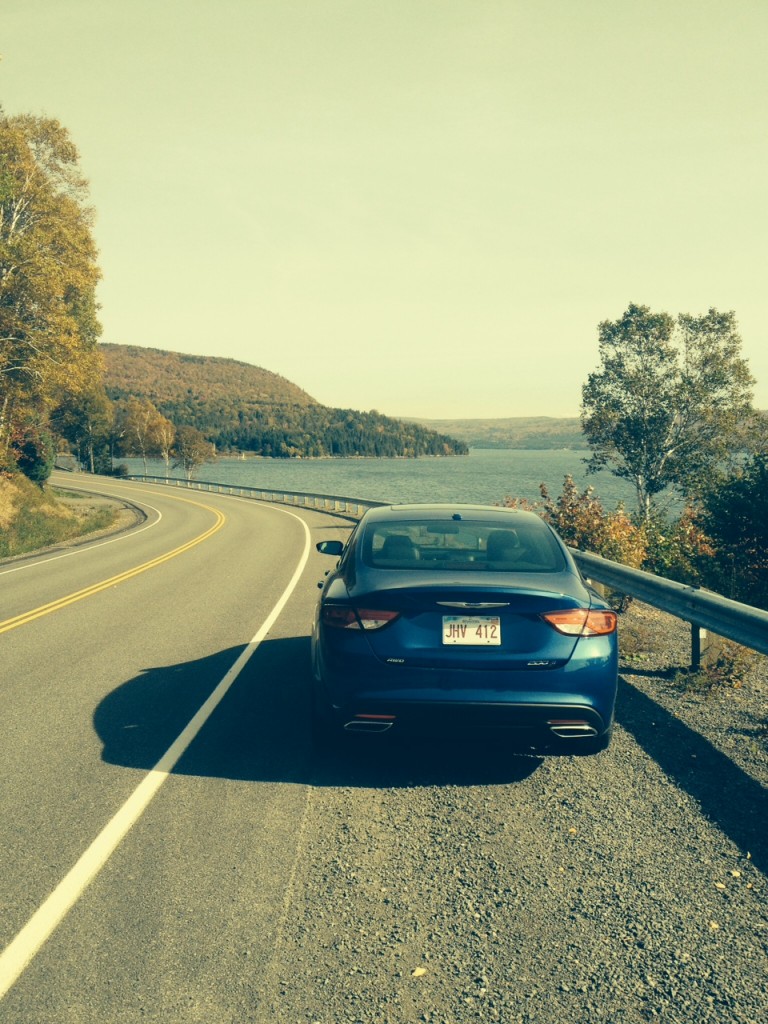 Inside is a very nice place to be. I don’t use the term ‘game-changer’ too often, but to put an interior as nicely crafted and as high quality feeling as the 200 S into a the family sedan segment is brilliant. In fact, I’d wager to say it’s one of the nicest interiors in the segment so far. I love the lower console which slopes upward into  Chrysler’s fantastic U-connect system. The angle makes reaching for the climate controls quite easy. I’ve experienced Chrysler’s rotary dial gear shifter in the Ram 1500 and wasn’t a huge fan, but it fits in much better on a car like the 200 S. It’s a unique feature that exudes a premium feel and it isn’t hard to get used to at all. 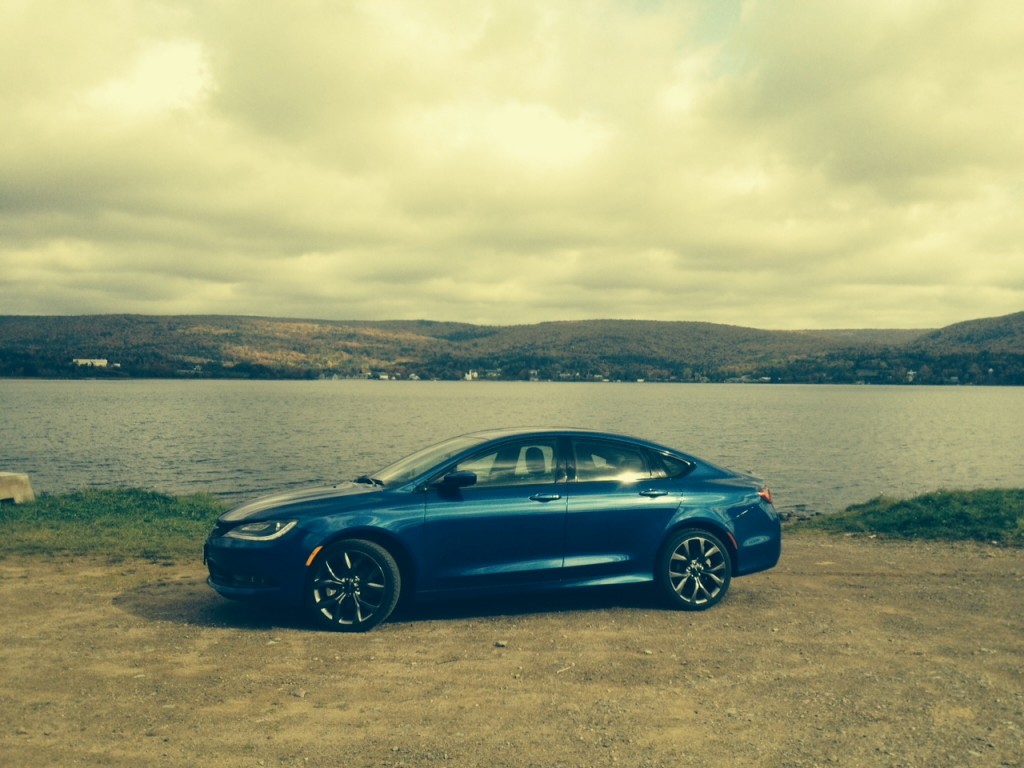 Behind the sloped console is a decently sized storage area for your stuff. That matched with cubby holes throughout makes the 200 S a decent little cupboard. Don’t be fooled by all the space for your nicknacks though. The 200 S does not have a large interior. In fact, the curvy roof line cuts into headroom rather sharply so you really do need to watch your head every time you enter and exit the vehicle. I smacked my head a few times while getting out, though I was told I “deserved it” for scaring my girlfriend on the bends. I’ll get to that in a minute. But rear head and leg room has got to be among the worst in the segment, so if you’re buying the 200 S for your family, you may want to do it while your kids are still in car seats. Once they grow up they’ll have a bit of a tough time back there I would imagine. Luckily trunk space is quite good as it swallowed up our cooler, full-size luggage bag and other small grocery bags with ease. 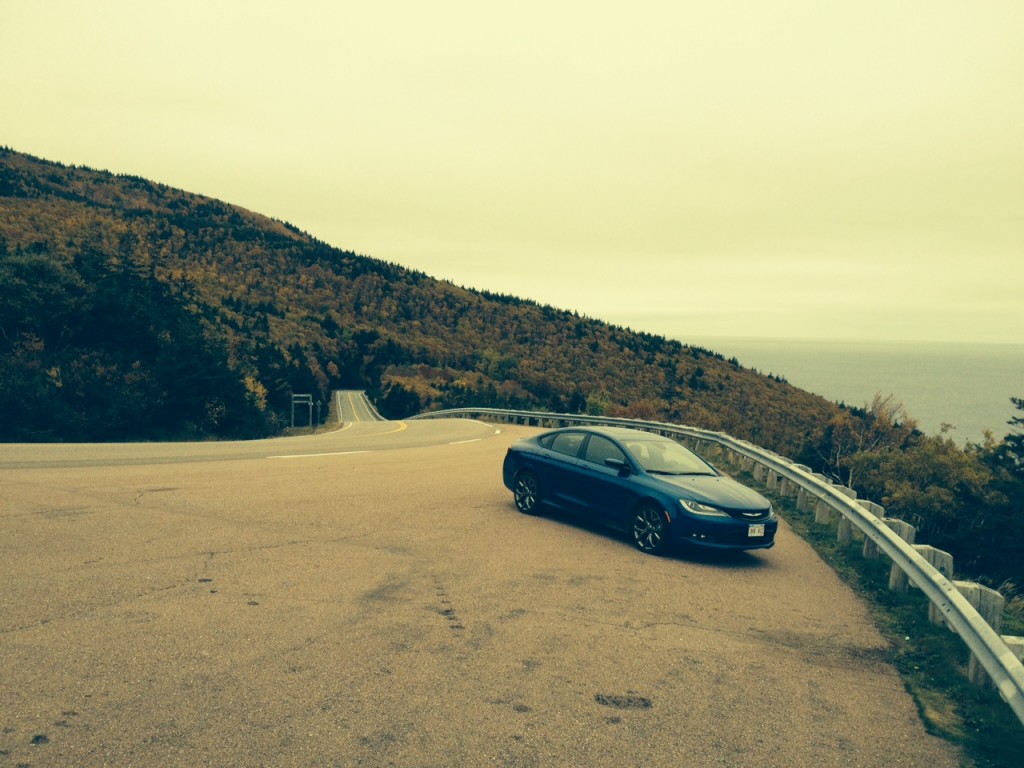 The 200 S is powered by 3.6 litre V6 producing 5 horses short of 300 and 262 pound foot torque. Those are some healthy numbers but the issue here is weight. The 200 S weighs about 3,800 pounds and that’s before you add the weight of yourself and your passengers. This means that the 200 S doesn’t feel as fast as it probably should. Some of that can be chalked up to the optional all-wheel drive system which bogs it down off the line. 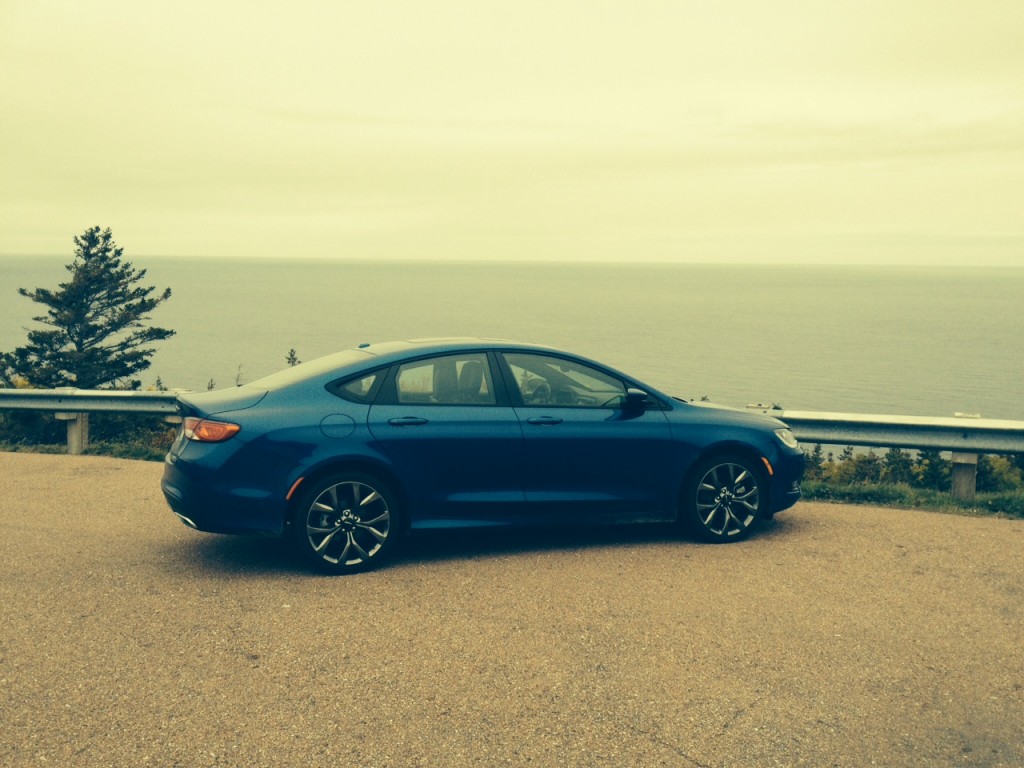 But the thing is, the 200 S has one of the throatiest exhaust notes in the segment so it certainly sounds fast and therefore gives the false impression of being a quick sport sedan. If that’s all you need then all the power to you (excuse the pun). I prefer my cars to actually go as fast as they sound. 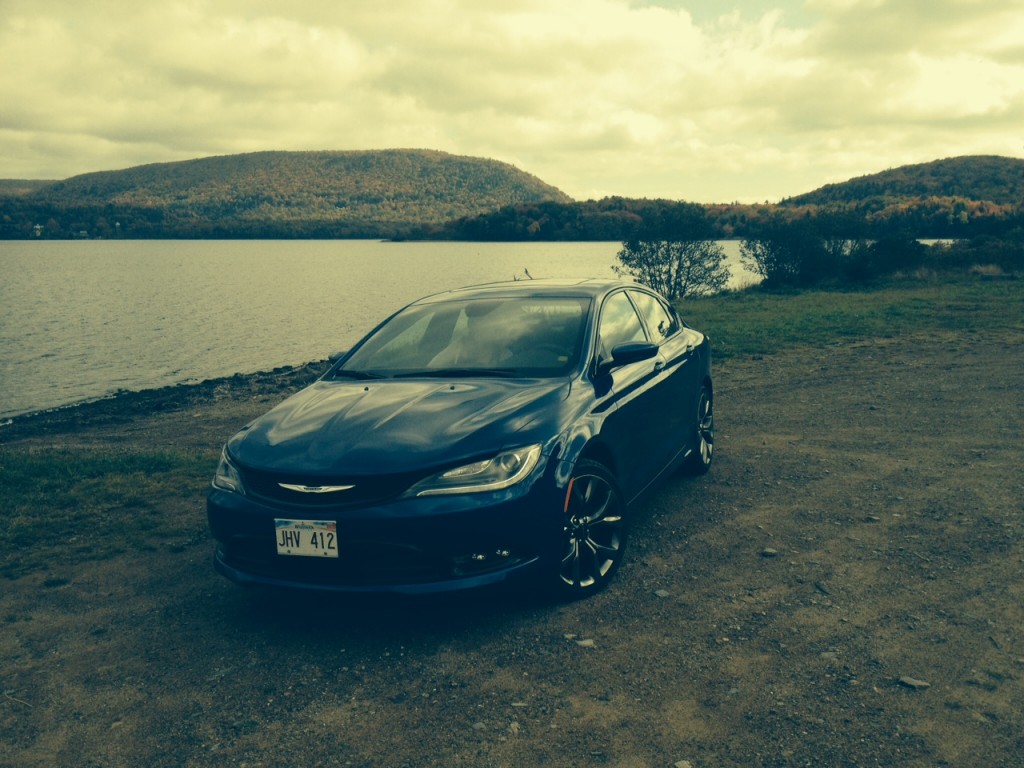 The 200 S features a class first 9-speed automatic transmission which can be shifted manually through paddles on the wheel. There are a few problems here. Firstly, 9-speeds is starting to become a bit ridiculous. You need to be going well over the speed limit in order to reach 9th gear (um, so I hear, I mean) otherwise you will never experience the 9th gear making it a bit redundant and an obvious exercise in male genital measuring against other automakers. But it’s for fuel efficiency, you say? Well the gearbox shift up as soon as possible for that very reason and again, it still never gets to 9th gear, so what’s the point in having it? 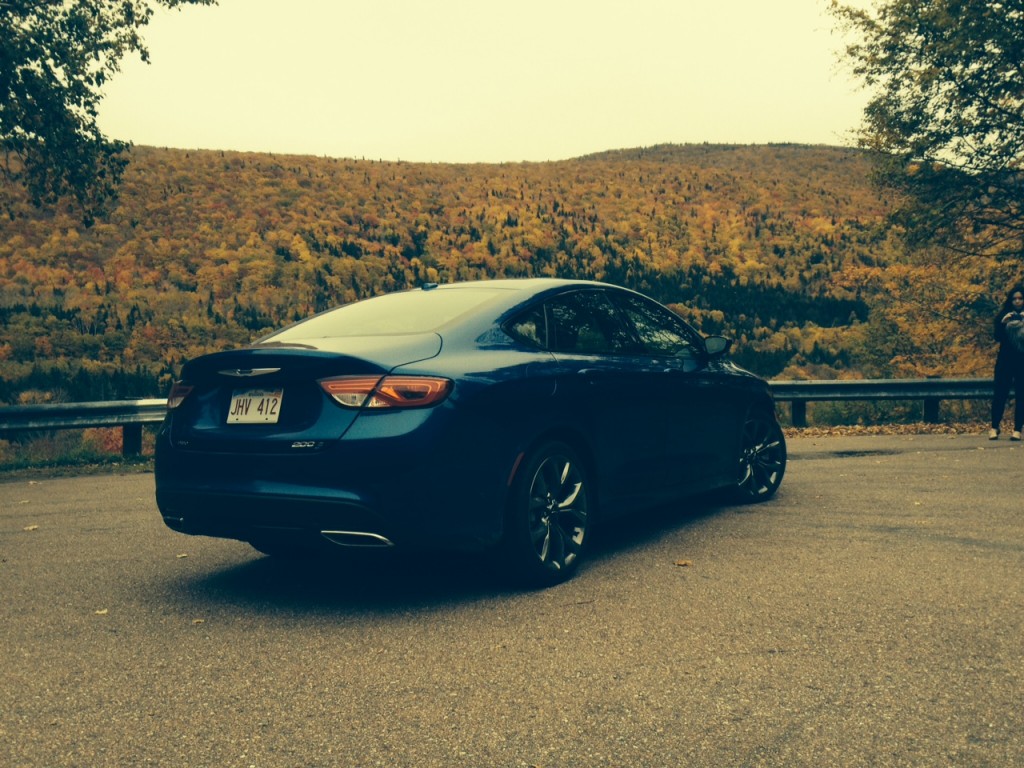 Secondly, the paddles are attached to the wheel rather than the steering column. This means the paddles are never where you left them and it causes problems when you want to downshift in the corners. Then there’s the paddles themselves. They are tiny, almost “half-paddles” if you will. But that’s not even the worst of it, Chrysler houses the steering wheel controls for the volume and radio channel surfing behind the wheels, right underneath the paddles. I found myself changing radio stations rather than gears which is an absolute buzz kill, especially when you are listening to Kenrick Lamar’s “i” and then it switches to Georges Bizet’s Carmen “Habanera” (yes, I actually had to look up an opera song because I don’t know any, but it still gets the point across). 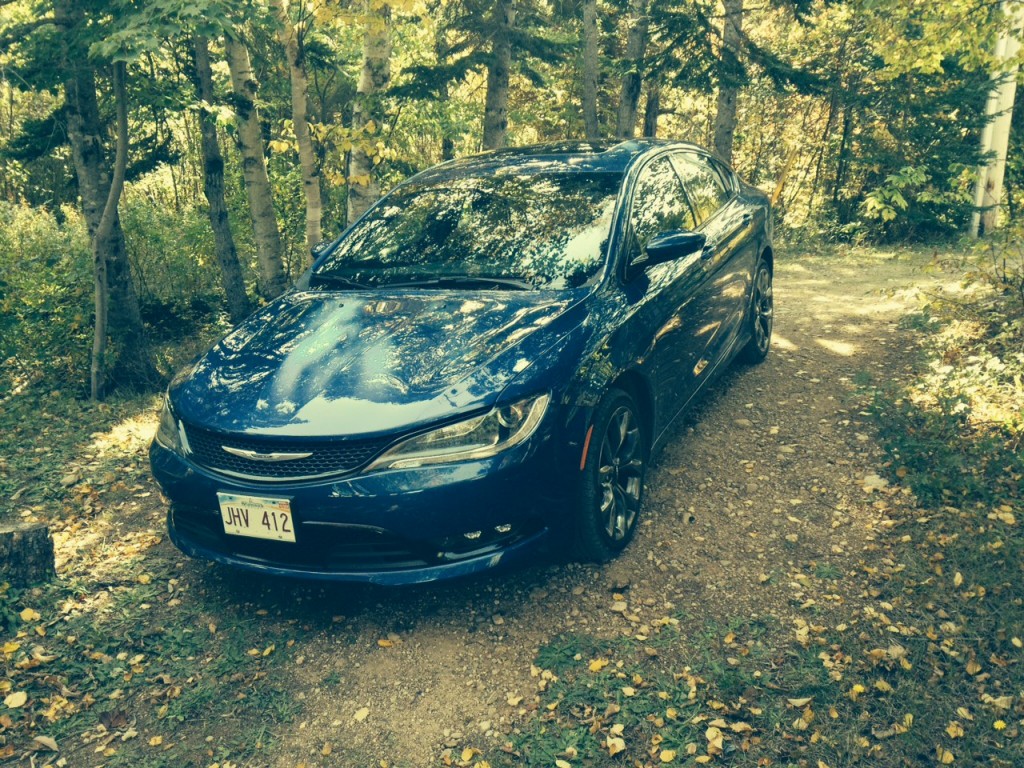 Thirdly, there’s the way the 200 S drives. The good news it is surprisingly comfortable considering the big wheels and low profile tires. But being the heavy beast that it is, I got lots of under steer when pushing the 200 S through the Cabot Trail’s tight corners. Even when I backed off a bit, I still didn’t have much confidence in the 200 S’s cornering abilities. It’s safe to say that it will corner better than a stock Toyota Camry, but it can get out of sorts easily. When you shift into ‘S’ mode, it automatically disengages the traction control (a much welcomed feature for enthusiasts) and tightens the suspension a bit, but it isn’t very noticeable. S-mode also keeps the revs high which is good, but it does not sharpen the gear shifts which is bad. 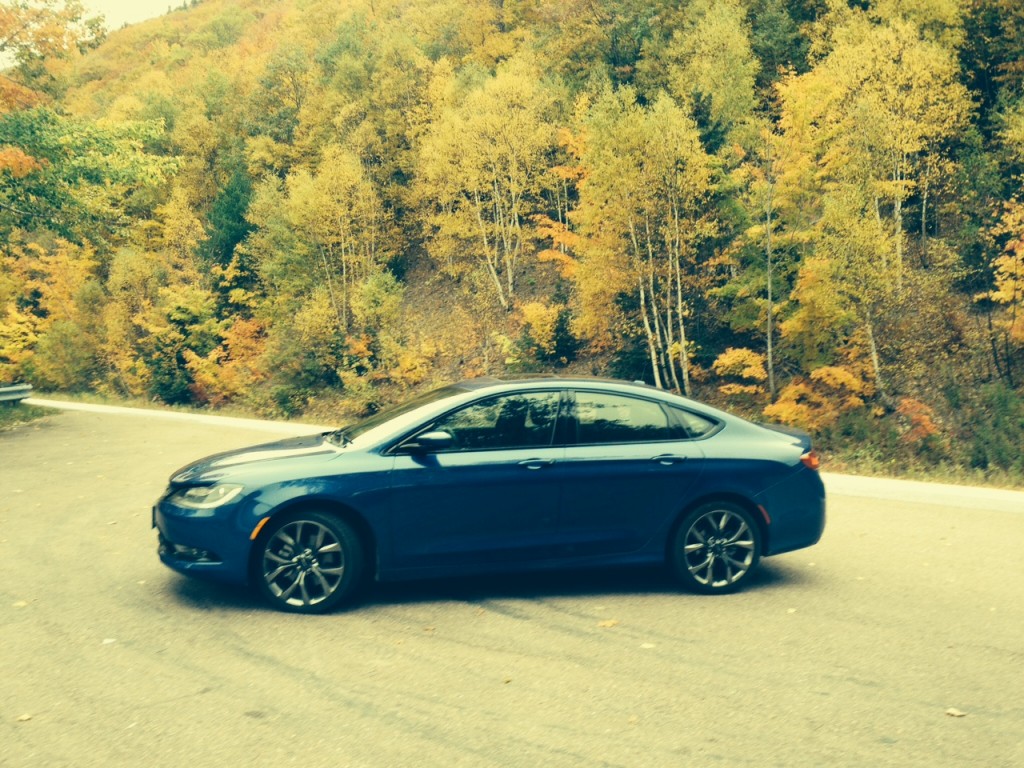 Then there’s the overall noise. At normal speeds, it feels relatively quiet. However at highway speeds there is catastrophic wind noise that comes from the large panoramic roof. It’s so bad that there were several times I though the roof was just plain open or that it hasn’t closed properly.

And then there’s the visibility. Sitting in the 200 S is a bit like sitting in a cave and as you can imagine this impedes outward visibility by a lot. That combined with rather large B-pillars which create large blind spots and you find yourself double, even triple shoulder checking lane changes. 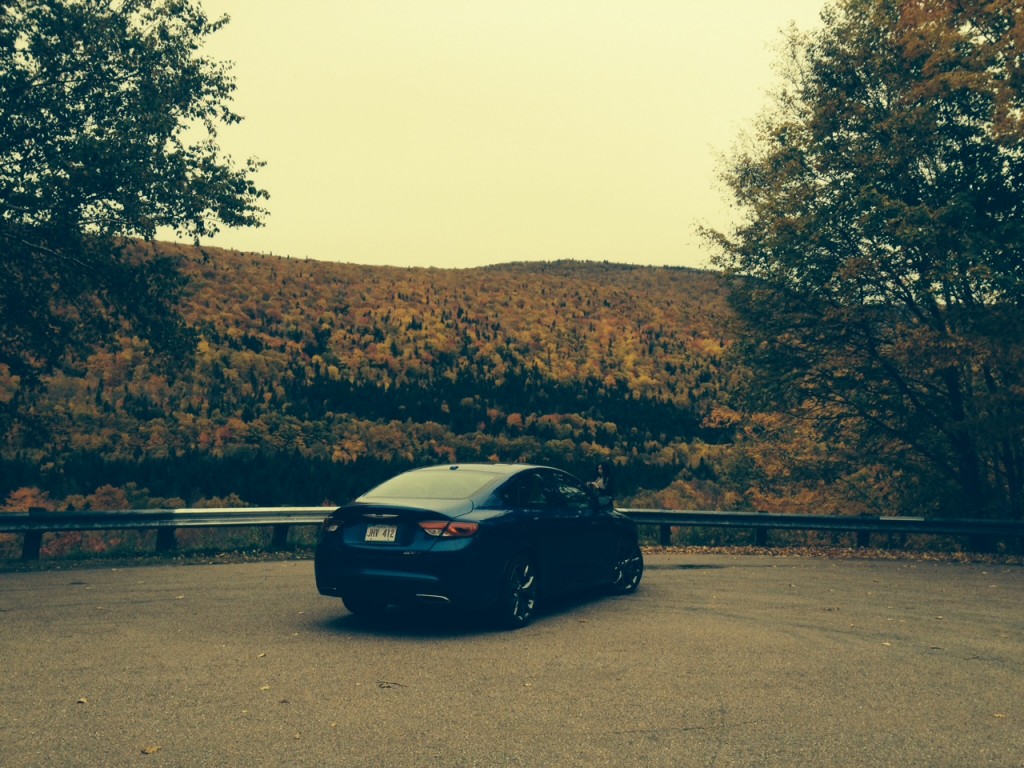 And then we come to the price. At 38 grand for my tester, there are plenty of other choices more suited for the Cabot Trail. The Volkswagen GTI comes to mind, as does the BMW 228i. The good news is your local Chrysler dealership will likely not sell it to you at this price. All you need to do is drive past to see all the insane clear out type deals on the 200 and you’ll see what I mean.

But for regular driving around town the 200 S does well. And its sporting credentials, while not perfect, will likely please those who want a regular family sedan that can inject some minor performance when need be. If that’s you, then get to your Chrysler dealership right now to sop up those crazy deals.