The new Chevrolet Silverado 2500 HD Duramax diesel is officially the largest press vehicle I’ve ever tested. It’s longer than an Escalade and about just as wide.

So you can imagine my hesitation when I learned that I was going to be trying one out for a week. I was downright worried.

I have every bit of confidence in my driving abilities, but I must admit that I was a bit nervous. Our North American roads are huge compared to the rest of the world, yet I still wasn’t quite sure it would fit in some cases.

I had to double and triple check turns. I had to take into account the rather wide turning radius.

Does anyone really need behemoth like this in their daily lives? I drove one to find out. 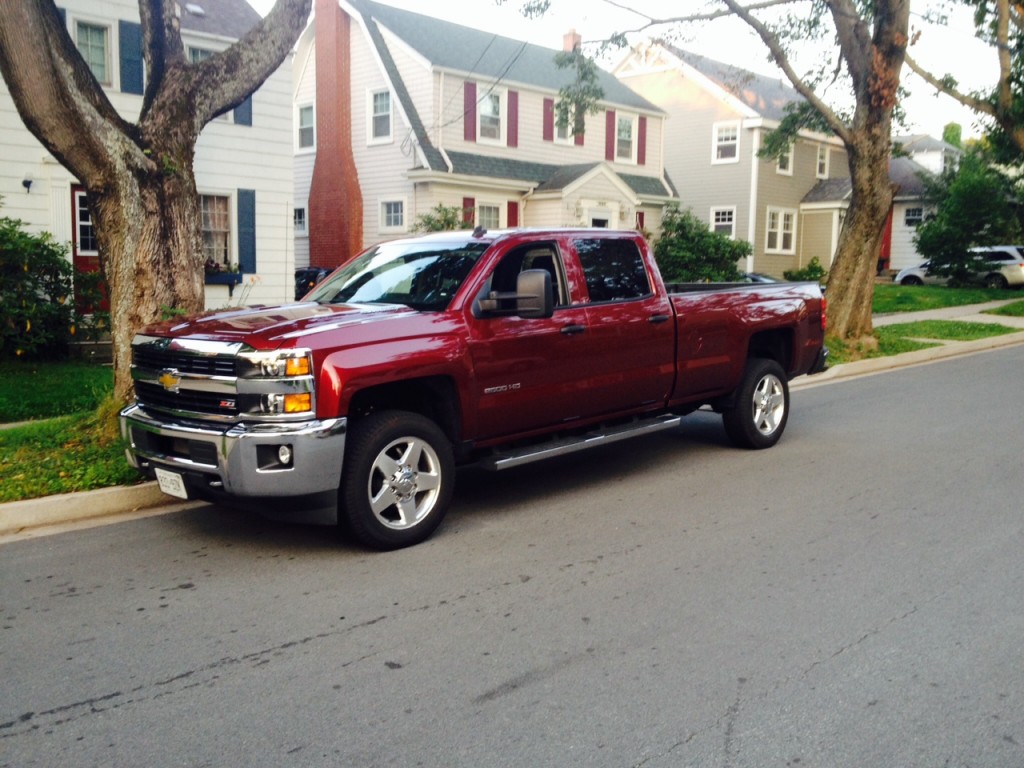 The 2500 series pick-ups have undergone the same redesign as their half-tonne little brothers, that is to say, a pretty minor styling update with a revised front fascia mostly setting it apart from older models. My tester was the Z71 trim which added projector headlights, more chrome and 20 inch wheels among other styling upgrades. This is the first time that I’ve ever thought that 20 inch wheels looks small on a vehicle. The sheer size of the Silverado makes it so, however. Overall the design is “True North Strong” as GM’s marketing department loves to say, and likely won’t offend too many (not counting its mass). To be honest, there are way better looking trucks on the market to my eye though. The Ram comes to mind, for instance. However, there certainly is no mistaking this truck for anything else. 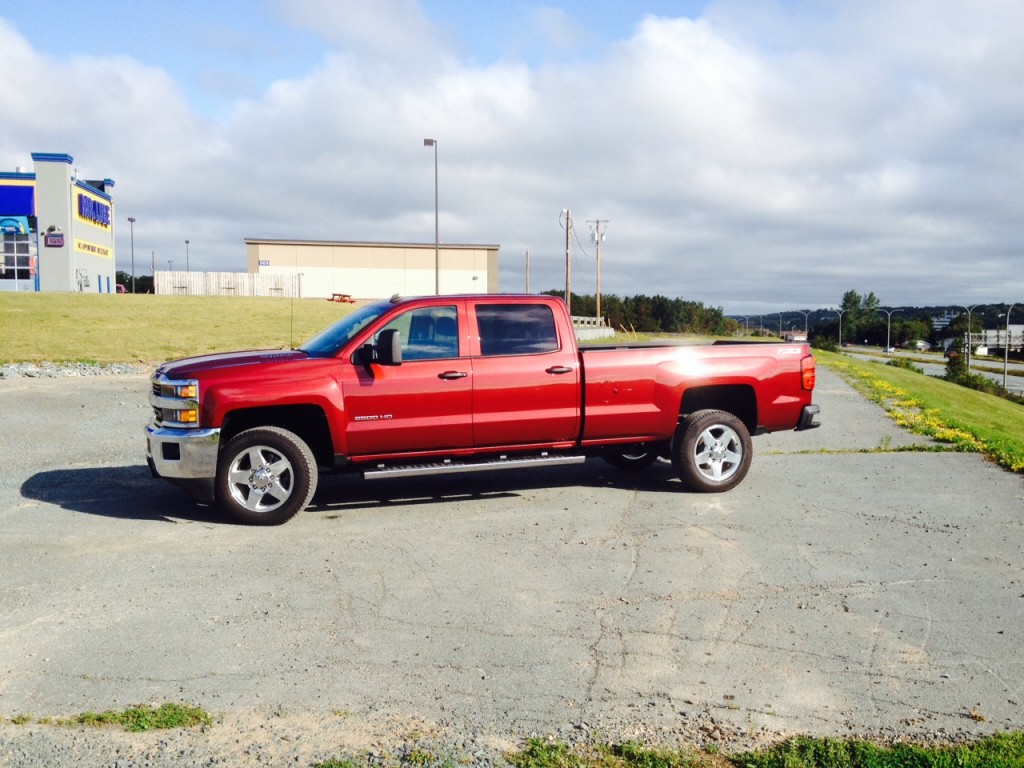 Inside, the Silverado 2500 gets the same interior upgrades as the half-tonne version as well. That means a much more inviting interior that is well laid out. The biggest “improvement” is the addition of Chevrolet’s MyLink system. I put improvement in quotations because the system is still a bit fidgety to my mind. It doesn’t always respond to commands and if you delve too far into all the different sub menus you can get lost quite easily. However, for simple operation such as changing the radio station, it did the job just fine. 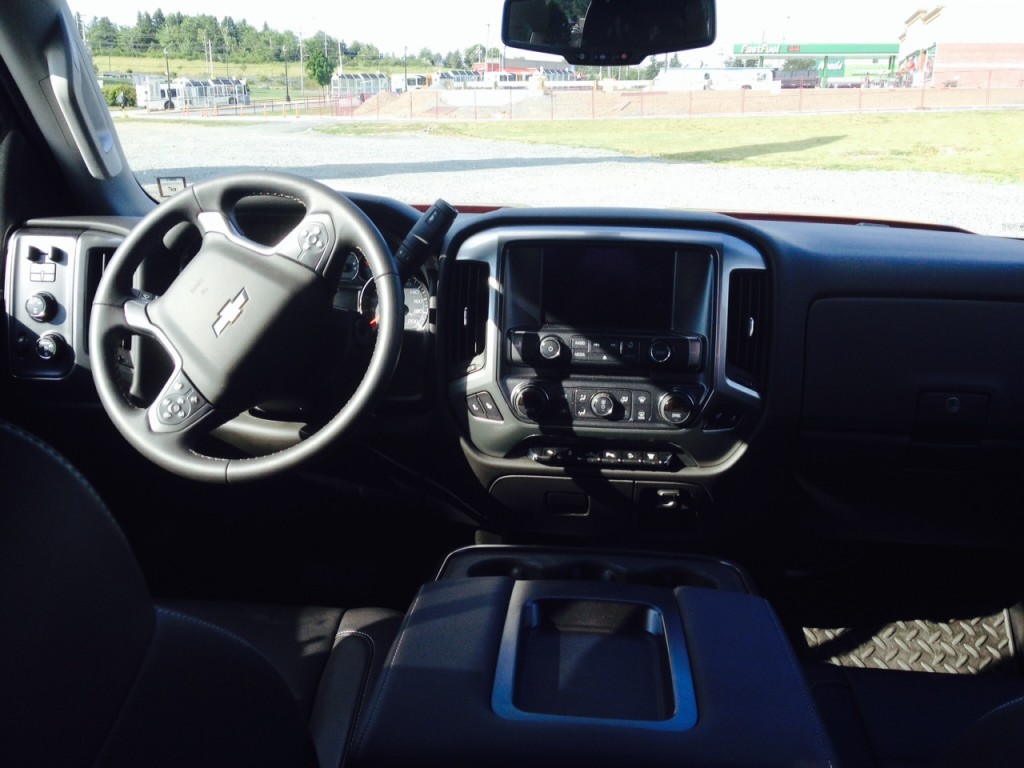 Even though the interior design has improved, it still has a taint of “old GM” about it. It doesn’t look particularly fancy – and some would argue that a work truck shouldn’t anyway- but even the designs for Ram and Ford are a bit more inviting. One thing I need to give GM a pat on the back for is sticking with a column shifter. There’s something oh-so-satisfying about cranking the Silverado into park the old fashioned way. And since this is a very masculine truck, I can’t think of anything better. 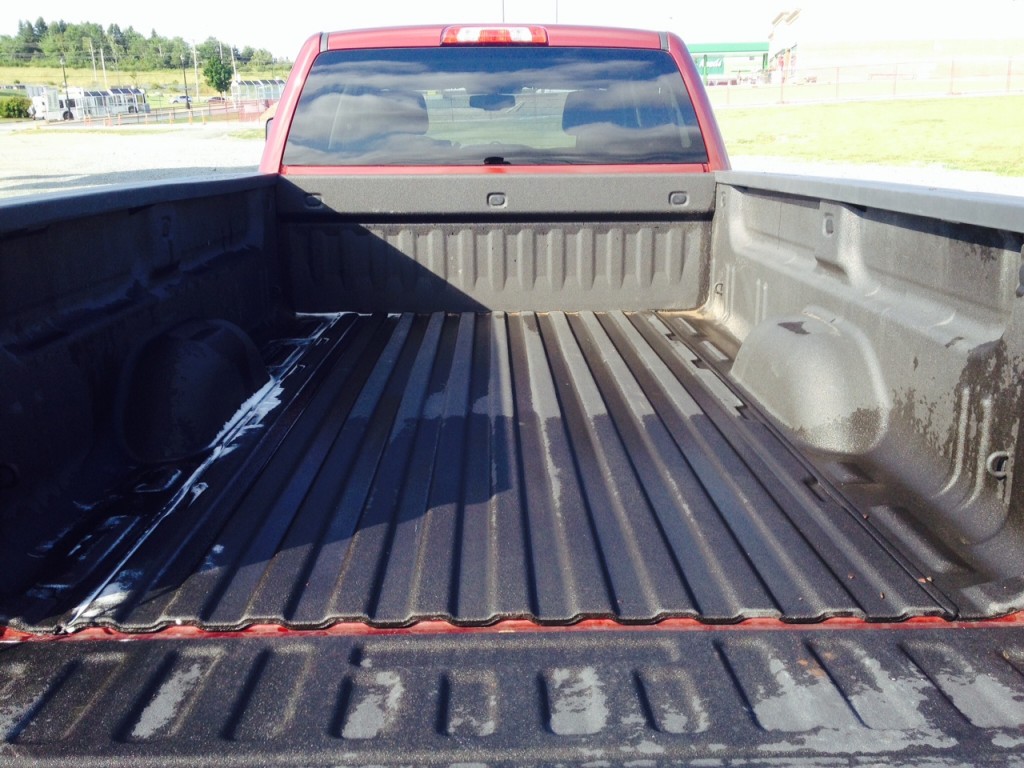 As you can imagine, space is plentiful. It’s cavernous. There will be no issues to accommodate passengers of any stature and the rear seats can be configured to store taller objects, much in the same manner as the rear seats in a Honda Fit. My tester came with the long-bed option increasing cargo capacity even more. My parents had recently bought a new BBQ and asked if they thought it would fit in the back of the Silverado as it would have been a squeeze in their Volvo C30. As it turns out, that question was like asking if you want cheese on your burger – of course! 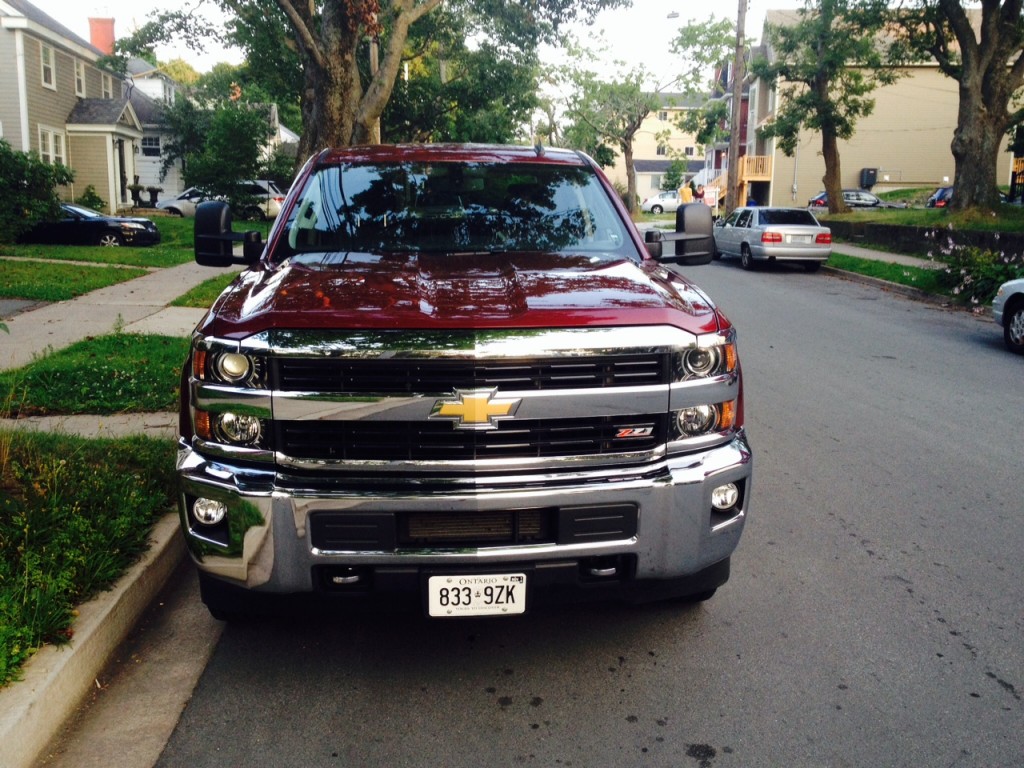 While I knew it would fit no problem, I was still shocked at how much room was left over once we had the BBQ inside the bed. I’d wager you could fit another four BBQ’s back there at the very least with no issues whatsoever. Holy moly that thing has space! And it also takes up a lot of space as demonstrated by the picture below of the Silverado HD in a regular parking spot. 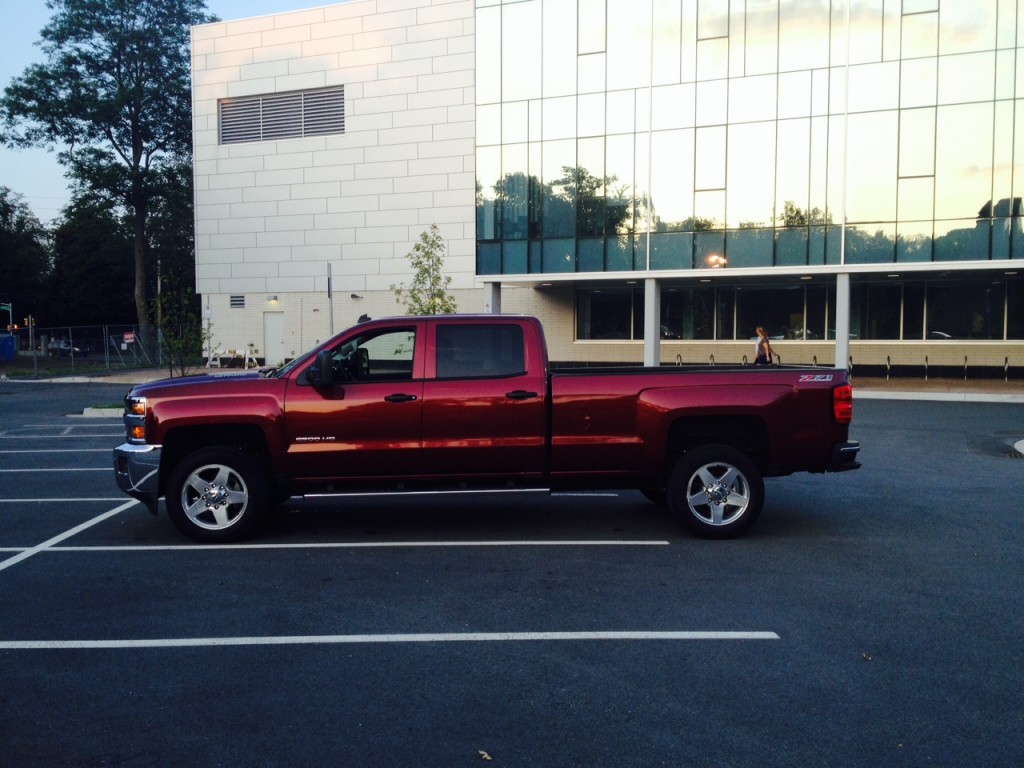 The big news is the engine. It’s a 6.6 litre turbocharged V8 Duramax diesel producing 395 horsepower and an eye-popping 765 pound foot torque. Needless to say, this is one powerful brute. And it certainly sounds the part too. But believe it or not, power isn’t even what this engine does best. Since it’s a diesel, and since diesels are inherently efficient, the Silverado HD doesn’t chug as much fuel as you’d expect it to. 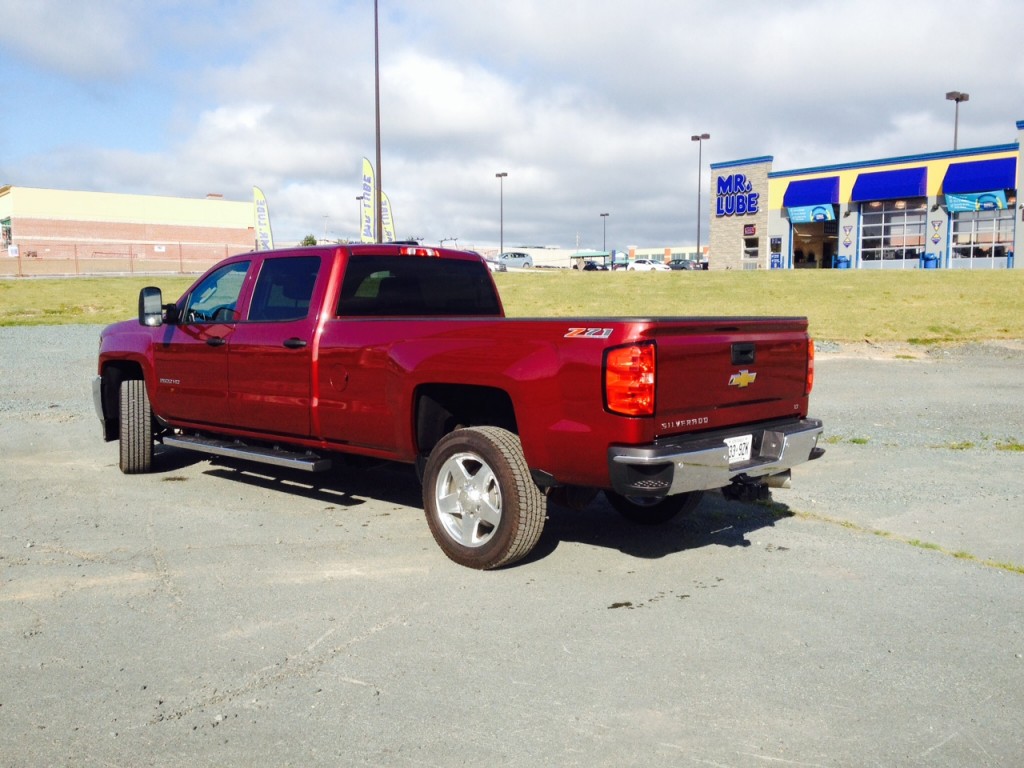 My real world fuel consumption numbers were 13.8 L/100 kms in mixed driving. Yes, that’s a lot my any other vehicle segment standard, but when you’re talking one of the largest trucks out there, that’s pretty damned good especially considering another one of GM’s mid-size car’s that I reviewed last year managed to somehow do worse than that. The tank on the Silverado HD is quite big too at 136 litres. After a week, even generating 13.8 L/100 kms, I only used up half a tank. 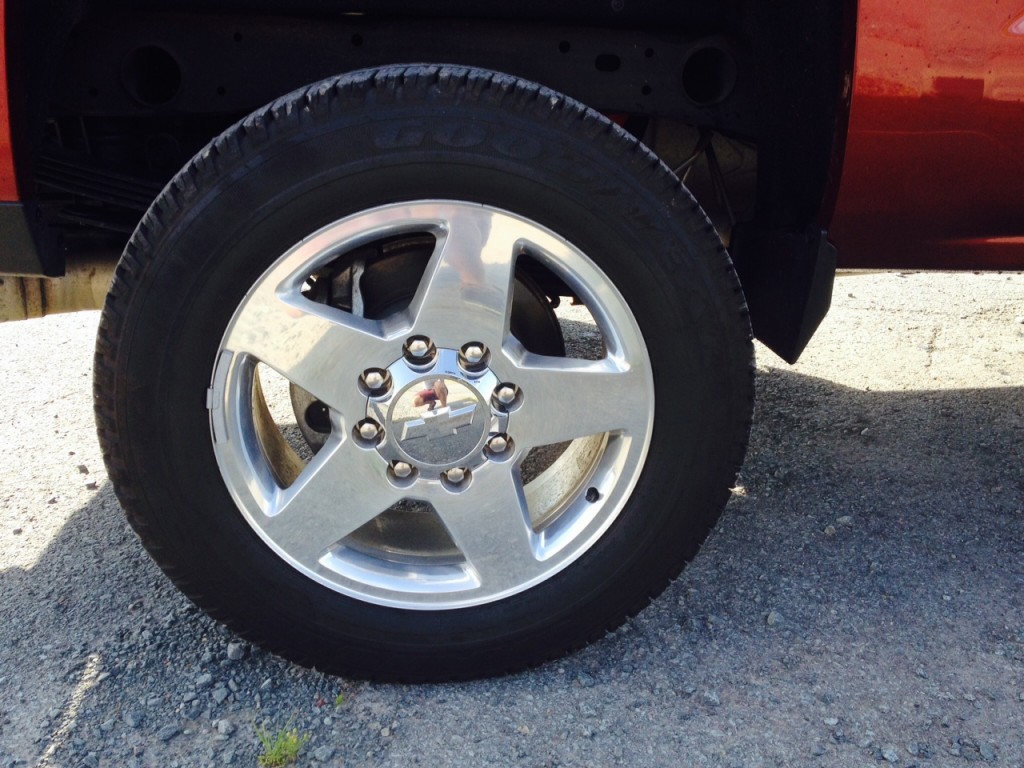 And don’t assume that I just took it easy on the Silverado HD. It really is hard to not take advantage of that torque. Even though the Silverado HD is quite heavy, there is no issues when passing on the highway – the torque is always there when you need it – and overall it is a compliant ride, though not as comfortable as Ram’s innovative air suspension which lowers or raises ride hide to achieve the best aero dynamics. Massive mirrors help to keep you in lane and from side swiping other vehicles though.

Driving the HD around down is a bit like how I imagine a cruise ship drives. You need to plan each turn well in advance and constantly take a wide line for curbs, otherwise you will be leaving your rear tire marks all over them. This takes a bit of getting used to, but it’s necessary. And you can forget about casually pulling into a parking space. In order to do that, you’ll need to make some three-point turns. I found myself parking at the end of the lot and pulling through a spot just because I couldn’t be bothered to be the object of everyone’s attention while I attempt a rather mundane activity. 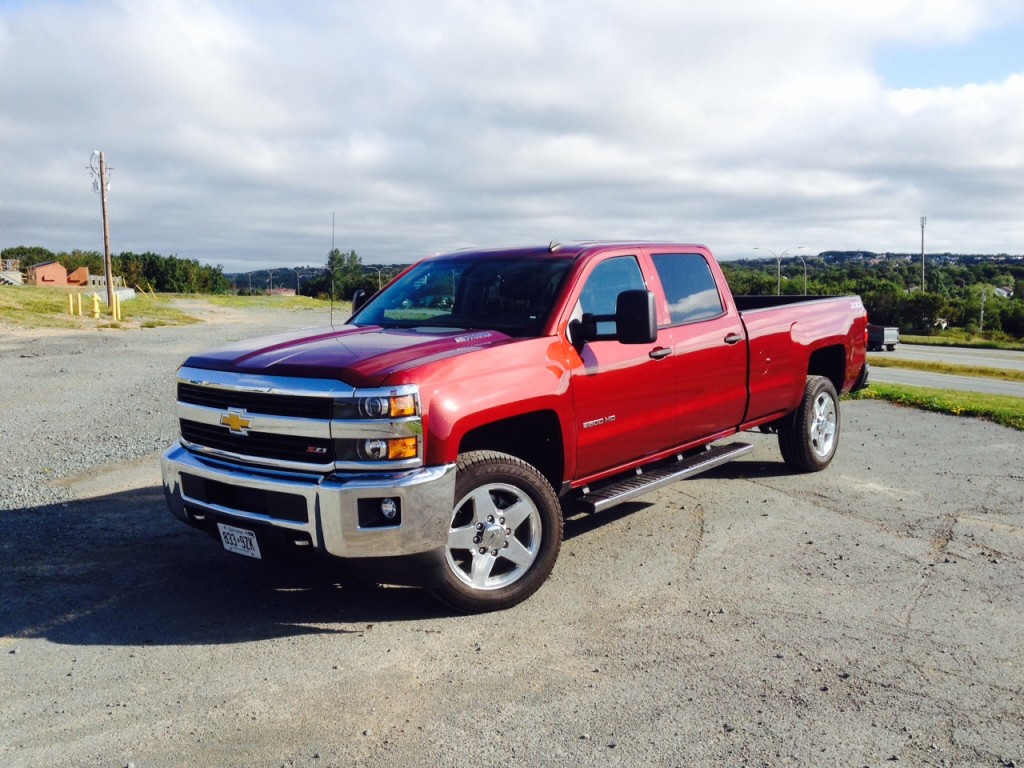 I expected a little bit of backlash or digs from people as I drove around in it. In typical Maritime fashion, the only digs I got for driving such were masked in a polite joke. But to be honest, even though everyone gets out of your way when you drive this thing, it is still a bit embarrassing. A truck like this seems illogical and out of place as a daily driver.

Which brings me back to my original point. Does anyone actually need one of these things as a part of their daily lives? No. A half tonne will do the that job just fine. But a half-tonne won’t do as well as the HD can for towing, hauling, off-roading and pretty much anythign else you throw at it. And that’s why it makes sense for the construction industry or hardcore outdoor enthusiasts. It also does well at impressing 4 year old boys with is monstrous size.  But as a work truck? There likely isn’t anything the Silverado HD can’t do.