There are certain things you don’t mess with. For instance people there are people who feel the need to tinker with seafood chowder. Now, while I can appreciate slight variations and the claim to fame of different family recipes, I’m still a bluenoser through and through (the only true bluenoser in my family) and I gotta say, people who mess with seafood chowder a little too much are a bit like people who use hashtags for literally everything; it’s utterly annoying.

That said, sometimes it can be a good thing. When Ford decided to reinvent the Taurus into what it is today, they arguably saved the brand. Back then, big family sedans were all the rage, even more so than SUV’s and the original Taurus always lagged behind its competitors. Even though the Taurus nameplate now competes in a different segment, it can still arguably hold its own.

Toyota knows what it’s like to lag behind (believe it or not). While Toyota is known as being among the best of the best for fuel efficiency and reliability, that only gets you so far in the half tonne pick up truck segment. While Toyota has consistently improved its offering, it seemed as thought the big three American companies were always one step ahead.

So now, Toyota is taking a bit of a step back. It’s starting to think that it has a good thing going for it like seafood chowder and doesn’t want to mess with a good thing too much. New for 2014 the Tundra gets an interior and exterior facelift, but Toyota is sticking with the same power plants it has used since 2007. 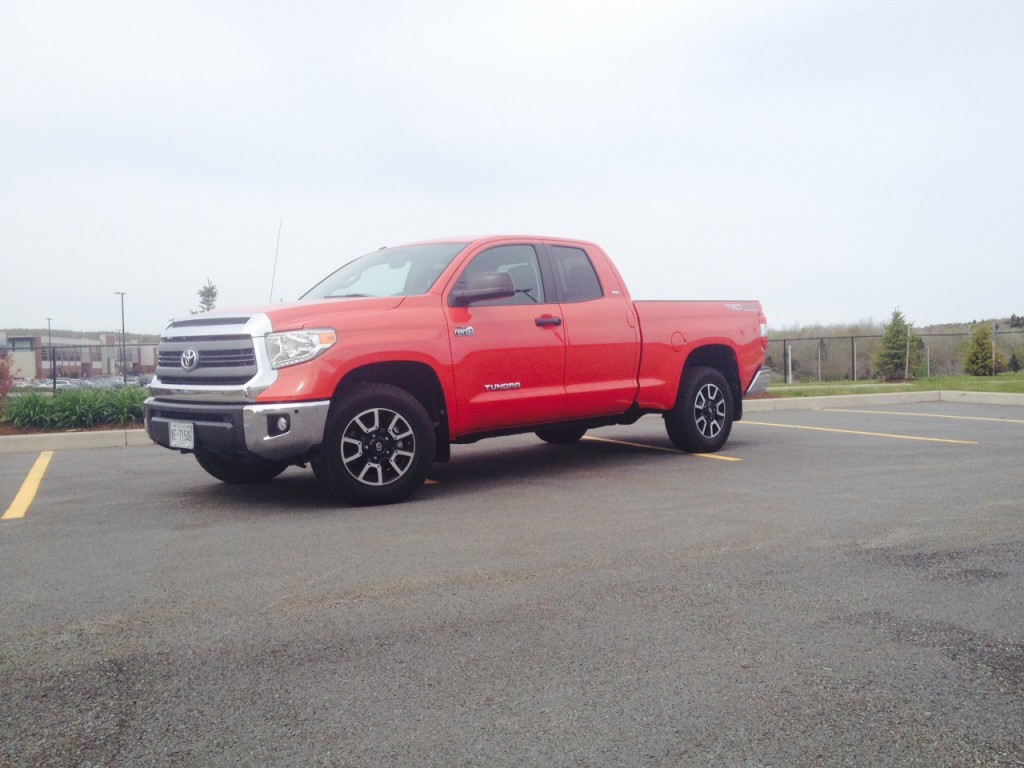 First things first, let’s get to what has changed which is largely the exterior. While I found the old Tundra to be a fairly handsome brute, it’s clear that Toyota wanted to inject a lot of extra testosterone into the design and boy have they succeeded. With perhaps one of the most ‘manly’ front grilles I’ve ever seen, the new Tundra definitely has road presence with its tri slated grille and its aggressive stance thanks to the TRD package which gives it a noticeably raised ride height and rather eye catching 20 inch wheels wrapped around chunky rubber. Out back, the high lift gate with  “TUNDRA” embossed into it makes it almost Tonka truck-like. Matched with its screaming red paint, and you’ve got yourself quite the looker. I’m not sure that I would call it the best looking truck around (I’d personally still give that nod to the Ram 1500) but it’s definitely quite obvious that Toyota wants people to think that this is also indeed one of the big boys. 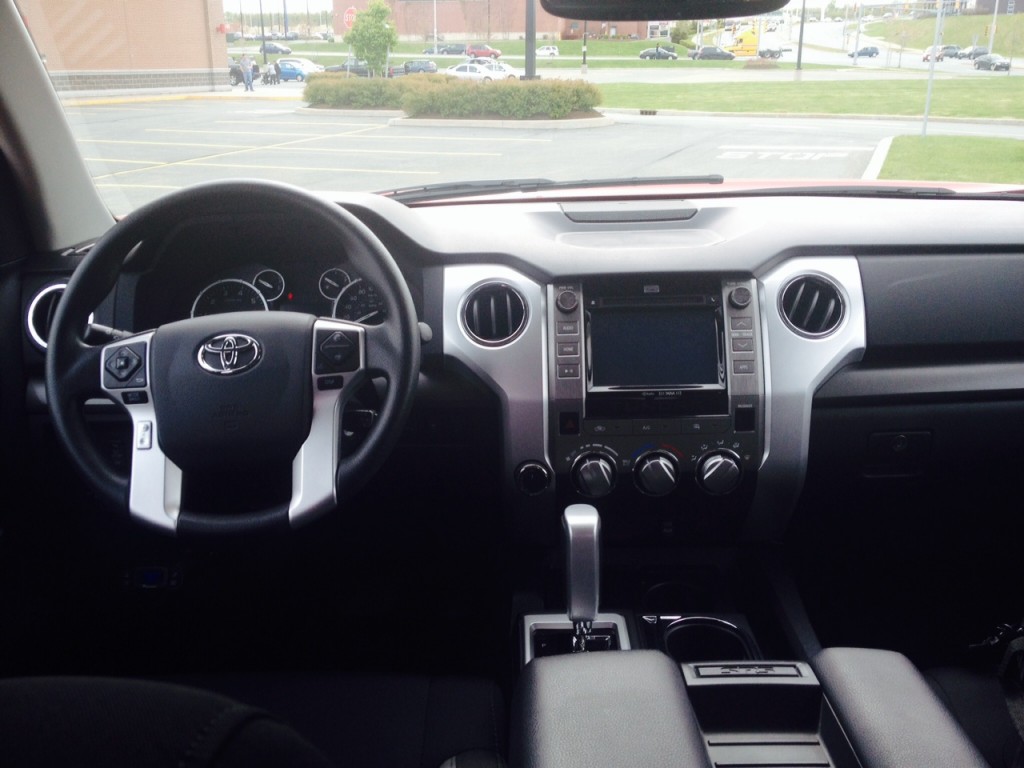 Inside the cabin is much more refined. Toyota seems to have learned from its past that there is such a thing as overdoing it with masculinity (with the interior anyway). The massive knobs were just a tad but much, so Toyota has dumbed those down a bit with much more regular sized knobs. On top of that, they have included nicer materials that scream finesse more so than machoism.  There is a massive storage area in the centre console that will literally swallow just about everything (sometimes it was even hard to locate items thanks to that depth) and the centre screen is finally a lot closer to the driver than in previous Tundras. The touch screen is decently clear and responsive, as is the back up camera which is a complete necessity at this point for most half tonne pick-ups. The one thing my tester did not have was sensors which may be helpful for more vertically challenged drivers, but overall the Tundra isn’t too difficult to park as long as you’re aware that getting in and out will be an issue most of the time. 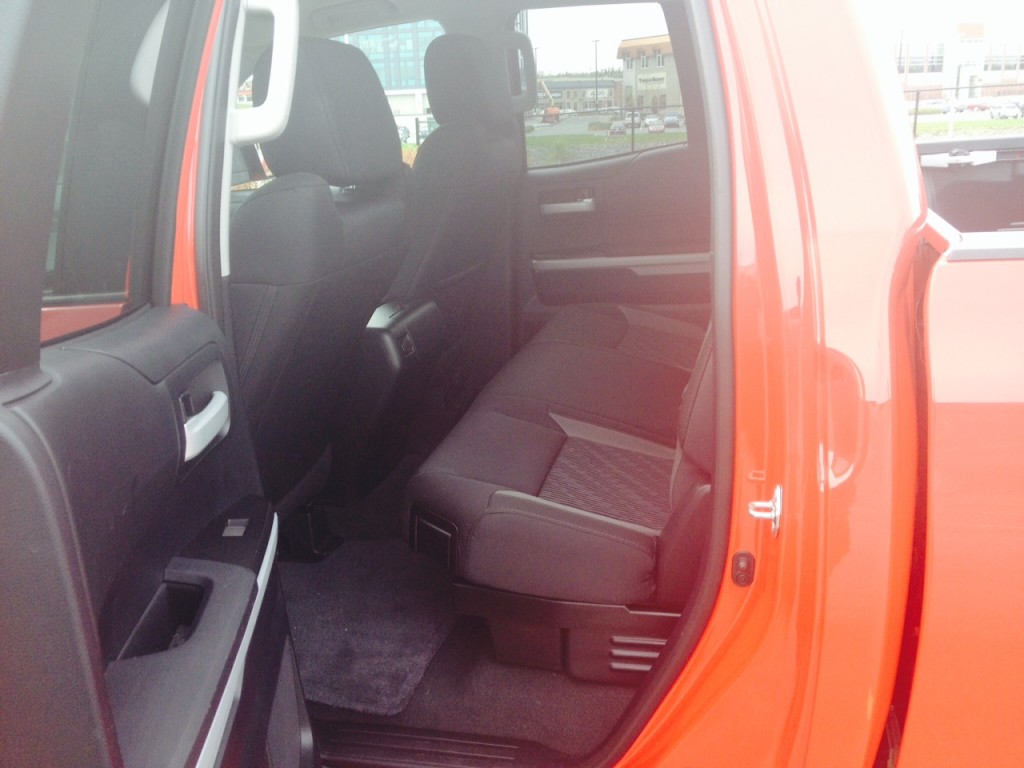 I’m just shy of six feet tall and I struggled to get in and out. The Tundra’s extra ride height would be challenging for most, but the lack of a step bar is a bit mind boggling. I know, I know, step bars impede off-roading abilities, and to be fair the TRD packing allows for easier off-roading, but keep in mind that most pick-ups double as family cars these days. Almost passenger I had with me commented on the difficulty of getting in and out. On top of that, oddly enough, there is no grip handle on the driver’s side so you have to rely on using the steering wheel to prop yourself into the cabin and this inevitably engages the steering wheel lock. Unless I actually lived in the wilderness 80% of the time, I would find the lack of a step bar quite annoying. 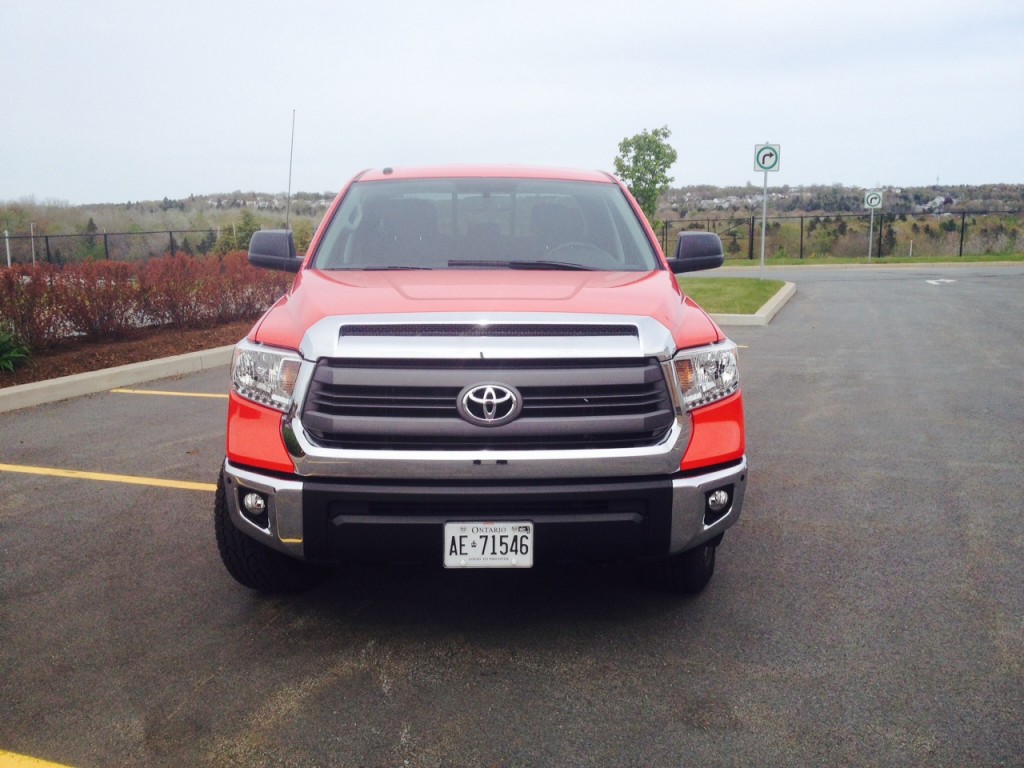 The good news is room is plentiful, as you’d expect, even in my tester’s double cab configuration. Rear leg room was quite good and comfort was never an issue. Obviously you’d get more legroom if you went for the crew cab, but to be honest, I think the double cab is adequate. 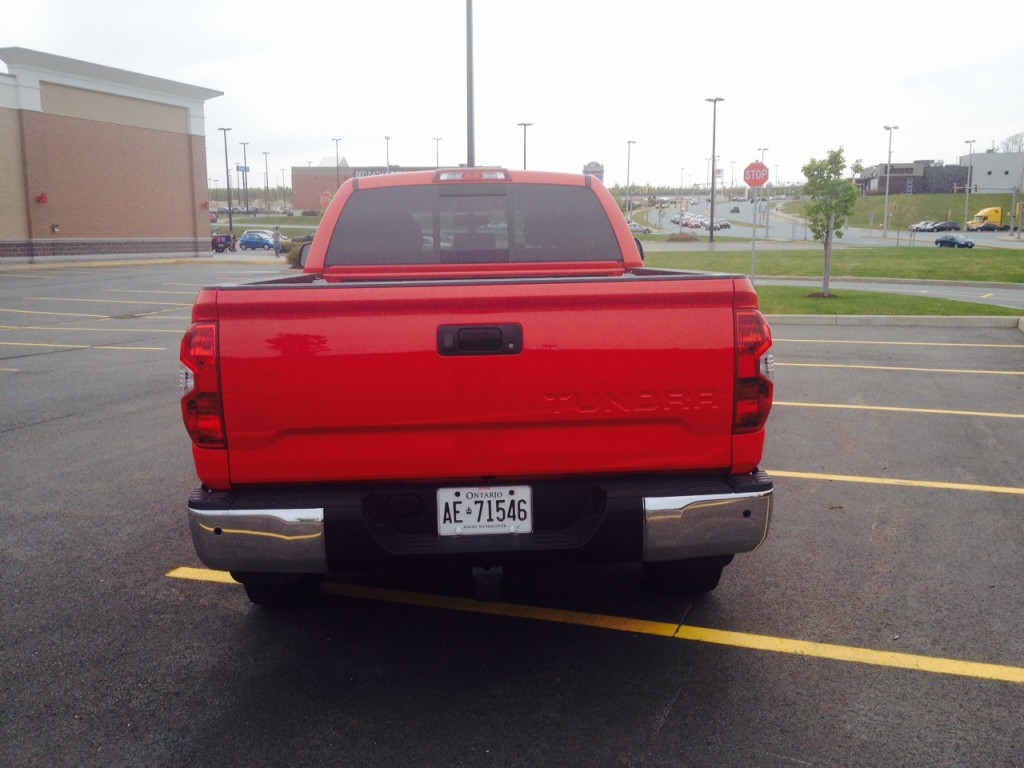 While other truck makers are making fuel efficiency one of the main priorities through light weight, cylinder de-activation, 8-speed automatics and diesels (to name a few), Toyota has decided to continue to ride the wave with its power plants including the 5.7 L V8 equipped to my tester. It produces 381 horsepower and 401 pound foot torque. As you can imagine, that is plenty adequate and the sound is truly intoxicating even at start up. This engine makes you feel like you can take on just about anything. While I never got the chance to test it, towing shouldn’t be an issue, however my worry would be the high RPM range that you’d experience while toying uphill. The year ratios as spaced nicely enough for spirited driving, but I also found the transmission didn’t upshift when it probably should have. 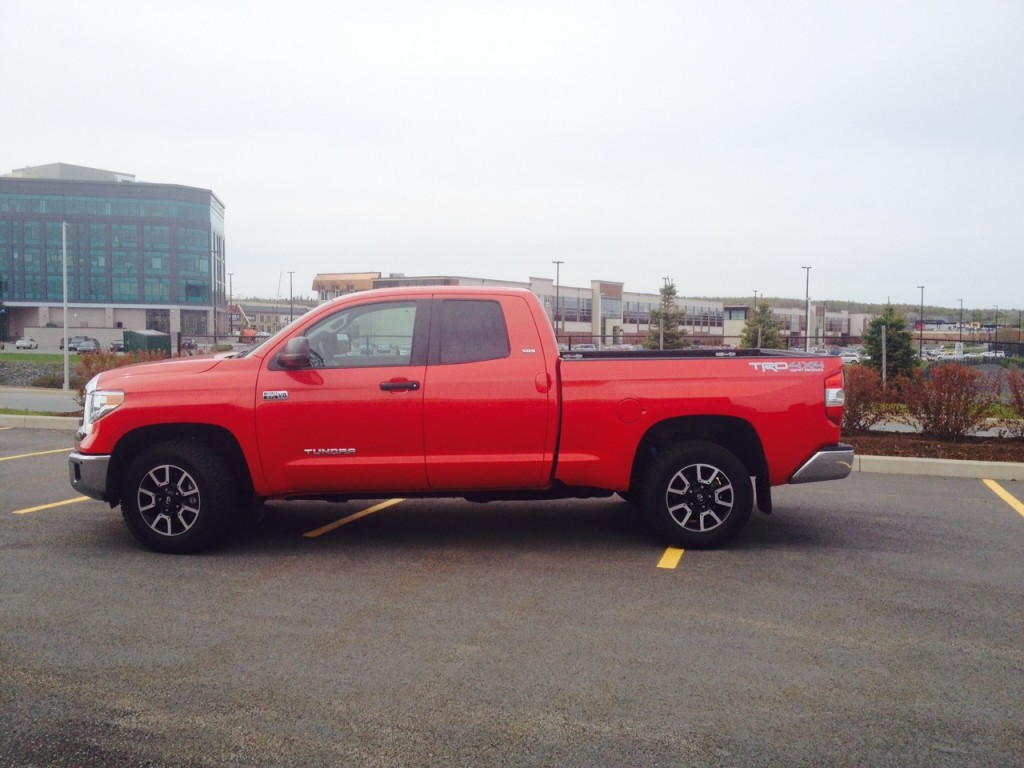 Speaking of spirited driving, try not to do much of it if you value you the money you make every day. It’s been a very long time since I’ve had a test vehicle that returned such poor fuel economy. Officially, the Tundra  5.7 L is rated at 18.1 L/100 kms city and 13.8 L/100 kms highway. In mixed driving, my real world fuel consumption figure was an eye-popping 19.2 L /100 kms. In fact, that might be the worst return I’ve ever received in any press car. I didn’t even have the Tundra for a full week and I still needed to fill it before returning it, otherwise I would have ran out of gas. 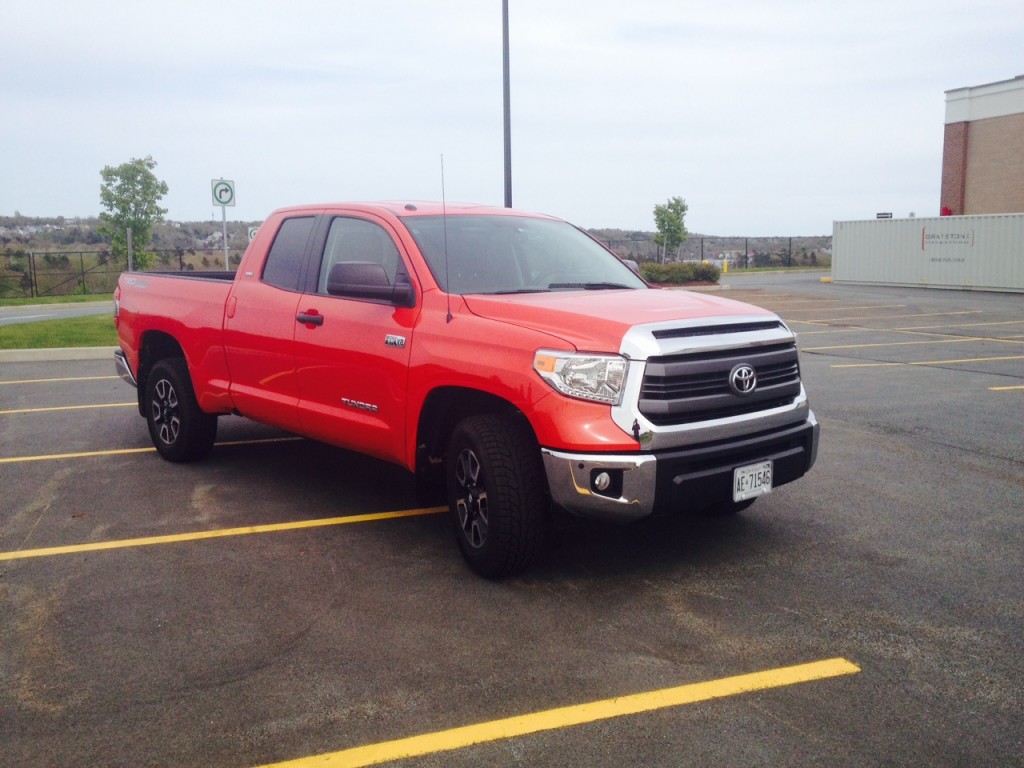 Another reason to avoid spirited driving in the Tundra is the fact that its handling abilities aren’t confidence inspiring at all. The TRD’s off-road suspension set up allows you to feel lots of bumps and potholes and taking a corner is a bit like taking a sharp corner while on a boat. The steering is rather numb on top of it all. I’m not expecting the Tundra to handle like a Ferrari but I’m also hoping to make a turn without the feeling that I need to overcorrect all the time. 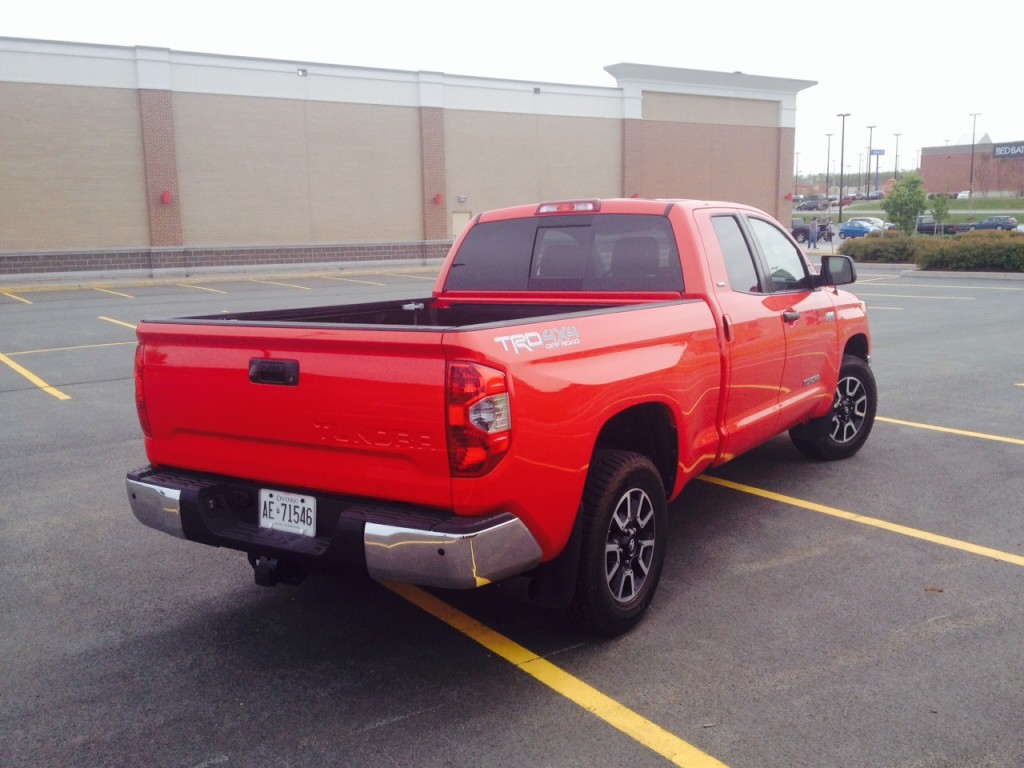 Overall, I liked the Tundra. The problem is I like the offerings from Ram and GM even more. Unlike taking the safe route and not messing around too much with seafood chowder, both companies have introduced innovation into the segment (I would include Ford as well with its upcoming 2015 F-150). While the old Tundra was decent, it still isn’t enough to ride on for sales. While Toyota is okay to do some admittedly good interior an exterior styling changes, the big three are content to leave it behind. 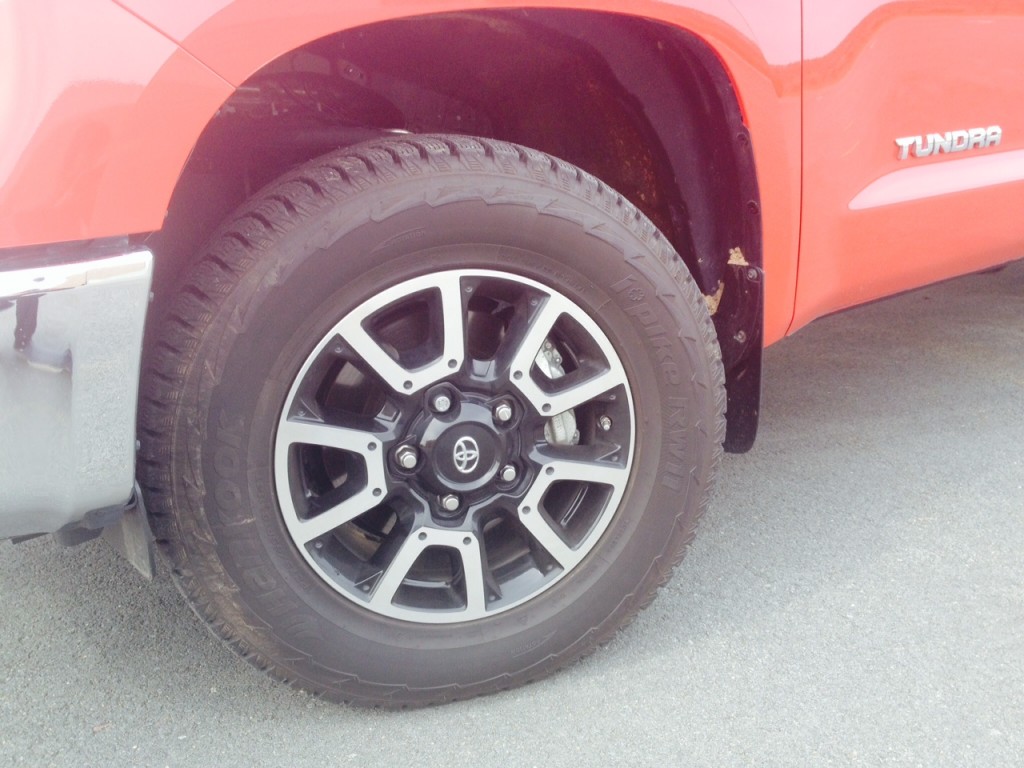