Even if you are completely unfamiliar with pick-up trucks, chances are you’ve heard the loud diesel clatter than come from the heavy duty trucks or bigger at least once. The reason why these massive machines are equipped with a diesel is mainly for its torque and therefore towing and hauling abilities. Makes sense, right?

So why has it taken so long for a half tonne pick-up to gain a diesel? You’d think since pick-up trucks are volume sellers in North America and since North Americans are relatively conscious of gas prices that it would be a no-brainer.

But would you believe in 2014 there’s only one that gets a diesel option from Ram? Why has no one else thought to do this? Could there possibly be a downside?

I took one out for a week to find out. 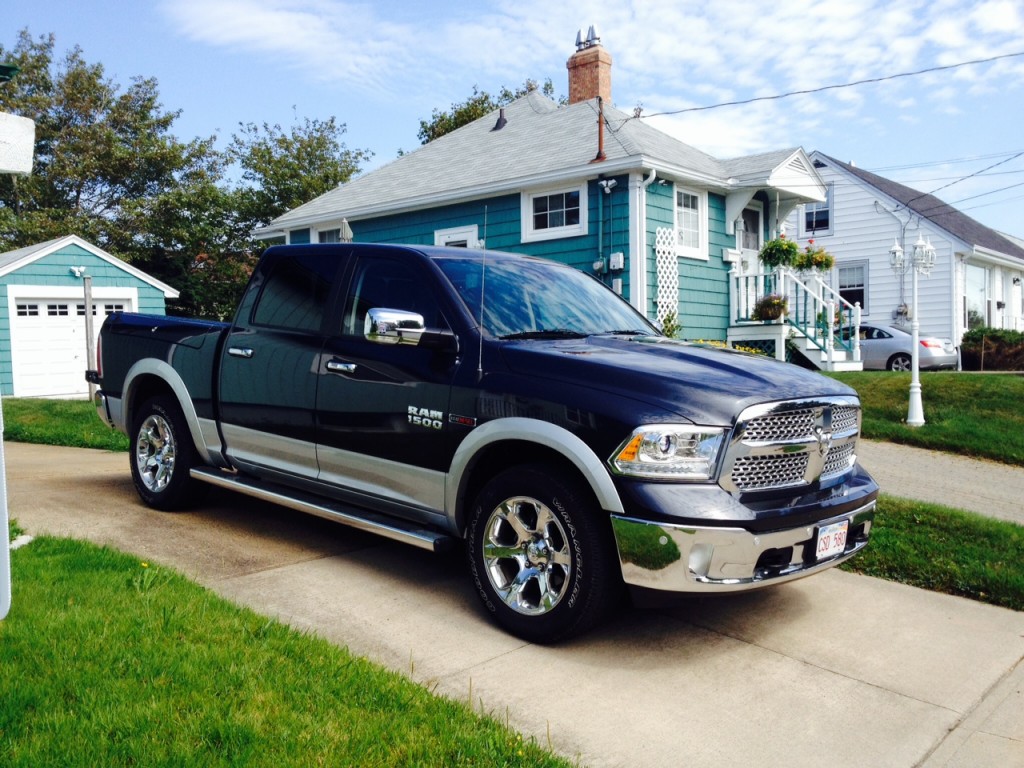 Looks wise, there isn’t much to distinguish the EcoDiesel from its gas engine counterparts. In fact, the only give away is the badging on the side. Everything else is strictly Ram 1500 – now updated – featuring LED lighting both up front and out back, some new wheel patterns and, crucially, the brilliant 8-speed automatic now found on most trim levels. It continues to be the best looking pick-up truck available to this author’s eyes, even if the massive chrome grille, wheels and splashes throughout are a bit gaudy to me. 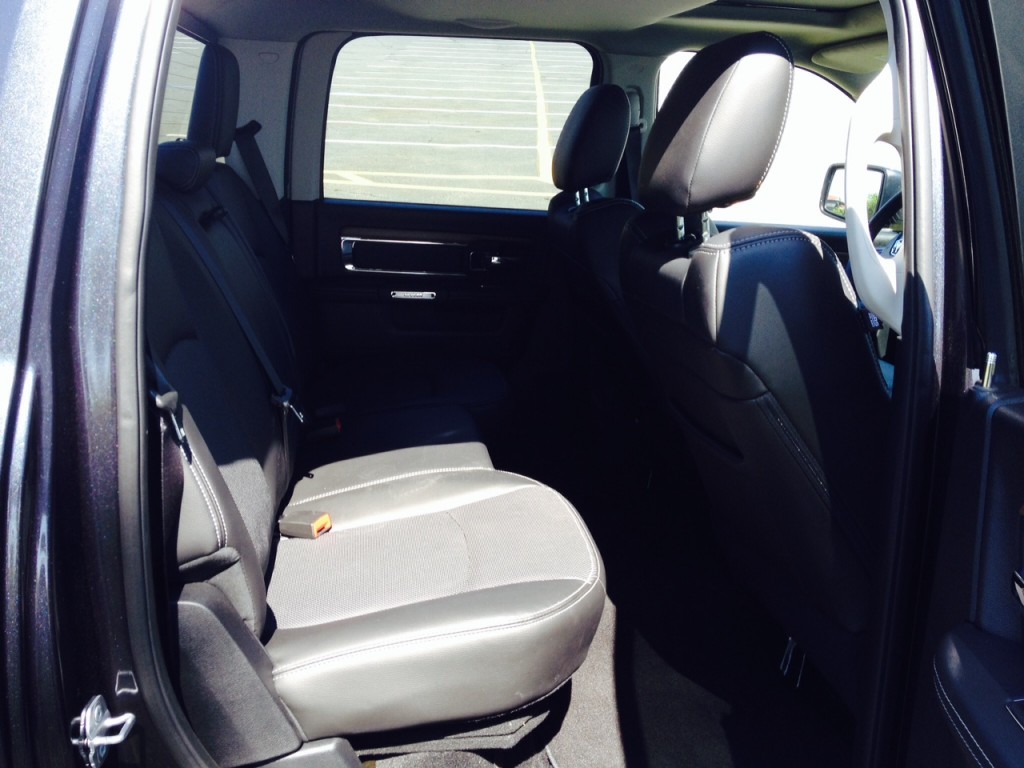 Inside, you’ll find an excellent layout. The Laramie edition nets you a two-tone interior to boot along with Chrysler’s excellent U-Connect infotainment system which is viewed on a big clear 8.4 inch screen. Honestly, this system is the least glitchy system I’ve experienced and is among the easiest to use.

Comfort is not an issue either as everything feels a bit more luxury oriented than you’d expect from a truck. An unexpected thing to find in a truck is a dial for the shifter rather than a column shifter. While you do eventually get used to it, I definitely prefer a big clunky shifter in a truck like this. 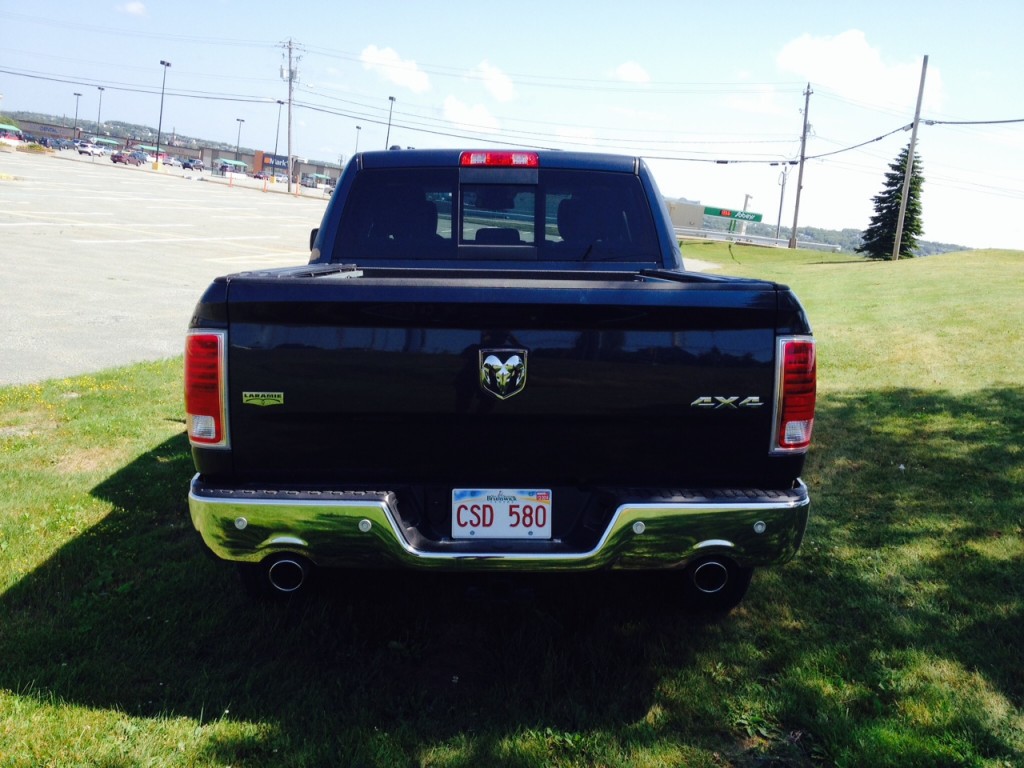 Interior room is plentiful as is the rear seating in my tester’s crew cab configuration. This rig could easily double as a full-time family vehicle. My tester was equipped with the $1,500 Rambox option which gives you decent, lockable storage areas over the wheel wells. You can fit groceries, toolboxes, fishing rods – you name it – most will fit. And if it doesn’t, well that’s what the bed is for, isn’t it. The only downside is the Ramboxes do intrude in terms of space, so the width of the box becomes compromised, but I’d wager it’s still adequate for more daily jobs. For instance, there was no issue when I helped my parents move a few heavy items from an income property they own. 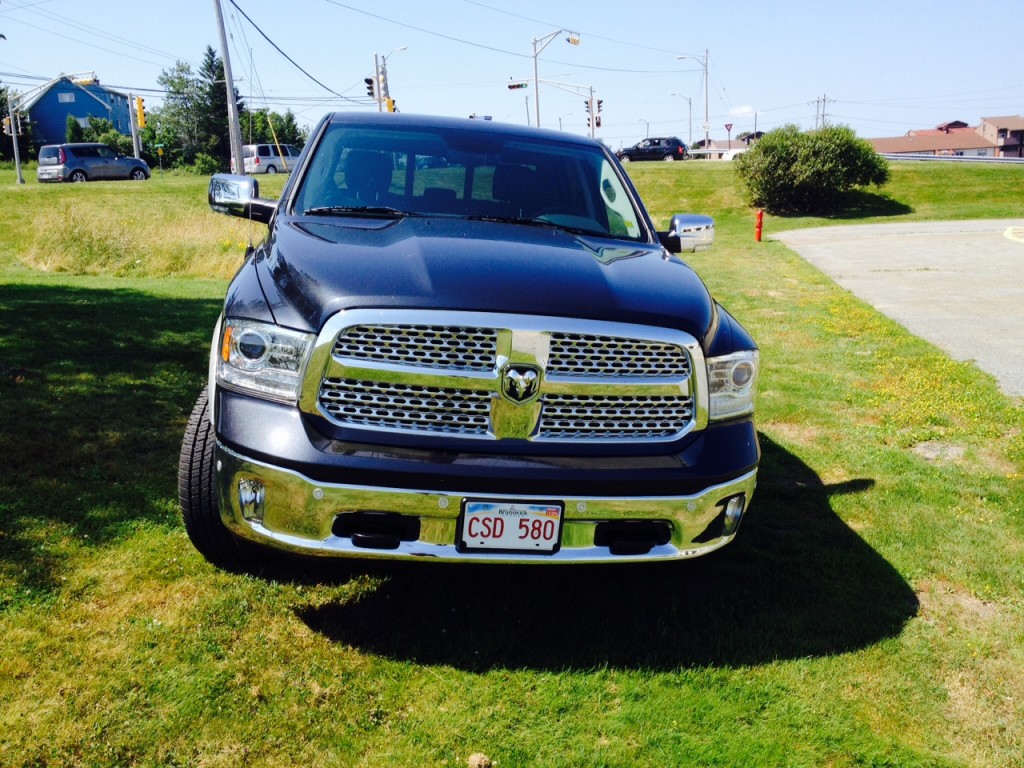 Those who took a ride in the Ram 1500 EcoDiesel were appreciative of the step rail for easy entry and egress and they were likewise quite impressed with the Ram’s overall fit and finish. They were impressed with how comfortable the ride was and even how quiet it was. Indeed, for a diesel, this thing is quite hush. You only really notice the classic diesel clatter at lower speeds such as backing out of a driveway or negotiating tight turns in parking lots. The smoothness of the engine was mentioned more than once. 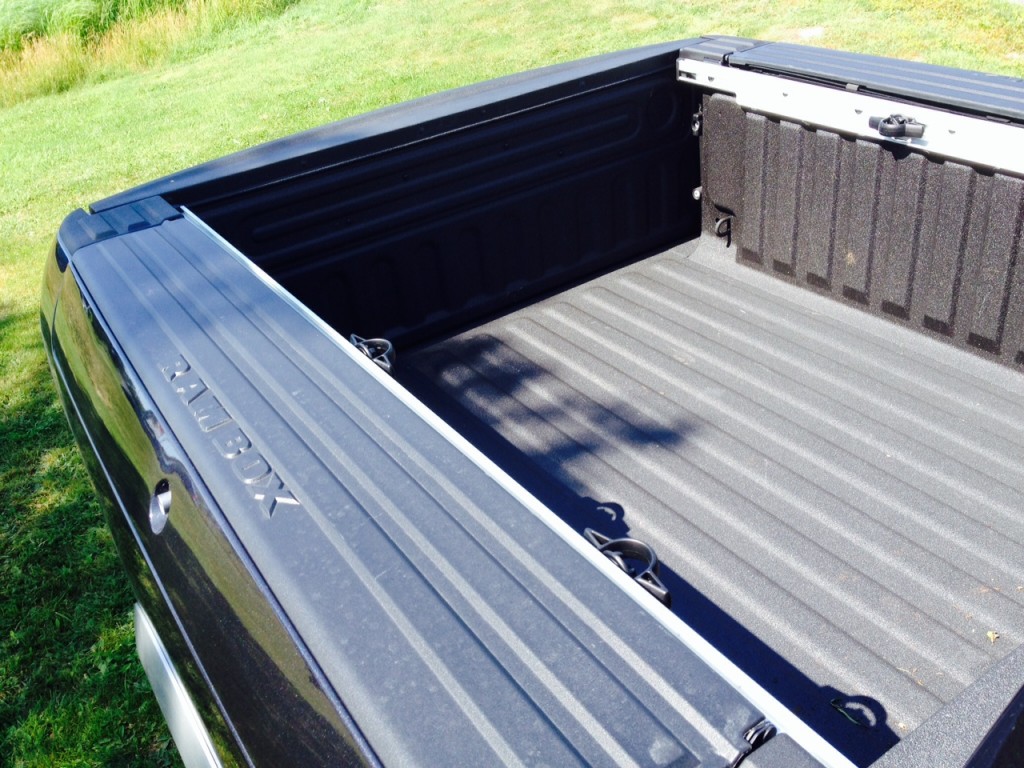 Part of the reason why can be chalked up to the Ram’s wonderful 8-speed automatic. The system is one of the few automatics that knows what gear it should be in with very little hesitation and if that need changes, it can up or downshift and the blink of an eye. It’s all very seamless and there’s little harshness to the gear changes. Like I said, it’s a brilliant pairing. 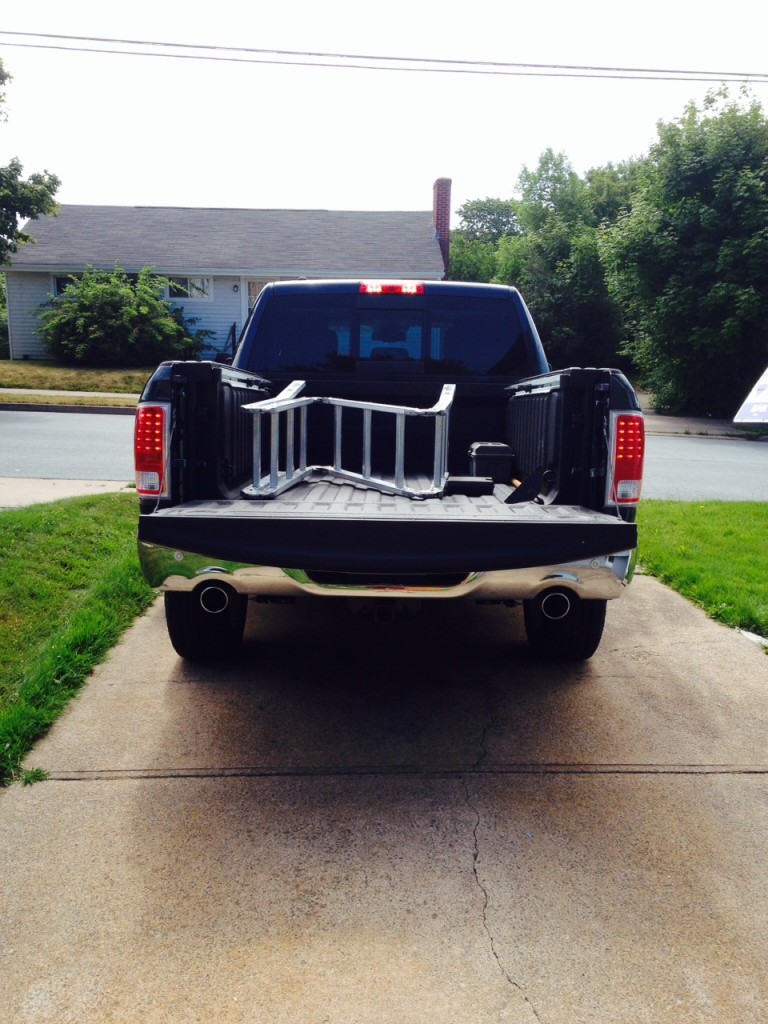 The EcoDiesel is a V6 diesel producing 240 horsepower and a very healthy 420 pound foot torque. Tip in is a bit slow on the reactionary side of things, as is pick-up when you really put your foot down, but luckily that hesitation is brief. Overtaking is an effortless task as is highway driving in general thanks to the Ram’s large side mirrors, blind sport warning and adaptive suspension which lowers to the most aerodynamic ride-height for the speed you are traveling. 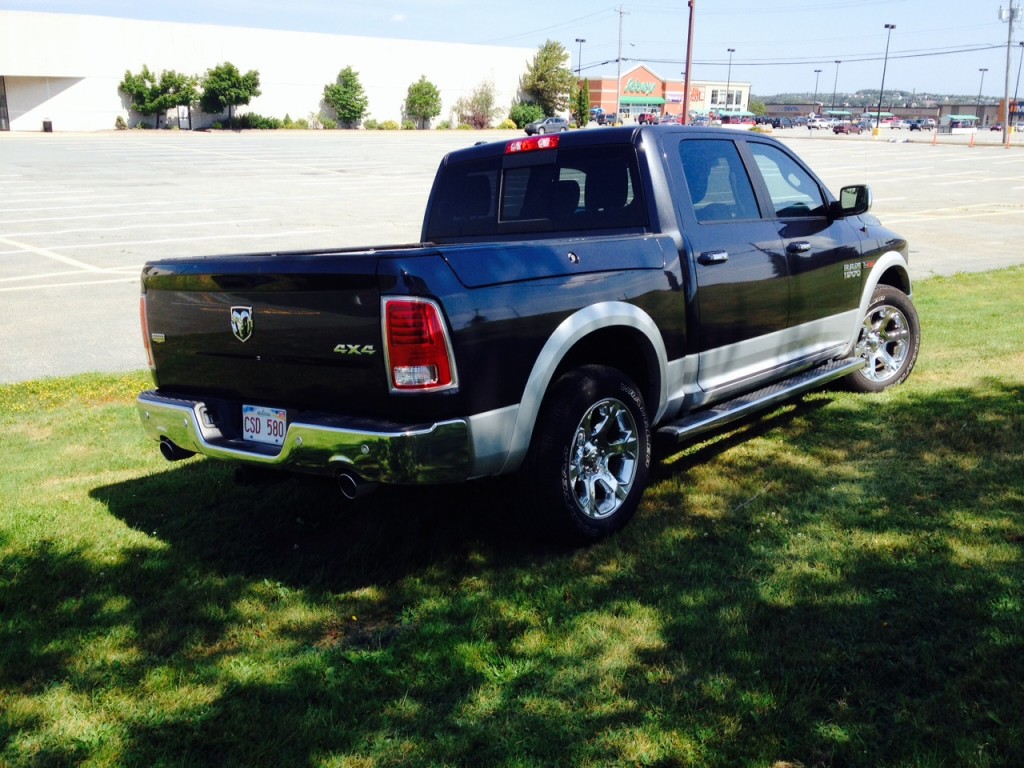 That, matched with that 8-speed automatic and the inherent efficiency of the diesel made for 11.6 L/100 kms in real world mixed driving. Officially, the Ram 1500 EcoDiesel is rated at 12.1 L/100 kms city and 8.8 L/100 kms highway. Considering I was able to meet those ratings in the first place is rather impressive let alone the fact that smaller SUV’s and even mid-size sedans achieve similar numbers. That, in turn, makes the Ram EcoDiesel a no-brainer, right?

Well, not so fast. Remember how I was wondering why more truck manufacturers aren’t slapping diesels into their half tonne pick-ups? Well, it seems there could be two reasons:

1) Cost. Developing, implementing and refining a diesel unit is quite pricey. And guess who that cost gets passed down to? That’s right. The EcoDiesel is an option worth $4,500 to $5,500 depending on the trim level you choose. As efficient as it is, it will take a long time to recoup those savings.

2) Most truck manufacturers are making traditional gas engines quite efficiently anyway. For instance, Ford’s new Ecoboost engines are promising to be the bees knees, while GM is confident they can achieve impressive numbers as well through their gas engines. While they still may be short of a diesel, some of them aren’t far behind the Ecodiesel and they don’t have a price premium.

And speaking of price, holy moly, that’s a lot. I know in North America, for some reason, it is common to drop $70K on a pick up truck, but still, that’s a lot of mula. The only saving grace is that the engine/transmission combo plus the interior comfort and tech could make it somewhat justifiable. Plus, you can still get the diesel in lesser trim levels/bed configurations.

At the end of the day, it’s likely that there will be a few nice discounts to be had as well. Since this is the first half tonne with a diesel option, some may be put off a bit since most don’t like change. They like the familiarity of a regular V6 or V8 making the ecodiesel much more affordable. Either way, the Ram 1500 as a truck is top notch no matter which engine you equip it with.