So, you’ve forgotten that Lincoln exists…

I don’t suppose anyone could blame you. After decades of Ford slapping on a Lincoln badge to Ford product, there wasn’t really a compelling case to pay the premium for one. Therefore, no one really bought any Lincolns.

That’s why you’d be forgiven if you forgot all about the Lincoln Mark II, the Blackwood, the MKS and even the MKT. Likely the only Lincolns you saw around town were Town Cars and Navigators and even those weren’t bought by regular civilians. Celebrities, limo/taxi drivers and government officials were really the only people that used them. 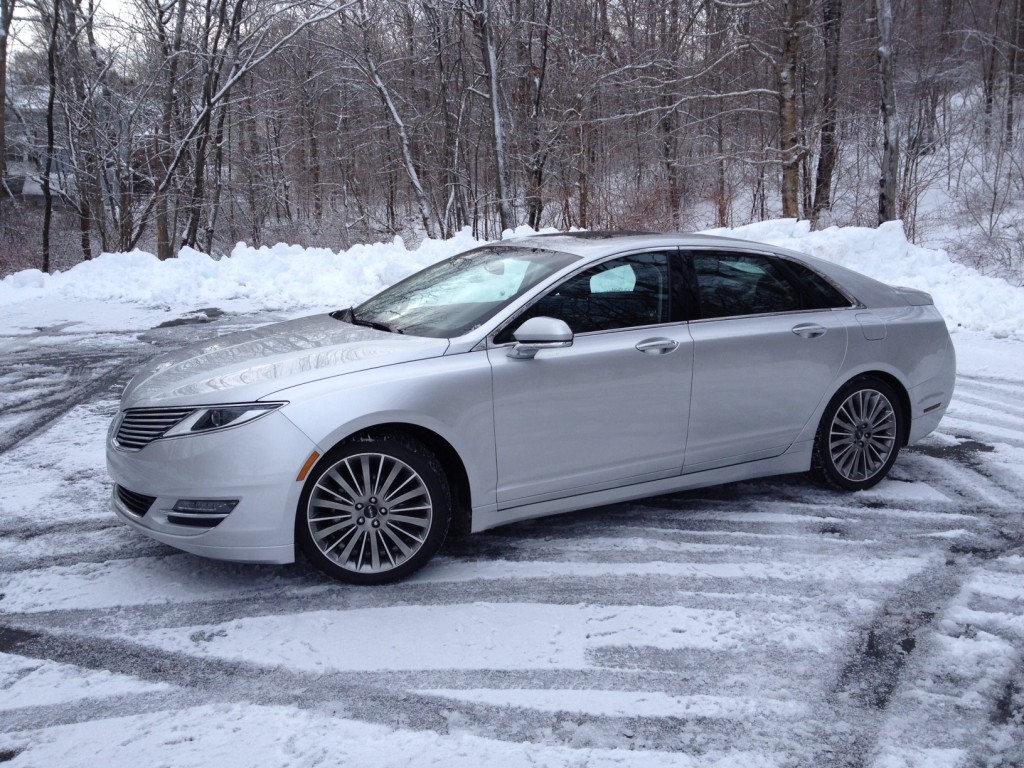 In fact, things were so bad that everyone expected Lincoln to be on the chopping block when Ford gave Mercury the ax. Sidebar: Ford killed Mercury in our market well over a decade ago, which is why you haven’t seen that brand around much either.

It had to have been a tough decision for Ford. Sure it would have been easy to just get rid of the money-sucking brand, but then that would mean Cadillac would win. You see, Cadillac and Lincoln have a rivalry similar to BMW and Audi (albeit, not nearly as intense). And Cadillac has been winning. With the award winning CTS, ATS matched with the volume selling Escalade – and the SRX not doing too badly in sales, Lincoln really is the clear loser in the rivalry. 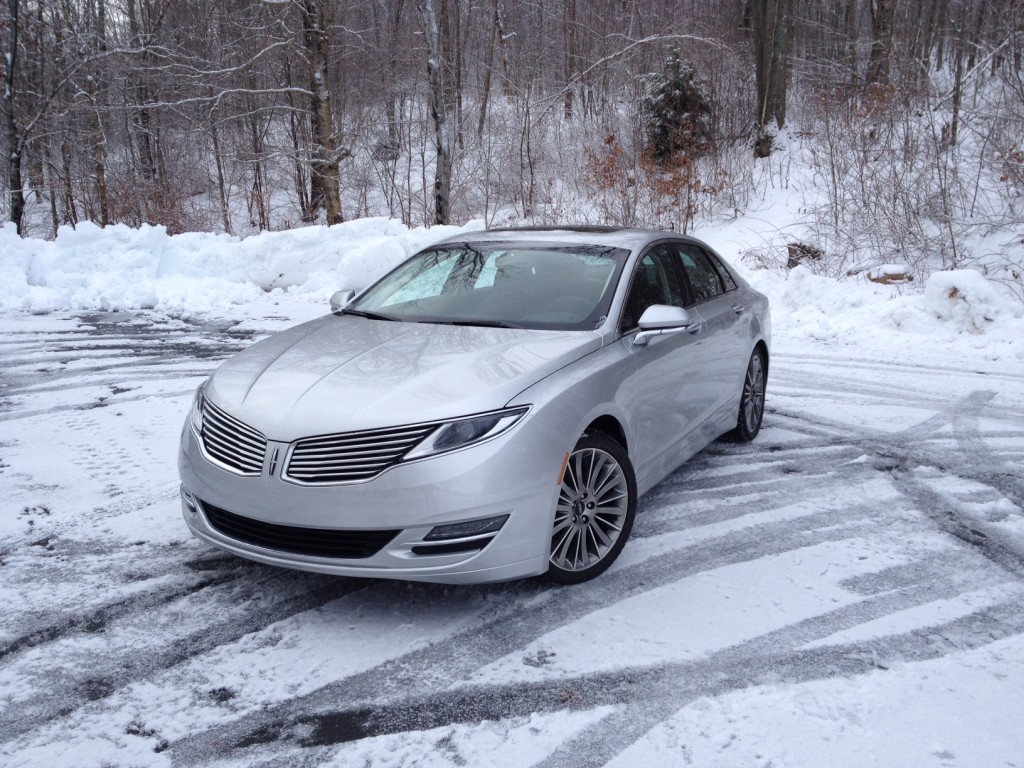 But rather than give up, Ford is trying to completely revamp the brand with eye-catching designs, technology and standard features. One of the first to receive a major revamp is the entry level MKZ.

I spent a few weeks with one to find out if Ford now has finally come up with a credible contender. 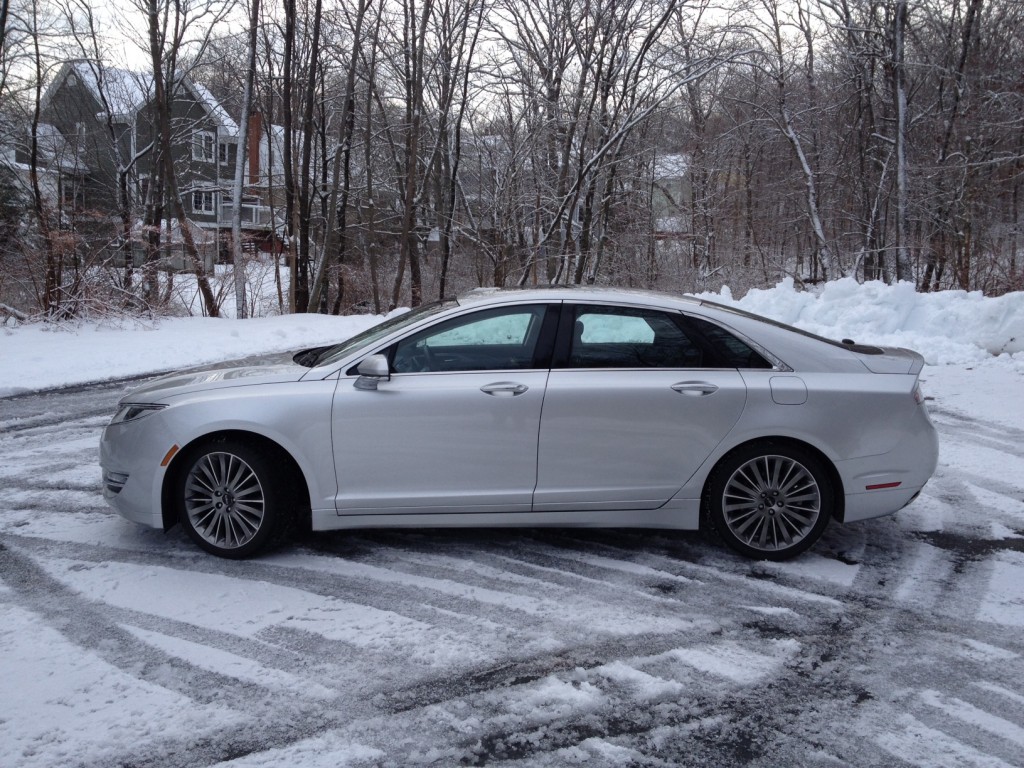 Ford definitely came up with a love it or hate it design when the new MKZ first showed its face. When I saw the premiere at the Canadian International Auto Show in Toronto last year, I was in the minority of being in favour of its looks. Talking to other journalists, they thought the look was trying too hard and that it wouldn’t age well. But I think the massive waterfall –like grille (which is pretty tame when you compare it to the grille of the MKT), the almost tucked away LED daytime running lights, the swooping side profile with the taut chunky rear end is generally pleasing to the eyes, especially when matched with my tester’s beautiful 19 inch wheels which I think really complete the look of this car. I will admit that certain angles from the back make it look a tad awkward but in general there’s no mistaking this for a Ford. Any Ford. So well done to the designers for accomplishing one part of the problem. 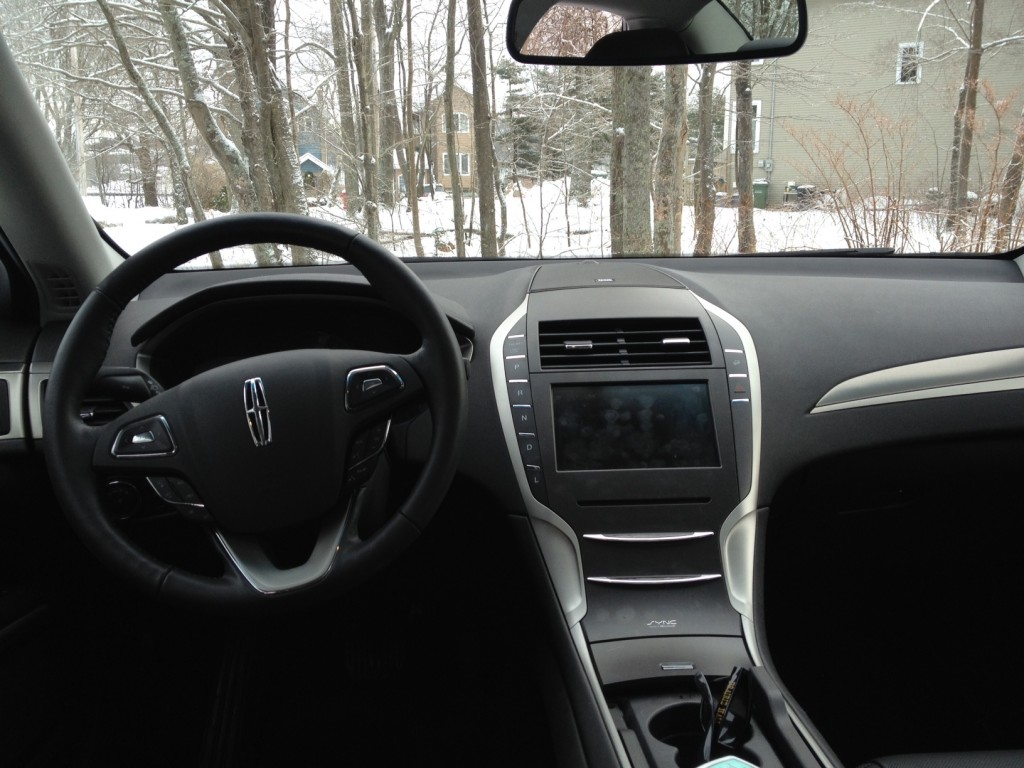 Inside may seem a bit more familiar if you’ve even been in a modern Ford. The centre stack uses the same non-button technology combined with functions in the touchscreen. MyLincoln Touch is officially the name for this system but it looks and acts exactly like Ford’s MyFord Touch system. Which isn’t necessarily a good thing. I appreciate that Ford tries to maximize space and information by dividing the screen into four sections, but it’s honestly just too complicated, especially when driving. It also makes the screen seem very busy which can be overwhelming. On top of that, the system doesn’t react quickly enough or sometimes at all when you push a button on the touchscreen. The same goes for the non-buttons on the dash. This gets old very quickly and it starts to remind you why we still use conventional buttons today in most applications. One thing I did like, which consequently my girlfriend did not, was the control for the volume. You put your finger on the dash and slide it with your fingers. Admittedly this isn’t the most logistical way of dealing with the volume control, but I still liked it nevertheless. 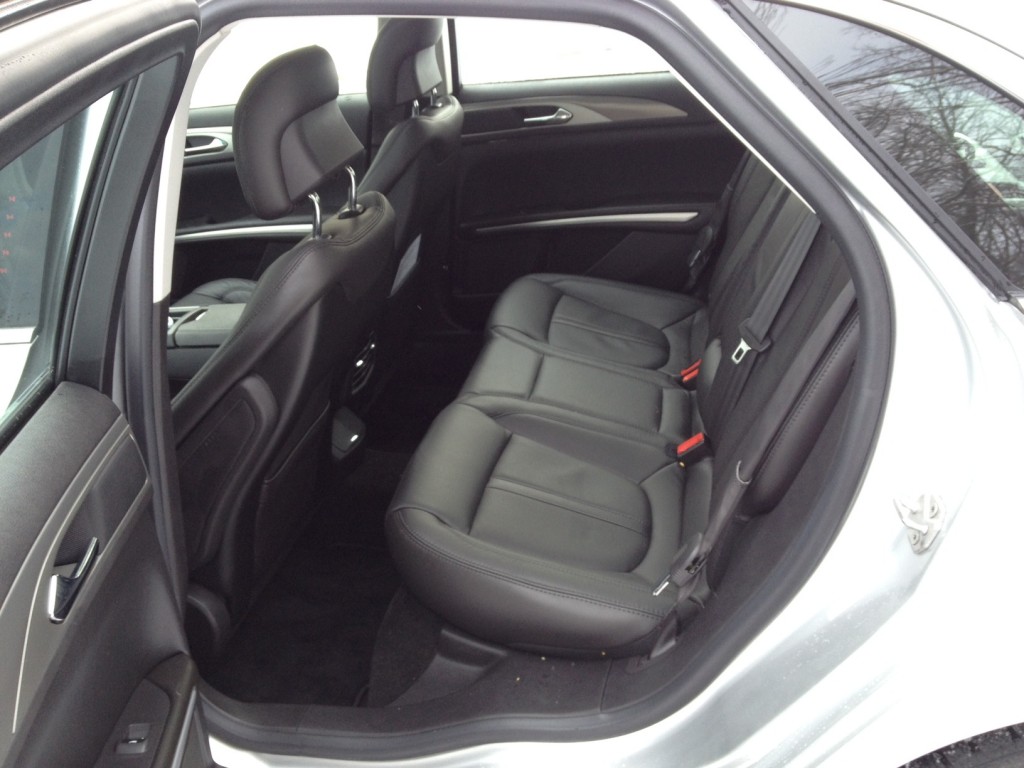 And yes, you won’t be able to read any review on the new MKZ without mention of the absence of a gear shift. Instead, all the controls for the transmission are housed on the centre stack right next to the touchscreen. Why do this? Well it certainly cleans up the look and allows for more room in between the seats for cup holders and storage space (of which the MKZ does quite well with), but is it strictly necessary? Probably not. However I’m guessing Ford went this route because it helps to further differentiate Lincolns from Fords – on top of that very few automakers are taking this approach and the few who are the likes of Jags and Land Rovers – way out of the reach of most buyers, whereas the Lincoln could be bought by Joe Blow fresh off of getting his promotion. It takes a bit of getting used to but once you’ve got it, you completely forget that it is unconventional. 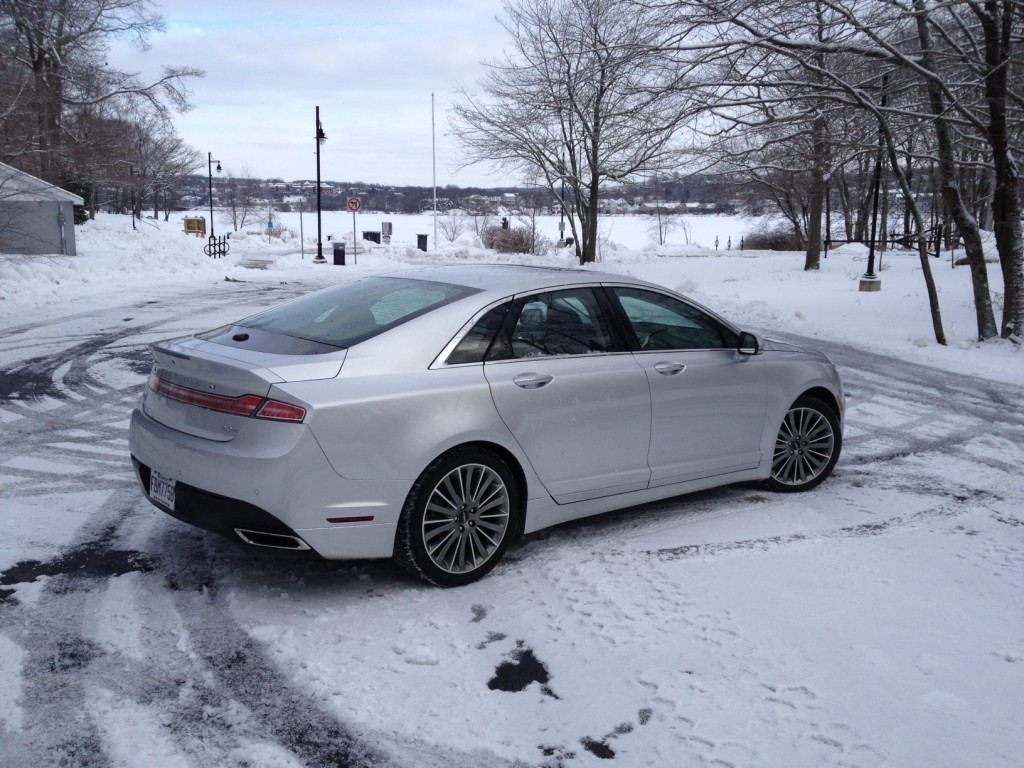 Headroom and legroom is good, being a Lincoln and despite the swoopy design, although you’ll find a bit of a smaller trunk than you’d expect because my tester was a hybrid. In non-hybrid models, I fully expect the trunk to be proper Lincoln large. Still, even with the battery pack taking up space in the hybrid trim level, there’s still adequate room and the rear seats do indeed still fold with a small opening available for lumber or skis. 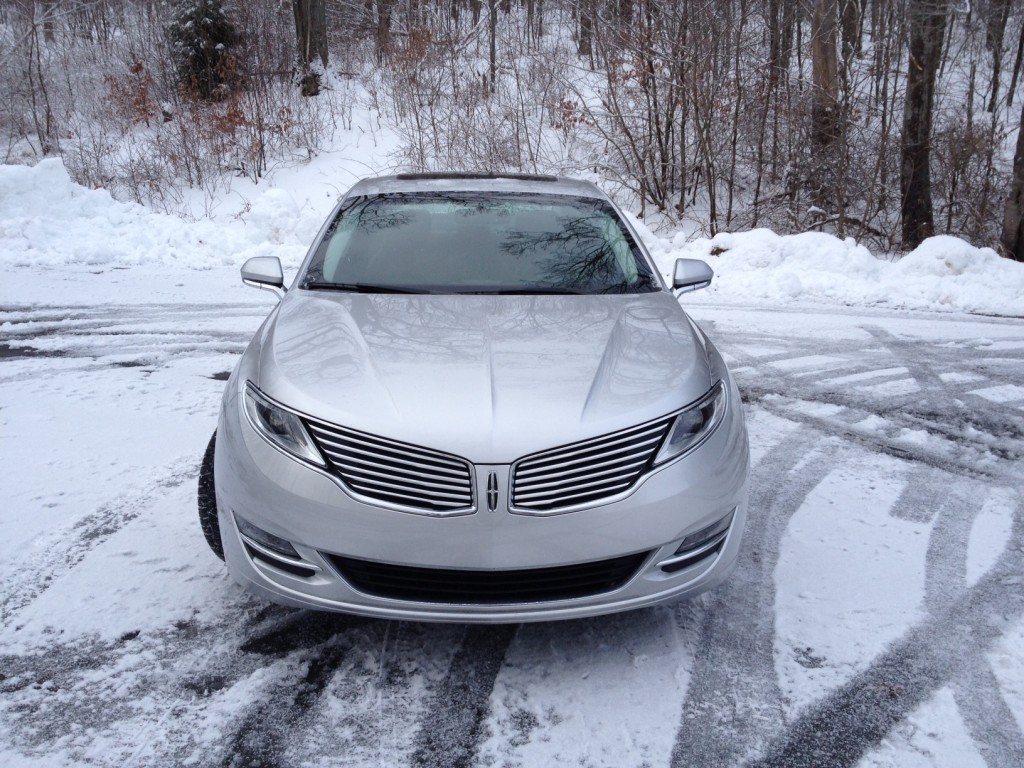 Perhaps one of the Lincolns best party pieces inside is the front seats. They get heated, cooled and massage seats. And while it’s a weird sensation at first, the massaging seats did make for very happy passengers. My girlfriend questioned if the driver should get massaging capable seats while the car was in motion, but I was very glad to have it. 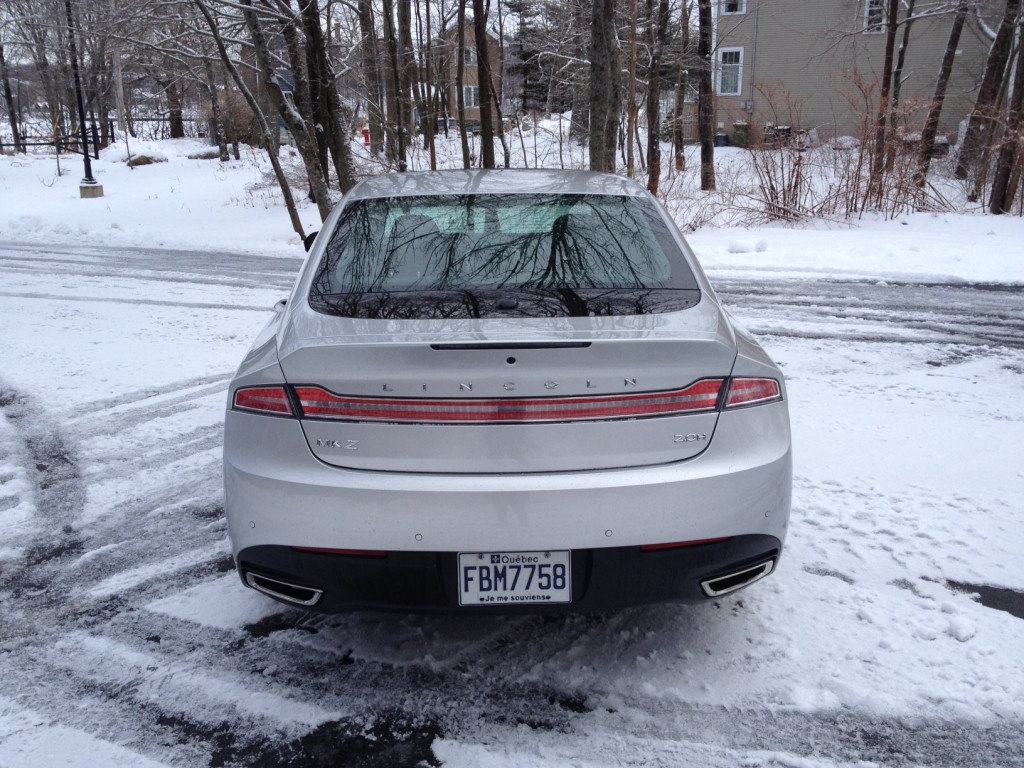 As mentioned, my tester was a hybrid and it came with Ford’s new 2.0-litre Atkinson cycle four-cylinder hybrid drivetrain with lithium-ion batteries. The end result is 188 horsepower and 129 pound foot torque. Don’t let those numbers fool you though, the MKZ hybrid is plenty capable when it’s time to get up and go. The quiet cabin meant you couldn’t really hear the droan of the CVT, and there was plenty of power in case you needed to pass on the highway. 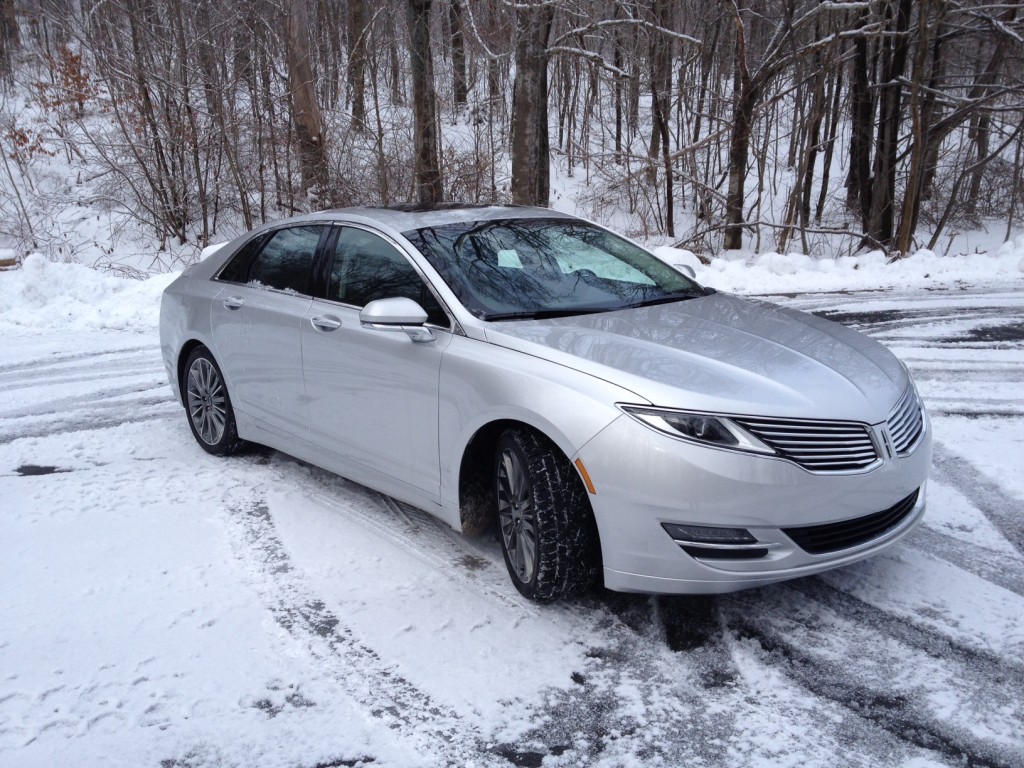 Speaking of, a road trip to Pictou proved that the MKZ is not only decently efficient but also a decent highway cruiser. It’s comfortable, quiet and well mannered – as a Lincoln should be. When you’re off the highway and approaching a corner, don’t expect superstar results. There is some body roll but the large wheels with low-profile Pirellis did keep the MKZ from getting too out of shape. That said, steering feedback to the driver is pretty much nil, as you’d expect. This car is meant for a comfortable ride from point A to point B. If you want decent cornering, look elsewhere. 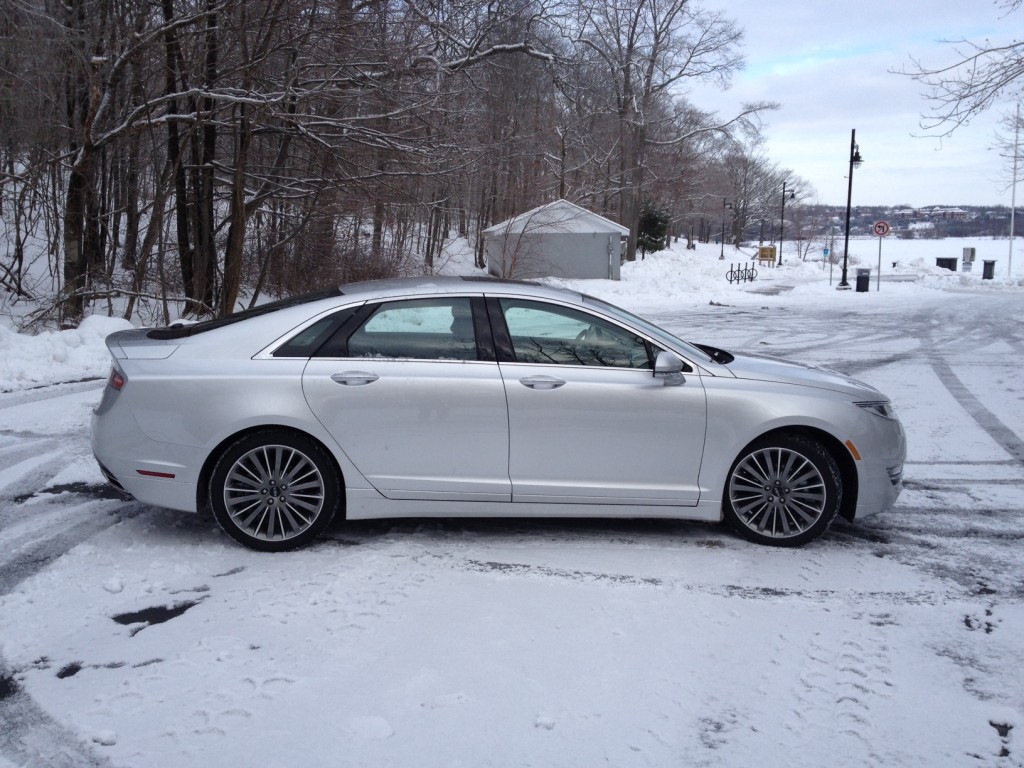 In terms of efficiency, the MKZ hybrid is officially rated at 4.2L/100 kms highway and 4.3 L/100 kms city. Let’s be honest, for a vehicle of this mass, those numbers are damn good. Close to Prius numbers, in fact. But in the real world I ended up returning 7.6 L/100 kms in both city and highway driving. That said, it was bitterly cold with lots of snow storms during my time with the MKZ hybrid, and let’s not lose sight of the fact that a Ford Focus achieves similar numbers. 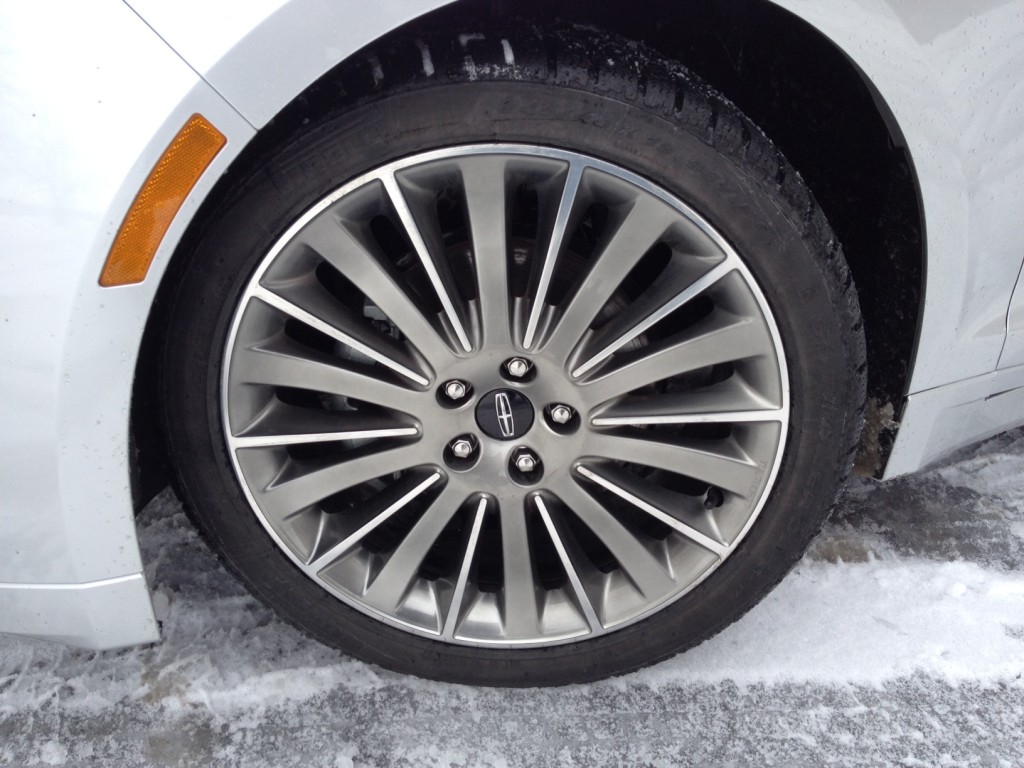 But that does indeed go back to the original question. Is it worth the premium over a Ford, especially since modern say Ford’s are among the best of the best now for quality, driving experience, technology and value? More to the point, is the MKZ worth the premium over say, the Fusion Hybrid, which I recently tested. We’re talking a 20 grand difference between the two. The answer is no, probably not. However, looked at a different way and the MKZ hybrid’s value suddenly becomes abundantly clear. It actually is around the same price of the conventional gas engine 2.0T MKZ. And when you compare that way, you will definitely get your money back quite quickly in gas savings. I know, I know, the 2.0T and the 3.6 will be a hell of a lot quicker, but let’s not forget the MKZ’s main purpose here: to be a luxury cruiser. Lots of power is great, but it certainly does not define a car in this class. 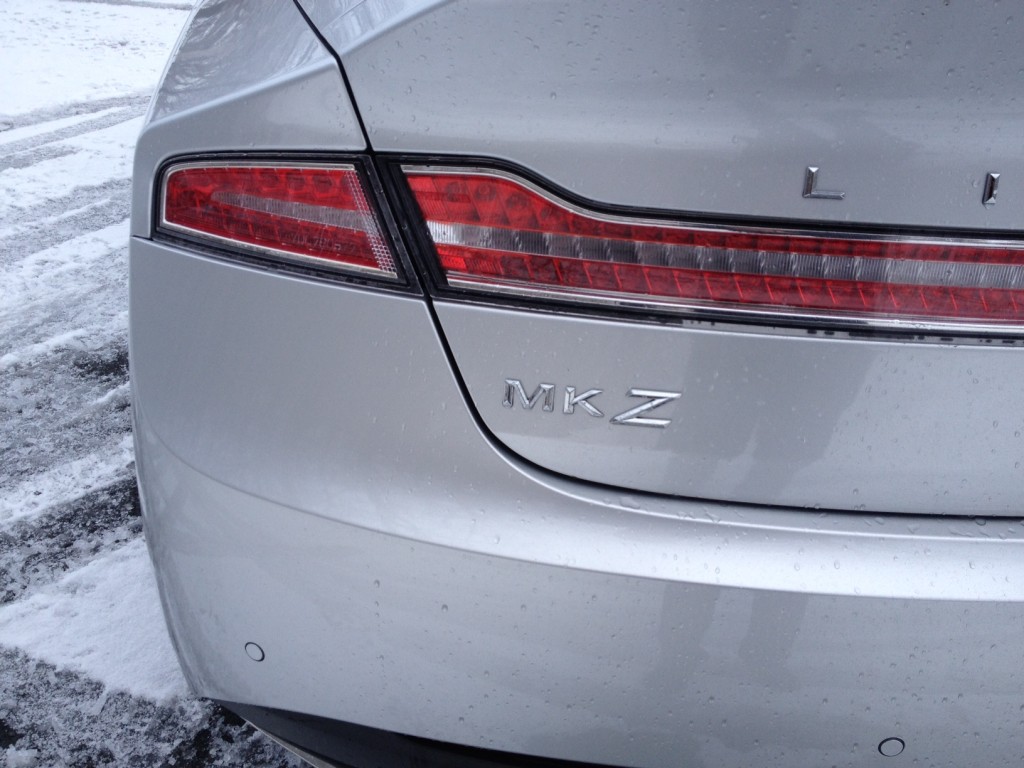 But going even further back to my main point, has Ford actually come up with a credible contender against the likes of GM and Chrysler? Absolutely. In fact, with the revised MKS and the upcoming MKC, I’d say Lincoln is well on its way to a decent future.