Some people thought I was crazy to actually want to drive in Toronto – downtown Toronto included – for this year’s auto show. Then they thought I had absolutely lost my marbles when I told them what I’d be driving: a Jeep Wrangler Unlimited, one of the largest vehicles Jeep makes.

“You’re going to hit everything,” one person told me.

“You’re going to regret it when it takes you an hour to find a parking spot only to find it won’t fit,” said another.

“Why didn’t you get a Prius? All that stop and go traffic is going to kill your wallets,” said someone else regarding its fuel consumption.

I had my pick of several different press vehicles from several different manufacturers including a safe and sensible Volvo, a smooth luxurious sports sedan from Acura, a smart and efficient hatchback from Nissan and pretty much any Kia I wanted. Yet I still chose the Jeep for a few reasons:

Secondly, while I admit the Wrangler in its Unlimited variant is big, let’s not forget that Toronto is home to many bigger large vehicles such as Escalades, Hummers and limos. They do just fine.

Thirdly, given my previous experience, the Wrangler should be an ideal vehicle to soak up all the numerous and massive potholes throughout the city.

On top of all that, the Wrangler was, crucially, equipped with nav. To top it all off, Car Driven’s new Associate Editor, Mary Beth Thompson – who joined me for the auto show – is a quite partial to Wranglers.

So off we went in a vehicle meant to tackle the great outdoors and dared it to tackle one of the biggest urban environments in Canada. How did it fare? 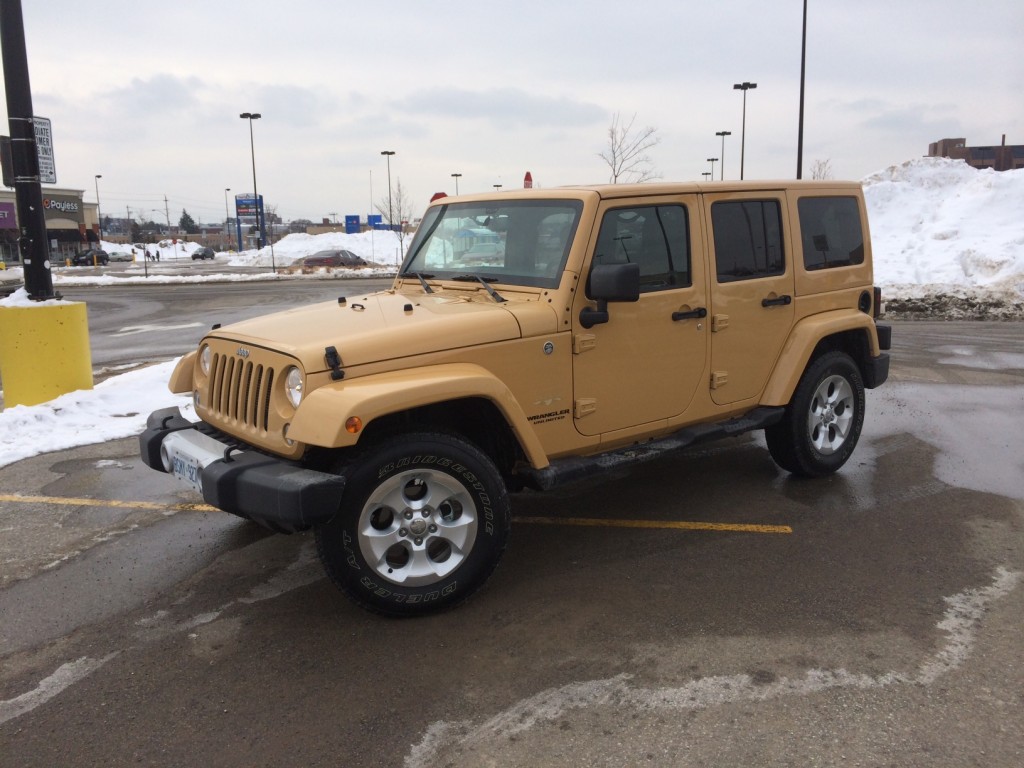 Firstly, while Jeep enthusiasts may still be unimpressed that Jeep added two extra doors to their beloved Wrangler, the elongated look works quite well. In fact, since the Unlimited has been around, I’d wager to say it looks better than the two door. Regardless, this is a vehicle that completely defines Jeep as a brand and it does it well with its traditional round headlights, its seven slotted grille and massive fenders over the wheels. The look is completed with almost 90 degree angles from the hood backwards, along with a rear mounted spare tire and tail lights which have not changed since the Wrangler was known as the TJ. Like it or love it, you cannot mistake it for anything else on the road and that’s pretty much the wet dream of any automaker. My tester was the Sahara trim level – just one trim level down from the massively robust and rugged Rubicon trim – something that may have been overkill for city slinging. Aside from Sahara badges, visually, the Sahara trim also adds unique wheels. 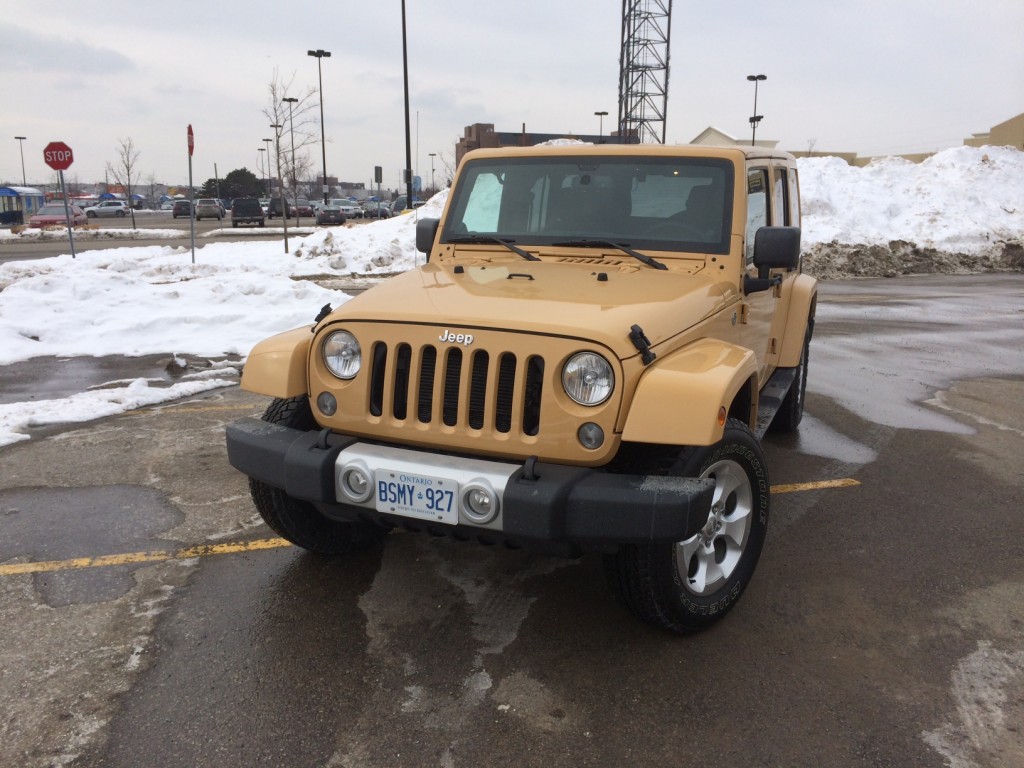 My tester also had the soft top option ticked off which meant it essentially can be turned into a convertible if need be. That’s why even the door hinges are made of cloth instead of metal. Obviously in February I did not try to drive around with our a roof and doors, however I do get the appeal. The only thing that sort of is a pain would be a) handling all the heavy panels and b) not having anywhere to put them. Which means you’d have to plan ahead of your trip to take them off and store them in your garage.  That also means you’ll have to check the long-term forecast to make sure you don’t get stuck in a downpour but since long-term forecasts are about as accurate as a drunk brain surgeon, this would likely cause some issues down the road, though the soft top would do the trick short term. But who cares! You”ll be in a cool looking Jeep with the wind in your hair. And isn’t that all that matters? On top of that, the removable parts posed no problems with outside cold air trickling in, although they did cause some rattling over harsher roads. 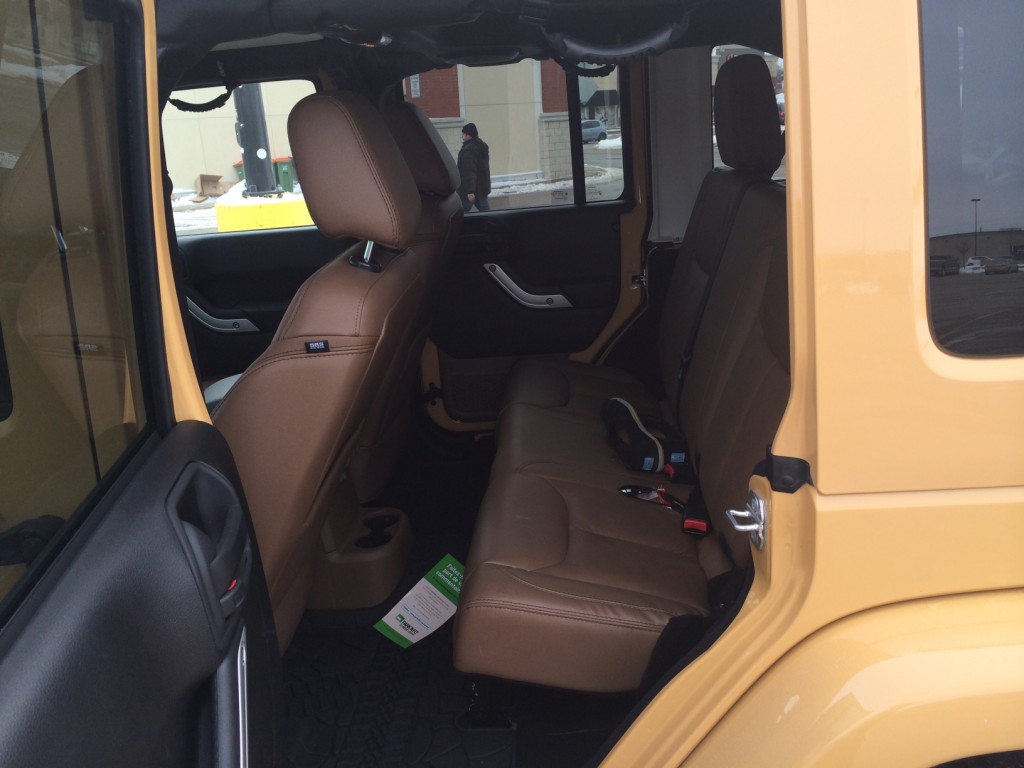 Inside, Jeep has added a bit more of the luxury touches typically found in its other models like the Grand Cherokee. For instance it now has a newly designed leather wrapped steering wheel. My Sahara model tester came with leather seats with Sahara stitching which were decently comfortable. You will also get a great multimedia center which is quite easy to use. The nav, while not the quickest to set up, does a pretty good job of getting you where you need to be. My only gripe is that it didn’t tell you which side of the road your destination was on until it was too late i.e if it was on the left and you were in the far right lane, you didn’t have enough time to move over to the left lane and you’d end up driving past it. The other feature I expected it to have was a back up camera. This would be a welcomed feature given the rear mounted tire and headrests get in the way of rear visibility, however I must admit, I got used to backing up the Wrangler the old fashioned way pretty easily. 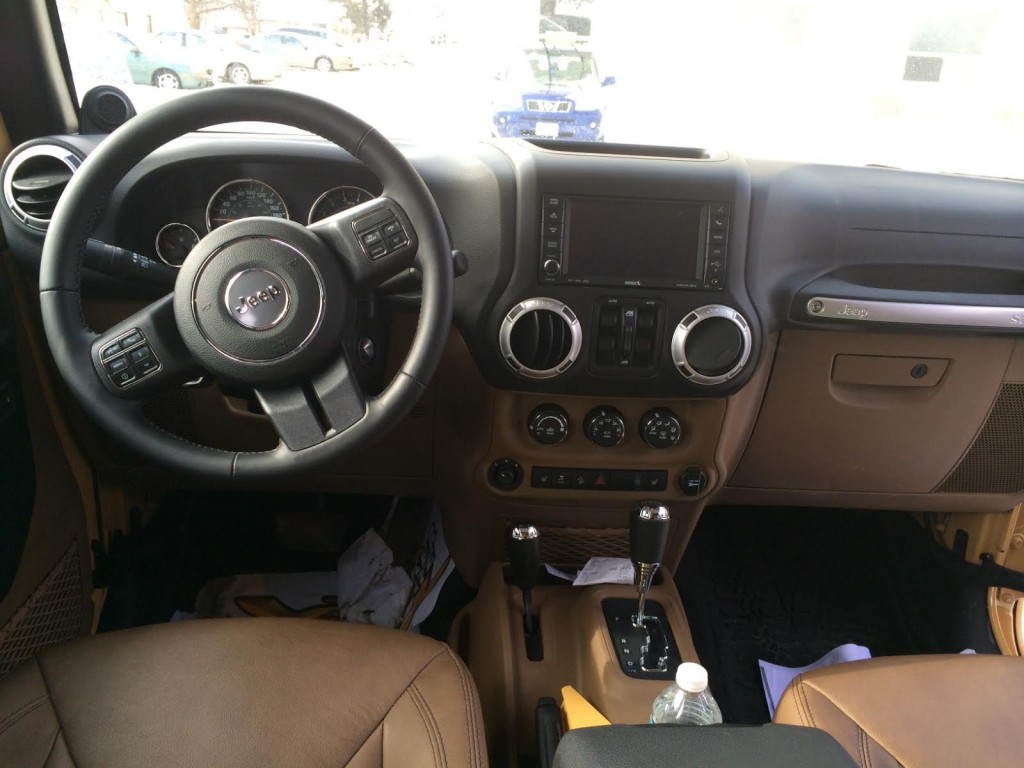 Cargo room is decent, although it’s not as big as you’d expect. The sub woofer takes up a good chunk of space as does the soft top cover, but we were still able to fit our two duffel bags in. Rear seat legroom is good while head room can’t be beat. Egress from the rear row is a bit difficult as the rear doors aren’t wide by any means and the rear fender is so big that is actually gets in the way slightly. 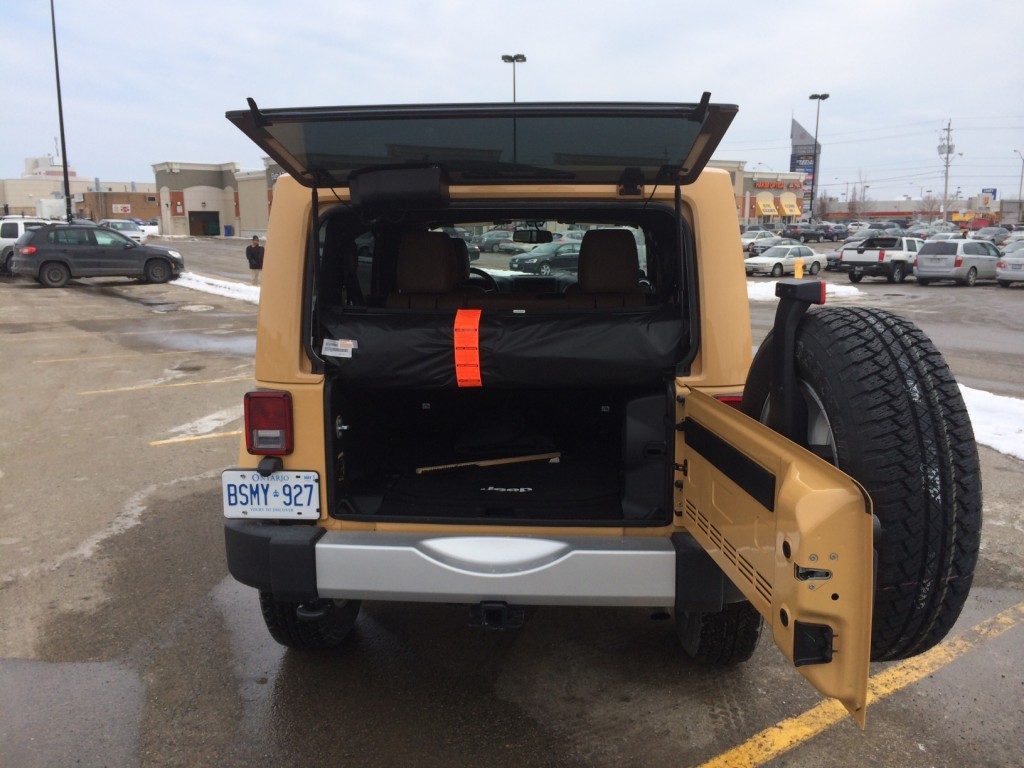 Power comes from a 3.6 litre V6 24 valve VVT engine which makes 285 horses and 260 pound feet of torque. This is an award winning Pentastar engine, and it’s not hard to see why. It’s perfectly smooth and capable. Surprisingly the optional 5-speed automatic is too. I was expecting a rough transmission with clunky changes but it was anything but. Even as I type this I’m still flabbergasted as to how smooth the transmission is. I was ready to completely criticize Chrysler for only using a five-speed, but the truth is I can’t – aside from potential  fuel consumption gains by using more gears which I’ll get to in a minute. But this transmission/engine combo is decidedly good. That said, it wouldn’t surprise me in the slightest if Chrysler updated this transmission to a six-speed or quite possibly even putting in their new nine-speed, however as it stands right now, it does decently with the five-speed. Thankfully, a six-speed manual is still available and is the way I’d go. 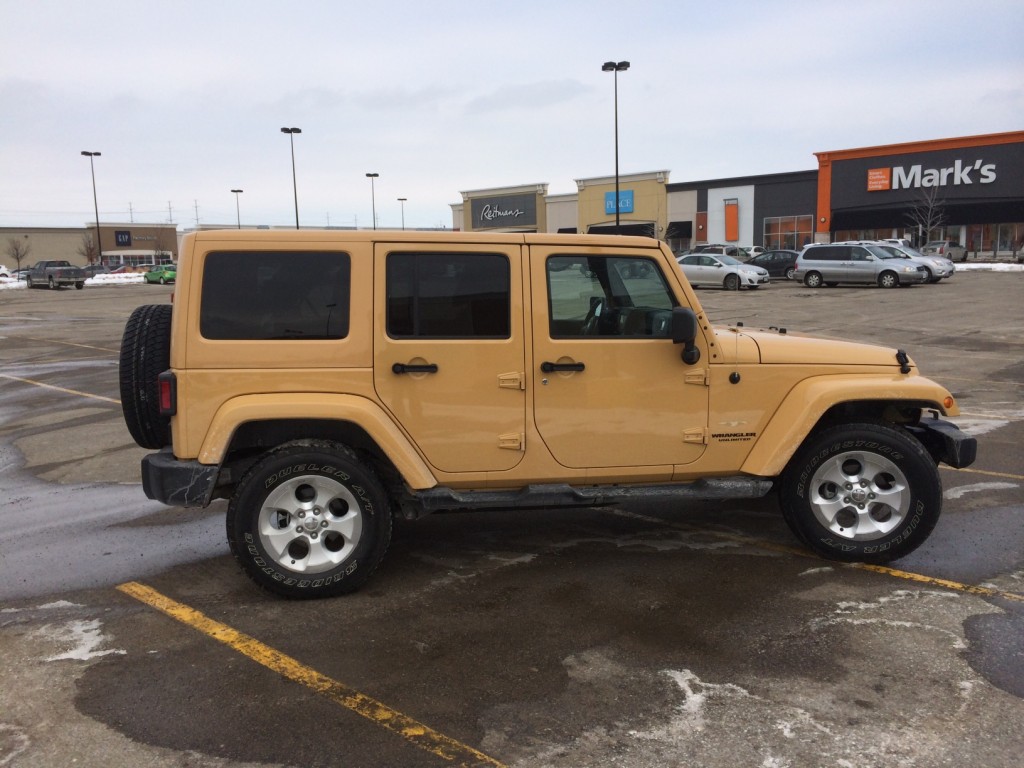 So, did I get completely slaughtered in fuel efficiency? Well actually no, not relatively. Officially the Wrangler is rated at 13.2 L/100 kms city and 10.0 L/ 100 kms highway. I averaged 15.7 L/100 kms in mixed driving around Toronto (sitting in traffic included) and while that’s no Prius, I still came away impressed with those numbers considering I got close to that from the Buick Regal I had a while back. On top of that, these were cold temperatures so I’d wager you could possibly return a bit better fuel consumption in warmer weather. Now, could I deal with 15.7 L/100 kms every week? Probably not. But then again, like any vehicles there are going to be certain compromises. A Ferrari 458 Italia isn’t going to take you camping after all. 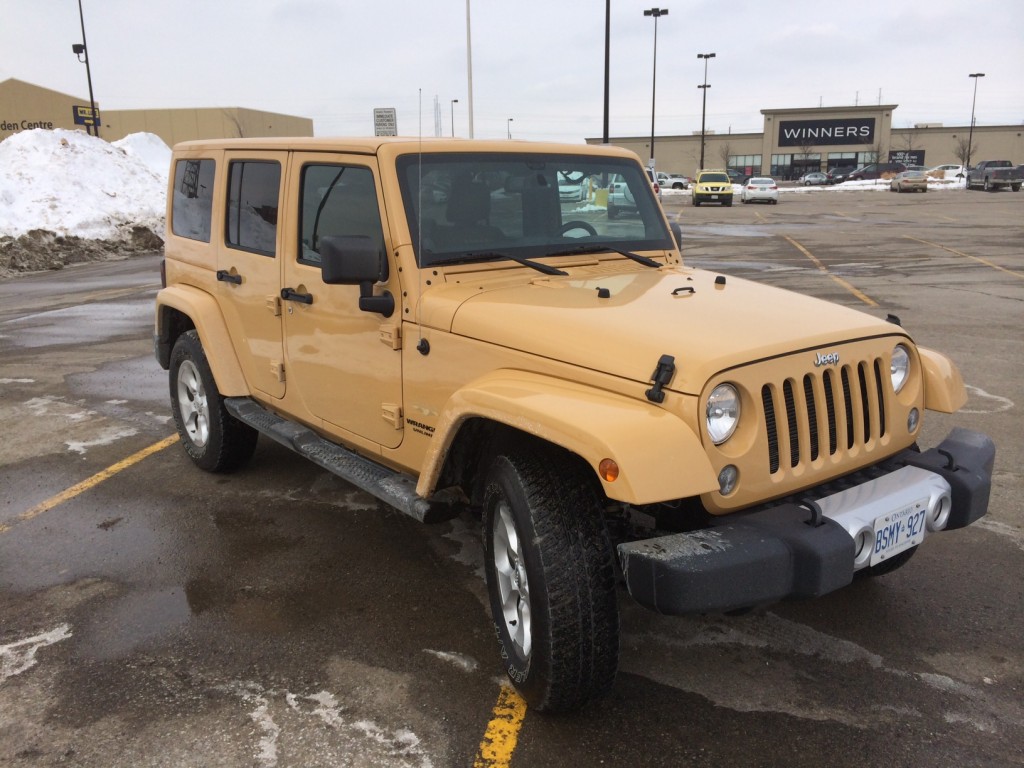 Speaking of, while I didn’t get the chance to take it off road, I have absolute confidence in this truck’s abilities. That said, I can say with certainty that it does just as well in an urban environment. While I wouldn’t call the ride luxurious, the Wrangler will soak up bumps and potholes with ease – to the point where you don’t even have to slow down for speed bumps (I know that defeats the purpose) or even big potholes. 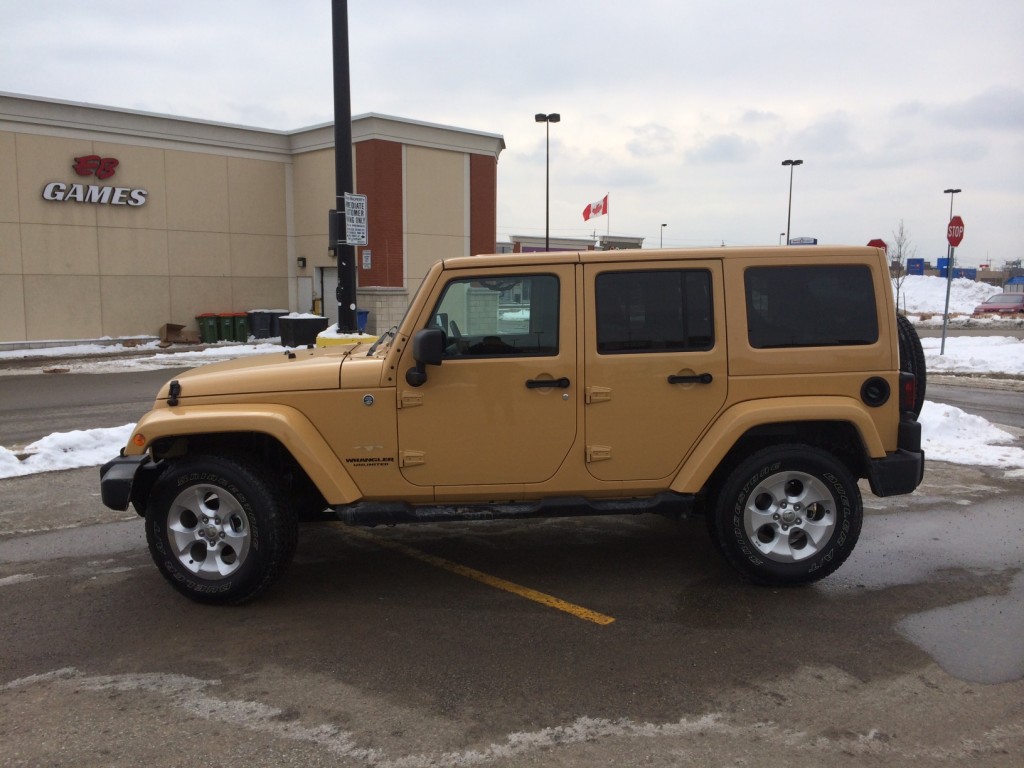 On the highway, road noise isn’t as intrusive as you’d think however it’s the Wranglers shape which produces lots of wind noise. Also, cornering in the Wrangler is exactly what you’d expect – body role galore along with numb-ish steering. So in that sense it wasn’t really an all-star to zip through traffic, but at no point did I not feel confident in maneuvering it as long as you keep in mind that you’re not driving a sports sedan. Braking was good considering the weight and size of the Wrangler. Driving in Toronto there were a few panic stops made as cars and pedestrians without the right of way pulled out in front of us, but the Wrangler, surprisingly, did well in these situations. 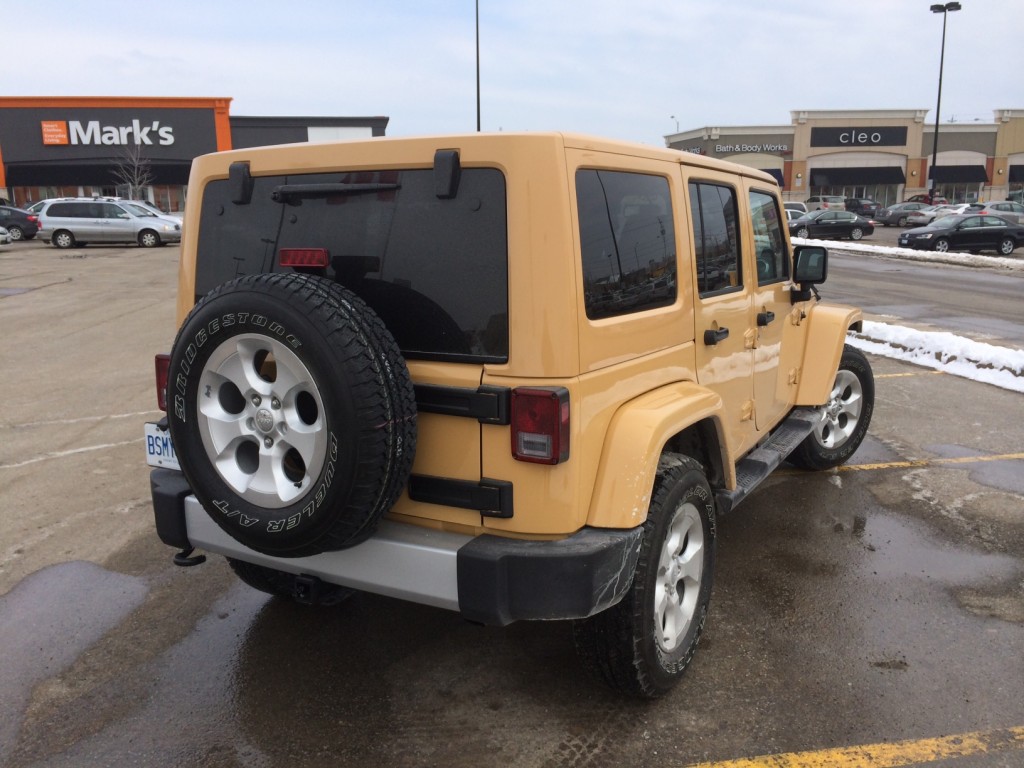 Indeed, the Wrangler  did quite well overall in the streets of Toronto. At no point did I feel limited by its size, ruggedness or fuel consumption and to be honest, at times, I kind of forgot I was driving a Jeep. This may or may not be a good thing depending on your loyalties to the Jeep brand, but I definitely walked away impressed with its versatility, comfort and engine/transmission combo. Is the the right vehicle for driving around in Toronto? Well there are obviously better choices, but one thing is for sure, you can’t strike it from your list of vehicles not to drive in Toronto. So it’s good enough for the city streets, it’s even better off-road, and it has awesome looks to boot. Those who know me know I don’t like SUV’s, but after my experience I might, just might consider a Wrangler for when I need more space. In the meantime, I’m going to take my experience to happily prove all the naysayers wrong. Take a Jeep Wrangler around Toronto and you’ll do better than fine. 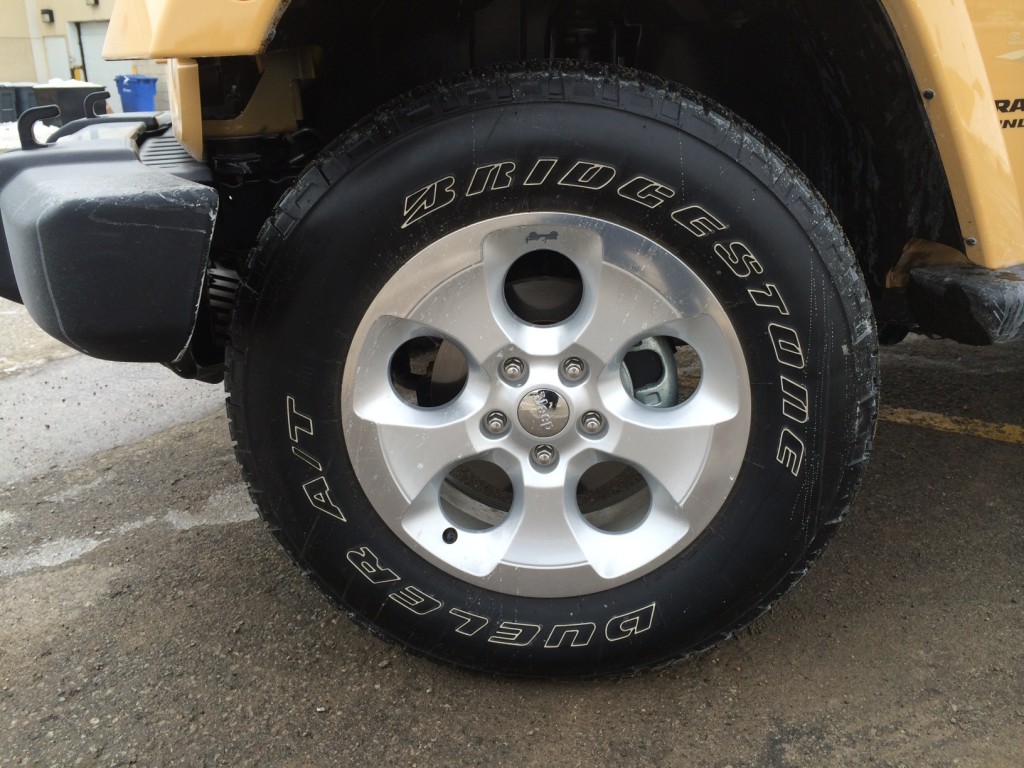