You did it, Hyundai. I was waiting a long time for this day to come.

Everyone knows you’ve improved substantially as an automaker since the days of the Pony (sorry to bring that memory up) but to be honest, I still wasn’t completely taken with a lot of the product you made.

Sure, you are arguably the leader in terms of value for most segments you compete in and you’ve obviously invested a lot of time into your styling department with lots of success but there was still something about you that seemed to put me off.

I could go on about your hollow feeling suspension, poor resale value and awful interior lighting among other things, but you’ve earned my respect with the new Genesis which my girlfriend and I affectionately now call “Jenny”. Those who know me well know that I generally don’t name cars – they already have names given by the manufacturer – but when a car has character and even a personality, it deserves at least a nick-name. In fact, the only car I’ve ever really felt was deserving enough was my own vehicle. However, Hyundai, you’ve found a way to completely impress me.

Here’s how you did it. 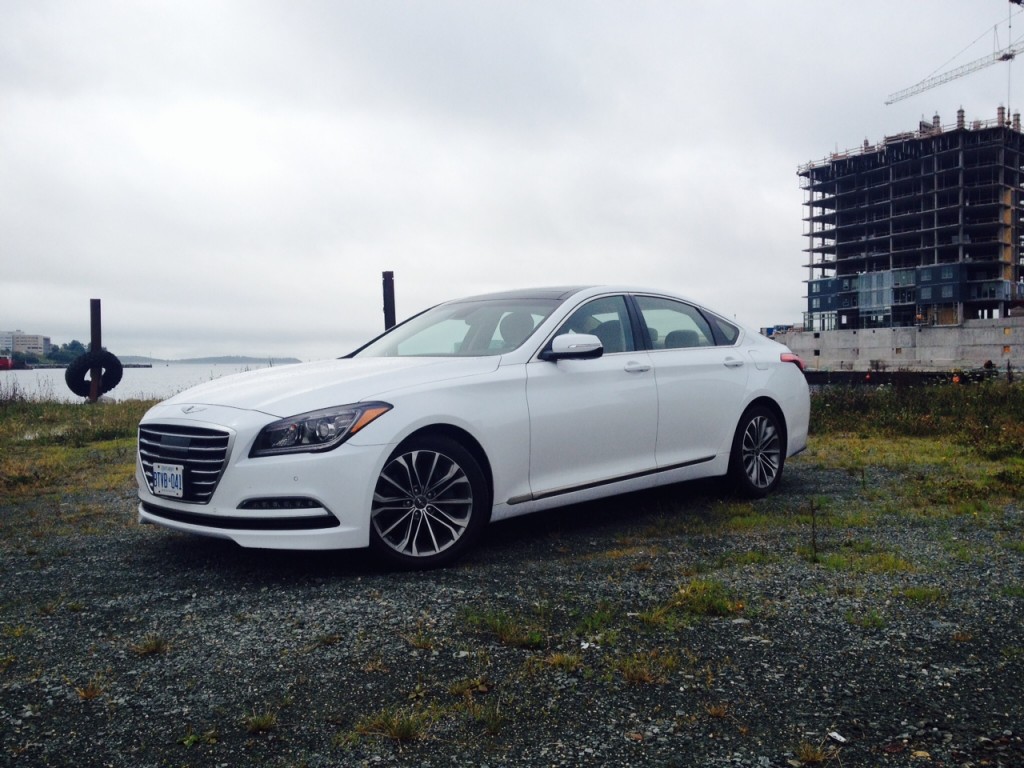 You did it with style. Sure, you were always good at producing swooping lines and curves, but let’s be honest, that sort of styling doesn’t exactly age well. Instead you took more of a classy approach with this new second generation Genesis and you pretty much nailed it. Aside from the rather uninspired wheel design and tail light design, it’s still very much a looker, so much so, that a fellow in a 1970’s Charger came up to me to ask more about it. And it’s not just older generations that are noticing. It’s younger kids like the pack of loitering teenagers in front of a convenience store who mistook Jenny for a Bentley. While I could criticize a few angles as looking a bit too mid-size-sedan-generic, for the most part it looks the part. 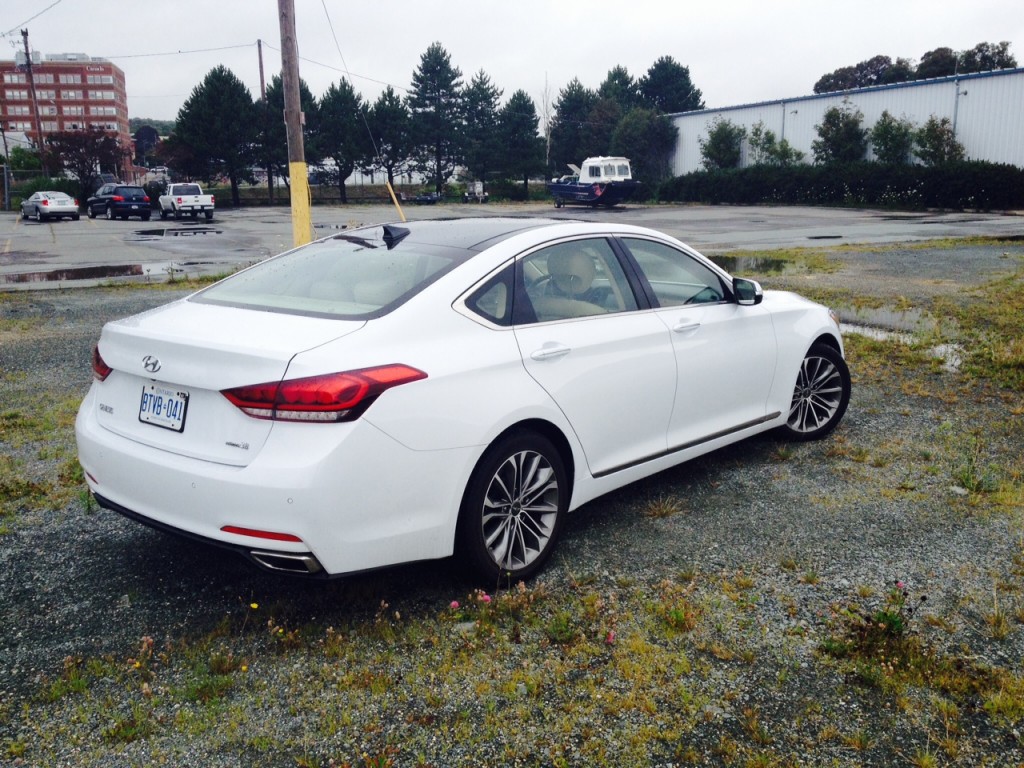 Perhaps even more impressive is the way you did it with the interior, Hyundai. Top notch materials are found pretty much everywhere you look and touch and oh my, is it ever nice to the touch. The layout is simple and classy. At first I was a little off-put by the three colour schemes, but eventually the brown, beige and wood inlay mesh did seem to make sense. The only gripe I had was with the volume knob and the climate control knob. They are the exact same size and are placed one on top of the other. I’m more of an adjust-the-volume-the-old-fashioned-way kind of guy, and sometimes I would turn up the heat instead of turning up the volume. But really, this is my only complaint. Given my tepid response to most Hyundai interiors, that’s no small feat. 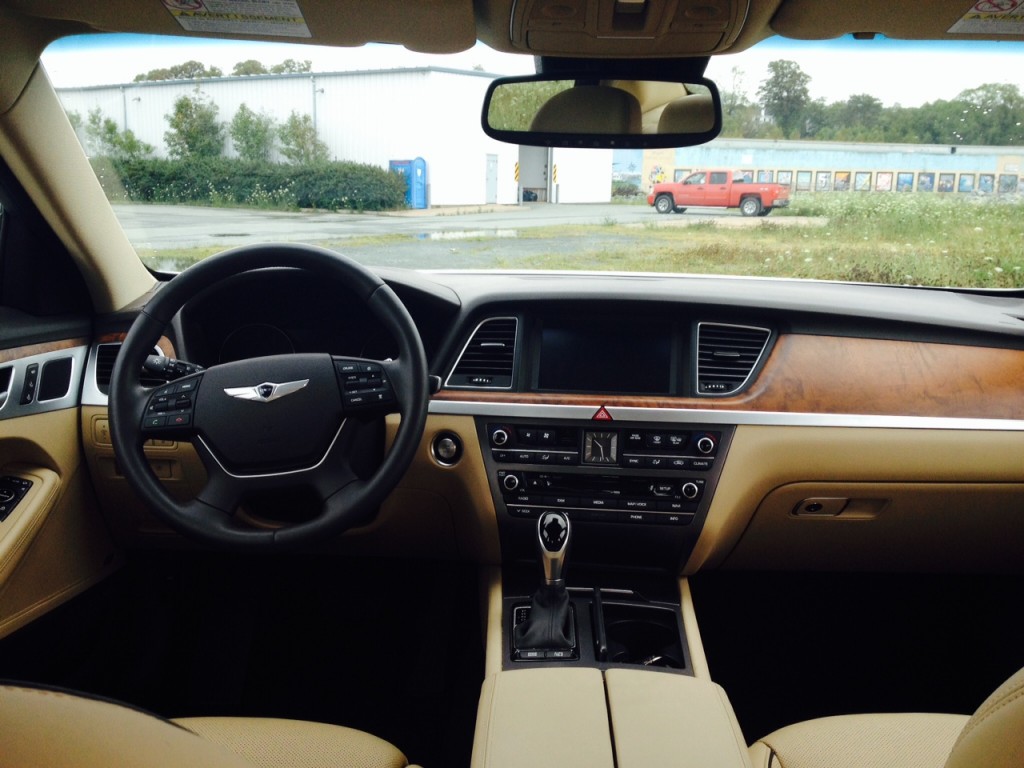 Neither is comfort. It is tremendously easy to get behind the wheel and find your perfect driving position with seats that provide two-mode memory, side bolstering that engages with more aggressive driving and the ever underrated thigh bolster support. Not to mention goodies such as a heated steering wheel, well laid out heads up display and overall loads of luxury throughout. And I don’t throw around the luxury term loosely. 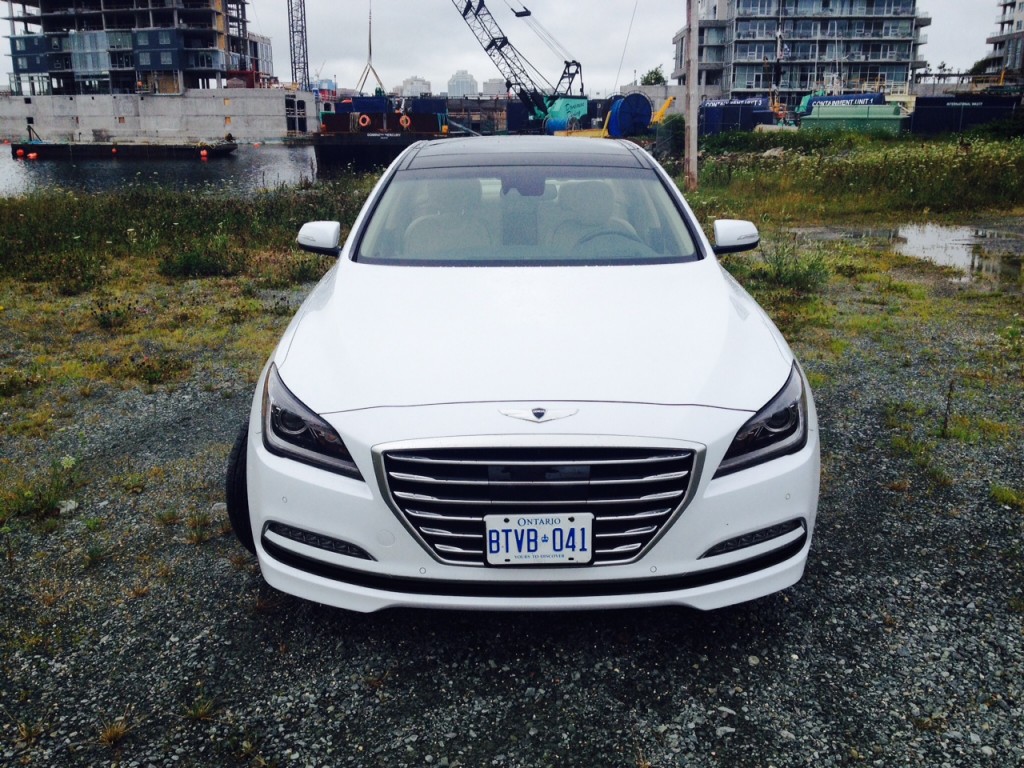 You see, Hyundai. While I respect your tenacity for providing unbeatable value in almost every segment you compete in, I was always a bit turned off by how you went about doing it. Sure, you can say you’ve put leather in an Elantra along with cooled seats, a panoramic roof etc. but I always found it all to be rather budget feeling. What good is having leather if it doesn’t feel like real leather or cooled seats that only have one mode (barely on) and only available to the driver? You always made your cars seem luxurious on paper, but real world experience would always suggest otherwise, Hyundai. 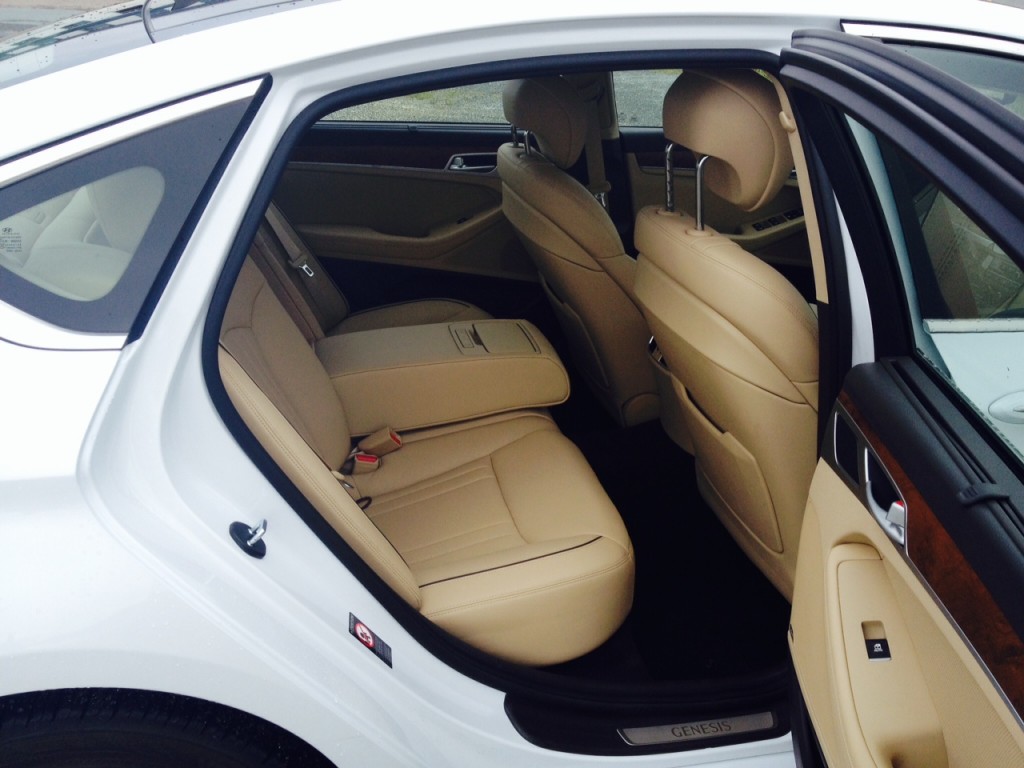 So perhaps sniffing your own demise coming by offering value in cars that never saw it before, you decided to up your luxury game by providing real luxury amenities and a drive that feels upscale. It’s almost as if you’re trying to corner every market in the automotive segment and who could blame you for trying. You’ve changed the game by offering value with faux-luxury feeling cars at the bottom end, and indeed offering ‘real’ luxury in the top end. 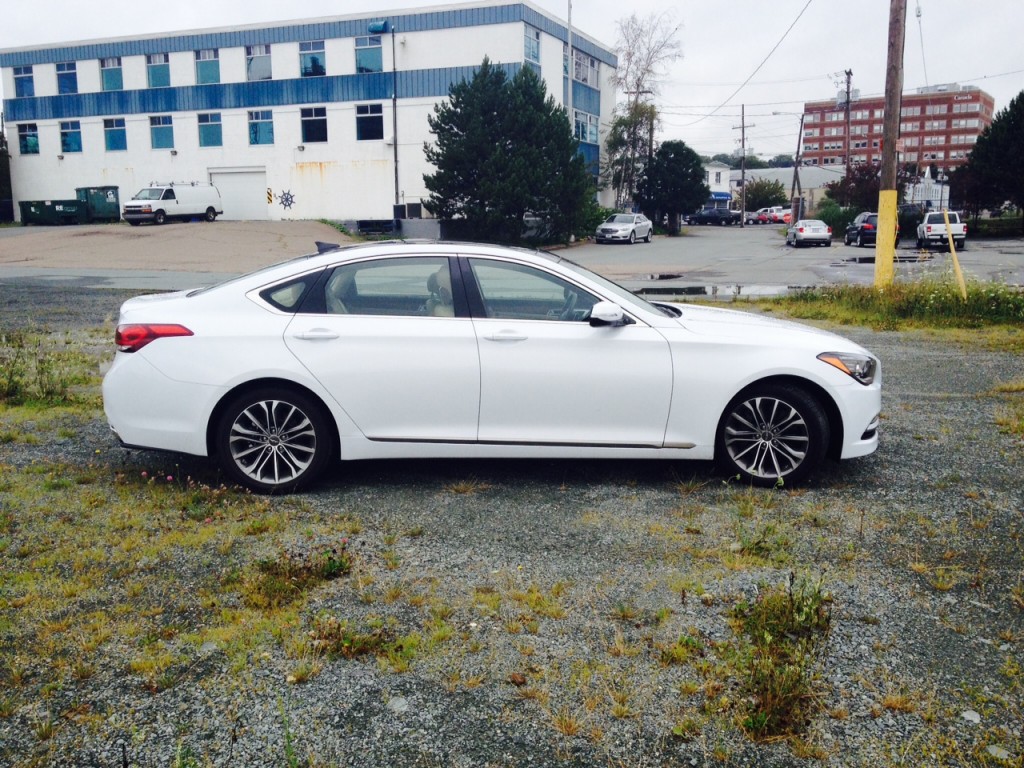 The Genesis sends its fuel to a 3.8 litre V6 which makes 311 horsepower and 293 pound-foot torque. There is a V8 option available, but to be truthful, the V6 does the job just fine and will likely satisfy most buyers in the segment. Keen Genesis aficionados, if such individuals even exist, will notice that power is down from the previous generation V6 Genesis. Having not driven the previous version I can’t attest to whether or not there is a noticeable difference; acceleration doesn’t feel blisteringly fast but you won’t be feening for more power either. Overall this unit is solid and smooth. 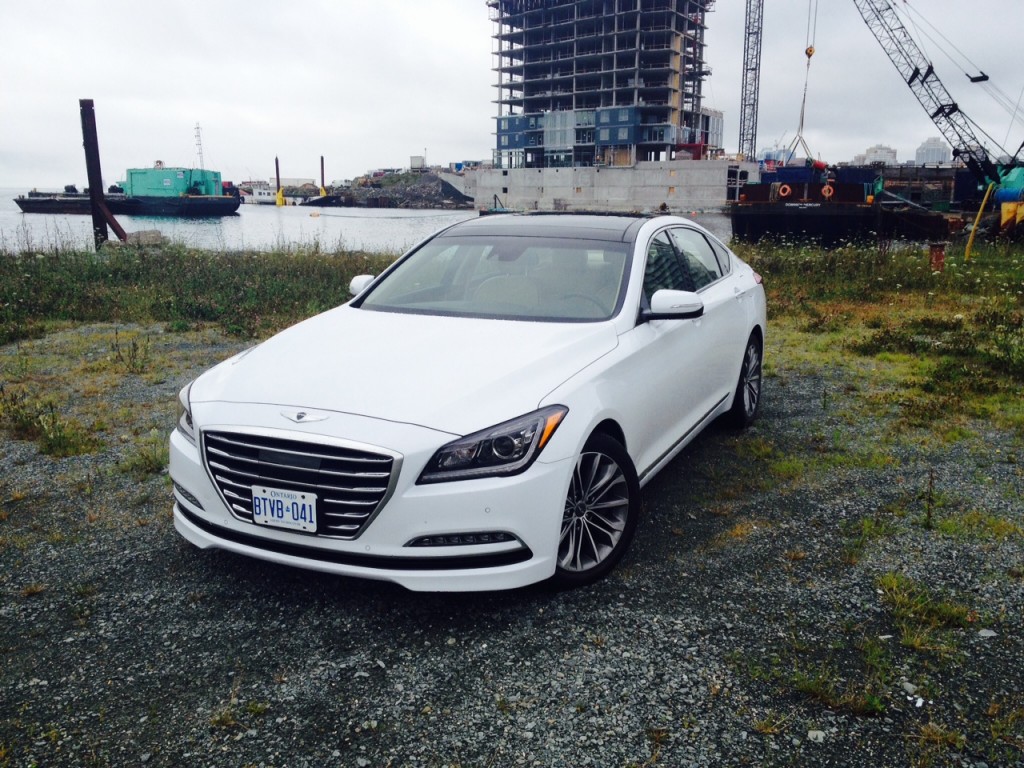 In this segment, auto manufacturers are tasked with the difficult goal of mixing sport into their luxury sedans and, again, you didn’t disappoint much here either Hyundai. Sure, I’d wager an A6 or 5-series would likely clobber Jenny on the track being more obviously performance oriented, but I must say Jenny held her own as well. As long as you are aware of Jenny’s capabilities and try not to push it beyond them, there is a bit of fun to be had in the corners. The downside is Jenny’s overall mass. It’s not only noticeably bigger than the outgoing version but it’s also heavier. 4,295 pounds heavy to be exact. But the optional all-wheel drive system keeps things in check when need be.

That system may have inadvertently played a role in keeping the Genesis planted when I took it out of its element and onto a dirt road in Annapolis Royal, Nova Scotia. It did quite well when pushed and that luxury suspension came in handy for all the bumps. I’m not for a second suggesting that this thing will do the trick for off-roading, but its competence when faced with the task was at the very least pleasantly surprising. 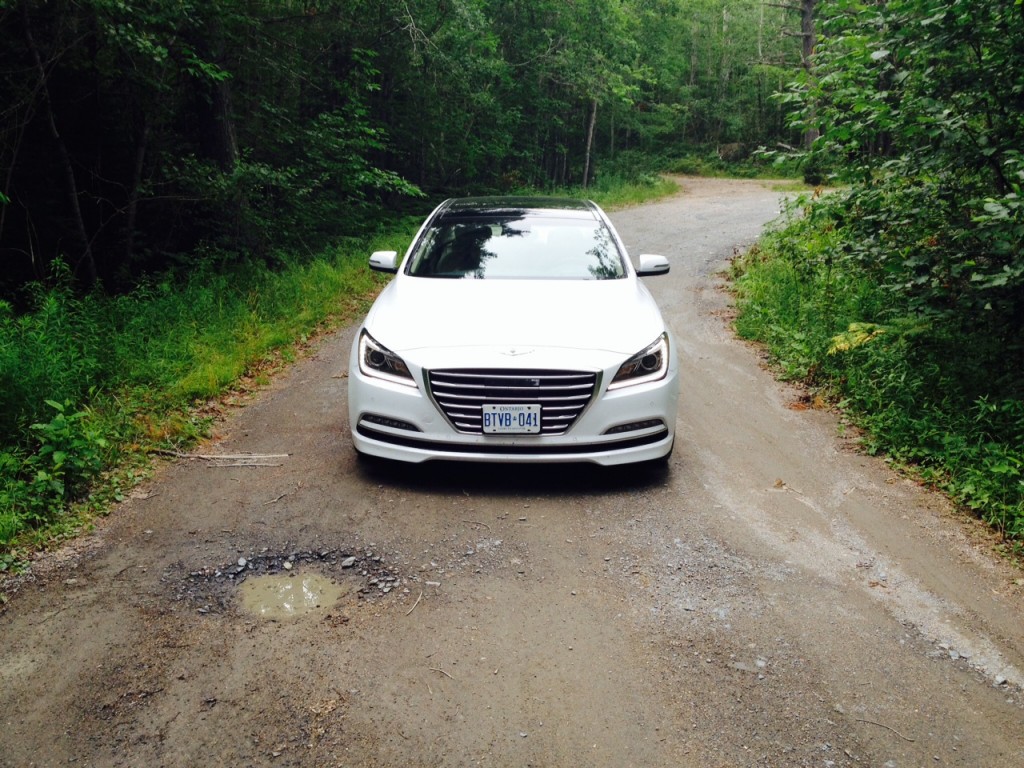 On the highway, Jenny pretty much drives herself and I mean that almost literally. With great cruise control that will both slow you down and speed you up based on the flow of traffic and a system that will keep you in your lane should you veer off. Generally, I don’t like these nannies. To me if you’re going to drive a car you should actually drive it. The car should not drive itself for various obvious reasons, not least of which is not actually having a brain and the very human instinct of self-preservation, but when the system works this good and this flawlessly, I can’t really complain. Jenny, on the other hand, will complain if you take her aiding nature for granted. When trying out the lane departure system to see if it would actually steer you back into its lane, I took my hands off the wheel (don’t try that at home, kids) and let the system do its thing, which it promptly did with ease but not without a warning message after for Jenny urging me to not ever take my hands off the wheel again. I don’t really know how she knew, but she did.

And it’s that kind of innovation that gave Jenny, and subsequently, you, Hyundai, a small piece of my heart. Very small, but a piece never the less. 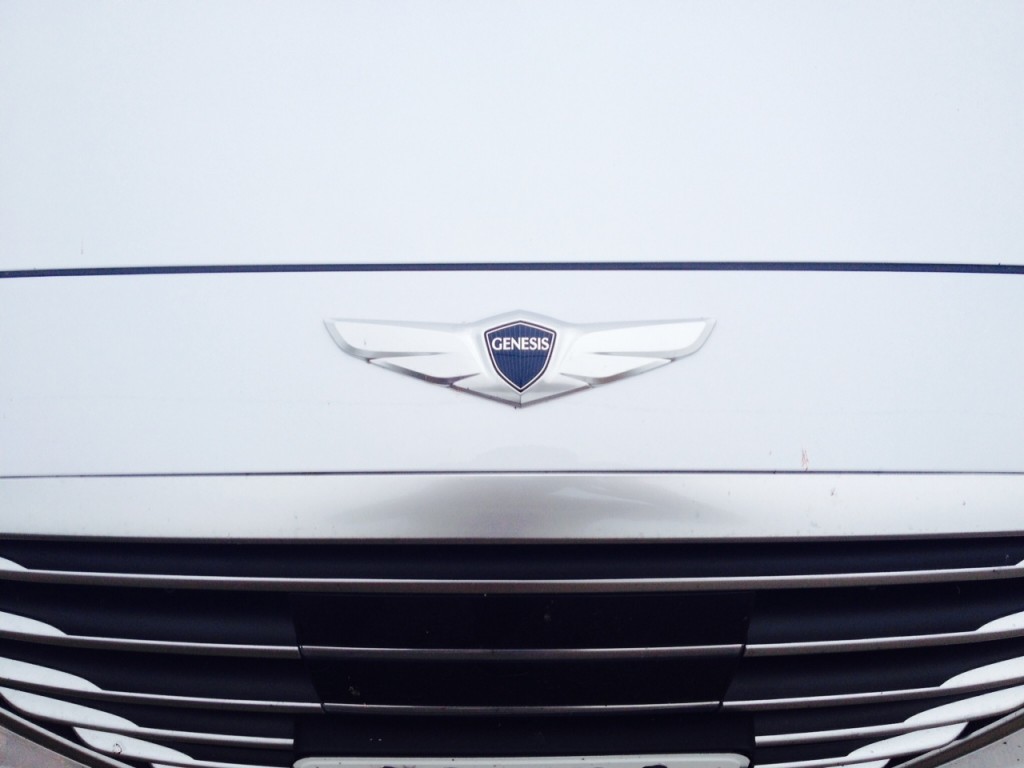 There’s no doubt that you wanted to send a message to zee Germans, Hyundai:

“Anything you can do I can do better…”

….or at least as good for thousands less. While that has always been your mantra, you’ve actually made a product that really walks to the talk.

But more importantly, you’ve proven to me that you do know how to build a good, interesting car without styling gimmicks or cheap ‘firsts’ within a segment. You’ve proven that you have what it takes to keep up with the big boys. And perhaps you may even surpass them one day, Hyundai. Until then, keep making Jenny and other cars in their lineup as good as they can be and maybe one day I’ll have a nickname for every product you offer. Which could possibly be the ultimate compliment coming from a guy like me.