I’m going to admit straight off the bat that I don’t like muscle cars. Sure, I can appreciate the nostalgia surrounding them. And besides who doesn’t like oodles of cheap power? But to me, they are brash, unsophisticated,  fuel chugging, status symbols meant only to fulfill the mid-life crisis of your now grey-haired balding father.

But then I start thinking like a 10 year old. If you look at it from this point of view, they are pretty much the best thing ever. Burnouts, donuts, brake stands, and rumbling engines are just plain cool at that age. And if you are able to take the top of, the coolness levels are pretty much off the charts.

Chevrolet’s Camaro has historically lagged behind Ford’s Mustang for the pony car king, but its recent revival and its starring role as Bumblebee in Transformers have breathed some new life into it.

So, your dad loves it, your 10 nephew loves it, and it makes an awesome transformer. But what is it like for daily use? I took one out for a week to find out. 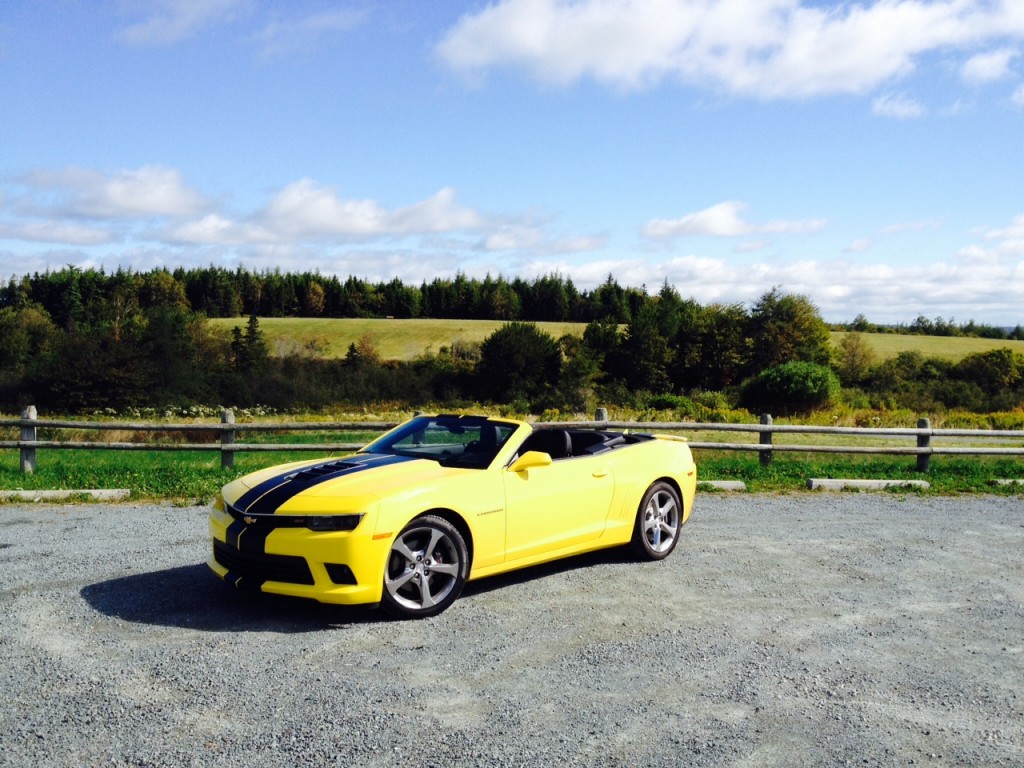 Looks-wise, my tester is almost Bumblebee to a tee. The paint and stripes are obviously reminiscent of the famous transformer, but GM has given Bumblebee a face lift. With more squinted head lights and redesigned LED tail lights out back, the Camaro now has an even more aggressive look than before. Everything is pretty much business as usual for a muscle car with its long bulging hood, massive wheels and large exhausts out back. Like I said, this look is far too brash for me, but it still plays the muscle car part well even though I think they should come up with a new wheel design, especially for the SS model. The convertible version looks pretty good with the top up or down. 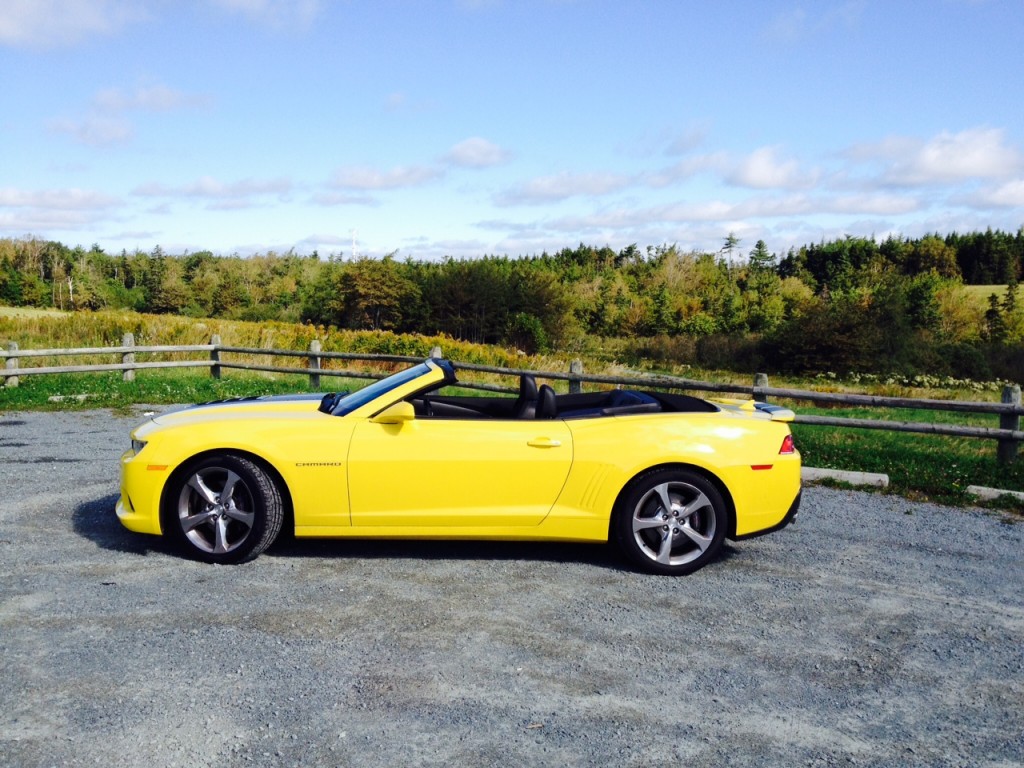 Inside is traditional muscle car simpleness, which in my view, isn’t such a great thing. Yes, I know blue-collar types are not impressed by fancy designs and gismos, however this interior is redolent of GM interiors from the past. If you step behind a GM today, you’ll see what I mean – they’re much improved. The plastics along with retro readouts for your oil temperature among other things are just not needed and they are placed below the gear shift making them hard to read even if you were so inclined to do so. One of the good things is the head-up display unit which provides good clear information to the driver so he or she does not have to take their eyes off the road. 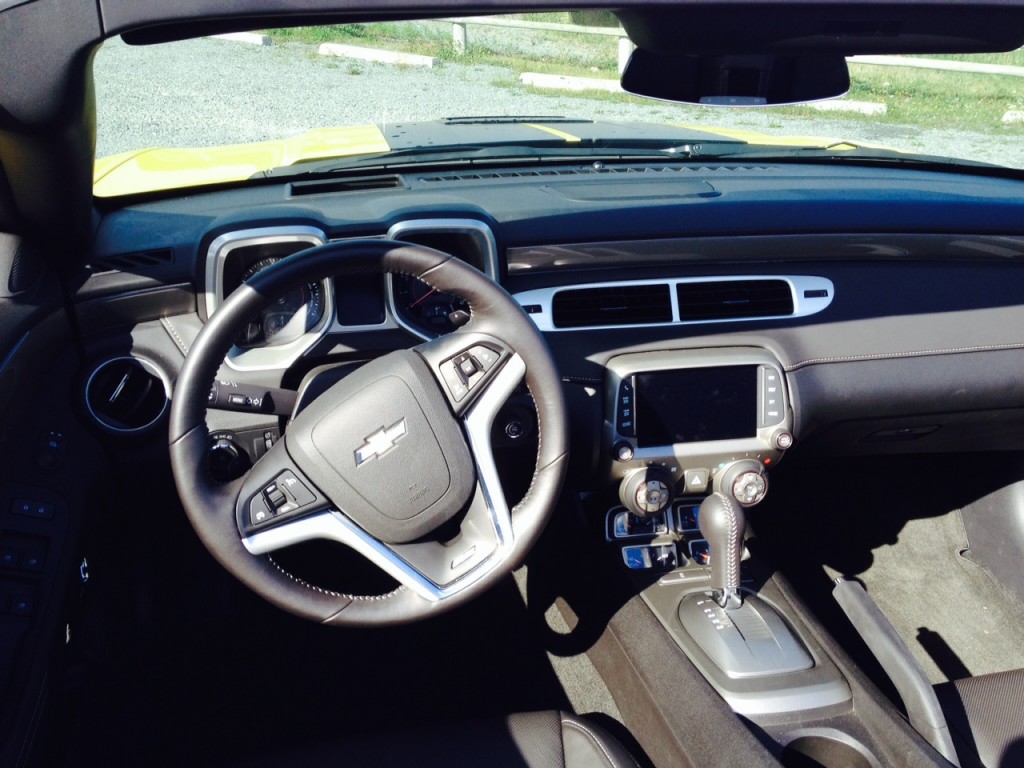 There is a back seat, but fitting any adult back there, while possible, will be a challenge. Entry and egress is pretty undignified, but hey, it’s a Camaro. Dignified isn’t what it’s going for. 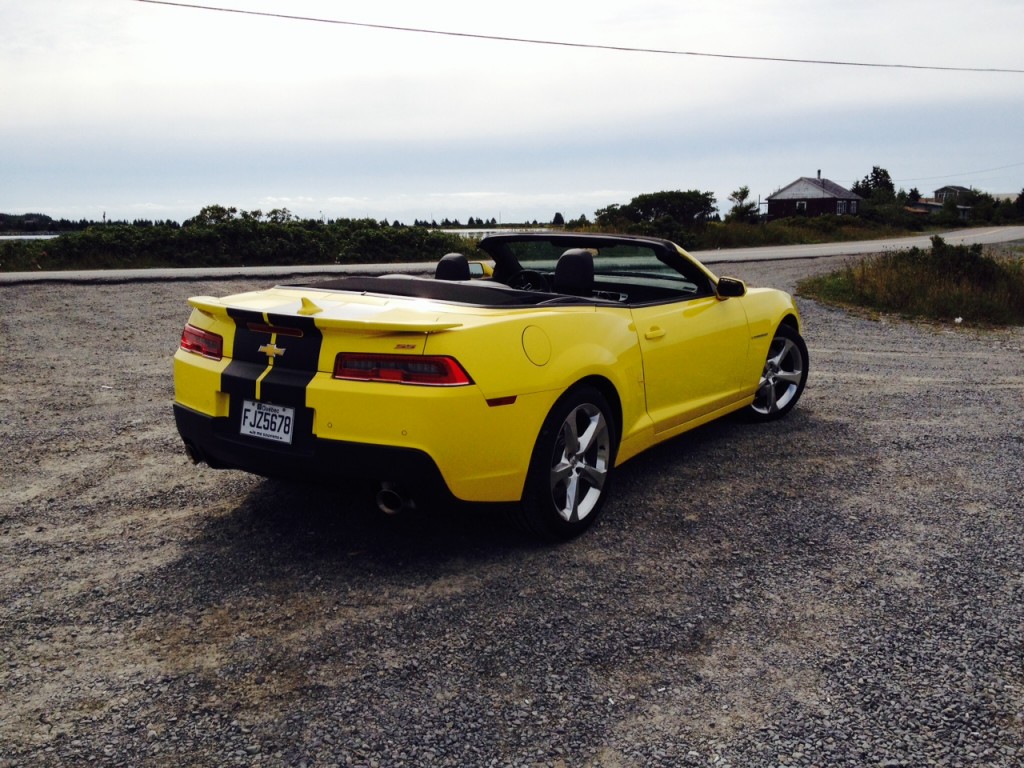 The roof is cloth and electric. This has got to be one of the slowest retractable roofs on the market today. Once you finally get it up, you have to attach it with a rather cheap feeling latch which you will get right on your first try only 50% of the time. The other half of the time you’ll spend struggling to snap it in place and any coolness factor you had just by sitting in the Camaro becomes nullified. I understand that muscle cars are all about cheap fun and cheap good looks, but there’s got to be an easier way to do this. 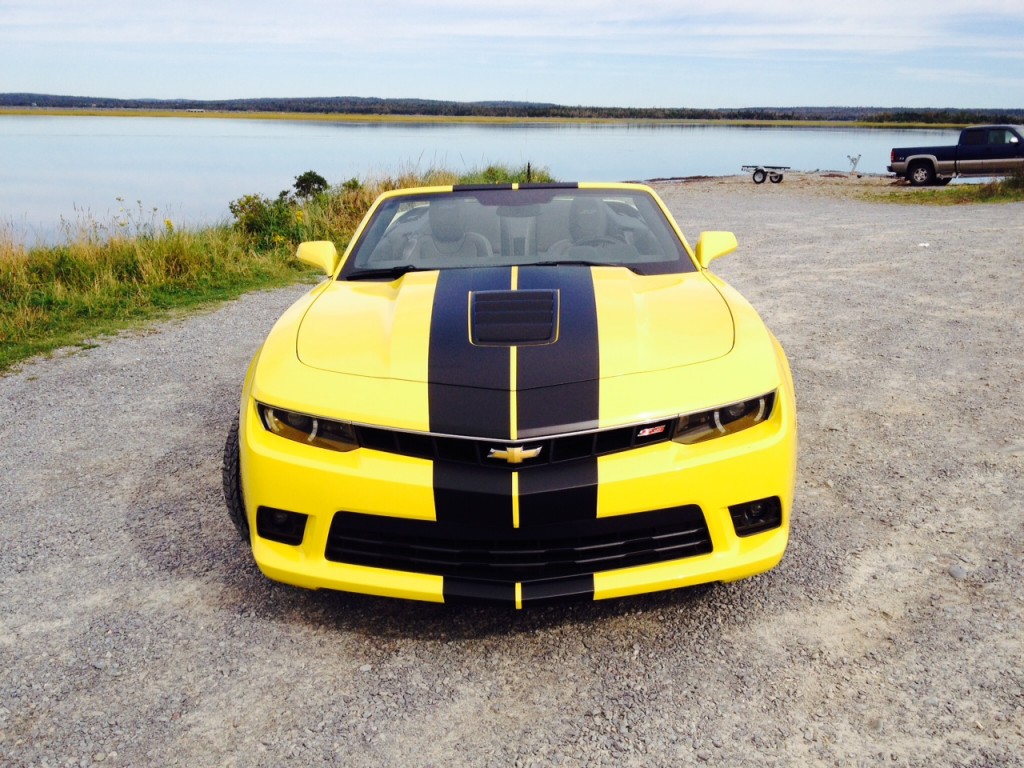 Of course, the Camaro’s party piece is its engine. The SS model comes with a 6.2L V8 small-block which churns out 400 horsepower and 410 pound foot torque. This thing sounds bad-ass, plain and simple. It’s prefect muscle car throaty. Put your foot down and it will scare passerbys and their dogs (yes, I actually did that once during my time with the Camaro and felt badly about it afterward – sort of). The drama of flooring this car is definitely there and it is fast, make no mistake about it, however there’s something about the SS that makes you think it’s not as fast as it could be. And that’s partly true since the SS with a manual transmission actually gets more power at 426 horsepower and 420 pound foot torque. Not only is that an overwhelming (and cheaper) reason to opt for the manual transmission, but another reason is because the six-speed automatic neuters the power. That is addressed somewhat by shifting the gears yourself, which is only possible through the paddle shifters, but when left to its own devices it’s sluggish and gear changes are a tad harsh. 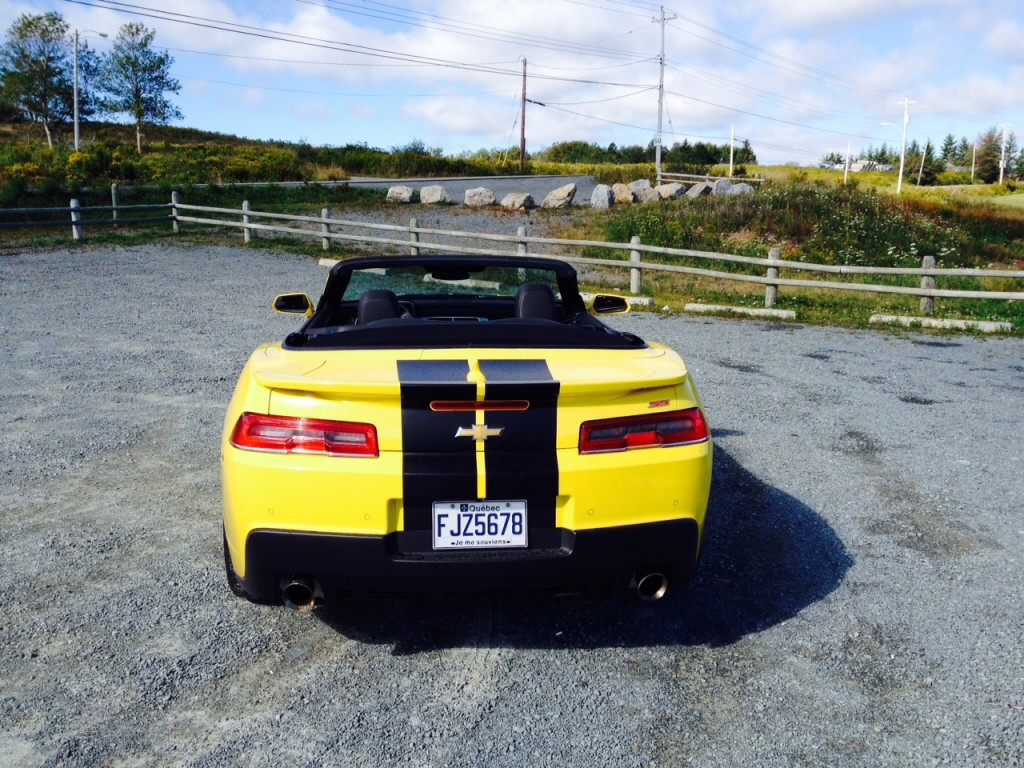 Ride quality could be better too as you will feel mostly every bump in the road. I’m more tolerant to this in performance cars, so I won’t necessarily fault the Camaro for it, but just be aware that you will have a jarring ride unless you’re on extremely smooth pavement. The Camaro does quite well on the highway, for instance. 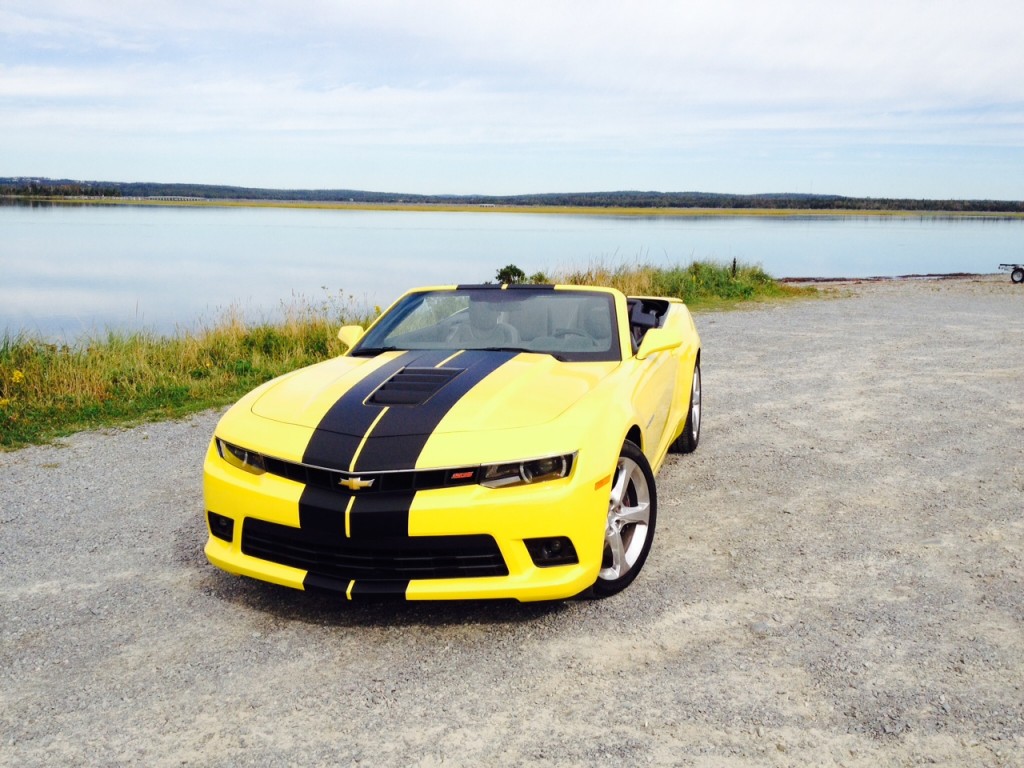 But the issue is, that harsh ride doesn’t necessarily translate into decent handling. While I realize the Camaro’s sheer size means it won’t handle like a Mini, I was still expecting some form of ability in this regard but there really wasn’t much. You can chalk that up mostly to weight, especially in convertible form. 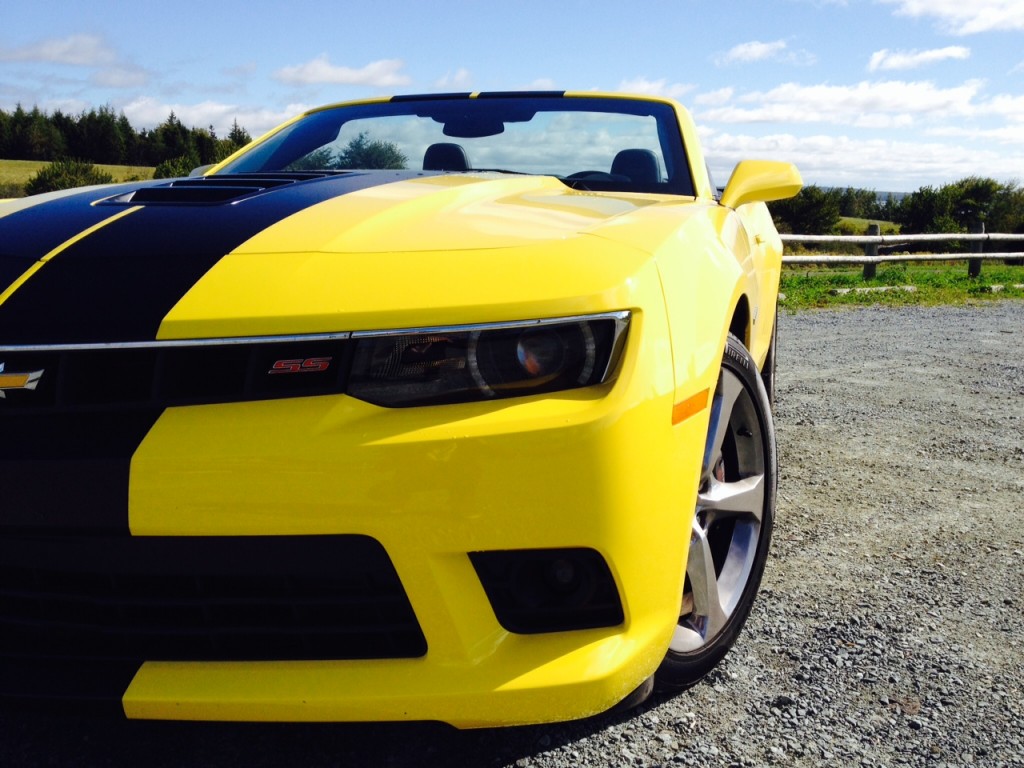 Bu muscle cars are supposed to be drag cars, not track stars you say? Maybe, but the thing that bugs me is I now know that GM can make faboulous handling cars – just read my review of the Cadillac CTS V-Sport. And while I don’t expect them to put that sort of brilliant handling in every car they make, surely there must be a place for it in a car that is known – rightly or wrongly – for performance. Even if it’s a toned down version of the CTS V-Sports handling, it would make all the difference. But it doesn’t. 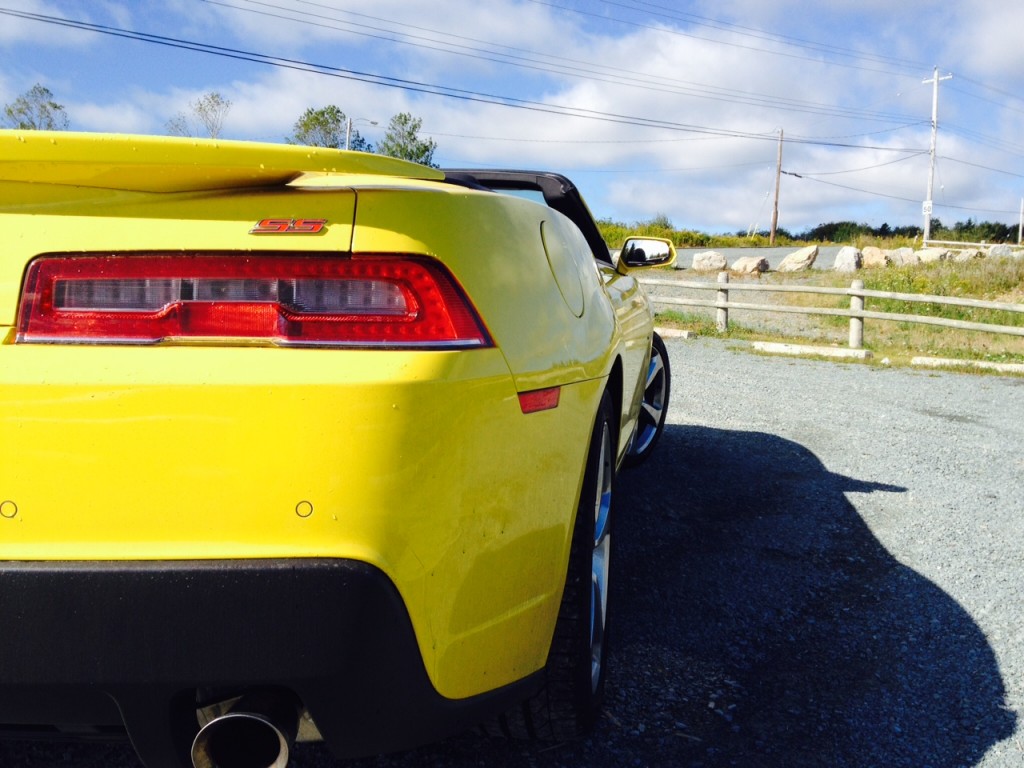 In truth, the only difference this car makes to anyone is 10 year old kids. And that may even be a reason to buy it. Er, I know that sounded creepy, but hear me out. I categorically made the day of young children everywhere. In fact, I drove it by the IWK (a hospital for sick children in Halifax) and unwittingly put a smile on a lot of children’s faces who were out for a stroll in their wheelchairs accompanied by nurses. A lot of them pointed and yelled “BUMBLEBEEEEE!!!!!!” as I was queing at a light. And I’m sorry, if that doesn’t make you feel good and put a big goofy grin on your face too then you need to go ahead and check your pulse to make sure you’re still human. In fact, the only thing better than showing the children Bumblebee in the flesh was showing off a bit by giving a waive, revving the engine and peeling away. I looked in the rear view mirror to see their jaws drop to the ground. 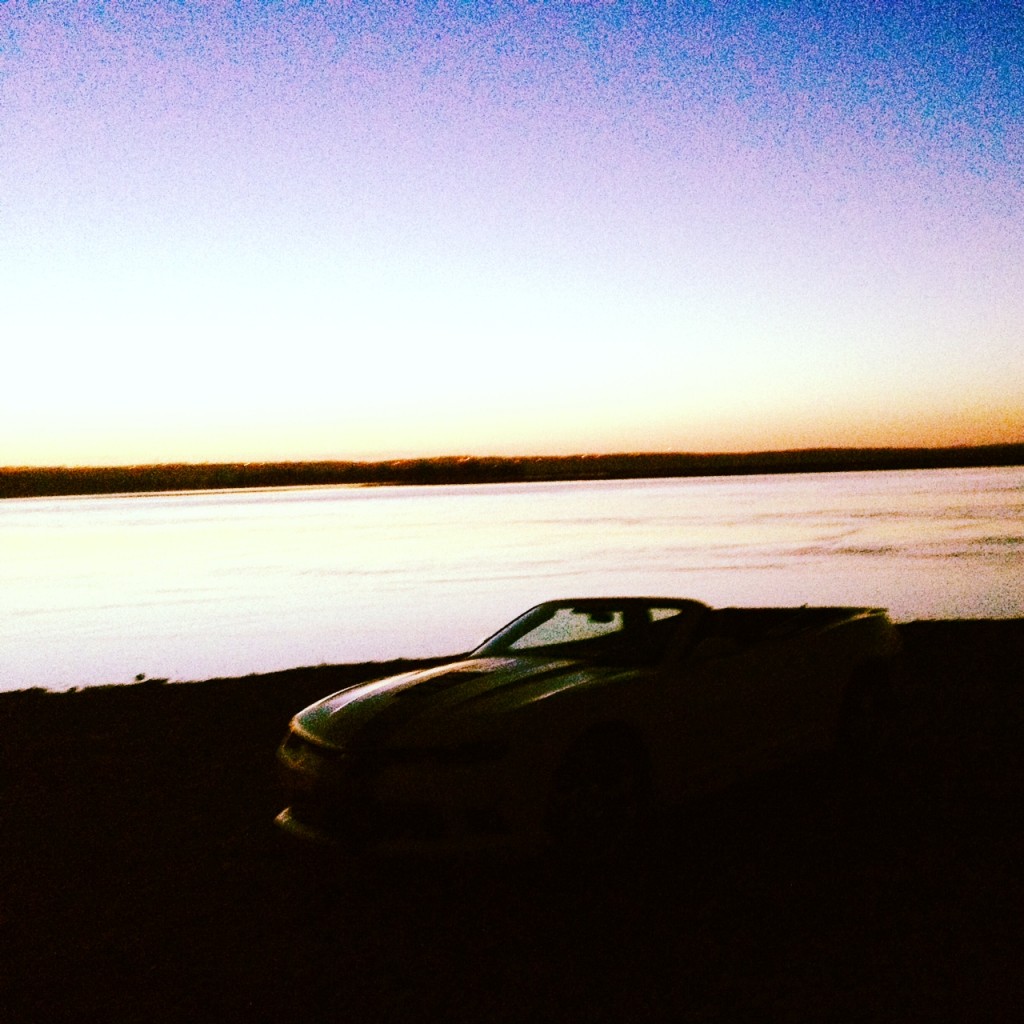 And that perhaps is the point of the Camaro and cars like it. Yes they are audacious, cheap feeling and can’t take a corner but who cares? People love this car. And by the end of the week I started to really enjoy it too. Some things in life don’t need to make sense and the Camaro certainly doesn’t from a lot of aspects. But like the drunk uncle that ruins Christmas, you couldn’t imagine life without it.

And honestly, that’s what makes cars special. They don’t have to be good, as long as they evoke any sort of feeling in you – positive or negative – it doesn’t really matter. Having an emotional connection with a machine is a feeling like no other. I can’t fault anyone who wants this car. In fact, after a week with it, I can even see myself owning one some day.