I’m not really a big fan of SUV’s.  While I somewhat understand the appeal, I’m the type of person that puts the driving experience ahead of just about everything else. I don’t care if it looks ugly, is horrid on gas, has no cargo room and will likely fall apart. If it feels like it fits me like a glove when I drive, then that’s all that matters to me.

Therein lies my problem with SUV’s. The majority don’t drive particularly well. Sure, you can get from point A to point B, but you can’t carve into a corner the same way you can with a wagon.

I recently told my girlfriend that I would only consider buying an SUV from two or three manufacturers because those few are the only ones seemingly capable of making a decent handling SUV. BMW is one of those three.

In fact, BMW was among the first to introduce the idea of an SUV that cold also take a corner with the first generation X5. Since then it has developed the X1, the X6, the soon to be released X4 and, of course, the X3.

The original X3 was perhaps one of BMW’s rare missteps. It didn’t look particularly good, it didn’t drive particularly well, the quality was not befitting of any BMW and the price was ridiculous.

Now that the new generation is out, BMW has promised to address all those issues, specifically the handling issue since this iteration has the M sport pack. 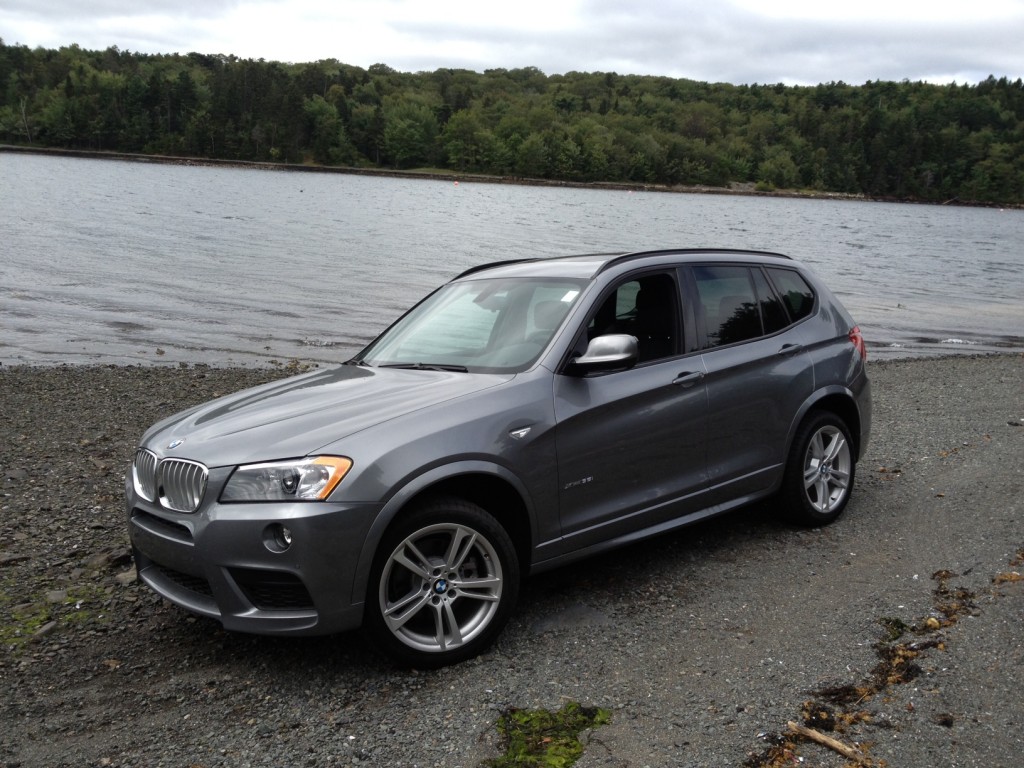 That M sport pack adds some of visual elements as well such as M wheels plus side skirts. Overall the look is fantastic. The X3 looks much more aggressive and much less awkward. It’s a handsome SUV from any angle and it commands lots of presence on the road, especially in my tester’s grey paint.  This generation X3 has grown in size and it is now almost the same size as the original X5 when it first debuted, however it still looks like a more compact SUV. 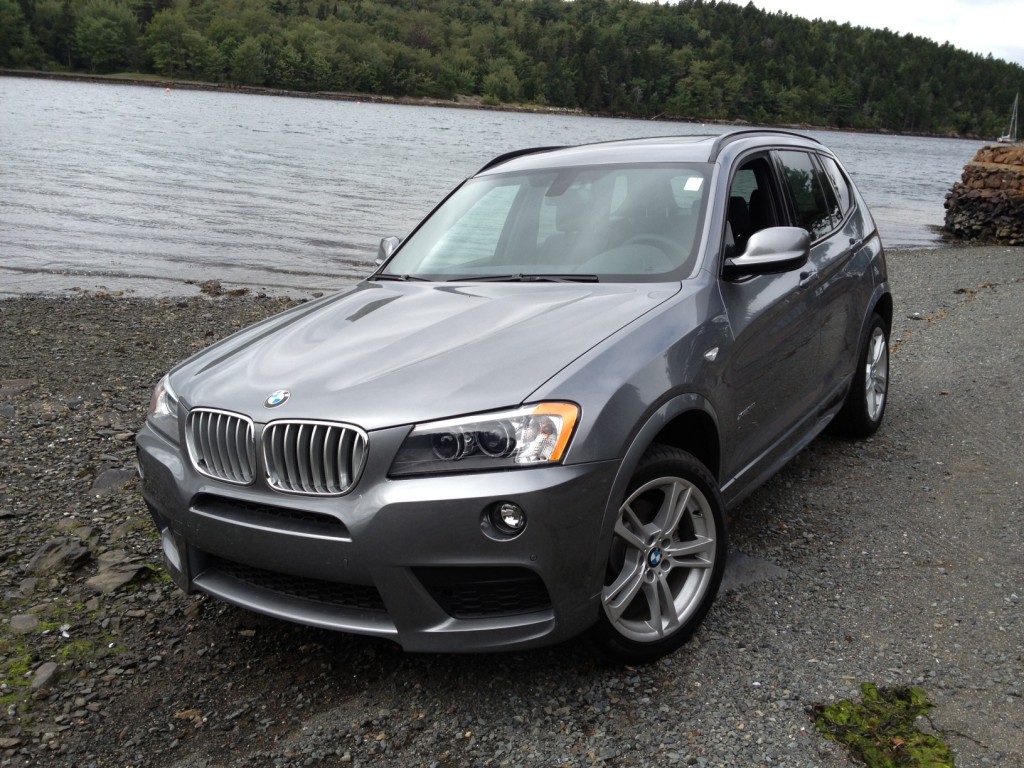 Inside, it is anything but compact as there is loads of legroom, head room and knee room no matter where you choose to sit. And yes, that includes the centre row. The cabin has an airy feel, though it does seem to be a bit dark inside, which is actually something I prefer. 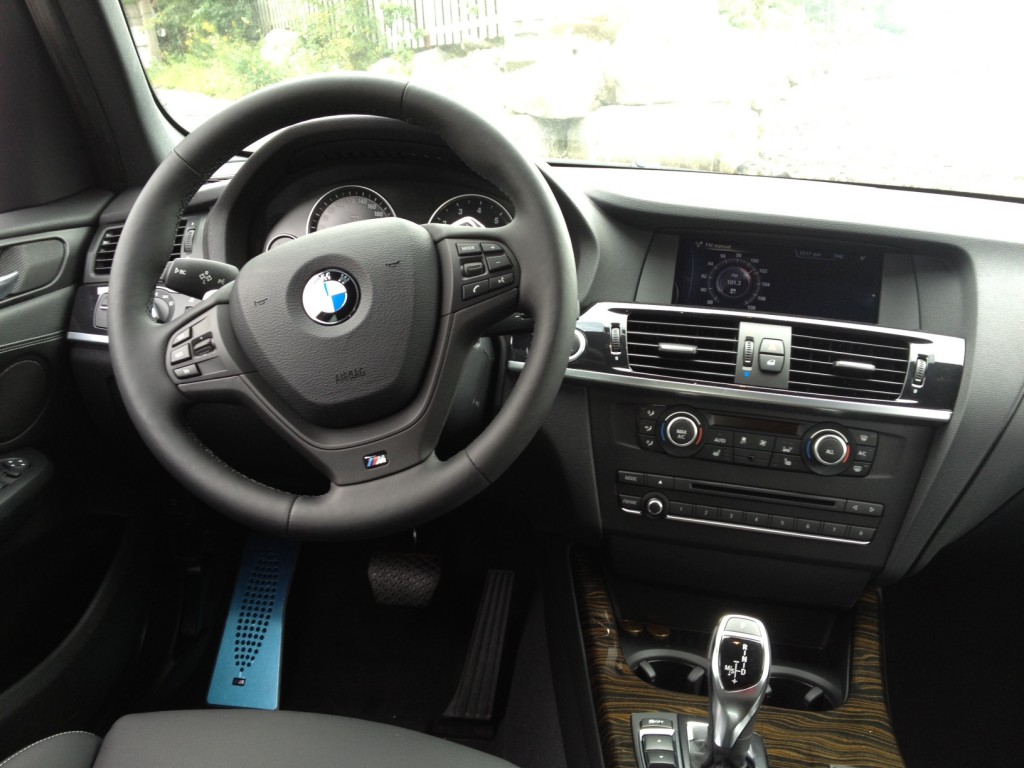 The layout is typically BMW meaning it is conservative and classy. Soft touch materials can be found just about everywhere and materials feel top notch, as you’d expect. The steering wheel is nice and chunky and feels just right, thanks to that M sport pack and you also get sport seats which not only keep you in place, but are also very comfortable as well. Both the gauges and widescreen on the centre console are clear to read. The latter is controlled by BMW’s iDrive system which, despite being simplified over the years, is still a bit difficult to operate. 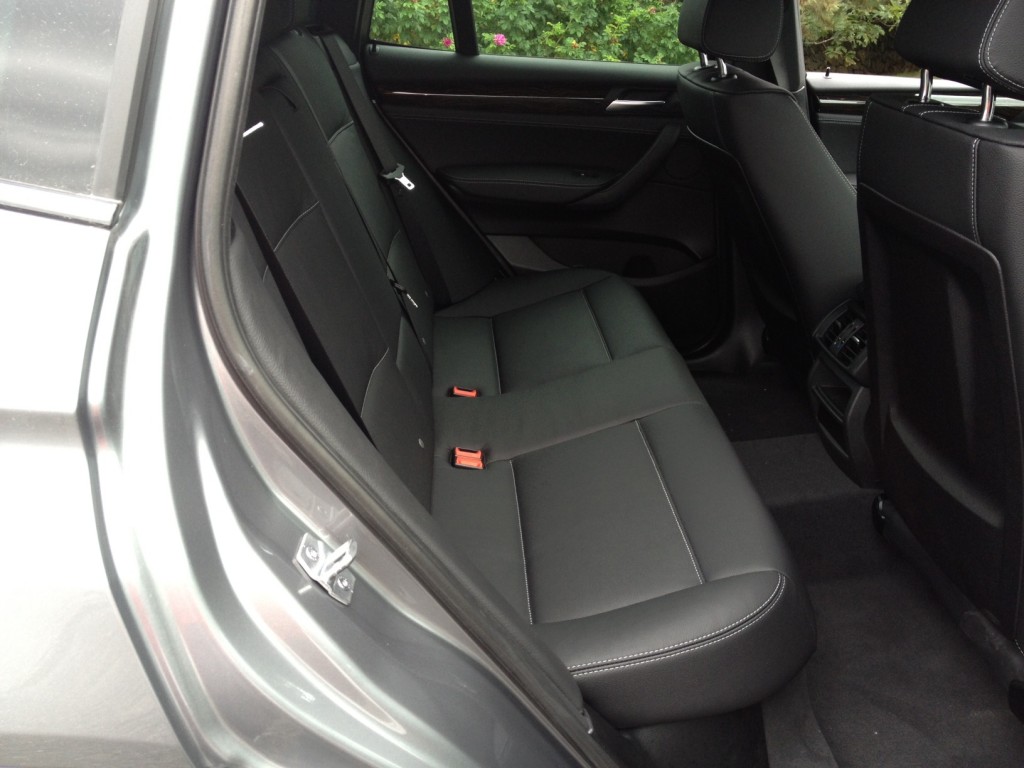 Cargo room is quite good as it offers 782 litres space, with additional little cubby holes underneath the cover. When those seats are folded, you get  1,600 liters worth of cargo. In other words, if you need lots of space, the X3 will not disappoint. 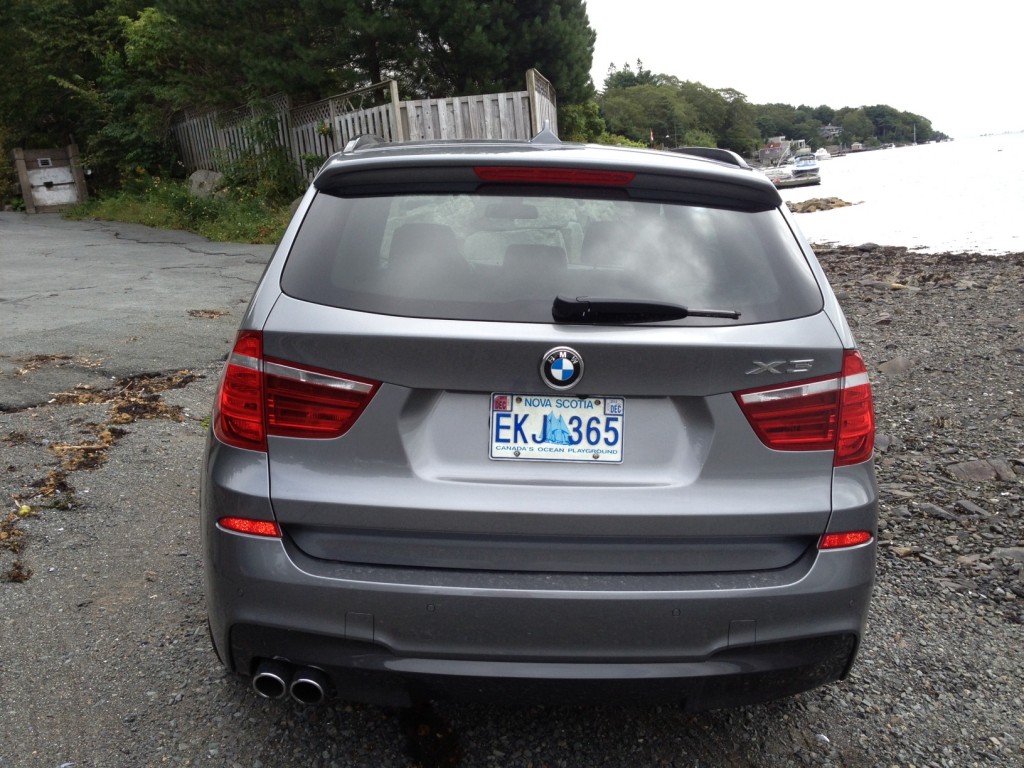 That stuff is all good, but let’s move onto the great stuff starting with BMW’s infamous 3.0 litre turbocharged inline six which produced 300 horsepower and 300 pound foot torque, not to mention one of the most intoxicating exhaust notes around. I have to say, BMW’s audio unit is good, but to be honest, I didn’t drive with music on too often as that exhaust note was better than any top 40 song. 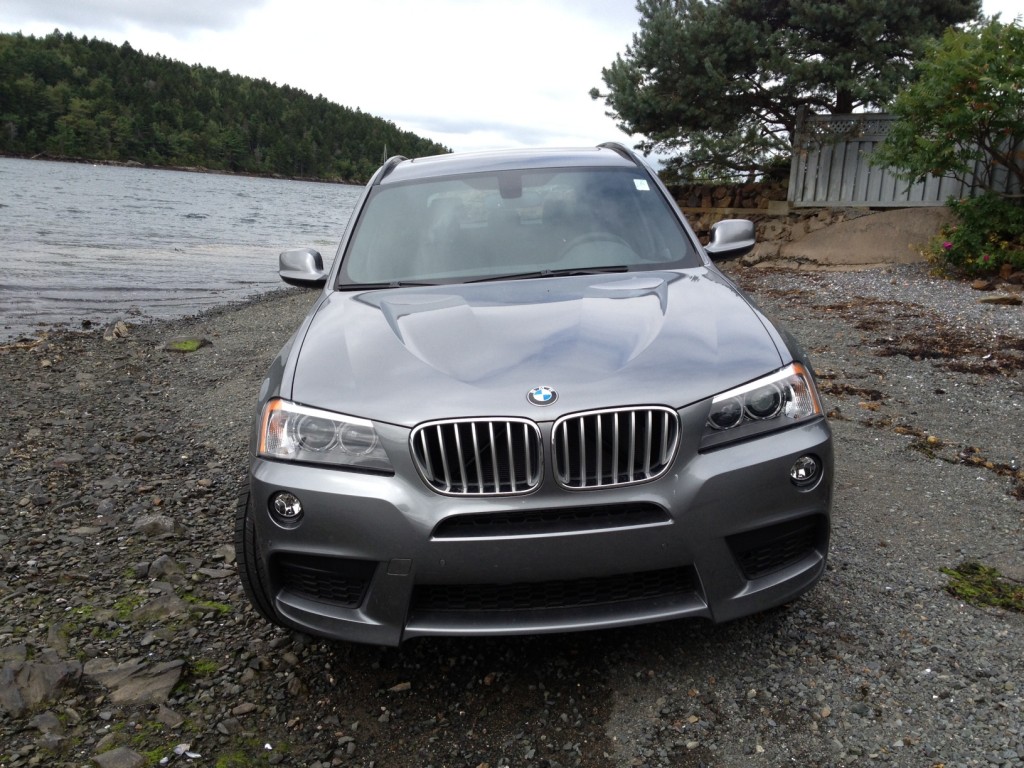 Power delivery is almost instant and the X3 is happy to dart away from a red light with ease. Even though the X3 weighs quite a bit, it’s still quite agile. The 8-speed automatic shifts cleanly with little delay. Shift it into manual mode (or just flick one of the paddles) and you’ll have control over the gears yourself. I recommend this since the 8-speed auto tends to upshift rather quickly for the sake of fuel efficiency. Hanging on to higher RPM’s allows for a much more engaging experience and gives the sense that the diver has more control. Long gone are the days of getting a six-speed manual which makes me sad because driving this thing with a proper stick would induce even more fun in my mind. Anyway, if you choose not to use the paddles and go for the shifter instead, just be aware that the set up isn’t typical. You have to move the gearshift forward to down shift and towards you to upshift. This may seem a bit backwards but it actually takes no time at all to get used to. 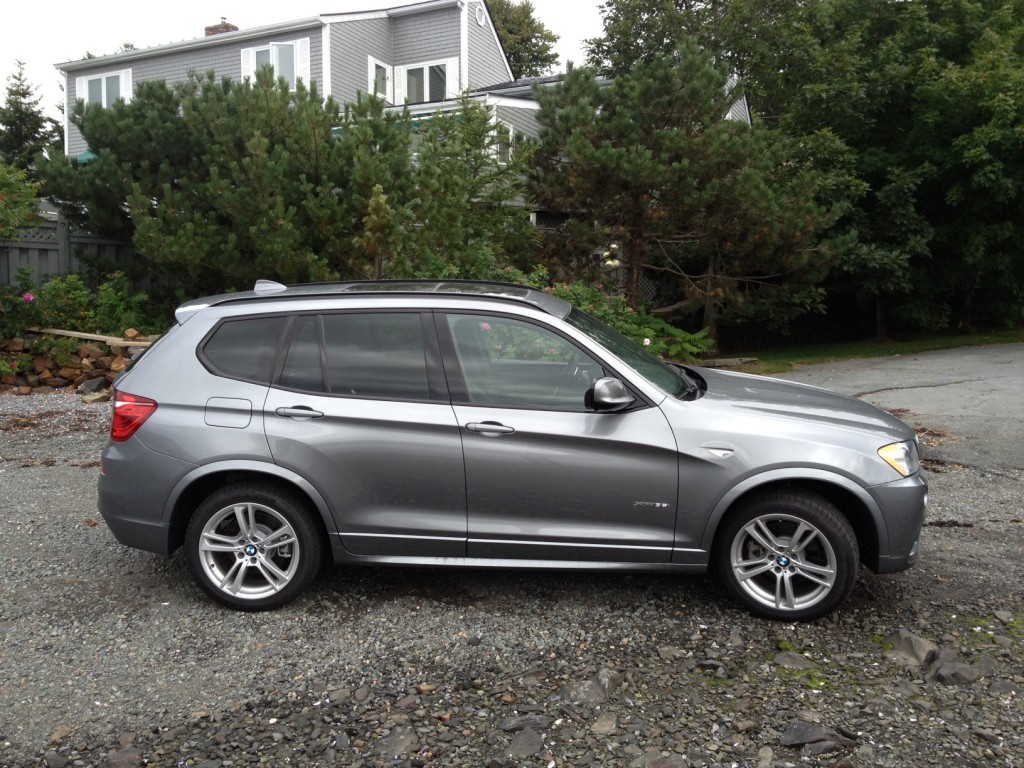 Now, the biggy. Can it actually take a corner? Yes. Oh yes. While it doesn’t exude the same confidence that BMW’s sedans and coupes do, it can still hold its own. At no point did I not feel confident throwing the X3 into a corner. It’s stable, poised and planted with minimal body roll. This is what I mean when I say I’d only consider buying an SUV from only a handful of manufacturers. On top of being a capable cornering machine, the steering feel is exactly what it should be during spirited driving. However I’d prefer to have this direct weighted steering in normal driving situations as well. The speed sensitive steering gets rather numb in low speed situations. 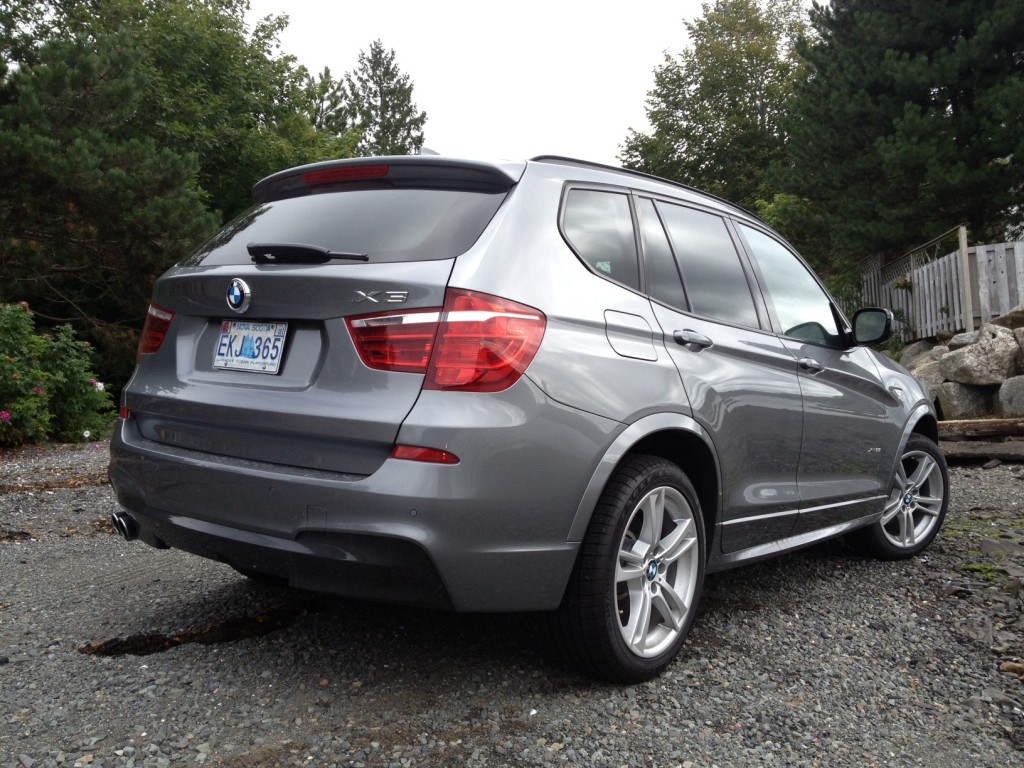 Part of this has to do with the driving mode you select. There is Eco, Sport and Sport plus. The former is a rather dull experience for the sake of an extra MPG AKA not worth ever driving in this mode. The second mode sharpens throttle input and sharpens gear changes, while sport plus engages the dynamic suspension giving it those impressive handling abilities. It also partially deactivates the stability control allowing a bit of tail happy fun. 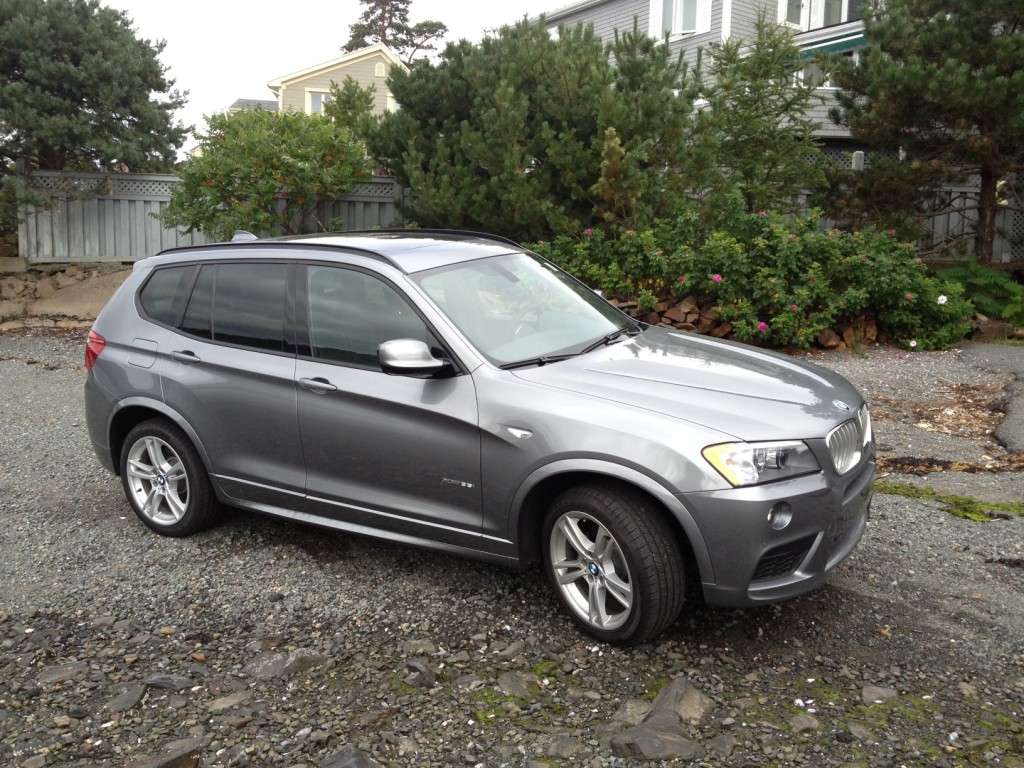 Lastly, BMW is incorporating its ‘efficient dynamics’ in almost every model it sells now. This includes the aforementioned quick gearshifts, a gauge which tells you when you’re driving efficiently and not-so-much and also include is stop/start technology. Basically the engine will automatically turn off if you’re stopped for more than a few seconds like at a red light. I found this feature to be more irritating than clever as the delay when you take your foot off the pedal onto the gas and the engine restarting isn’t quick enough for me. I’ll admit, it does start up impressively quick, but not quick enough for my liking. Thankfully you can deactivate this feature with the push of a button. However with all these features engaged the X3 generates a 9.7 L/100 kms fuel efficiency rating in the city and 7.0 L/100 kms on the highway which is quite impressive. 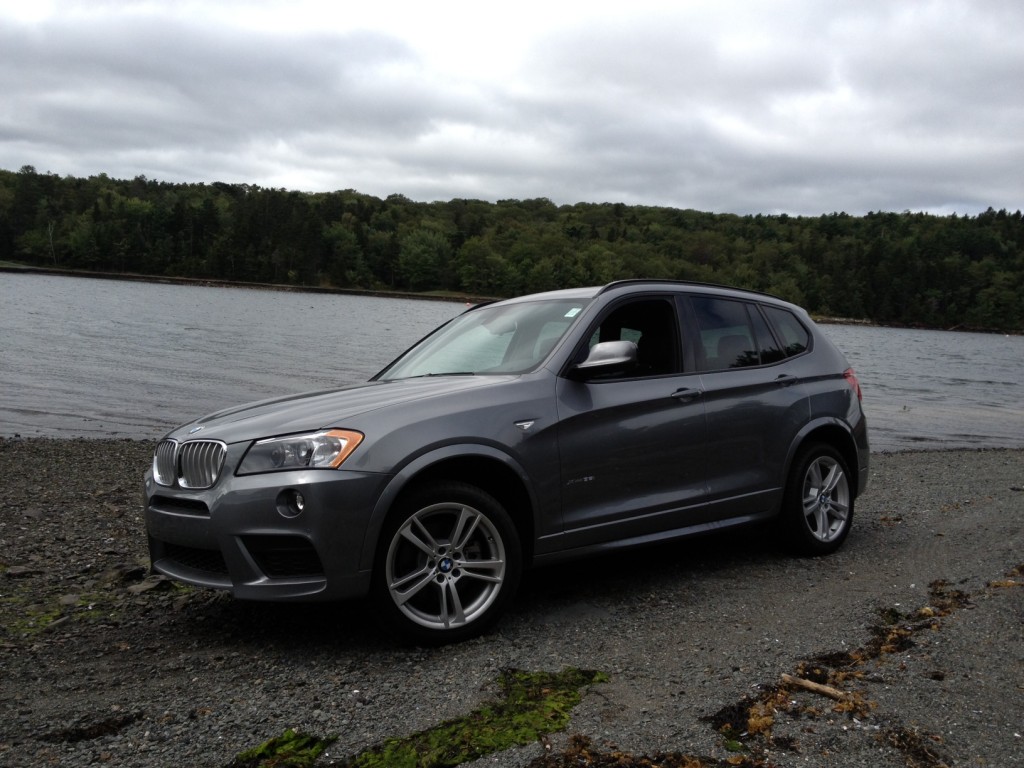 But even more so is how BMW seems to understand that there are still people out there who care about performance. Just because you have a lot of people and cargo to move doesn’t mean you should sacrifice fun.
Price: Approximately $63,000