I’ve always wondered why people don’t care about certain things: politics, the food they eat, the clothes they wear etc. Those are all things that probably should be top of mind on most days since they all affect our everyday lives.
And if you’re at all like most people then cars probably play some sort of role if your every day life too whether it’s car ownership, carpooling, taking taxis or just plain dealing with traffic as a cyclist or a pedestrian. And yet there are still some people who couldn’t give two hoots about cars. It makes no sense to me.

Still, these nonchalant types make up a decent portion of the population for some reason and even though they may not care about things that affect their lives, they are still a targeted portion of the marketplace. As such, they get product specifically catered to them.

What does that product look like? Well if you’re in politics you target people who don’t care by playing the scare tactics. If they don’t care about politics, chances are they won’t be bothered to look into whether or not what you’re actually telling them is true.

For food there’s places like McDonalds where health concerns and taste buds are not a concern for careless types.

And when it comes to cars, the Nissan Versa, Toyota Corolla and Hyundai Accent covers the market pretty well for people who care not one wit about driving.

But what if you’re the boring non-caring type that still wants to treat yourself for all the hard work you’ve put in at your day job? 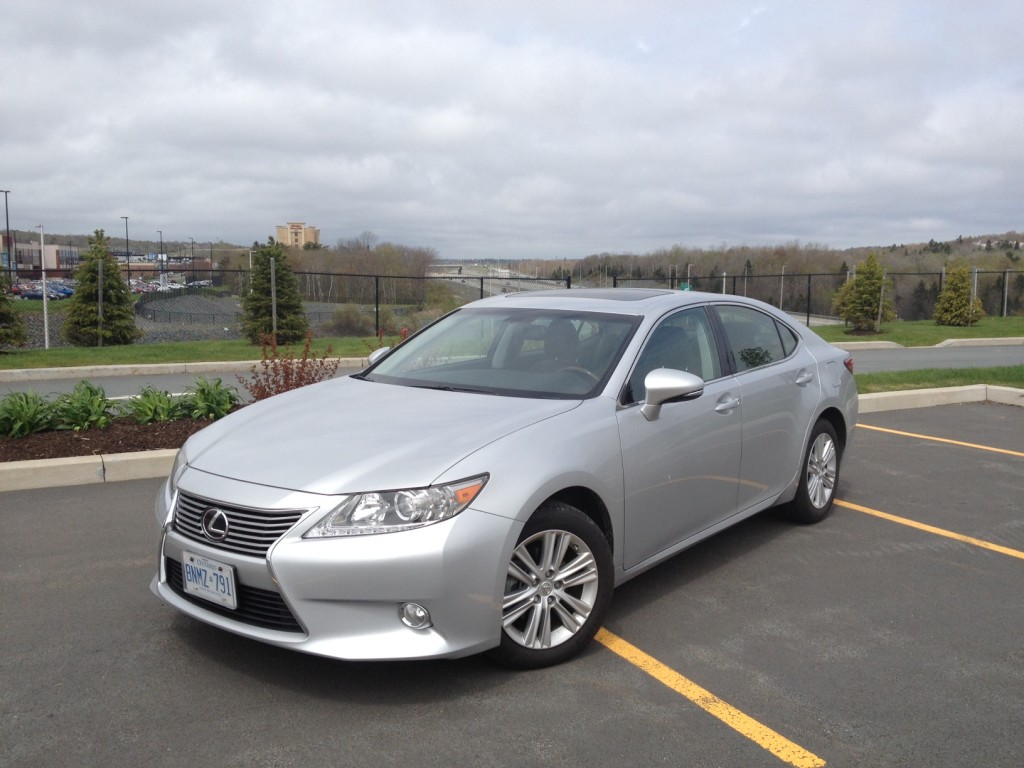 First, even though the ES 350 now has the corporate family look which isn’t a bad thing, I’d still be poised to accuse it of having the least amount of character of all the Lexus. For some reason this design still screams bland to me, but I suppose that’s what the typical ES customer would want: uninteresting wheels, fairly typical tail light design, side profile the same shape as 80% of larger sedans out there etc. Regardless of your exterior styling tastes, the design is far from offensive. 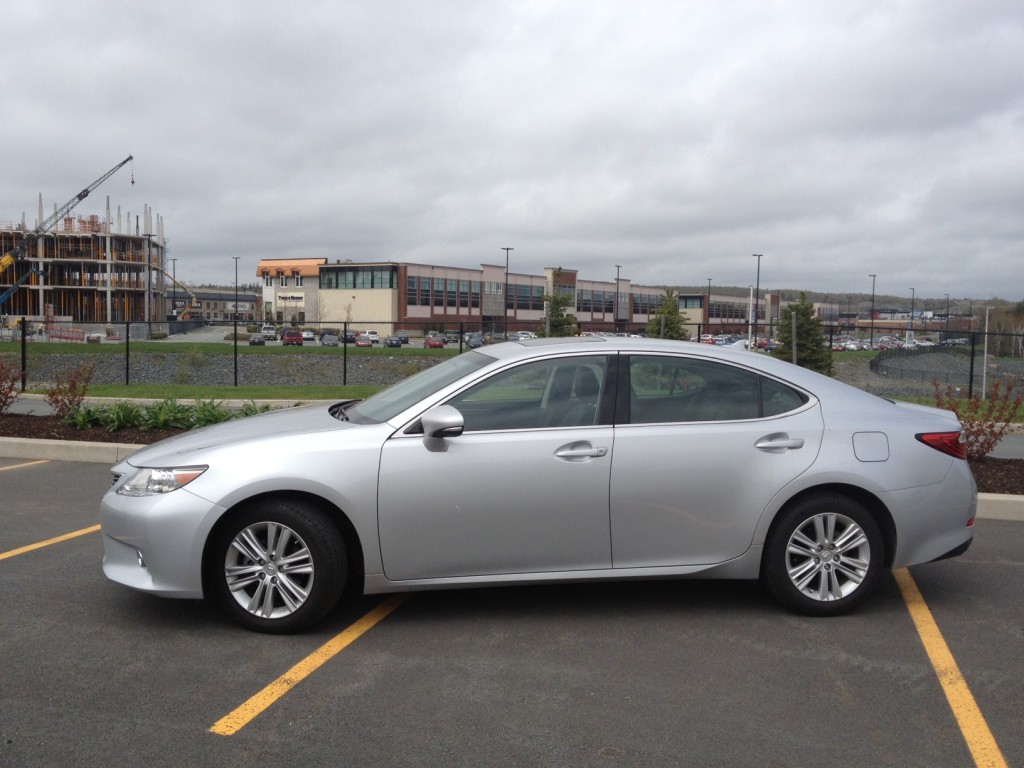 Inside, the story is much better with one of the better designed luxury interiors I’ve experienced in a while. I know there has been some debate as to whether or not Lexus as a brand is worth it over the loaded up Toyota models and I can say that, despite the interiors of Toyotas being quite good, the new interiors from Lexus almost justify the price premium alone. The new dash is more focused, clean and airy feeling with buttons logically laid out and of course, lots of fake wood, including on the steering wheel, which used to be a bit of fad, but Lexus is among a few brands bringing it back much to the delight of this author.  Lexus’ answer to BMW’s iDrive works decently well, however I find the mouse-like function to be a bit sensitive. You eventually get used to that though. Scrolling through the seemingly endless menu options is easy, yet irritating giving all the choices to select through. The good news is the information presented on the screen is clear and crisp. 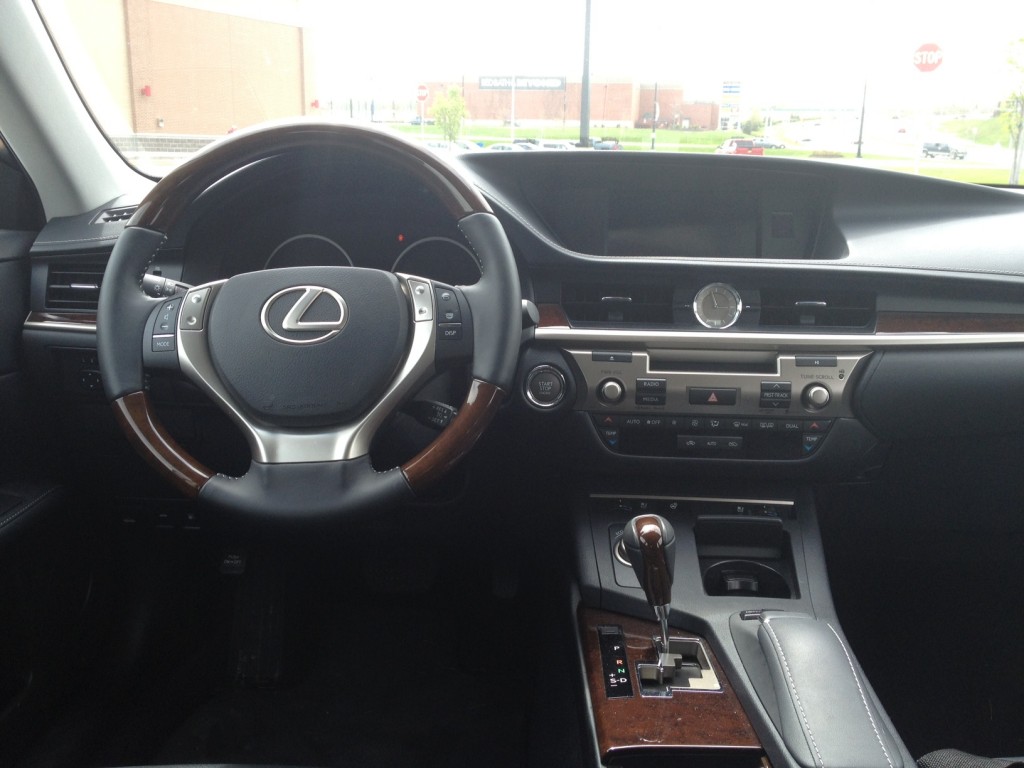 The standard audio system is excellent, the sound is clear and crisp as well. Being a Lexus, it comes with other great features like LED’s and HID headlights, leather everywhere, heated steering wheel, heated and cooled seats, Bluetooth connectivity and much more. 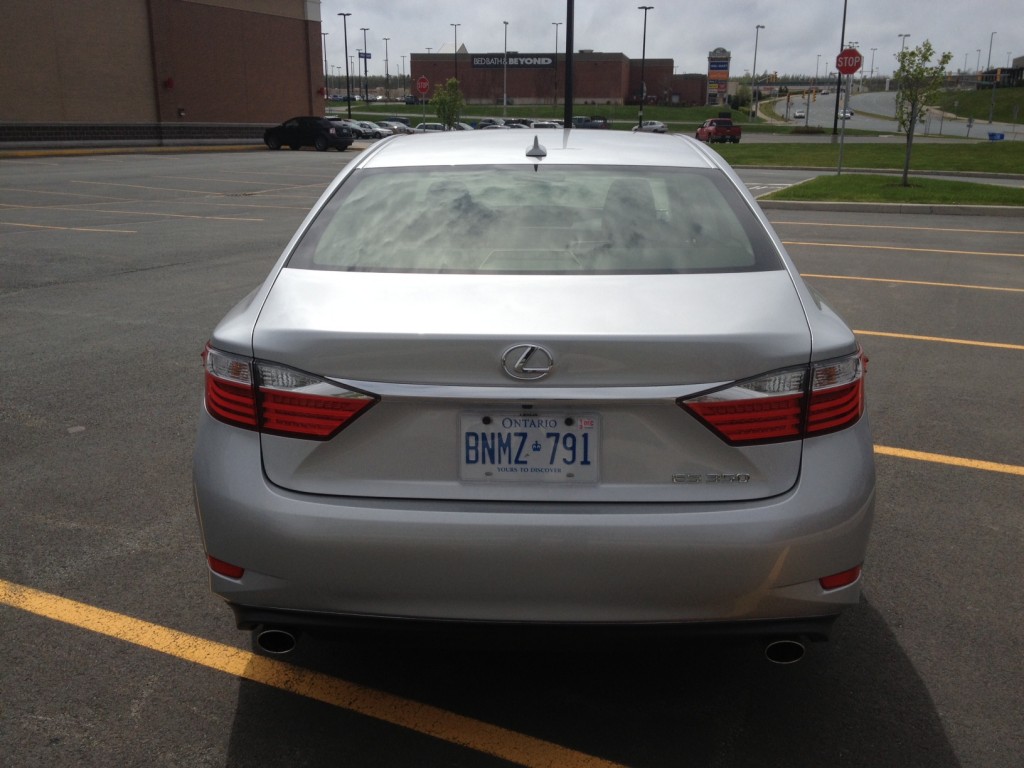 Rear seat legroom and headroom is plentiful, which is perhaps why I see a few cabbies using ES sedans around Halifax. This really would make a good premium paid ride alternative to the Lincoln Town Car, even though it isn’t as big, it is certainly more than adequate as a contender. Trunk space is also large, but you won’t find any folding rear seats which, to be honest in this day and age, is quite ridiculous. I don’t see any reason not to offer this feature (aside from hybrid models). 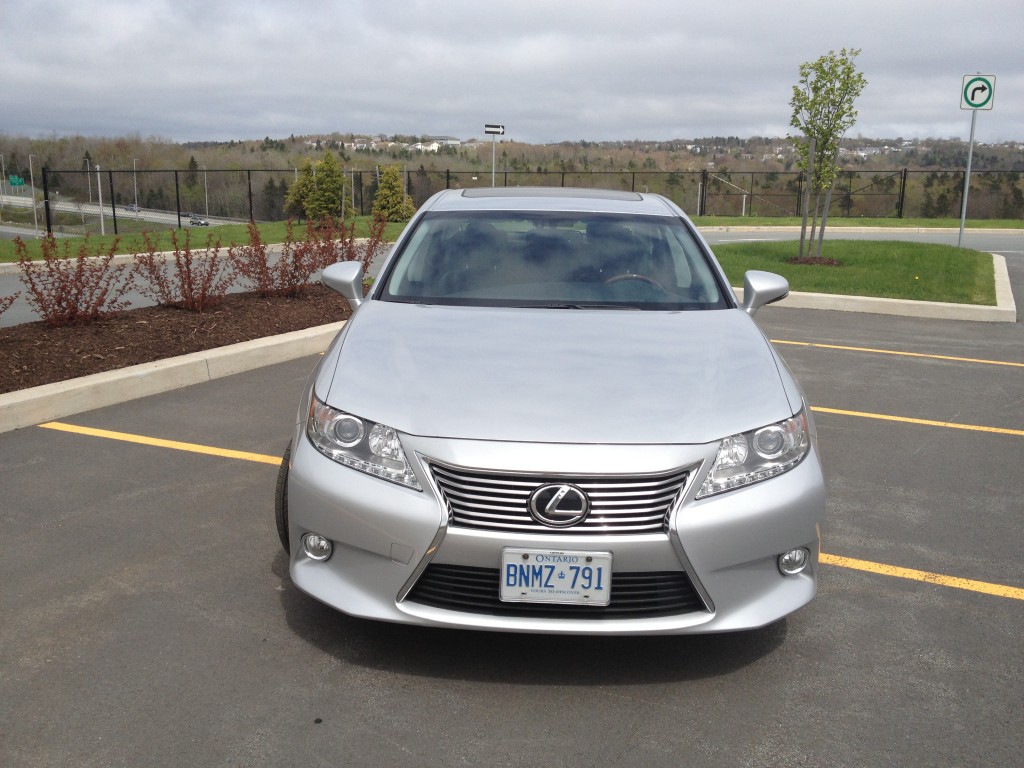 One feature that is offered, is the ability to switch through different driving modes through a dial on the dash. You can choose from eco, normal and sport. Eco is, as you’d expect, a lot of numbness, boringness and slowness all for the sake of gaining an MPG or two. I’m sure those concerned with fuel efficiency would likely opt for the ES 300h hybrid so having an eco option likely isn’t necessary. Normal mode feels, well, normal and is likely the mode that most ES drivers will use. The Sport mode is the mode that I used most of the time. It changes the weight of the steering and also let’s you have a bit more throttle input. While the weight of the steering and throttle input change is noticeable, this is far from any sport sedan in any mode. 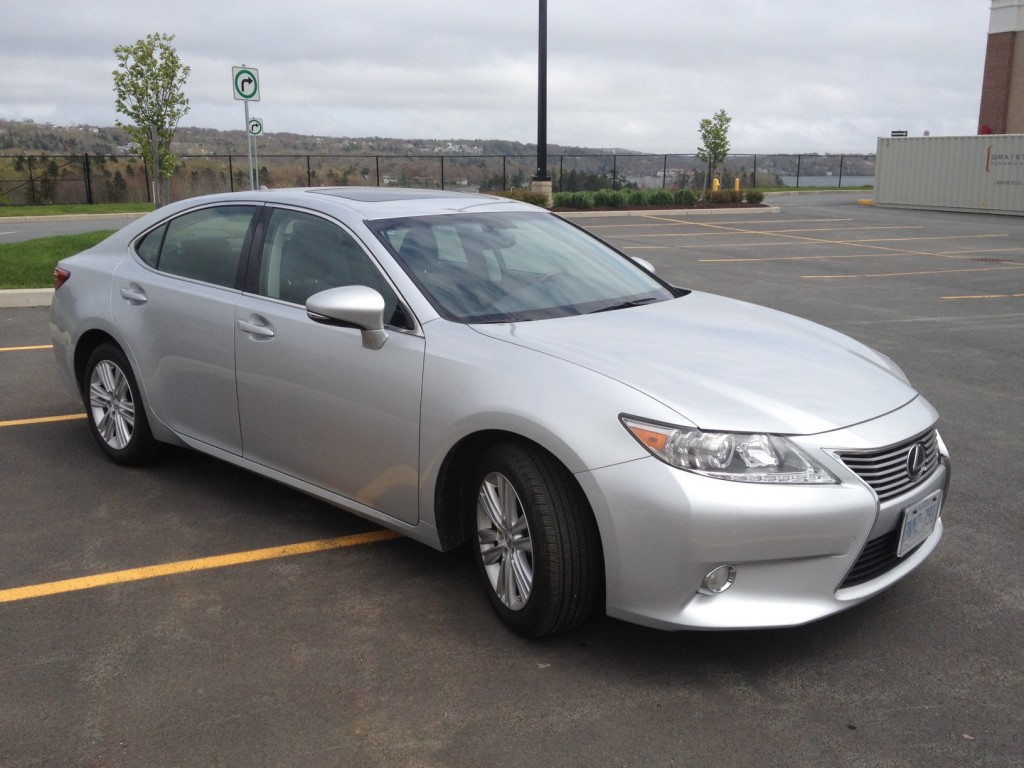 Power comes from a 3.5 litre V6 which produces 268 horsepower and 248 pound foot torque. Power delivery is smooth, albeit quite quiet, even when pushed. This quietness is a characteristic of the car in general so there was nothing out of place with that muted sound necessarily. I found this power to be adequate for every day driving, including on the highway where passing slow moving vehicles proved to be no problem. In fact, the ES 350 does quite well on the highway as it glides along, however I found that it tended to bounce of bumps and potholes rather than absorb them. 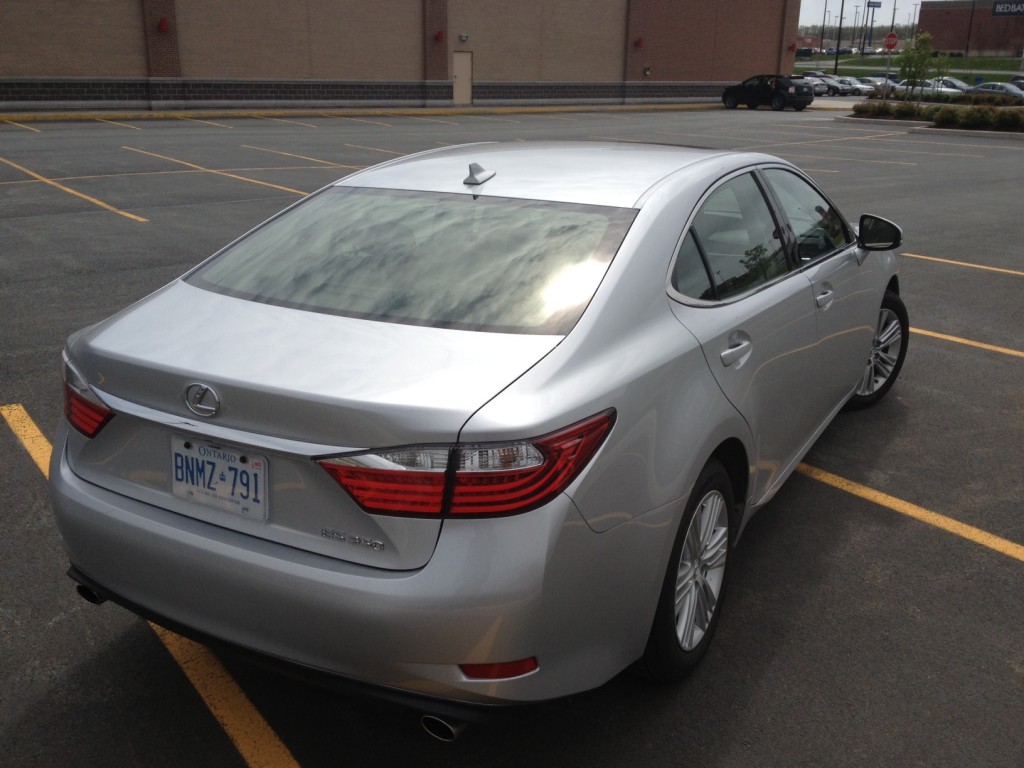 Speaking of the suspension, as you might have inferred, it is quite wafty. It’s definitely set up for comfort and it delivers exceptionally in that regard – just don’t expect to take most corners aggressively without screeching tires and lots of body lean. This is okay because the ES is a luxury car for those not interested in that sort of driving. 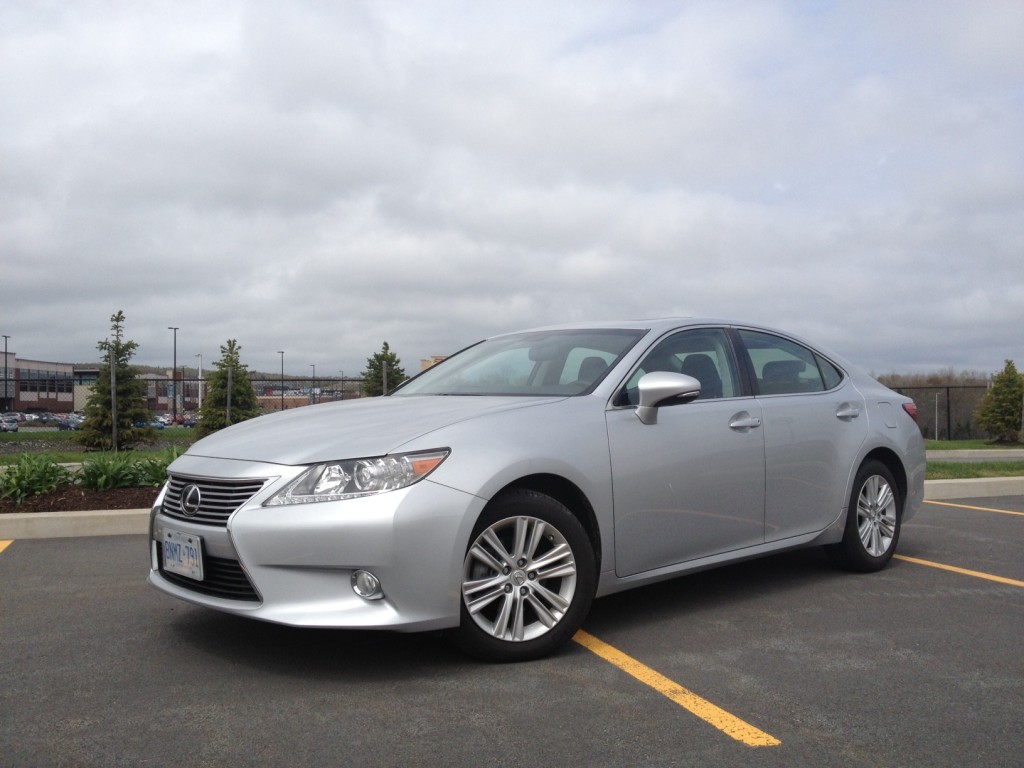