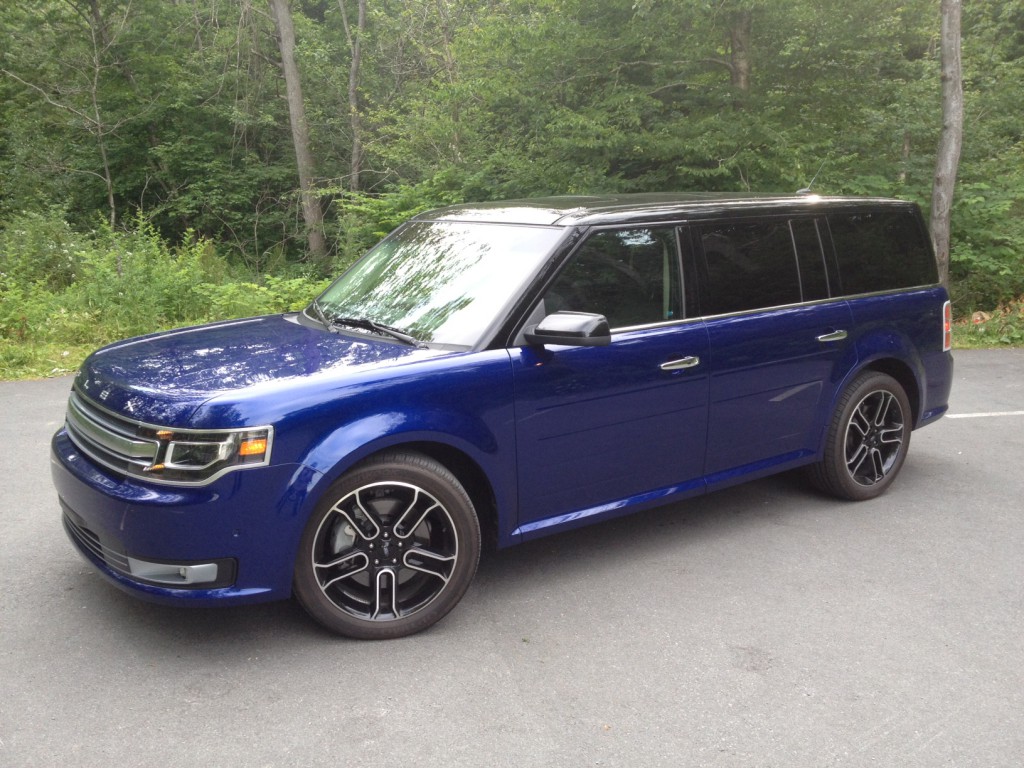 It always amazes me when someone reaches such a heightened point of fame that their last name is no longer required.

Madonna, O.J., Beyonce, Lebron, Barack. Any one of those names unrecognizable to you? Of course not. Some people, right or wrong, consider them to be legends in their own right. This happens sometimes in the car industry too:

Civic, Corolla, Corvette, Caravan. Aside from the fact that they’re all names that start with the letter ‘C’, we also all know what type of vehicle they are without having to know the their make. Even people who know as much about cars as they do brain surgery could describe any of those vehicles without hesitation. Sometimes the make of the vehicle isn’t even needed on the vehicle itself. While most manufacturers are now making their badges bigger and more prominent, cars like the Mustang or the GT-R have so much history or hype that the Ford and Nissan badges aren’t even needed. The name sells itself.

There are only a few vehicles whose marketing departments have gotten massive bonuses as a result of these efforts. Why then, did Ford decide to try a similar scheme with the Flex? There is no Ford badge on the front grille. Just ‘F-L-E-X” on the lip of the hood. And in the back, the Flex name spans from one side of the tailgate to the other, while the Ford emblem itself is tucked away, almost hidden, in the right corner of the tailgate. Is the Flex so widely known that it doesn’t need any help from the Ford name for identity?

“What’s a Flex?” asked an elderly gentleman to himself  aloud after sizing up my tester up and down for a good minute, not realizing I was sitting in the vehicle with the windows down.

“It’s a Ford,” I replied back. After being initially startled that I was in the driver’s seat, he came up to ask more about it.

“Oh, I thought maybe Flex was a new car brand,” he said. He then went on to explain that if he had known it was a Ford, he likely would have considered buying it because along with styling that seemed to agree with him, he mentioned that he trusted Ford as a brand. When I asked if he would buy it thinking ‘Flex’ was a new brand of car he seemed more hesitant.

But perhaps the reason is because Ford is well aware that they’ve got a future collectable on their hands. The Flex was named the most likely vehicle to become a collector back in 2009 by the Friends of the National Automotive History Collection (NAHC) in Detroit. Maybe they’re just thinking well into the future about the Flex’s worth.

So does Ford have a legend in the making with this new version if the Flex? I drove one to find out. 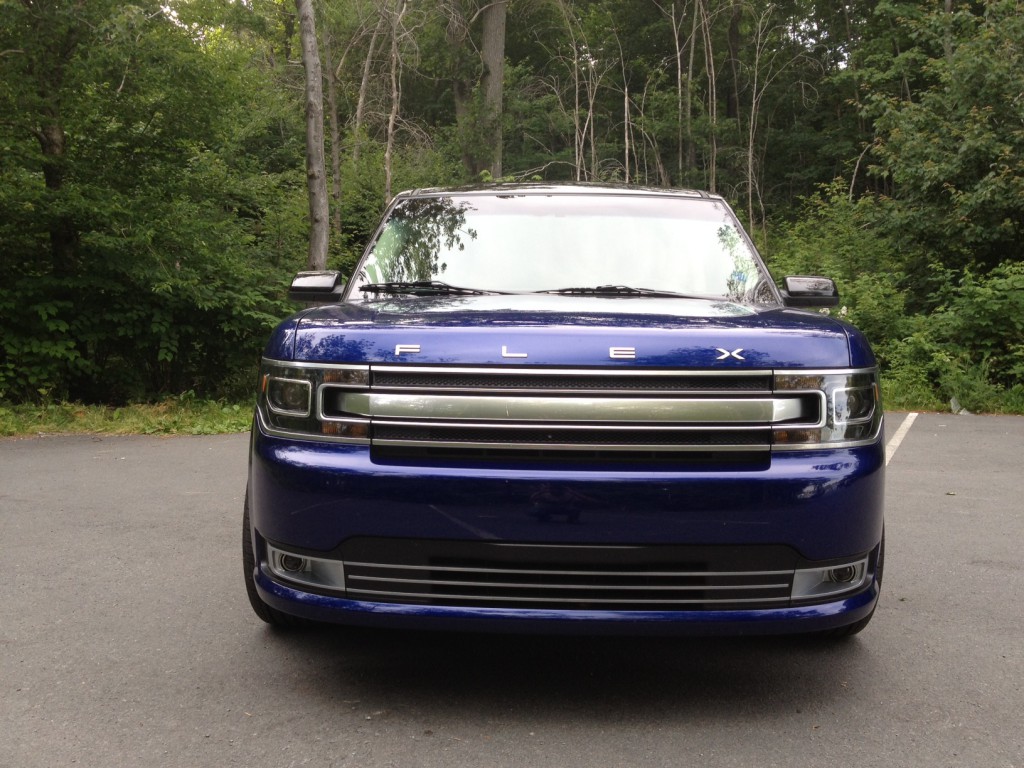 Ford seemingly conceived the idea of the Flex by using an etch a sketch. It’s long, boxy and has a low roofline.  The redesigned front fascia takes on a Transformer type of look with a large bar that spans across the grille and integrates with the headlights, which are small projector beams partially hidden from certain angles. Optional 20 inch wheels help the Flex stick out a bit more, although admittedly, considering the Flex’s large size, they appear to look a bit smaller like 18’s. In the rear, not much has changed from the previous generation with LED tail lights, a brushed aluminum tailgate and dual exhaust. The black roof is optional and certainly completes the sporty look. I must say that it looks much better than the typical white roof, which I always considered to be a rip-off of the Mini Cooper anyway. I must admit that the Flex’s styling never swayed my opinion either way to yay or nay, however near the end of my time with the Flex I thought it to be a unique and agreeable design. 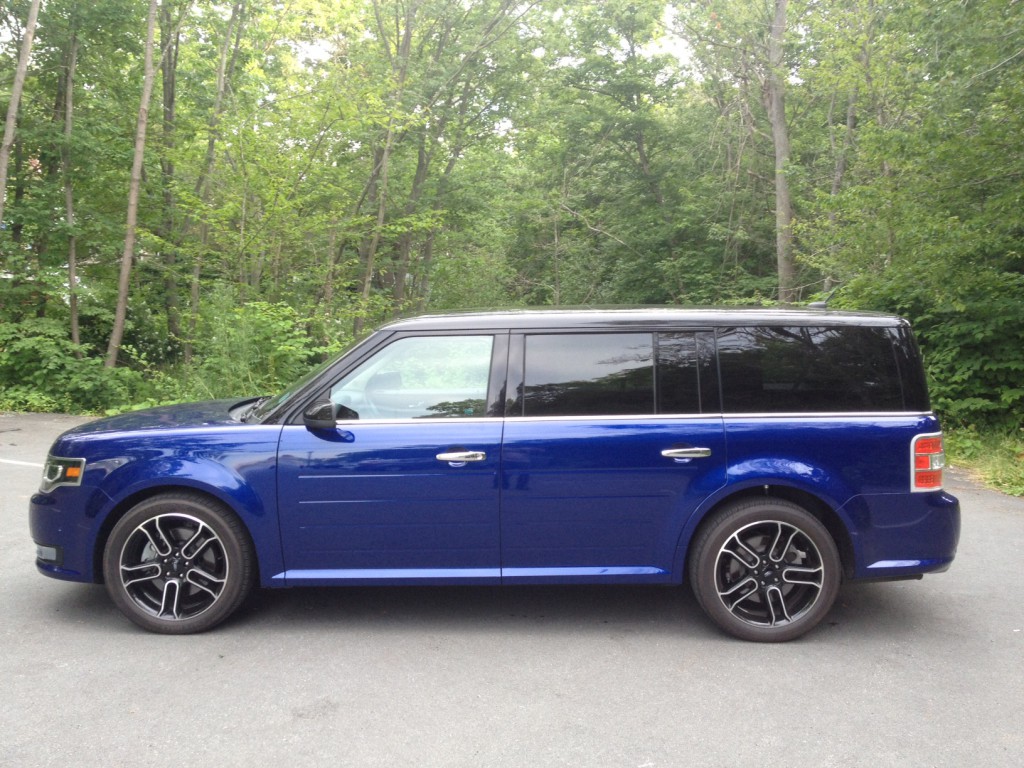 The interior is quite nice with leather seats and quality materials throughout. The centre stack has no buttons at all, just tap on the surface to indicate what you want to happen. While this eliminates any cheap button clicking sounds, it also sometimes requires you to hit the surface several times to get it to respond to commands. Ditto for the large touchscreen, which makes images quite clear including the rear back up camera. Access to the third row seating is a bit of a challenge with second row seats that take some effort to fold, but once back there, anyone could be comfortable in the third row for moderately long trips. That third row was quite manageable thanks to the optional electric folding abilities. At the touch of a button the seats transform themselves into the floor in just a few seconds for a flat load bay. Alternatively, they can flip backwards should a random tailgate party break out. My tester also came with an optional cooler which I was not able to try, but I did stick my hand in to confirm that yes, it does indeed get quite cold. Whether or not this feature is worth $650 is another thing altogether. 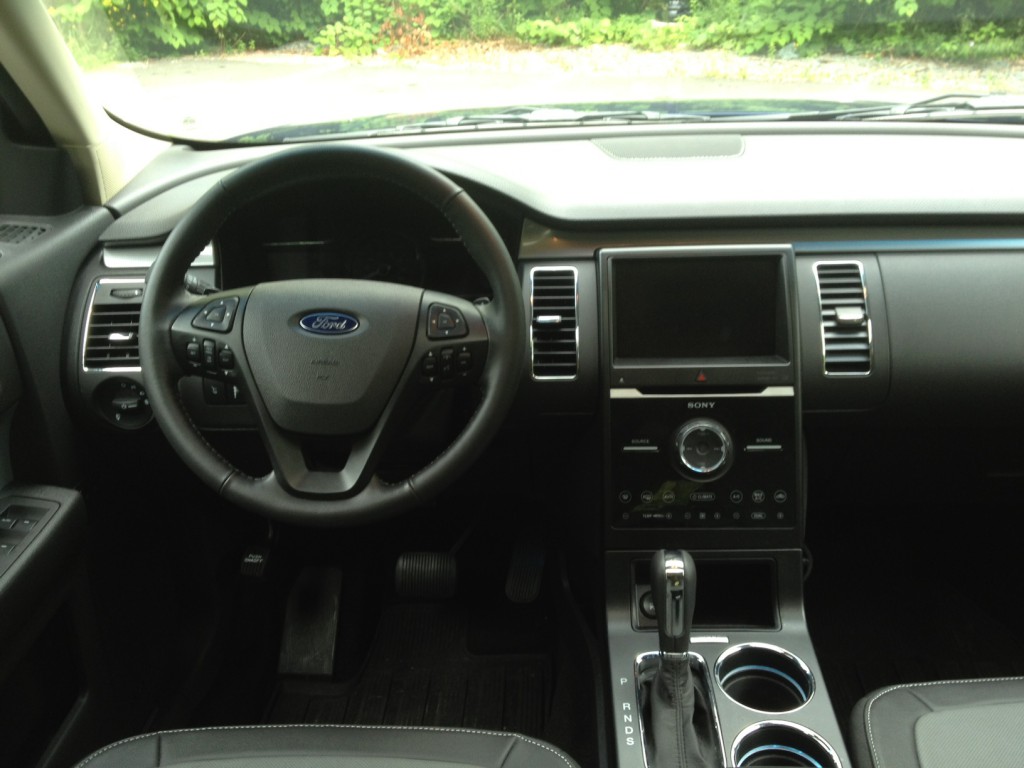 My tester came with Ford’s 3.5 L EcoBoost V6 twin-turbocharged, direct-injection engine. This engine supposedly gives the power and performance of a V8 all while achieving fuel efficiency of a V6. And with 365 hp and 350 lb.-ft. of torque it definitely felt like a V8. It’s got more than enough pull considering the Flex’s size and weight. Fuel efficiency numbers are decent as well, however they take an obvious dip when the A/C is on along with that cooler in the second row. Listen closely and you can hear a decent sounding exhaust note when pushed. The automatic transmission, bucking the trend, does not immediately seemed geared toward fuel efficiency. In first and second gear it will rev up to 3,500 RPM before upshifting. This allowed for a slight engine noise to enter the cabin. 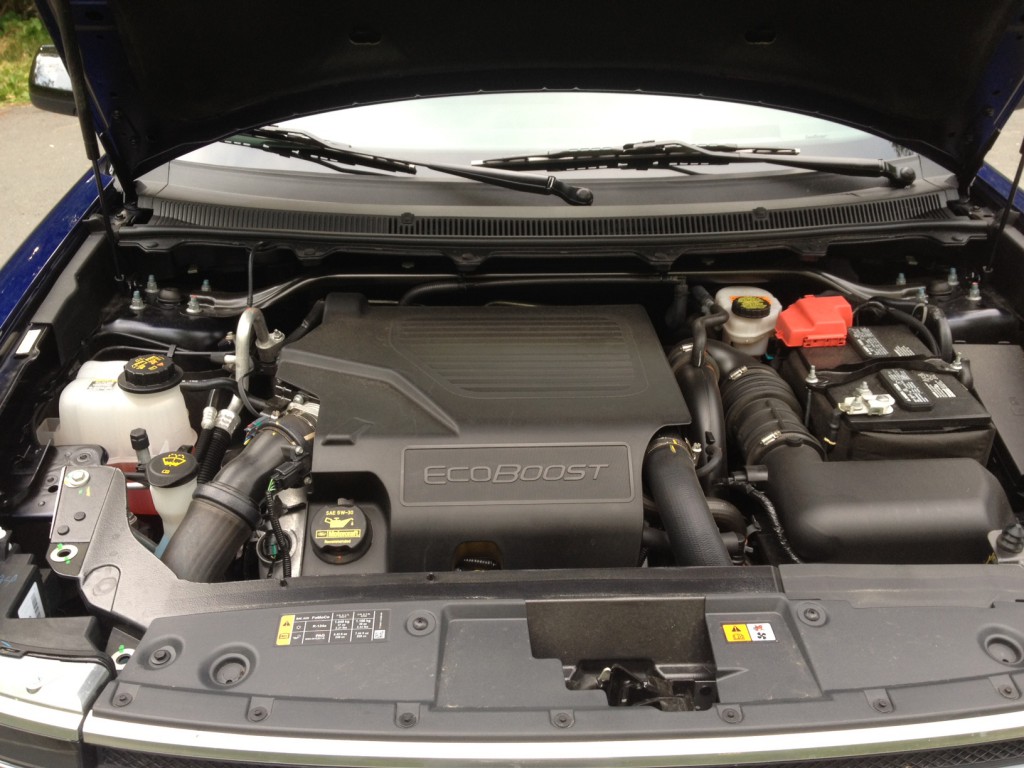 The Flex feels decently stable on the highway with slight wind noise which could be attributed to that boxy shape. Around town the Flex is surprisingly maneuverable considering its size and as a result you forget that you’re driving a large crossover. But just in case, Ford’s optional back-up camera, sensors and park assist are there for you. I had the opportunity to try out Ford’s self-parking system. The system essentially helps the driver to parallel park. Once you pull up to a space, hit the auto-park feature and the sensors will scan for an available space. Unfortunately half the time it seemed as if the sensor couldn’t find anything, when there was clearly a large space available, as it would scan for an unreasonable amount of time. All the while you are blocking traffic behind you. Eventually this just embarrasses you to just park the car yourself. I maintain that if anyone is not able to parallel park a vehicle themselves, then they shouldn’t be driving after all. However, on less busy residential streets, I was able to give the system a proper go. Once the spot is detected all the driver needs to do is put it in reverse, operate the gas and brakes (and of course check the surroundings) and voila, the Flex generates its own personality and parks itself. In fact, despite my feeling that systems like these are needless, the whole process is kind of cool. One issue is that the Flex seems to base how it parks itself on the vehicle behind you. It aligns itself up with it. So if the vehicle behind you parked crooked or too close/far away from the curb, then the Flex follows suit. 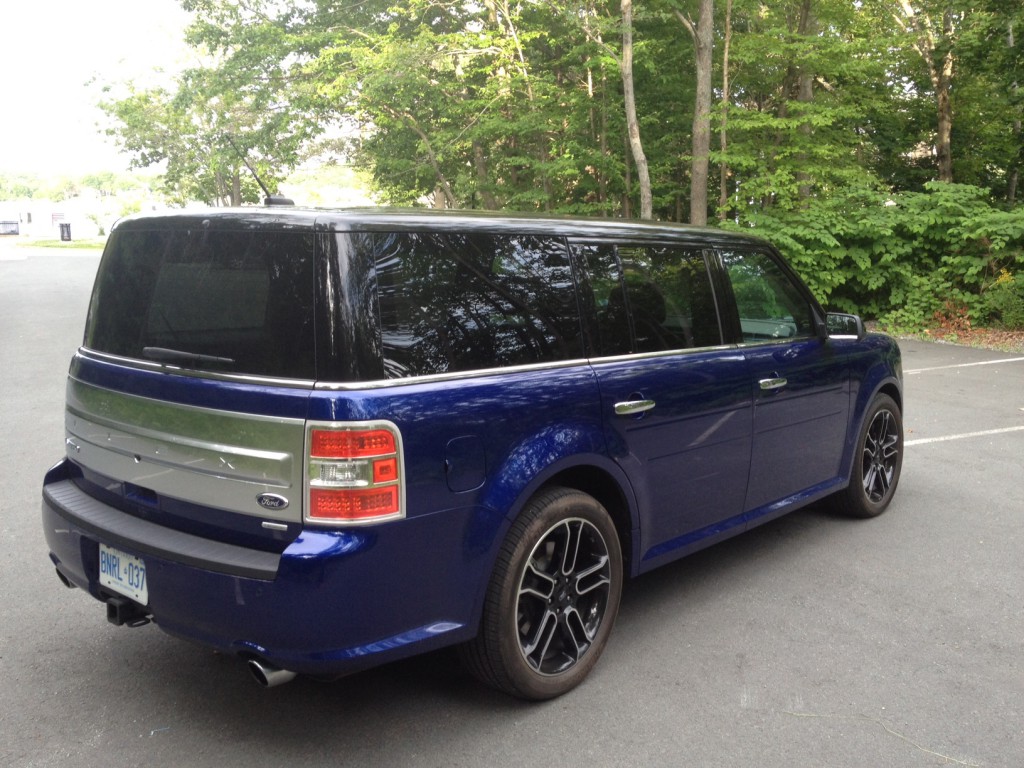 The Flex’s all-wheel drive is meant to add some sure footedness. I actually found that it seemed to cause a bit of over steer during hard cornering. There is also body roll  and the steering becomes quite numb.   This is not a terribly concerning issue however, since hard cornering is not what the Flex is built for.  The AWD likely brings piece of mind in bad weather rather than making the Flex off-road capable. 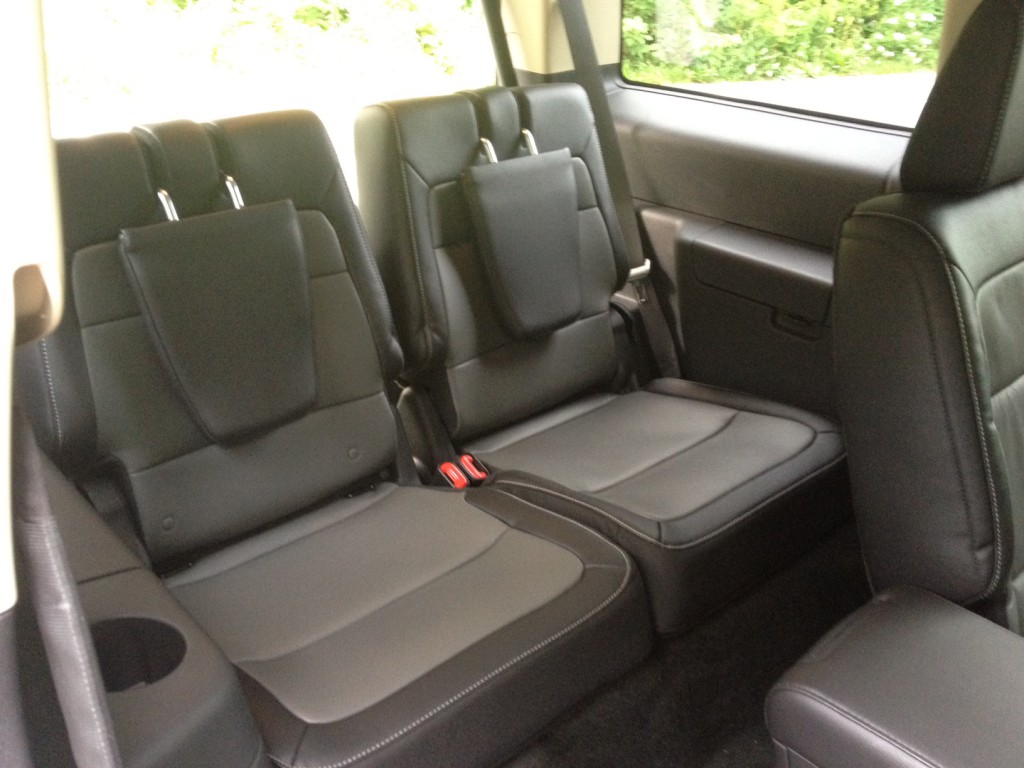 A few annoyances during my time with the Flex:

But as you can plainly see, these issues are minor annoyances because really the Flex actually is quite a decent crossover. While I maintain that the best vehicle to buy for cargo and people carrying space is a minivan, the Flex does indeed make a credible argument for something a little more stylish. It has a certain quirkiness to it that won me over near the end of my time with it. 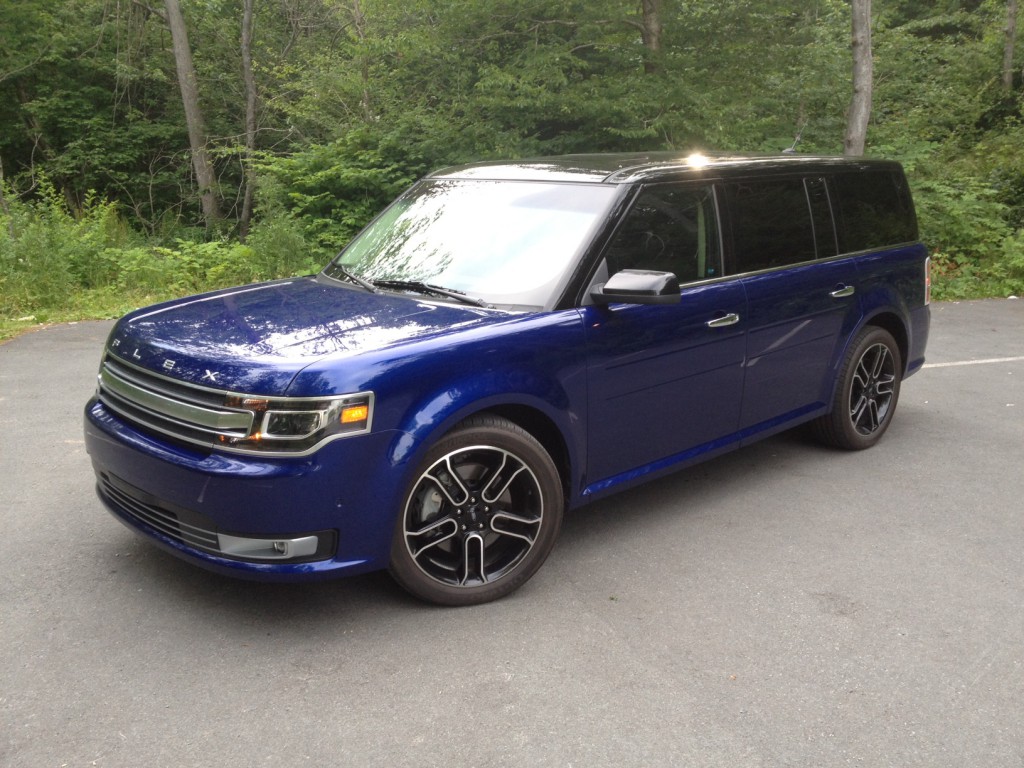 So, is the Flex a legend? No. While it does a lot of things well, it doesn’t have the history, the pedigree or the hype of true car legends. But in a way, using just the Flex name could make it well on its way to become one. It does, afterall, have the most unique styling in the segment and the most modern technology in the segment. In a few years time it’s very possible that the Flex name will no longer be associated with Funkmaster or Farley, but it will be associated with Ford. And if that happens, it’s mission accomplished for the blue oval.