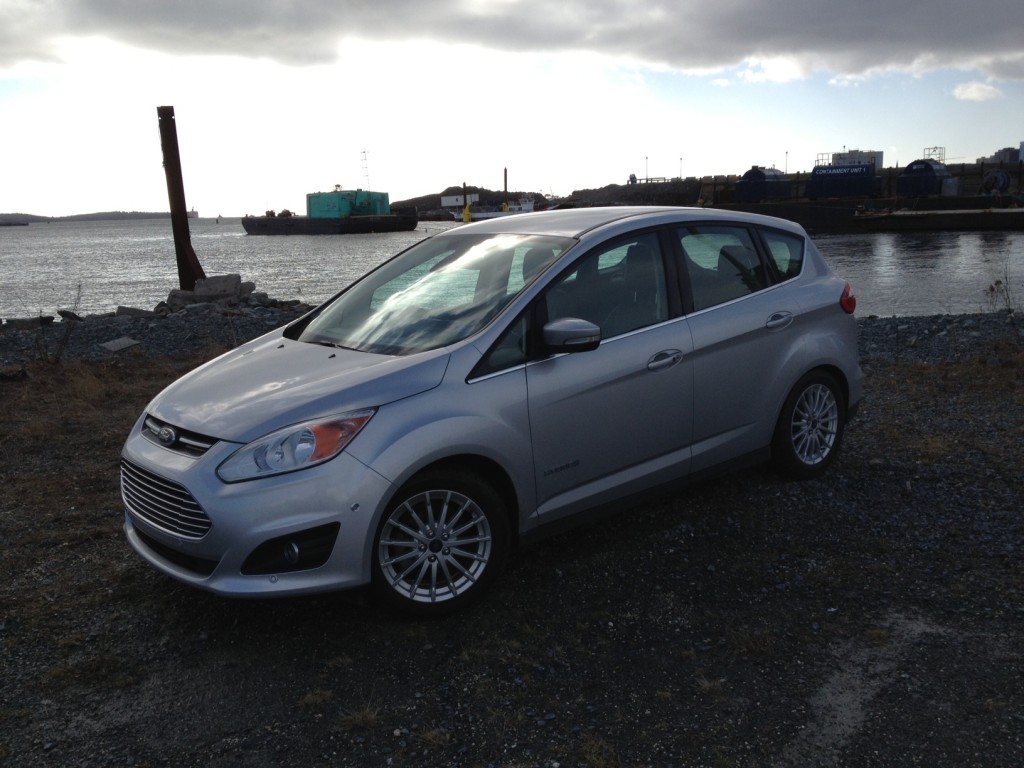 On occasion, I get asked to do local radio to talk cars as the local car expert. I love it because cars are one of the few things I know best. And getting the opportunity to gush on and on about them is a bit like being given the keys to a Ferrari 458 Italia and then being told “okay go”.

But since the audience isn’t necessarily into cars, I get asked a lot of basic questions about them and about the car companies themselves. One question I often get asked is “which car company would you say has really stepped up their game?”. That’s an easy one for me because while there is certainly more than one company that comes to mind, I always inevitably answer ‘Ford’.

As little as 10 years ago, Ford was plagued with recalls, an unusual amount of ‘lemons’, and a host of lawsuits. Their product was sub-par, generic, unreliable and unsafe. And in that short amount of time Ford is easily near the top for innovation, quality, style, safety and performance. And they did it all themselves, no public money used. What was their secret? Well it was so simple and blatant that Ford must be embarrassed that they never thought of it before: offer your product globally.

It’s simple. Everyone gets the same product, and therefore every product gets held to the same standard. As a result, we now get a host of vehicles we never did before such as the Fiesta and the C-MAX.

The C-MAX was first introduced in Europe as an MPV (that’s multi-purpose vehicle in English). Now thanks to the new ‘Fords for all’ strategy, we now have our hands on the new generation, which, for North Americans, is an all-hybrid lineup aimed directly at Toyota’s Prius lineup.

The Prius name is synonymous with hybrid. It single handedly created and then revolutionized the segment. That means going up against it is a very tough task. Is the C-MAX worthy enough? 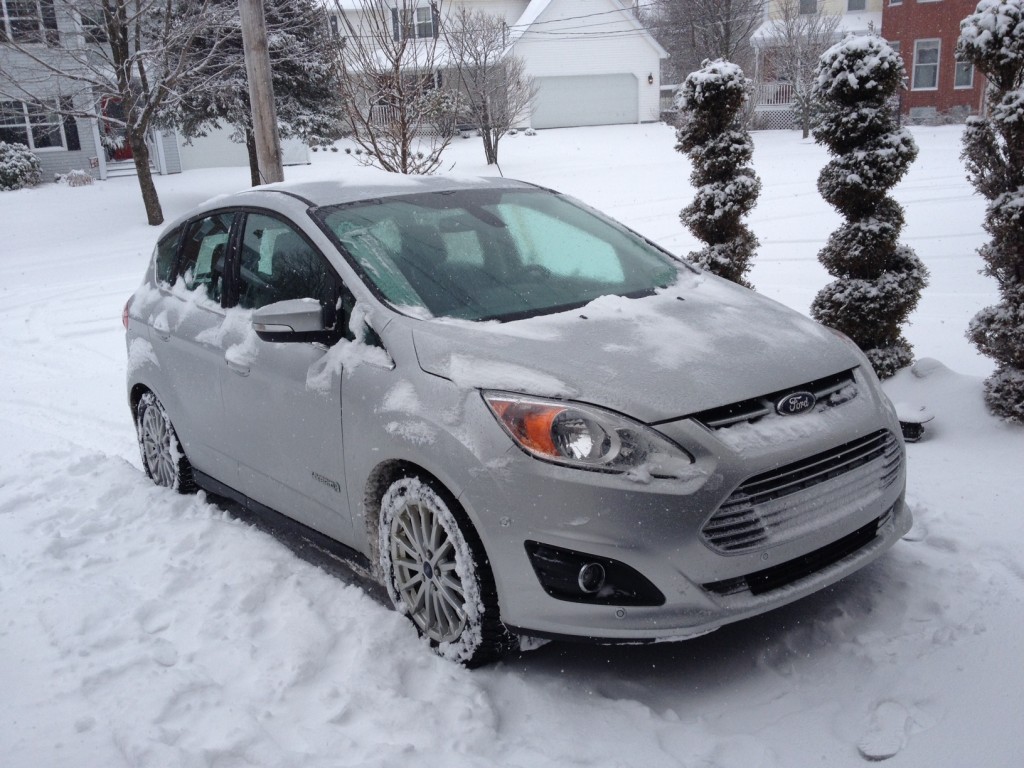 When designing a hybrid, there must be recording that gets played in the lab that says the word “awkward” on a loop. Every time someone comes out with a new hybrid, the design is far from attractive. It either looks straight up ugly, or at the very best, awkward looking. The C-MAX certainly delivers on the latter. The shape makes it seems like a bloated Focus and that front fascia with three different sets of grills seems both distracting and unnecessary. I get that the C-MAX is based on an MPV, but an MPV, by nature should be multi-purpose as in more than just standard seating. The C-MAX seems to look awkward for the sake of looking awkward. 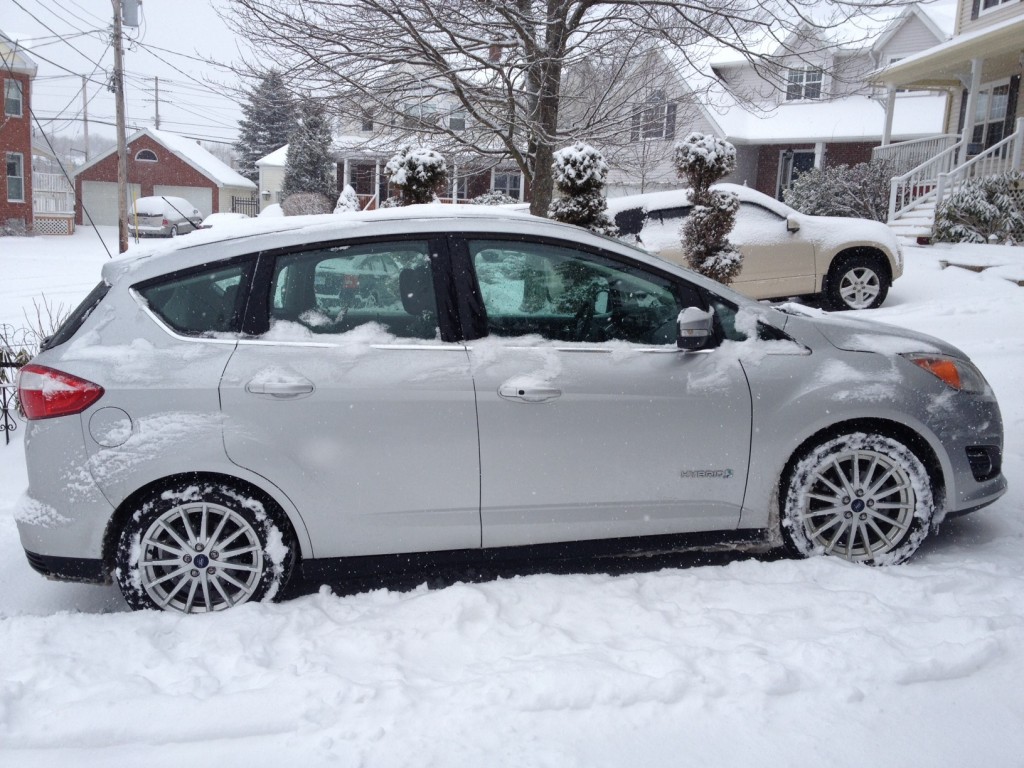 One thing that the awkwardness does provide, however, is an insane amount of headroom inside. I don’t think it’s possible to find anyone who would not fit comfortably inside, including Shaq. The generous headroom is matched with decent rear leg  room. On top of that, entry and egress is quite easily due to a wide door opening. Cargo room is good too. With the seats folded 60/40 there is about 52 cubic feet. Yes, you read that correctly, you can indeed fold the seats. That’s because the battery pack is actually located underneath the car rather than between the seats like in other hybrids. Accessing the cargo area is quite easy as Ford has put their new hands-free system in the C-MAX. With one kicking motion under the rear bumper, the hatch will automatically open by itself, keeping you from spilling your groceries everywhere while trying to get to the key in your pocket. The system is quite neat although you may look quite odd in parking lots with people wondering why you’re kicking your brand new C-MAX. 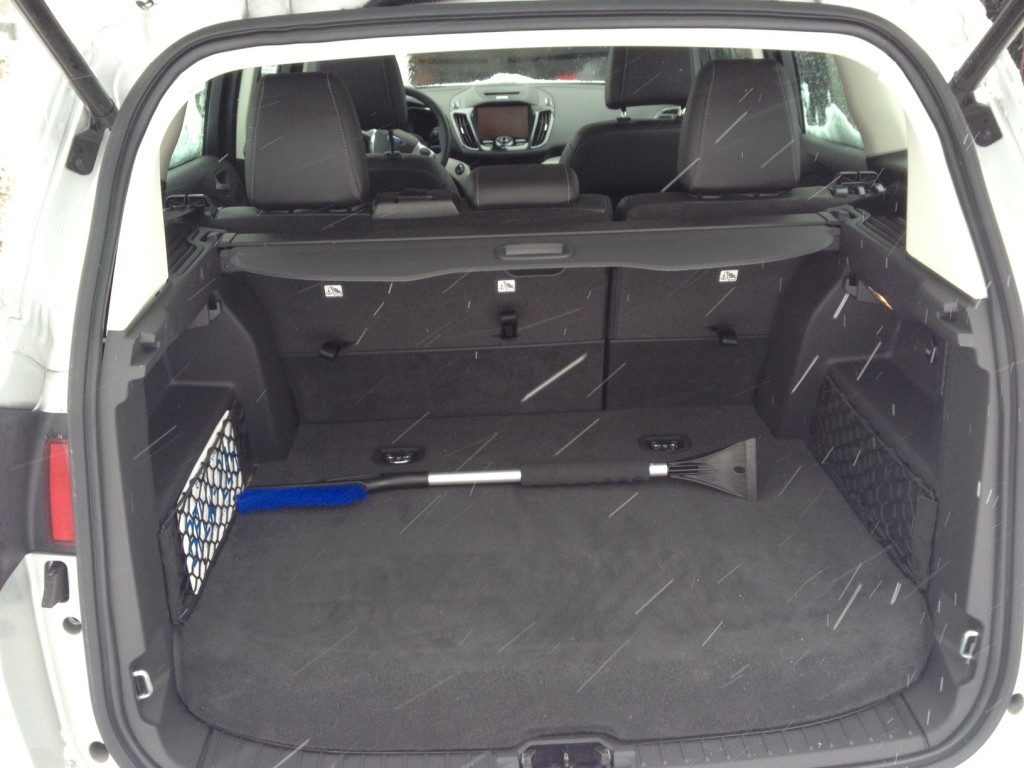 The design of the interior is nice, if a bit overwhelming. It’s certainly a refreshing look over the interior design over some other hybrids, but with a host of buttons on the wheel and an eight-inch display screen divided into four quadrants, it seems a bit like tech overkill. The displays in between the gauges make the cluster seem quite busy overall however when you actually pay attention to what the read outs are saying, you’ll find some interesting info -not least of which is an update on the distance traveled for your trip along with how long it took you and how much gas you used in both volume and dollar figures. In addition, you’ll be rewarded with leaves on the right side of the screen the more efficiently you drive. The more leaves, the kinda you’re being to the environment I suppose. But this method actually works fairly well. It’s human nature to want to be the best at everything so even though most leadfooted driver will be driving for fuel efficiency just to prove he or she can get the most leaves. On top of that, it’s training them how to drive efficiently. 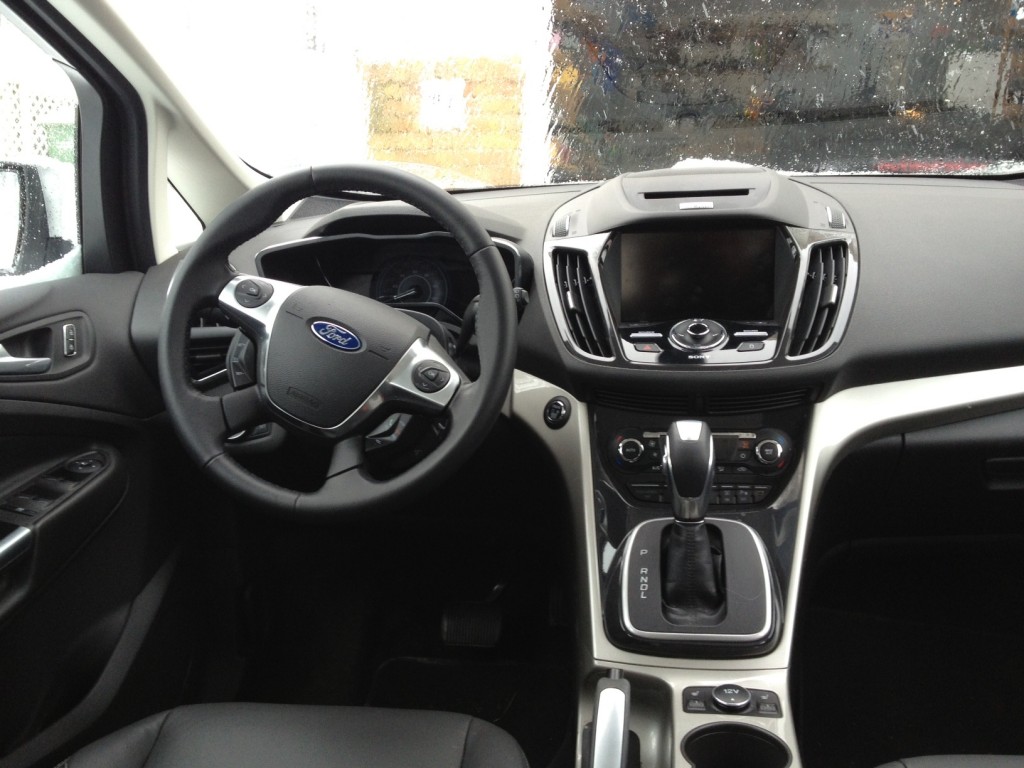 One thing that the C-MAX did was note how efficiently you braked by giving you a percentage. Boy, was it ever tough to brake smoothly and efficiently. Those brakes may have been the touchiest brakes I’ve ever experienced on a press car. As a result, coming to a stop at a stop sign or a red light gracefully is very difficult to do. In my seven days with the C-MAX it wasn’t until the sixth day that I was able to actually brake to a stop normally. I would either inadvertently stop short in a panic stop or I’d overshoot by being a little too light. This was both frustrating and slightly unsafe. 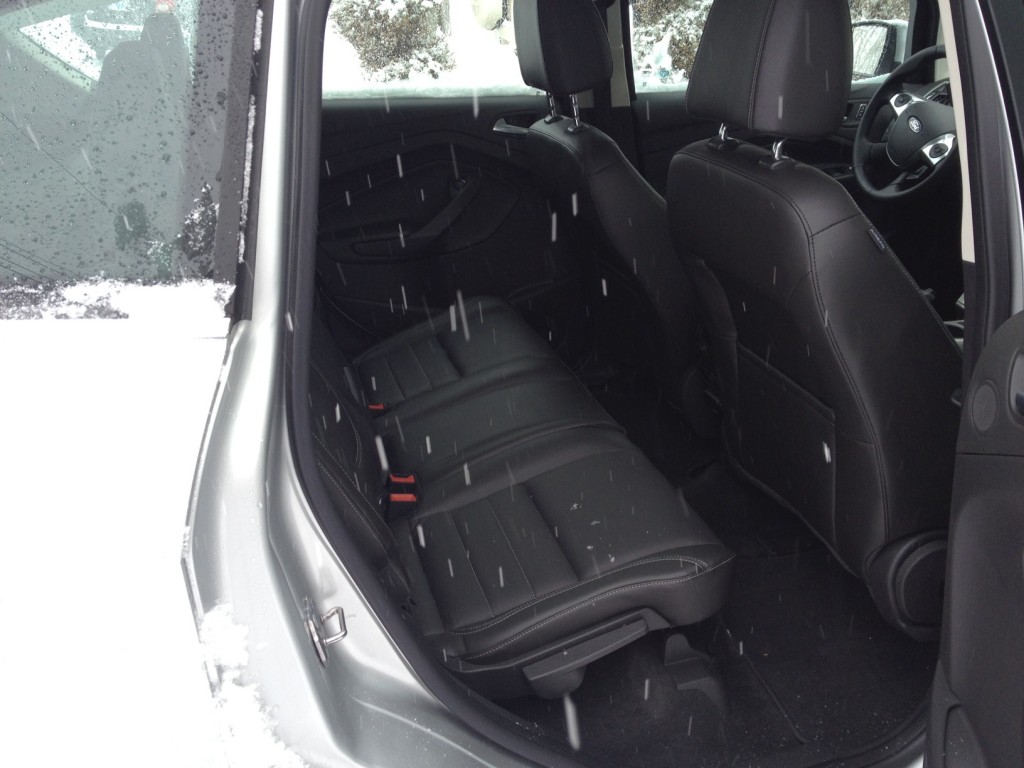 On terms of acceleration the C-MAX does surprisingly well. It won’t blow you away however there is decent pick up when needed such as passing or merging onto the highway. One thing that irritates me about the Prius is the blatant lack of power when you need it. You have to push a button to maximize the power and electric motor. With the C-MAX all you need to do is push the pedal to the floor to tell it you want it to take off. 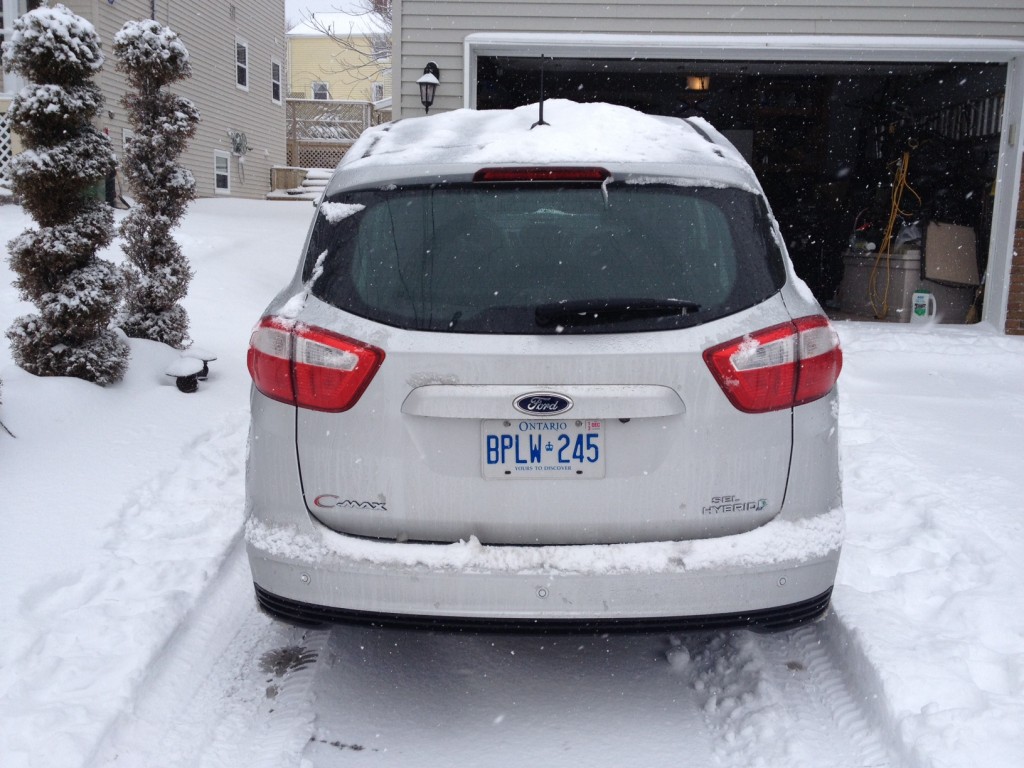 The C-MAX gets a 2.0 litre 4 cylinder engine along with a 1.6 kWh lithium ion battery pack. When matched together at their full potential, they produce a healthy 188 horsepower. It’s matched to a electrically controlled continuously variable transmission (CVT), which by its very nature is droan-y, however I’ve definitely experienced less refined CVT’s before. The C-MAX can cycle through electric power only, to engine power only to a combination of both depending on the road surfaces and speed. 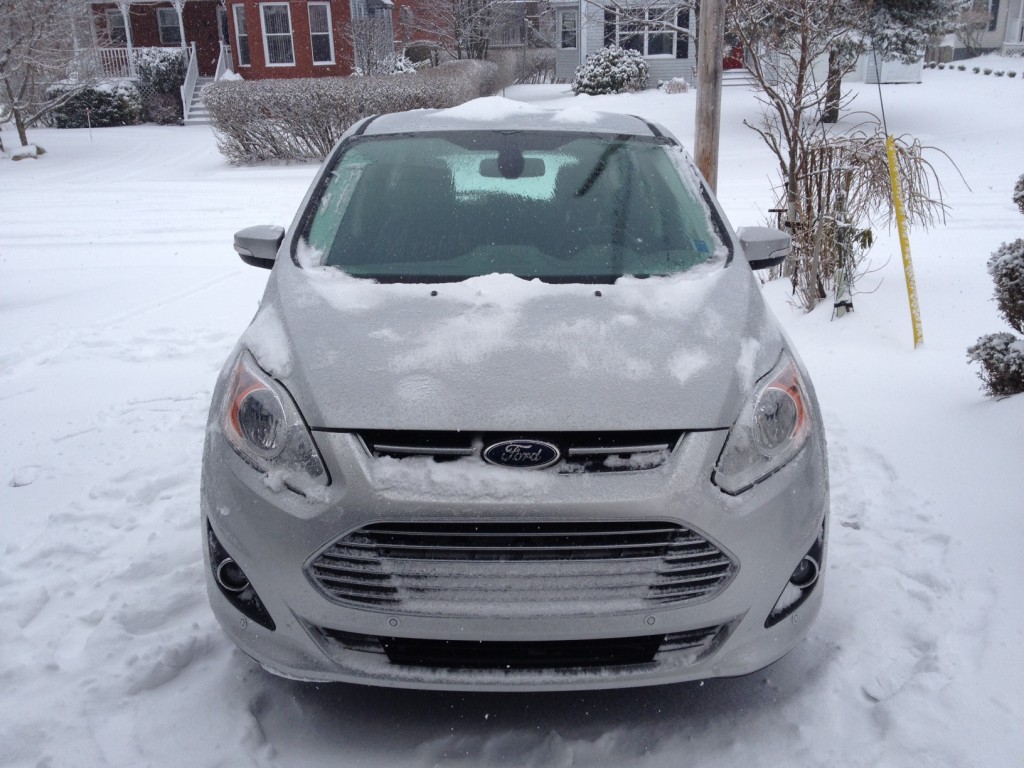 Officially the C-MAX is rated at 4.0 L/100 kms city and 4.1 L/100 kms highway. In a combination of both I averaged 8.1 L/100 kms. That’s double what the stated average is. This has been a contentious issue with the automotive press as most keep reporting that their real world fuel consumption is nowhere near the official numbers. In my case I’d have to agree. However to be fair, I had the C-MAX smack dab in the middle of winter. Cold temperatures matched with way too much snow for this author’s liking (as evidenced in the pictures) means that fuel consumption levels will dip on any vehicle. Still, the level of discrepancy between the numbers is odd and a little concerning. 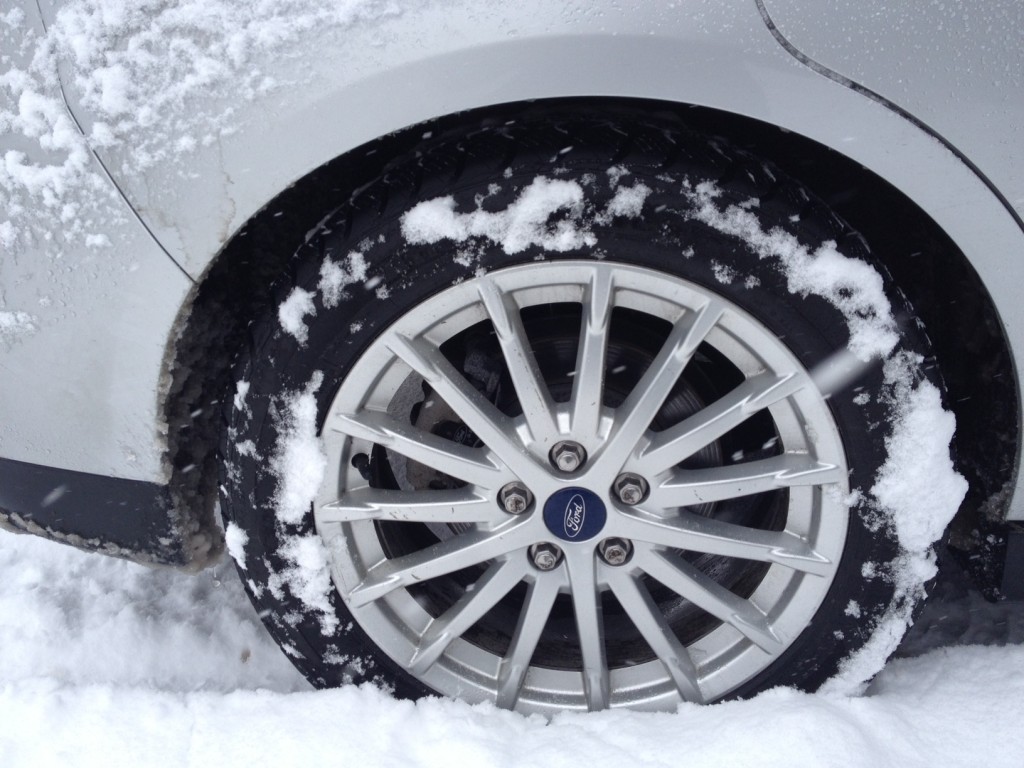 But at the end of the day, it’s definitely safe to say that Ford has come up with something that is both innovative and appealing. Originally I was going to compare it to the Prius, however it isn’t quite a Prius competitor due to its size. What about the larger Prius V you say? Well, it’s actually a bit smaller than the Prius V. It’s right in the middle. And perhaps that was done on purpose on Ford’s part in order to alleviate the inevitable Prius comparos, but one thing is for sure; if you are going to compare it to the Prius, it can certainly make a strong argument for itself. It’s more refined in my mind and is also quicker and roomier to boot. And that’s something you couldn’t say about any Ford product ten years ago, especially when comparing to a Toyota product.

The C-MAX is certainly worthy to roll with the big boys of the hybrid segment. 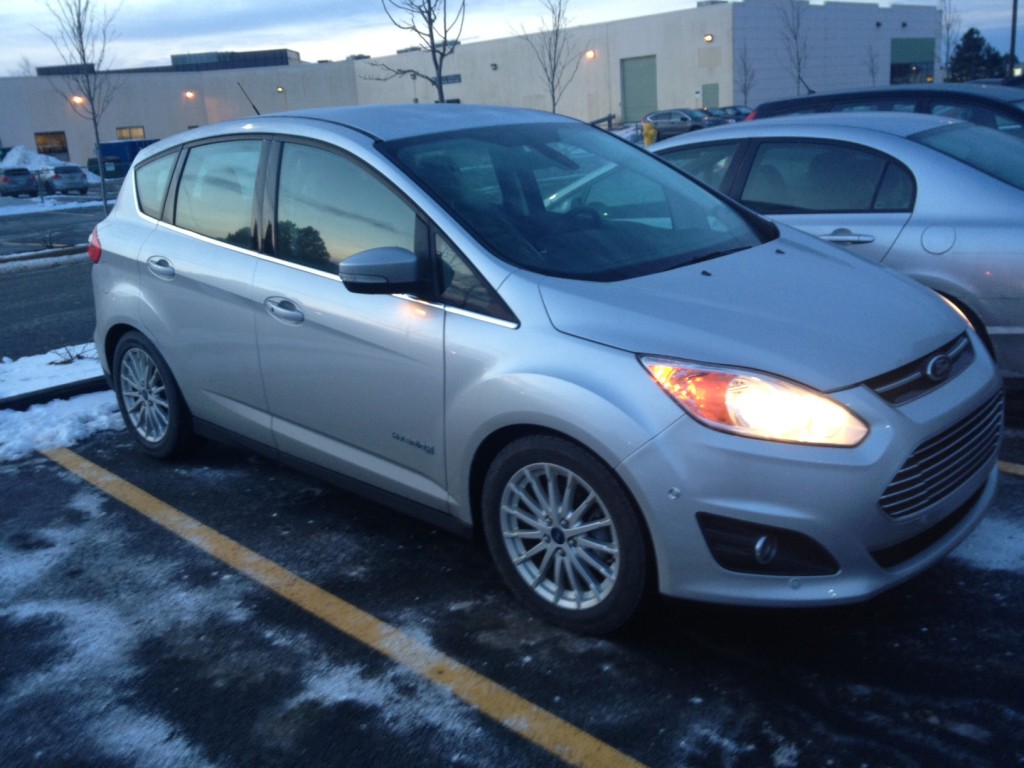