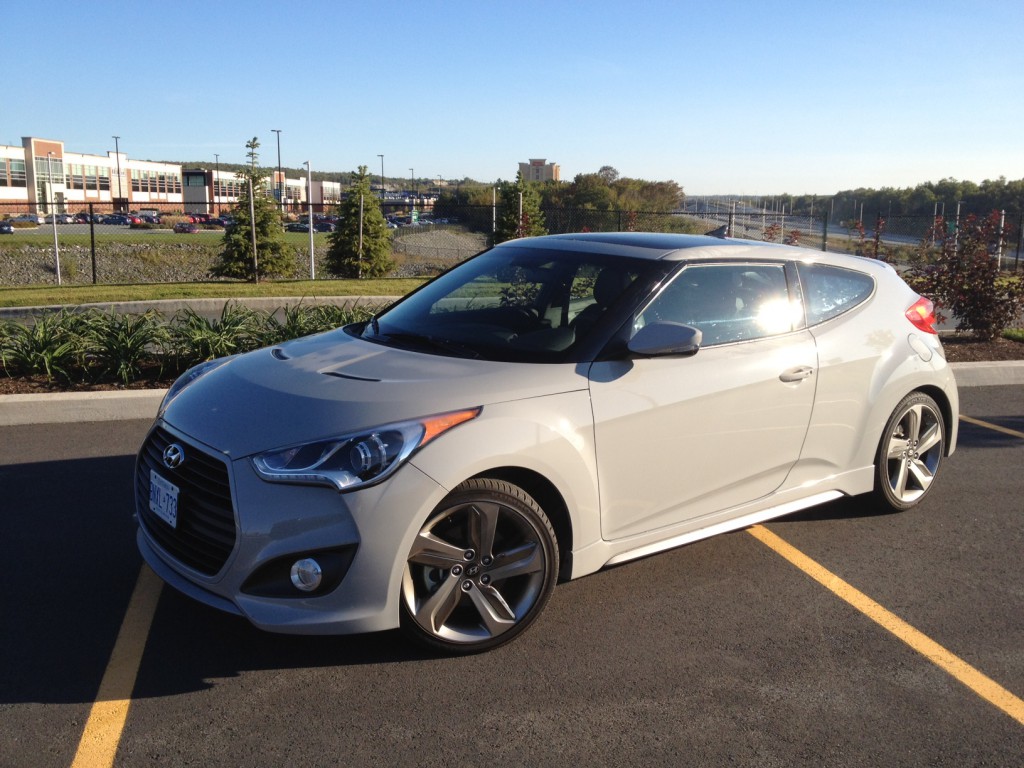 Politics, no matter which sort, has always peaked my interest. There’s something about politics that is so genuinely appealing. Having two or more opposing opinions duke it out (dictatorships not withstanding) for the good of a group, community or nation is fascinating because inevitbly you end up seeing or hearing points of view you may not have otherwise considered. Sometimes politics can head unexpected or questionable results (see Bush vs. Gore in 2000).

But politics can mean more than simple governing and opposing bodies. There’s politics in everything we do. There’s politics in almost every industry. The automotive industry is no stranger to politics. It can be as controversial as automotive companies asking for government money to just plain and simple vehicle design. In regards to the latter, almost every automaker has experienced controversy in their corporate designs:

Lately, Hyundai’s designs have been garnering attention. The conclusion of its corporate designs are fairly unanimous: they look damn good. However there’s a bit of an issue with that. Just like having non-offensive, non-memorable designs can hurt a manufacturer’s image, having a gorgeous looking line-up while being a volume seller means that people get used to those designs rather quickly since they see them on every corner, and eventually become used to them. While that’s good news for the brand’s sales, it can be bad news for the brand’s image.

So, what to do when such a thing occurs? Create the automotive equivalent of a controversial bill in parliament to garner some attention. In other words, create the Veloster Turbo.

I’ve had plenty of press cars, but never have I ever had a press car that created such a stir of debate as to whether or not it was good looking or ugly. My very non-scientfic poll on Car Driven’s Facebook page (which you should ‘like’ if you haven’t already done so) would seem to suggest that this design is very much a miss for Hyundai. However, ask people in person and they are more likely to find it agreeable. The stalemate is still there.

But like a lot of situations in politics, it seems we’re missing the main point when talking about this car. The big thing about this car is an injection of desperately needed power. Does the Veloster Turbo deliver? 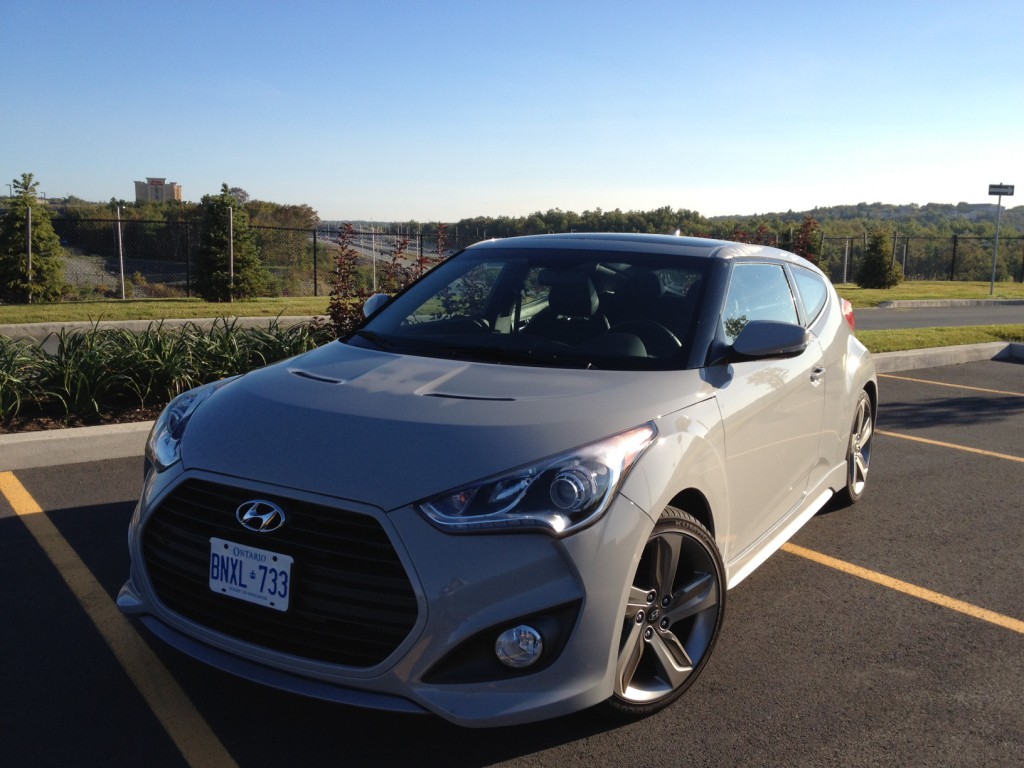 Okay okay. I can’t just let the exterior styling debate go like that. I’m going to have to offer my opinion on this very subjective matter. It’s over the top. I’m going to stop short of calling it ugly, but it’s definitely over the top. The regular Veloster’s styling was too much for me with its asymmetrical design, low slanted roof and a rear windshield that has less room than sardines in a can. I never liked the design of the Veloster. This one just plain beefs up a design that definitely does not need beefing up in the first place. I will concede, however, that the front fascia of the Turbo is actually better looking than the regular Veloster. The gaping grille is a bit much, but overall I find it to be a cleaner design. The Turbo adds LED lights up front which, for some reason, are not the daytime running lights. The Veloster Turbo has projector-style headlights and at night, the different colours in the headlight cluster look odd. Out back, there’s that tiny rear window coupled with bulges over the rear wheels, circular reflectors that look like those seen on country roads and two massive exhausts in the centre which seem like they should be able to wake up Japan with just one rev, when in reality the exhaust note would barely startle your neighbour’s cat. So it’s clear that this car’s immature look just isn’t for me, however, as mentioned, it does seem to work for some people and here I am 650 words into this review and we’re still on the styling. One of the first rules in politics is to get everyone’s attention. That’s playing some good politics so kudos to Hyundai for at least bringing some life into an otherwise boring cloned styled market. 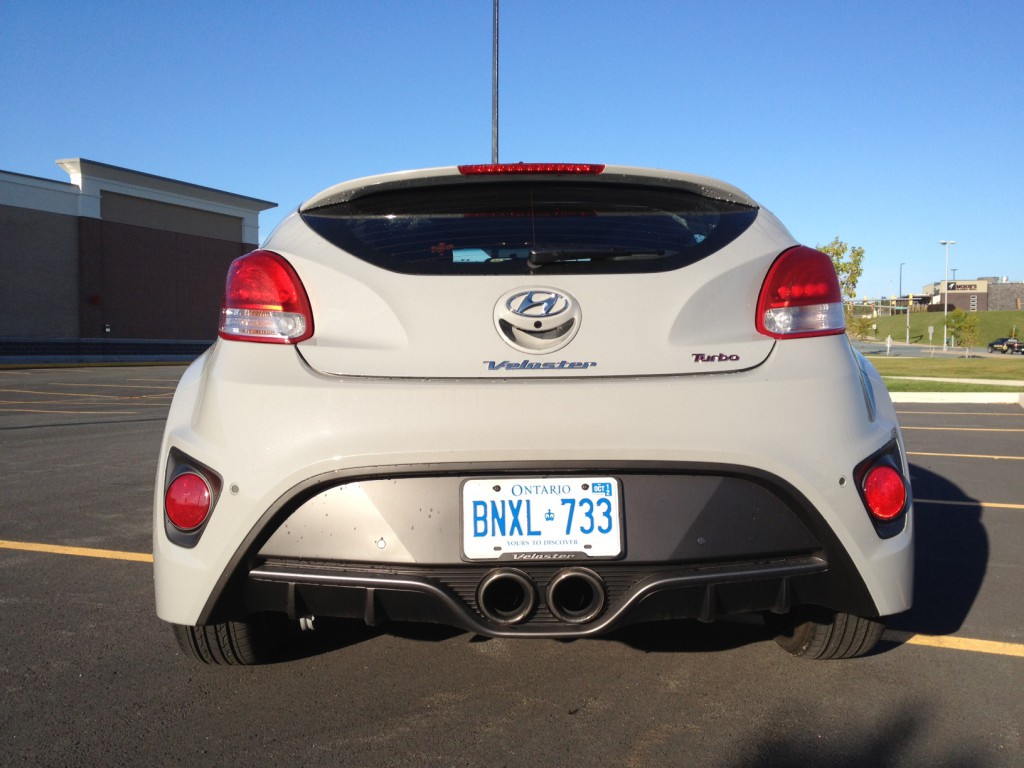 The regular Veloster is accused of being all show and no go and while I have never driven a regular Veloster, its 138 horsepower would seem to suggest that there is some truth to that. The Turbo, on the other hand, bumps that number up to 201 horsepower and 195 pound foot torque. It would be inaccurate to call it underpowered, but also inaccurate to call it fast too. While the added power is very much welcomed over the non-turbo’d Veloster, it still isn’t quite there yet. It’s a bit like the Civic Si in this regard, where the driver is left wanting just a little bit more oomph no matter how hard you push it. Like most turbos there is a bit of a lag while the turbo spools up. 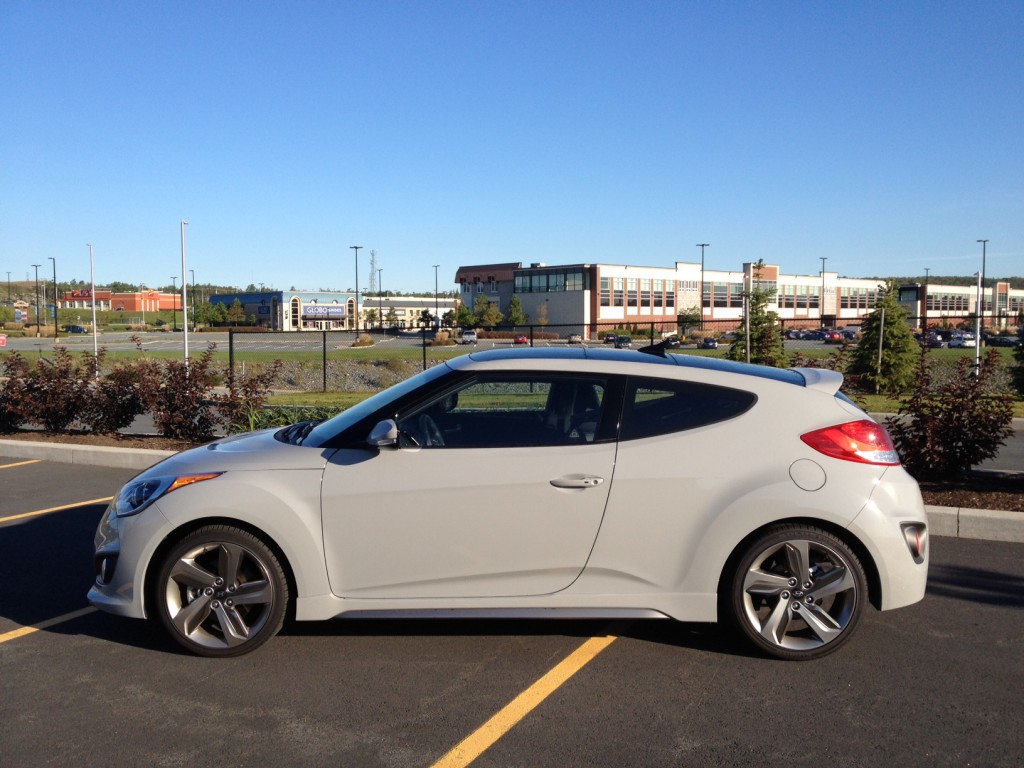 Probably my favourite thing about the Veloster Turbo is its gearbox. I have criticized Hyundai’s gearbox in both the previous generation and current generation Genesis coupe for being unrefined and clunky but this gearbox clearly demonstrates that Hynudai knows how to make a proper six-speed manual gearbox. The throws are short and effortless. While they fall a bit short of being direct, it’s good to know that Hyundai is paying attention to such details which are important if you’re going to make any sort of performance oriented car. In sixth gear, the Veloster Turbo is still able to accelerate with enough gusto on the highway, elimnating the need for downshifting and effectively keeping fuel consumption down. 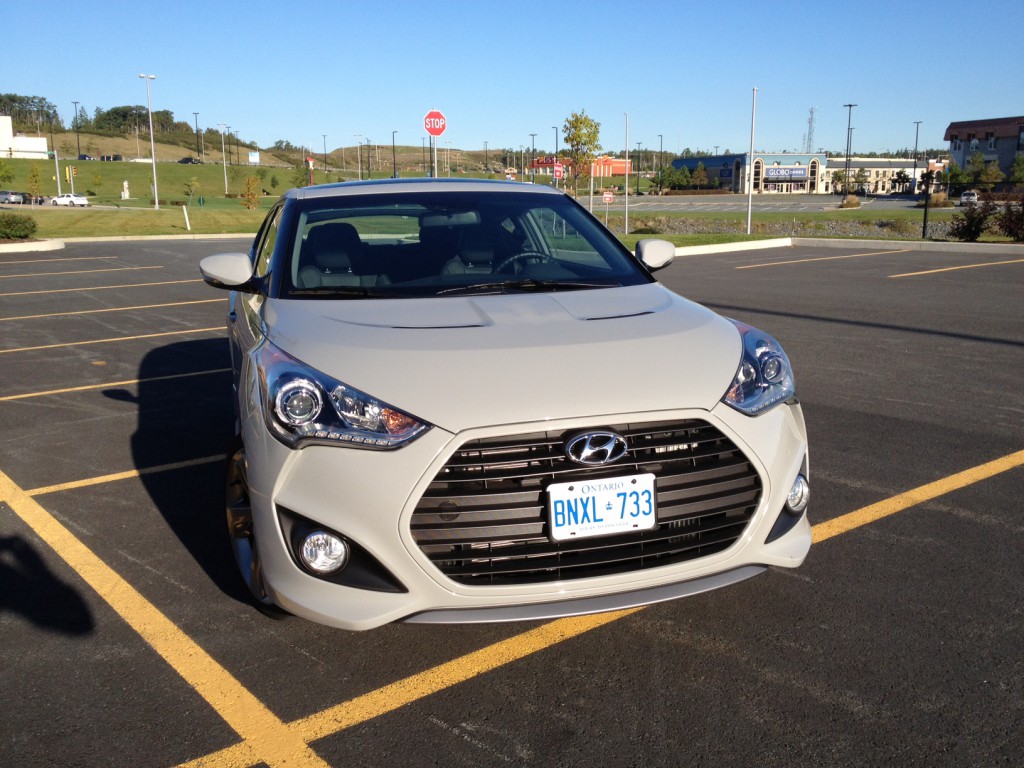 Inside the Turbo is exceptionally well equipped, as is the case with most Hyundais and is of course one of the main draws to the brand. The value is undeniable for tech goodies such as satellite radio, bluetooth, backup camera and navigation which, unlike most press vehicles I’ve experienced, is very easy to use. The Veloster Turbo also comes with smart key integration, a panoramic sunroof (which opens and closes unusually quickly), leather seats (which are unfortunately spoiled by having the word ‘turbo’ stitched into them) and heated seats. The grips traditionally found above the door frame on most vehicles is actually located on the inside door sill which a friend commented that he like a lot better however I felt that they intruded to the window and side mirror controls. The third door is a head scratcher for me, I’m not quite sure why there couldn’t be a matching door on the other side, but Hyundai did an excellent job of hiding it as most people thought the Veloster was a two door coupe and were even prepared to call my bluff when I insisted that, yes, there was indeed a rear passenger door. If you are any height above 5 foot 7 then you will smash the side of your head while trying to get in if not careful. Although head room in the rear seat is surprisingly adequate. In addition, there’s more cargo room than the exterior suggests with a nice deep cavernous area with the ability to fold the rear seats 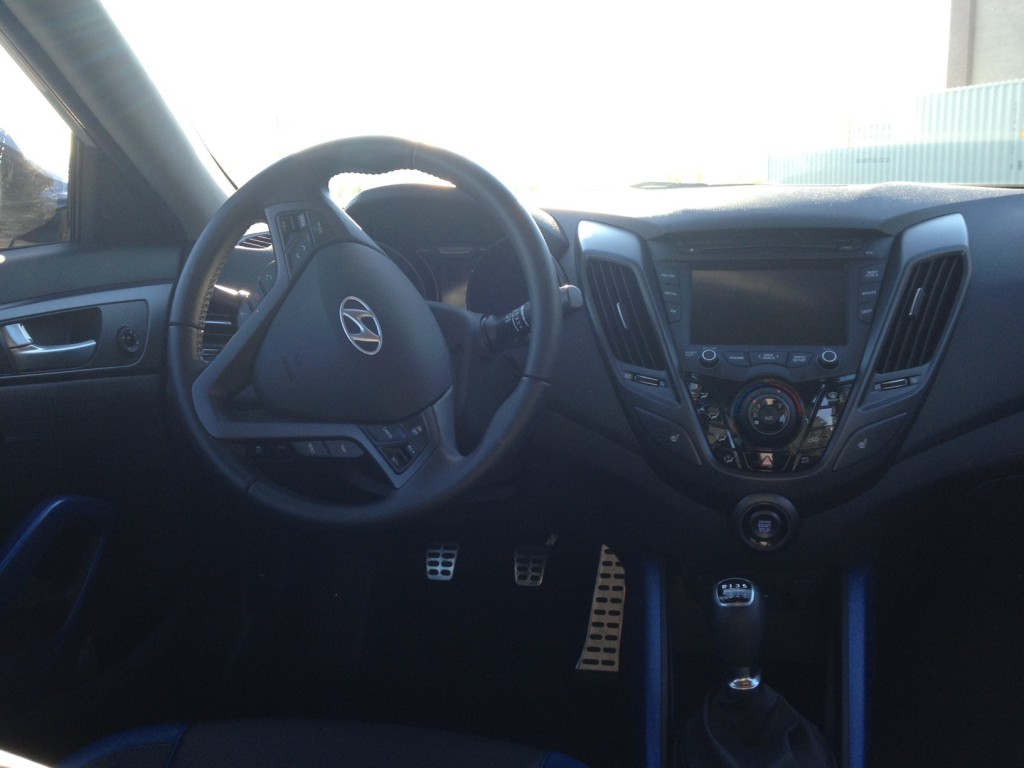 With any hot hatch, the handling abilities are as important as the power output and while Hyundai has addressed the latter, unfortunately they didn’t do such a great job with the suspension. Even though Hyundai gave the Turbo a front and rear sway bar, it feels as though it could get out of sorts at any moment when pushed and understeer very much comes into play. The suspension starts to get wiggly and does not exude confidence to the driver. On top of that, the steering feel is quite bizarre. It’s is if steering feel gets worse as you corner, and it almost feels inconsistent. 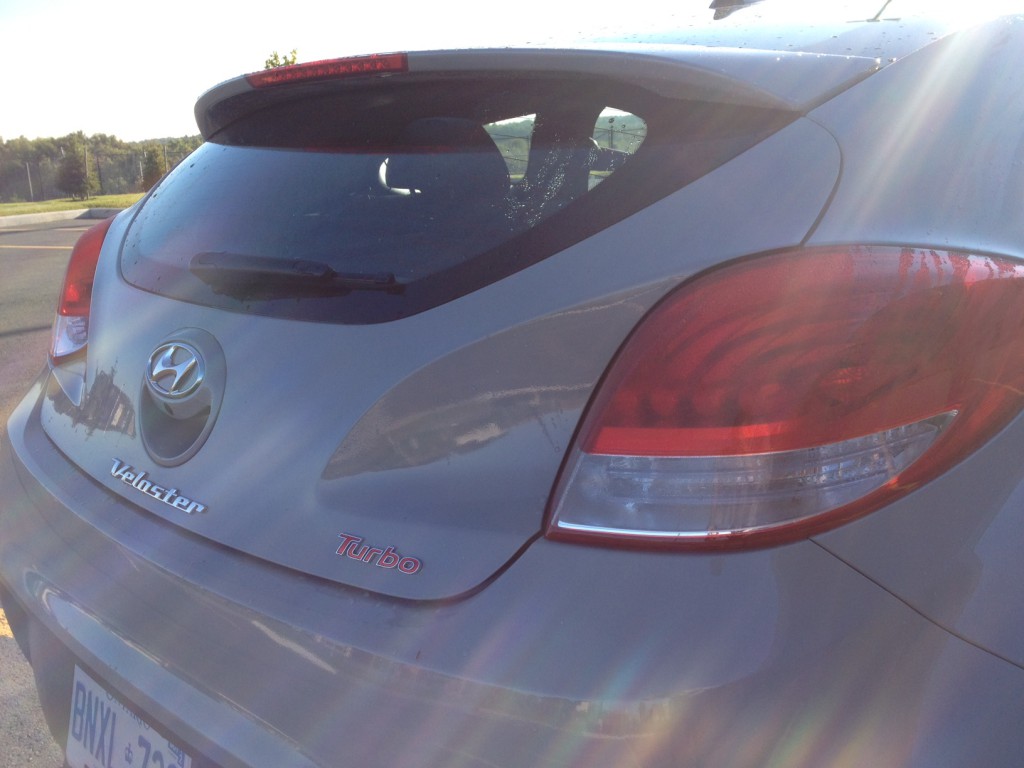 As a result the Veloster Turbo is all show, has some go and that’s about it. If it truly wishes to snag away some potential GTI sales or Civic Si sales, then there’s some work that’s needed to the suspension.

But here’s the thing. This car will sell. Hyundai priced it smack dab in the Civic Si price point and regardless of your thoughts on its exterior style, there’s no denying that it’s more interesting looking than the Si is. However, like politics, the Veloster Turbo is all talk with little result. That’s not to say it’s not a good valued car, it’s one of the cheapest cars you can get with 200 horsepower afterall, but its exterior styling suggests that this car can eat most performance cars for lunch. So the Veloster Turbo isn’t fit to be Prime Minister just yet, but the good news is, with some more time in the market and some tweaks here and there, it could be well on its way.