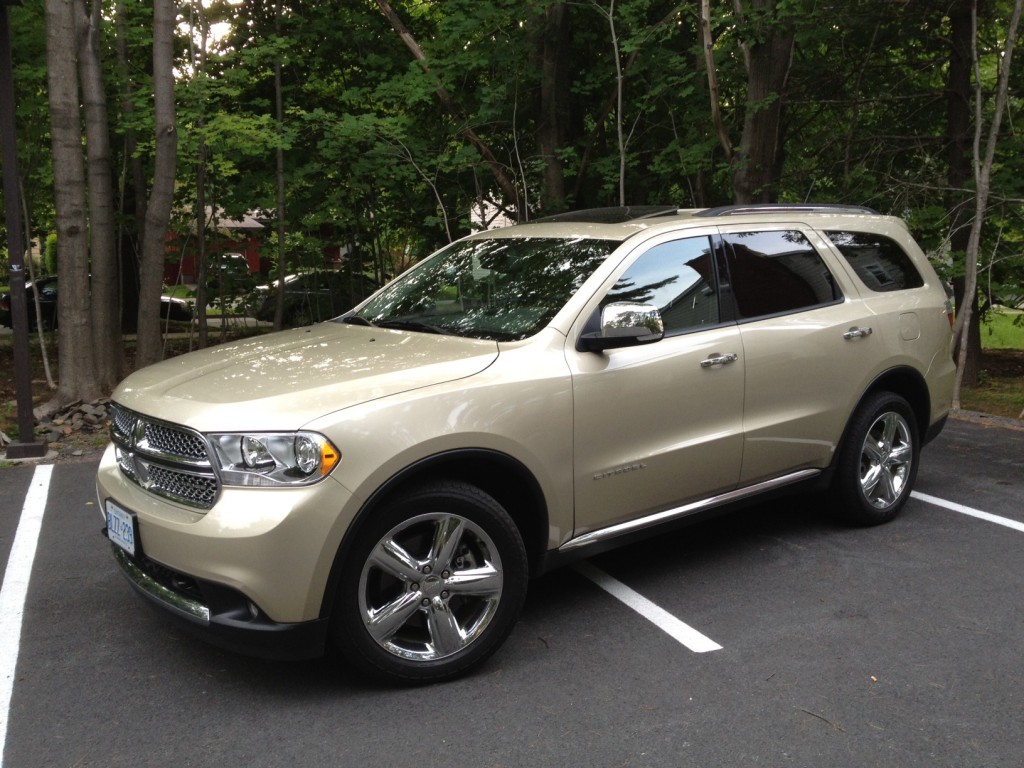 I keep hearing whispers of the new Dodge Durango being labeled as an inexpensive Mercedes-Benz. I suppose it could be possible. This new Durango is built on the same platform of its sibling the Jeep Grand Cherokee, which shares a platform with the Mercedes-Benz ML.

But didn’t Mercedes-Benz and Daimler Chrysler have a messy divorce, you say? Indeed they did and it was actually a long time ago. The thing with vehicle development is that it takes years and years of implementation. So this new Durango for sale today was in the works back when the German-American partnership was shakier than Keannu Reeves’ acting.

The original Durango could only be described as, well, an SUV. That’s the only polite thing I can say about it which is more of a fact than a description. Luxury, refinement, solid-feeling and any other adjective you could use to describe a Mercedes-Benz were far from the old Durango’s reputation.

The new Durango, however, has grown in size to not only fit an extra third row bench seat but also added cargo room. But this new one needs much more than added versatility if it wishes to be named as a credible contender, let alone in the same sentence as a Mercedes-Benz.

I drove one to find out. 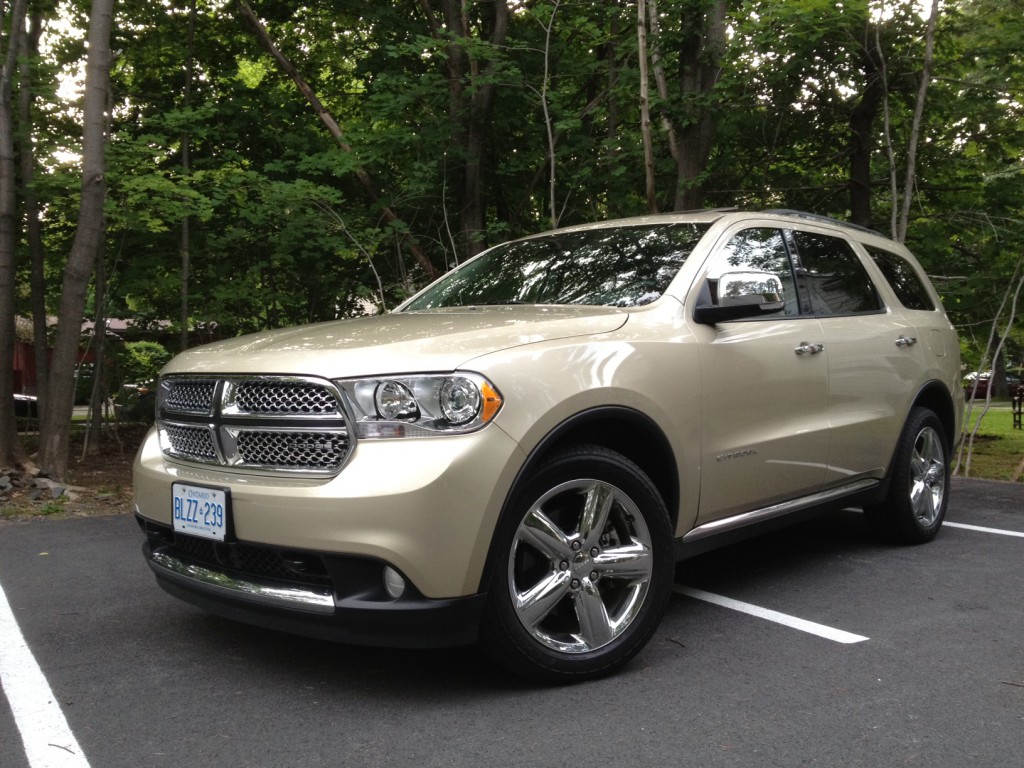 The old Durango was awkward, ugly and tired looking. It was as if Dodge couldn’t be bothered to come up with a decent design (which isn’t hard to do for an SUV by the way, considering the two-box styling) so they just left it the way it was for years. This new Durango on the other hand is so much improved that I would hazard to say it’s now the best looking in the segment. The new Durango’s front fascia is clean, aggressive and modern looking all while keeping the Dodge corporate look in tact. The side profile is sleek and almost wagon-like (which isn’t a bad thing) while the rear is conservative but competent. The Citadel trim level, which is the top of the line trim level, adds 20 inch chrome wheels, unique grille, and Citadel badging throughout. I feel as though the chrome wheels already make it seem dated because chrome wheels are about as cool as CD players these days, but overall the look should be agreeable to most people. 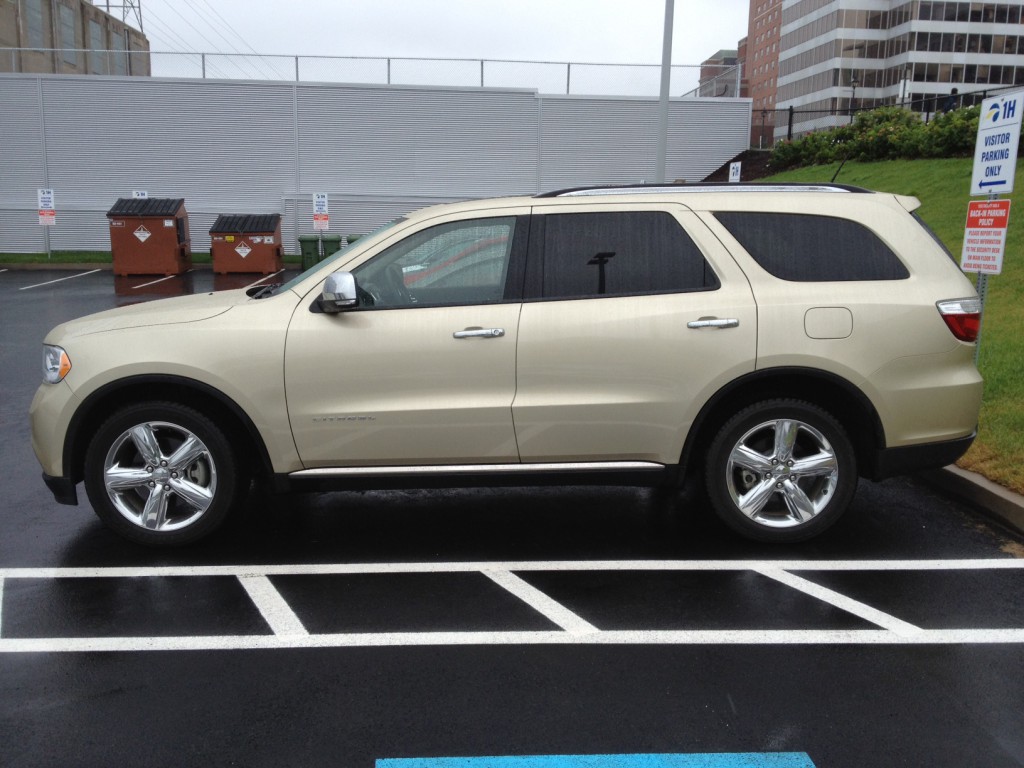 Inside the cabin isn’t exactly Benz-like, but still much improved over the old interior. The new interior features much welcomed high quality soft touch materials where they matter, and a uncomplicated dash and centre stack layout. The latter features a LCD display screen which seemed to work adequately most of the time, my only gripe is that the picture display for the navigation looks as if it was drawn by a 10-year old and on top of that it’s a bit complicated to use. The seats are quite comfortable and the front seats are stitched with ‘Citadel’ into them in case you forgot that you’re driving the top of the line Durango. But along with stitched seats, the Citadel offers lots of interior upgrades that you might indeed find on a Mercedes such as Nappa leather seats with white stitching, the aforementioned premium infotainment and navigation system, push-button start with smart key, audio/video inputs (for game consoles), heated rear seats, remote start system, dual-zone climate control, power sunroof and rear lift-gate. 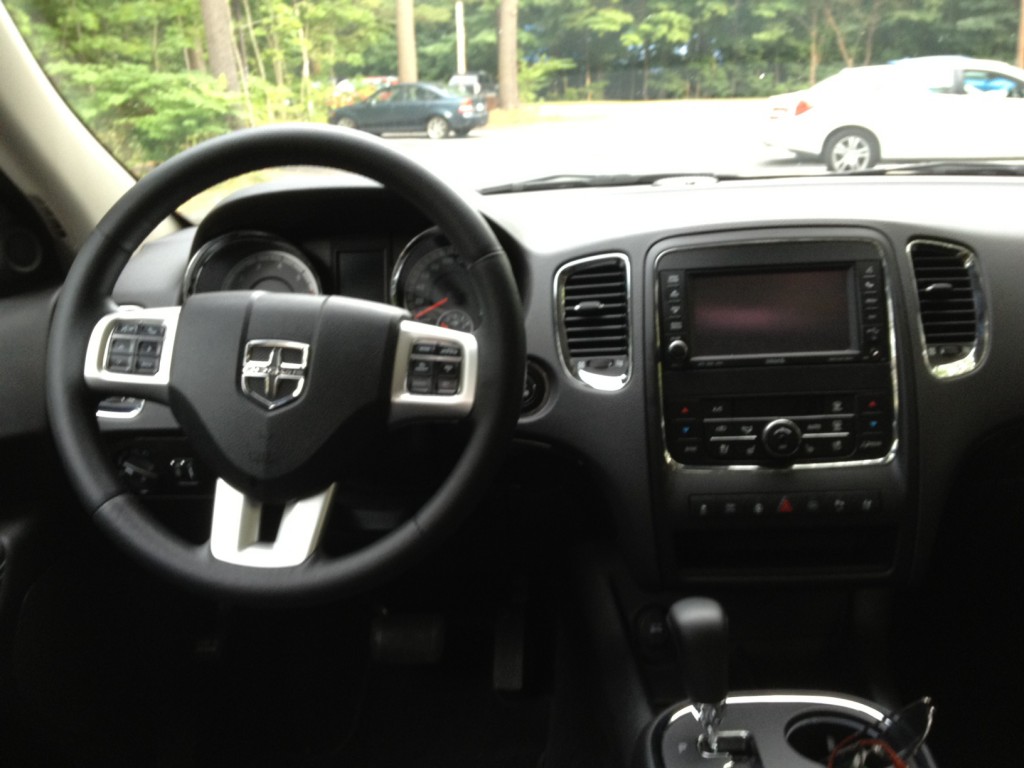 The seats are generally comfortable in all rows and access to the third row seating area is easier than in the Ford Flex. Folding the rear seats aren’t quite as easy as the electric system in the Flex, but it still takes no time at all to get them to fold flat and I’d wager most children could probably take on the task themselves. Even with all the seats up there is, as you’d expect, a decent amount of cargo room in the back with close to 500 litres of cargo space. There is an LED flashlight mounted on the side of one of the walls for emergency situations as well as tie down hooks and a cargo cover to protect your valuables from prying eyes. Given the dark window tints and overall height of the Durango, I’m guessing it would take quite an effort for anyone to actually see the cargo you’re carrying. Cup holders are available where they should be and there are lots of nice little cubby holes to store various items. 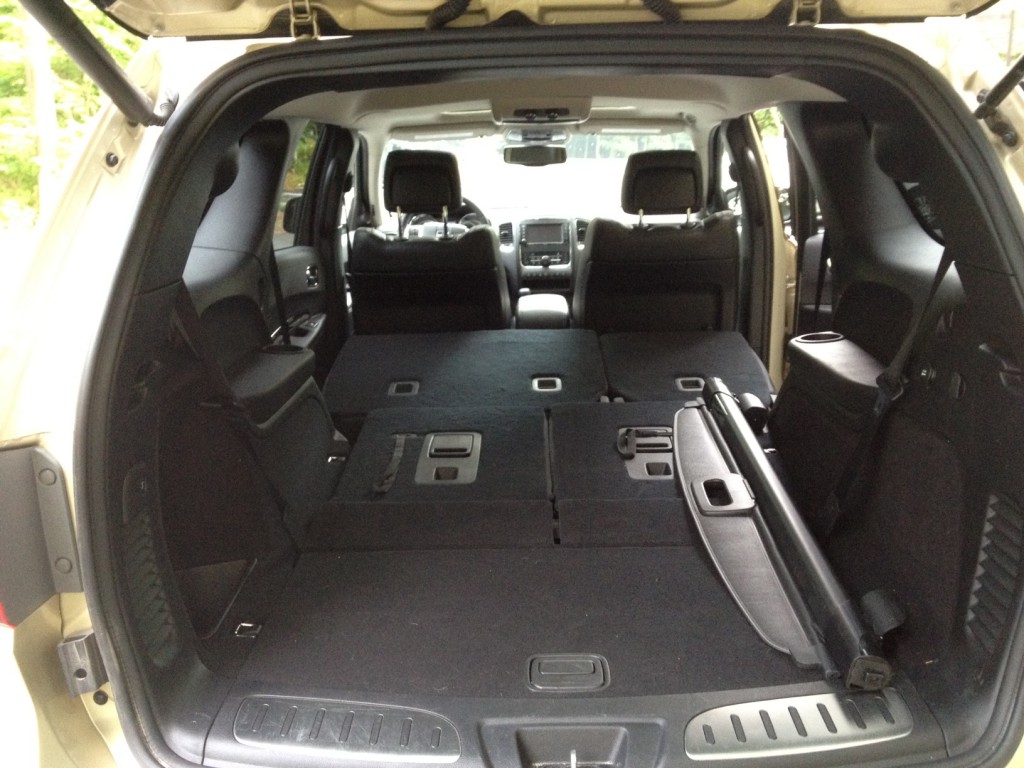 Another thing you get with Citadel trim level is Dodge’s infamous Hemi V8. It’s a 5.7 litre that makes 360 horsepower and 390 pound feet of torque. The result is more a powerful engine than a fast one. Stomp your foot down and the Durango will take off, but it never quite feels blisteringly fast. This engine is likely better suited to towing trailers and boats. Still, power delivery is smooth and the six-speed automatic shifts decently. While most automakers are trending on gearing their automatics for fuel efficiency, that is shifting to higher gears at lower RPM’s, the Durango’s transmission seems to allow for lots of RPM’s in first gear before shifting to second. This is much appreciated as it does take some power to get this porker off the line. 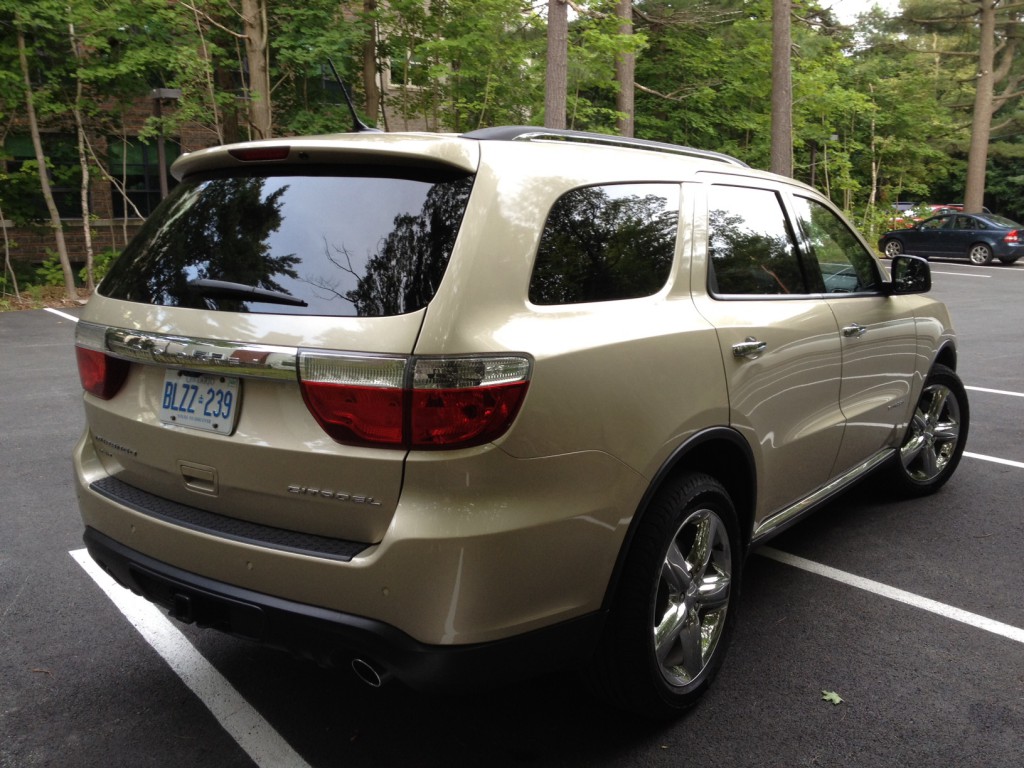 The Durango actually offers heavy steering feedback to the driver which is strange considering this vehicle was never made for sharp turns or taking corners at speed. With that said, there is minimal body roll when cornering, however it doesn’t take a whole lot to get the Durango a bit out of shape. The Durango offers a tight turning circle which is appreciated in parking lots and cul-de-sacs. 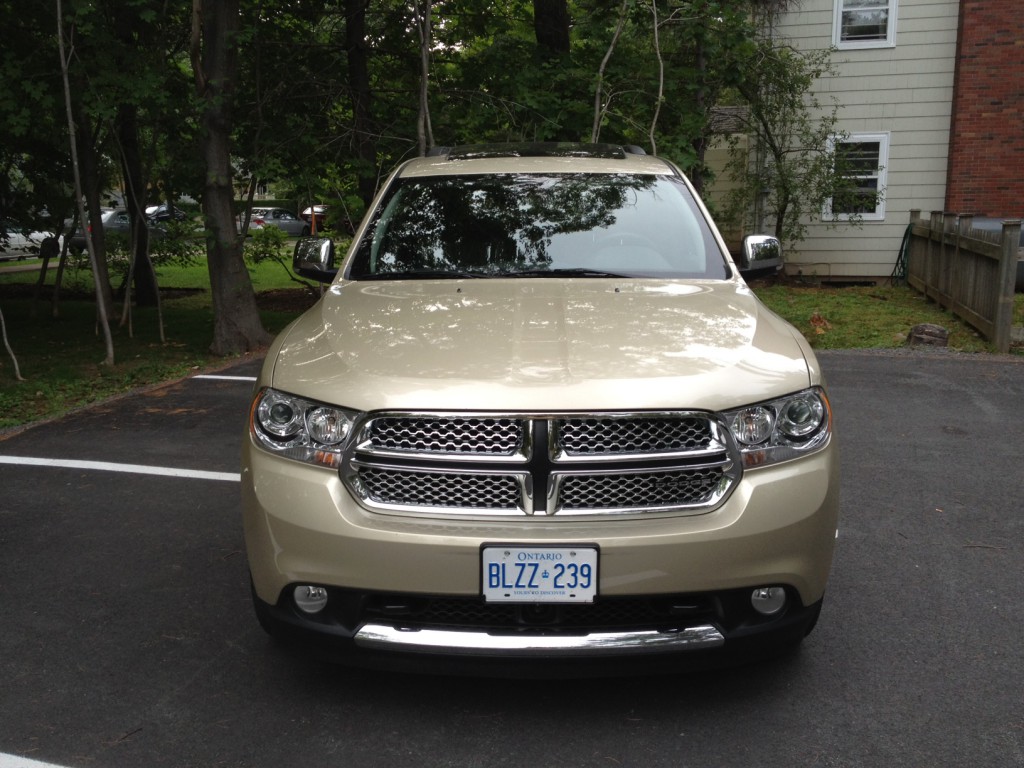 As you can imagine, fuel efficiency isn’t the Durango’s forte as it is officially rated at 16.6 L/100 kms city and 10.1 L/100 kms highway. Still it’s not as if Dodge didn’t try to at least ease consumption a bit as they incorporated cylinder deactivation technology. This essentially shuts down some of the cylinders when oodles of power are not needed. In addition, Dodge actually integrated an ‘eco’ meter into the tachometer. Keeping the needle within the green section of gauge likely helps to train people to drive a bit more efficiently. During my time with the Durango I averaged 16.5 L/100 kms of mixed city/highway driving. 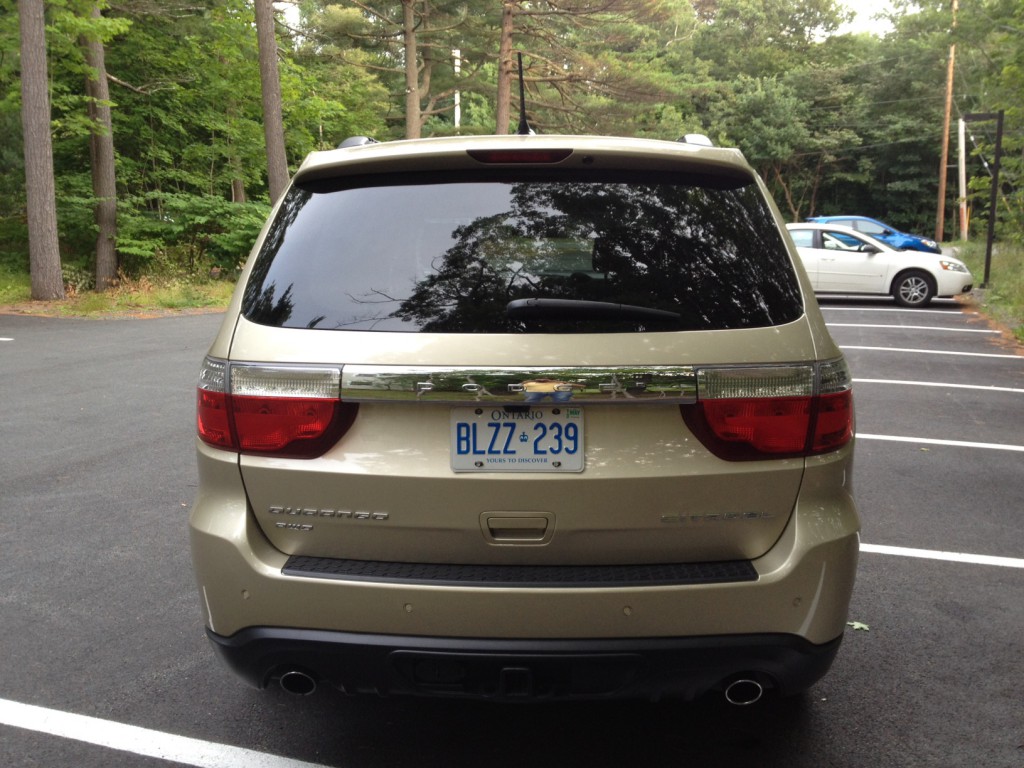 So, is the Dodge Durango an inexpensive Mercedes? Of course not, that’s a foolish thing to say and is likely insulting to both manufacturers not only because of the messy divorce but because of the markets they both cater to. Mercedes-Benz injects the finesse, grace and awe of a ballerina into its models. It is the standard of German luxury. Meanwhile Dodge is the good ol’ American blue collared brand with its tough, cut-throat image. Dodge is for your average Joe. They are almost polar opposites. And even though this particular Dodge still wears some German parts, it’s far from any Mercedes I have ever driven. It’s, well, more like a Dodge. And by the same token I can safely say that it’s far from any Dodge I’ve ever driven – that is to say, it’s the best Dodge I’ve ever driven. And I’d wager to say it’s among the best in its segment as a result.