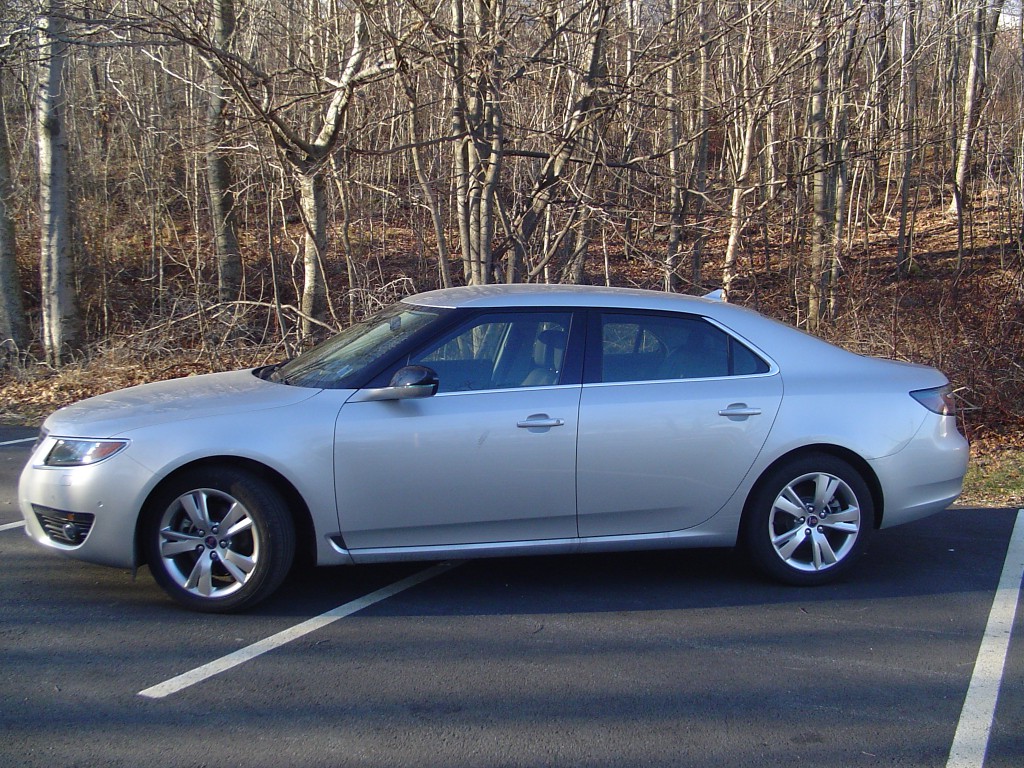 My dad has an old toaster that has got to be from 1960. It was given to him as a gift from his mother to help him get started when he moved out on his own. That was a very nice gesture but I’m sure my grandmother, if she were still alive, would have expected him to have gotten rid of it by now with a more modern one.

But no. It’s still in the kitchen and it still is being used. It also works about as well as a Whoopi Goldberg starring in a pornographic movie. Either it doesn’t toast the bread at all or it will burn it more times than Letterman burns Leno. It’s also terribly unsafe. Every time it pops the toast up after being “finished” there seems to be blue sparks that fly out. And when you unplug it, the same thing happens.

In every measurable sense your toaster is probably better than my dad’s. Except it isn’t. While your toaster may be able to exceed dad’s toaster in, well, everything, one thing I guarantee it doesn’t have is character. There’s a history and a quirkiness that goes along with dad’s toaster whereas you just bought yours at The Bay.

The same can be said for Saab. BMW, Audi, Mercedes-Benz and Infiniti all make tremendous sports sedans. Sure some can be argued to have character, but do they have the history and quirkiness that Saabs have?

What other car company can say they’ve come within a hair of certain death and live to tell the tale for instance? Thanks to Dutch car company, Spyker, Saab has beaten the terminal illness that GM administered it.

The first new model to come out of a revived Saab is the 9-5. Was it worth it, or should Spyker have just left Saab to die?

Since it’s no secret that GM was running low on cash for the past decade, they really didn’t have the resources to give the previous generation 9-5 a much needed refresh. The little funds GM did have went to volume sellers such as the Malibu and G6 (which didn’t work anyway) so the 9-5 actually went essentially unchanged for an unbelievable 13 years. Other car makers advanced their technologies, while Saab saw 9-5 sales wither away. But the new 9-5 is promising to take a very competitive aim squarely at the BMW 5-series, the Audi A6 and the Volvo S80.

Outside, the design has evolved quite nicely from the old 9-5 but still keeps distinctive Saab styling. The flat angled roof is a unique touch as is the aggressive front facia. Out back, complicated looking LED brake/turn signal lights along with a LED tail lighting which stretches across the entire rear deck lid helps the 9-5 get noticed. The overall design is agreeable, evolutionary and unique. 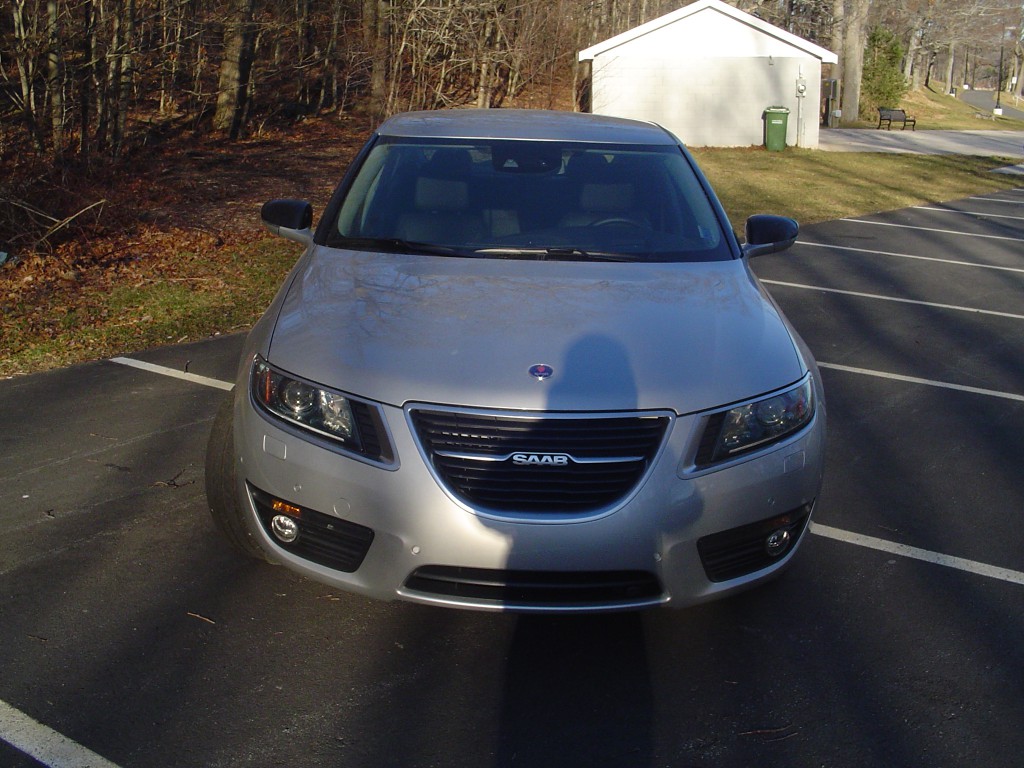 Inside the layout is still laid out like the cockpit of a fighter jet. There are still millions of buttons everywhere which pays homage to Saab’s “born from jets” mantra but gives it quite a busy and overwhelming feel to the driver. My tester had a feature which allows the driver to keep the key on their person without ever taking it out. The doors get locked and unlocked by touching the handle and the push button start does not need a fob. And yes, the push button start is located between the two front seats – a Saab tradition. Also a tradition is the jet-like ability to go into “night mode” which a push of the button dims the interior lighting to a more comfortable level on the eyes. Little quirks like this is what I mean when I say Saab’s have character. As per usual the seats are ridiculously comfortable. Maybe even too comfortable. Sure, they’re supportive enough for aggressive driving, but I’d wager you’d have a tough time keeping your eyes awake on a long trip in the 9-5 because it feels like you’re sitting in your favourite arm chair. 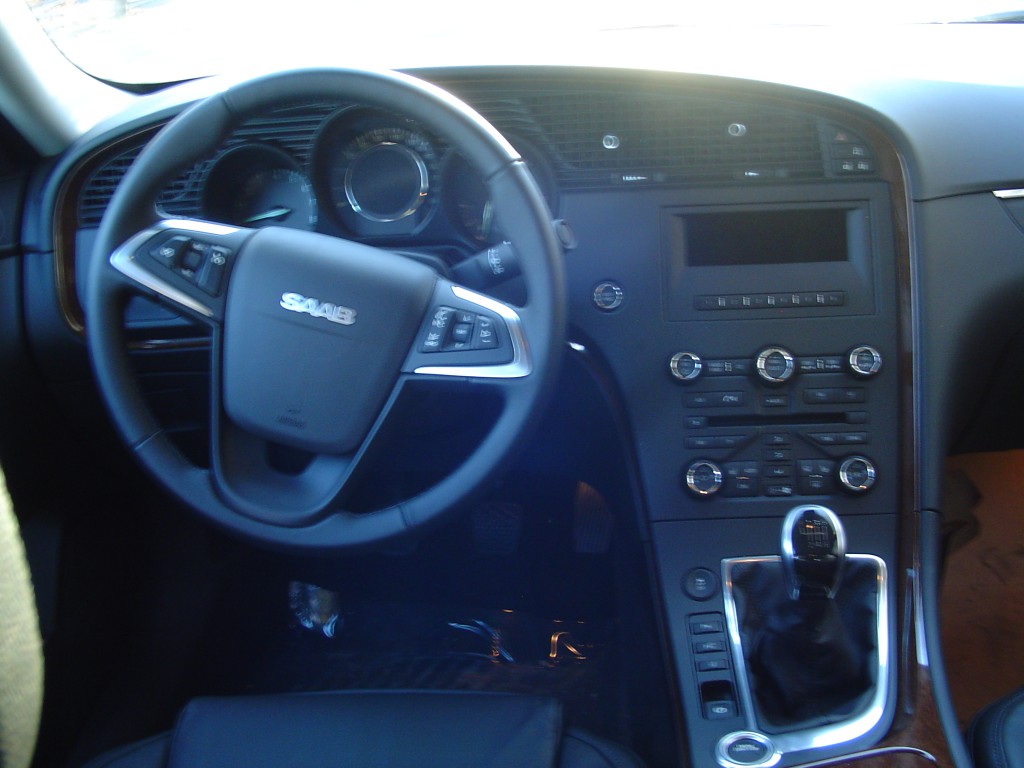 Rear legroom is good thanks to Saab stretching the wheelbase by 5.3 inches over the previous model and widening the car by 3 inches. This not makes the 9-5 bigger than the 5-series, A6 and S80 but also helps translate into better handling abilities, despite its large size. 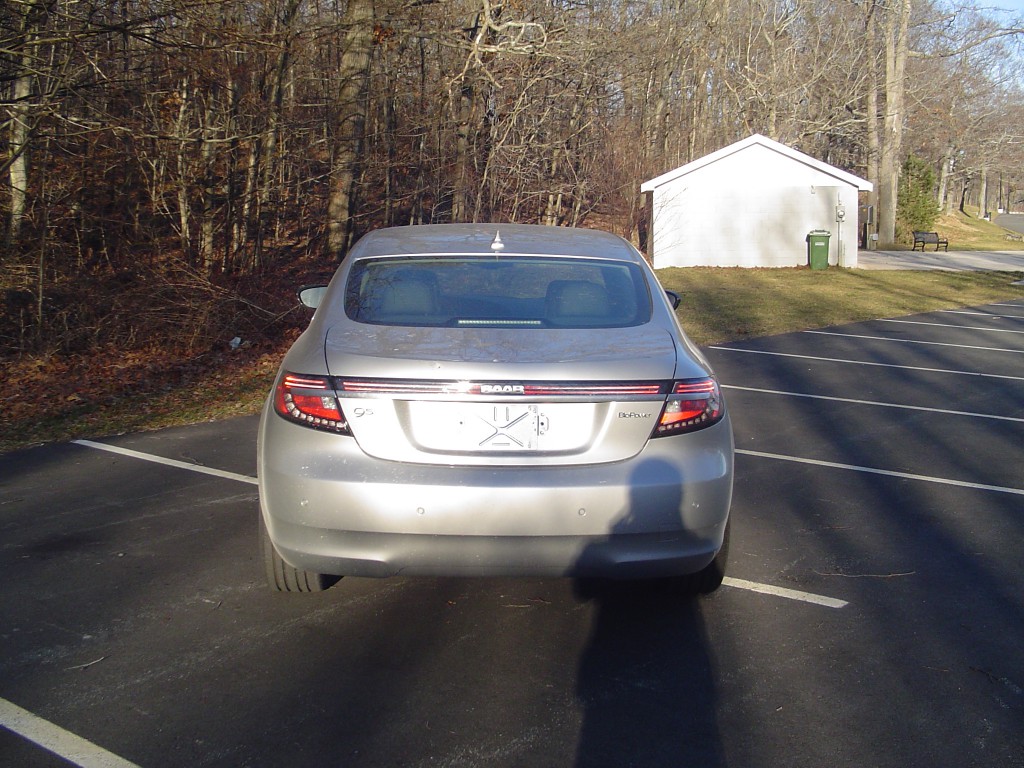 And this is where I start to become puzzled. The 9-5 comes in two flavours: the regular 9-5 and the 9-5 Aero. Oddly enough, Saab actually decided to go with two different suspensions in the trim levels. The top of the line Aero gets “HiPer strut front end” which essentially increases longitudinal stiffness and reduces torque steer. The base 9-5 on the other hand, uses a conventional multi-link suspension which improves comfort noise and vibration. Saab’s thought process was clearly that the hotted up 300 horsepower and 295 pound foot of torque Aero (which uses a 2.8 litre V6) should clearly walk the walk as a sports sedan, while the base 9-5 will take a more luxury role for those who value it more over performance. But I found the base 9-5 to handle quite well despite its set up for comfort. In fact, considering how big the car is, I was downright surprised. It’s poised, sharp and yes comfortable all at the same time.Steering feedback is decent but could be a bit heavier. Still, it’s miles ahead of the old 9-5. 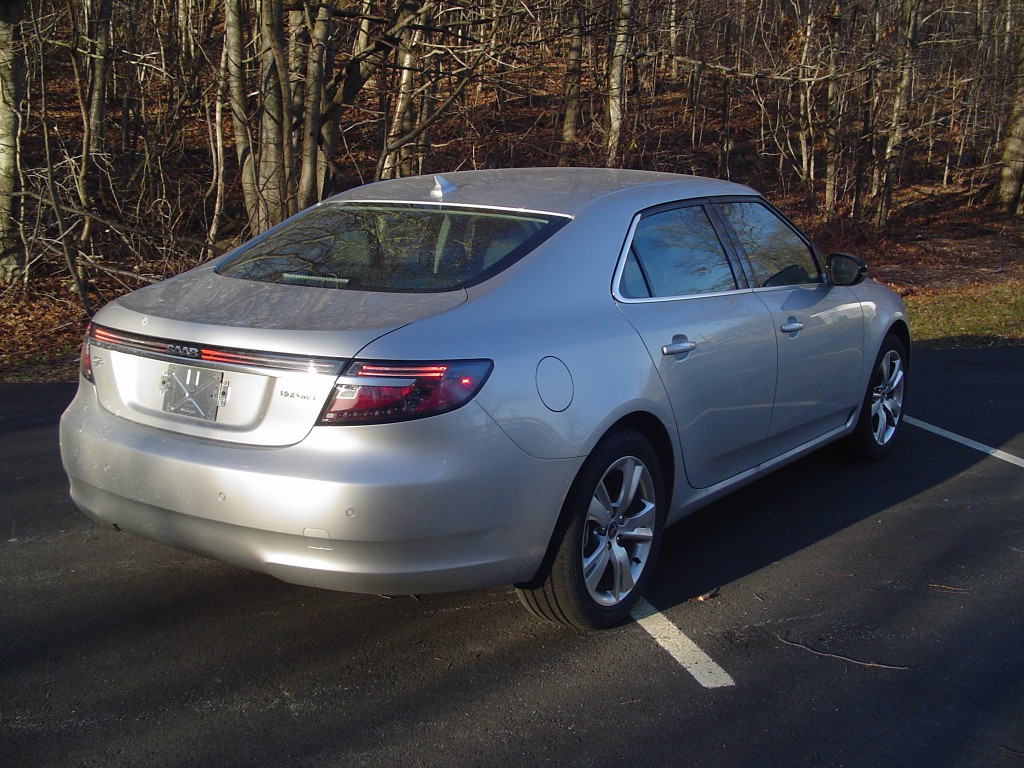 The 2.0 turbocharged engine in this base model churns out 220 horsepower and 258 pound feet of torque. My tester was mated to a six speed manual transmission and is the only car that has a manual option of all its rivals, aside from the BMW 5-series. Its 0-100 time is a respectable 6.9 seconds, however it’s still outdone by its rivals. The good news is, as a typical Saab, it’s quite the torque filled experience. While the base has a big 80 horsepower less than the Aero, it only has 37 less torques. That means power blasts in at very low RPM ranges and there’s even a turbo gauge on the dash that indicates how much you are actually using. And guess what. A Saab characteristic is missing from this puzzle. No turbo lag! None! No longer will the driver of a Saab get a heart attack when turning left into oncoming traffic with the throttle down to the floor and nothing happens. There’s almost instant power. 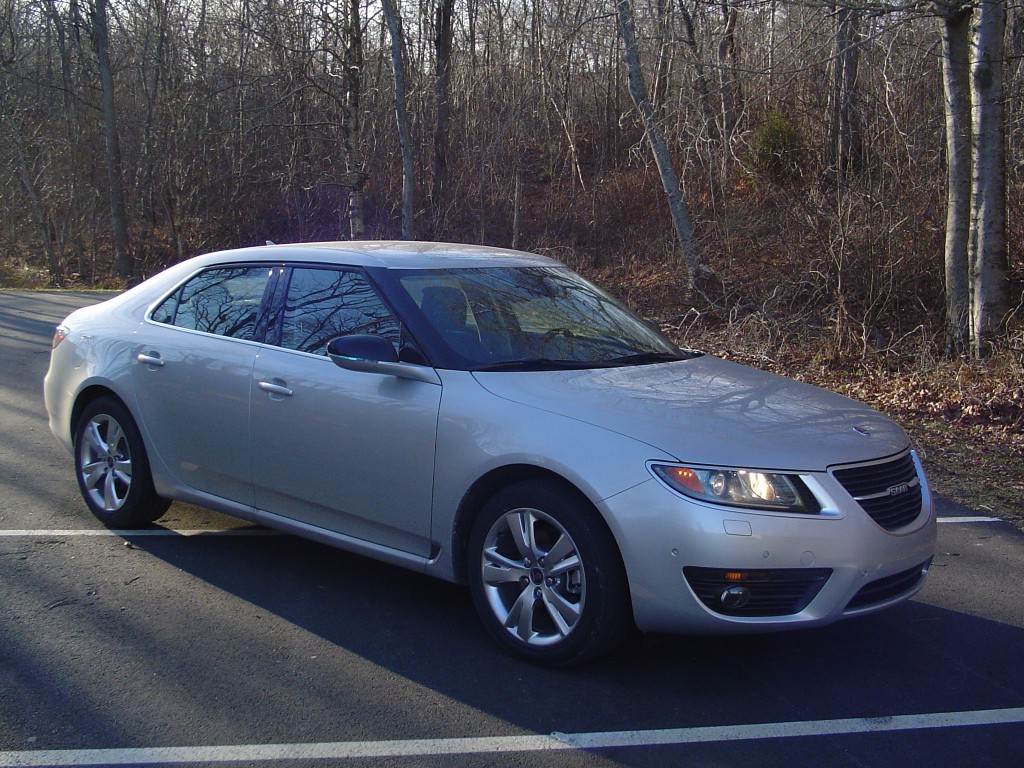 Another thing that the 9-5 does that is very unlike any Saab before it is….wait for it… have close to zero torque steer. One of the more annoying Saab quirks was always the immense amount of torque steer. Torque steer so bad that you ended up in your neighbours front lawn while trying to drive down your street. But in the new 9-5, go ahead. Take your hands off the wheel and floor it. There is only very minute torque steer.

But don’t think for a second that Saab has lost all its quirks. They’re still there and a lot of it can’t be explained in words. Much like driving a BMW, there’s just something about the experience that is hard to describe. And it’s a good experience. 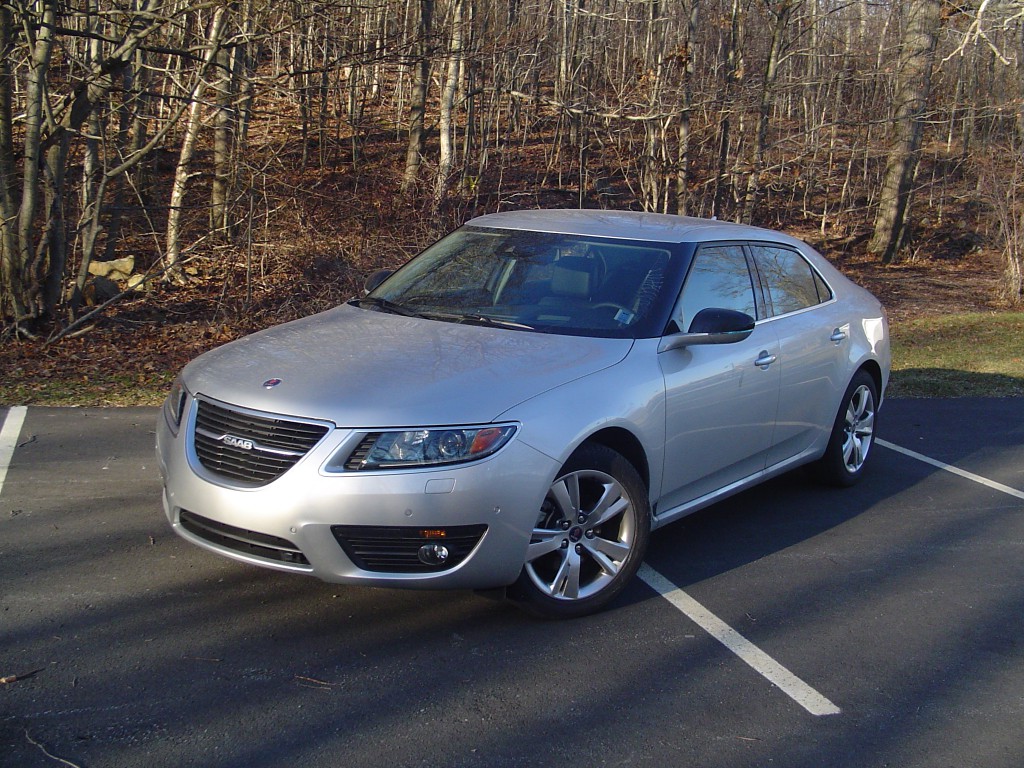 For those of you who have an older 9-5 and are hesitant to get rid of the trusty old quirky toaster, don’t worry. Because this new 9-5 is just as trusty, charismatic and quirky as your current 9-5 and as my dad’s toaster. And if this is a sign of things to come from the new and improved Saab, well, the only thing left to say is thank you, Spyker.

*Note: When this article was originally published it incorrectly mentioned the 9-5 Aero as having a 3.6 litre engine. The Aero actually uses a 2.8 litre V6. We all make mistakes, right? It has since been corrected.