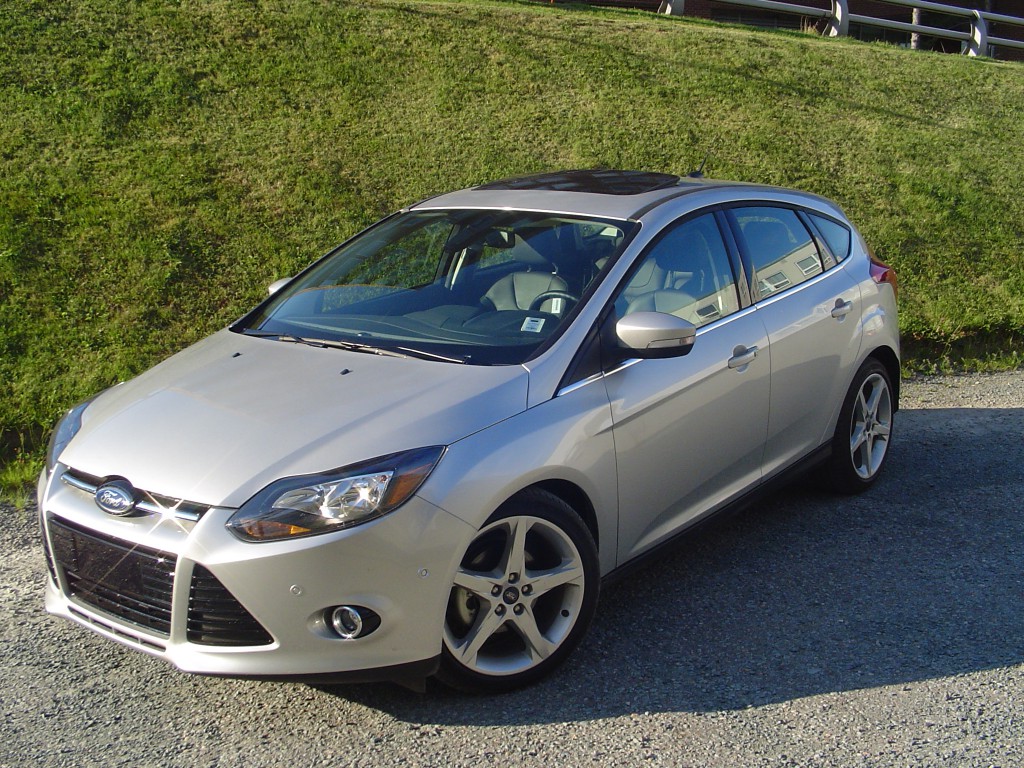 This past weekend I met up with a friend that I hadn’t seen in a while to catch up. I suggested a local pub that he had never been to. Once we arrived, I wasted no time in telling him what to get.

“The steak is unreal here,” I said, salivating at the thought. “The ribs are great too. In fact, everything is pretty good, the only thing I wouldn’t recommend is -“

“I think I’ll give the liver and onions a try,” interrupted Andrew, choosing the one item I tried to warn him about. Now, while I realize liver and onions are an acquired taste, I was not suggesting he avoid them due to some sort of personal disgust. It was more the fact that I had tried them before and nearly vomited on the spot. This joint could not make good liver and onions, no matter how hard they tried.

Stupidly, Andrew brushed off my warnings and went with the liver and onions. Not wishing to concede that his decision was a bad one, Andrew managed to put on a forced smile once it arrived and an “mmm” with every second bite knowing full well he was feeling the exact opposite.

Later that night I sent him a text about an unrelated matter and Andrew replied, “can’t talk now, really not feeling well”. The next day I later found out that Andrew’s stomach had smartly rejected what Andrew was forcing down.

Needless to say, being the good friend that I am, I promptly called him up repeating ‘I told you so’ in between laughs.

I also used to do that with friends that bought a car without first consulting me. Usually they’d come home with everything from a Ford Focus, to a 15 year old Mercedes-Benz S-class because they were cheap. The latter is particularly well known for its reliability (or lack thereof) while the former was best known as the best buy for rental companies only. It wasn’t particularly good at anything other than saving you money in initial cost.

Well now there’s a new version out and Ford promises it won’t disappoint and won’t be anything like Focuses (Foci?) of the past. I tried one out to see if it was true. 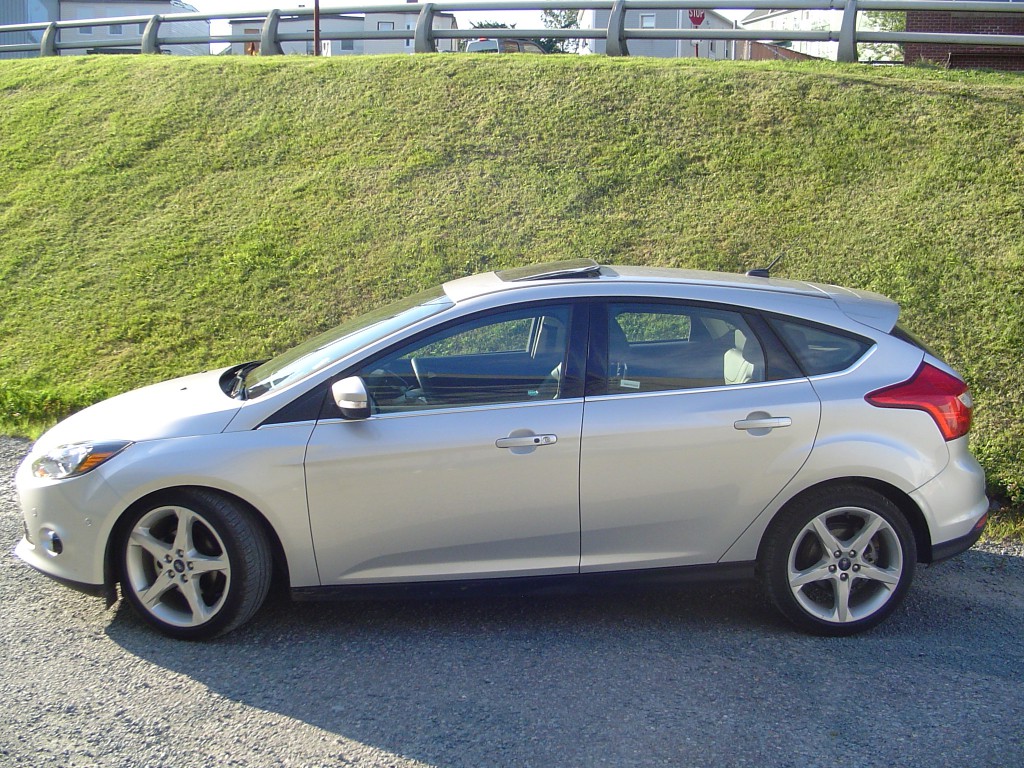 ‘European styling’ is a term every automaker’s PR department gushes about even when it’s not true. With Ford’s new Focus, however, they managed to pull it off. This is mostly because this is the Focus that Europe has enjoyed for the past few years and continues to do so today. The front end is particularly pleasant to look at as it is quite aggressive with large air intakes near the bottom, a stylish grille, fog lights integrated into the body and non-assuming headlights. The side profile of the hatch is sleek and enhanced by my tester’s large five-spoke 18 inch wheels. Side skirts help it from looking like a crossover. In the rear, the European style tail lights and roof mounted spoiler complete the look. Simply put, this is a hot looking hatch. 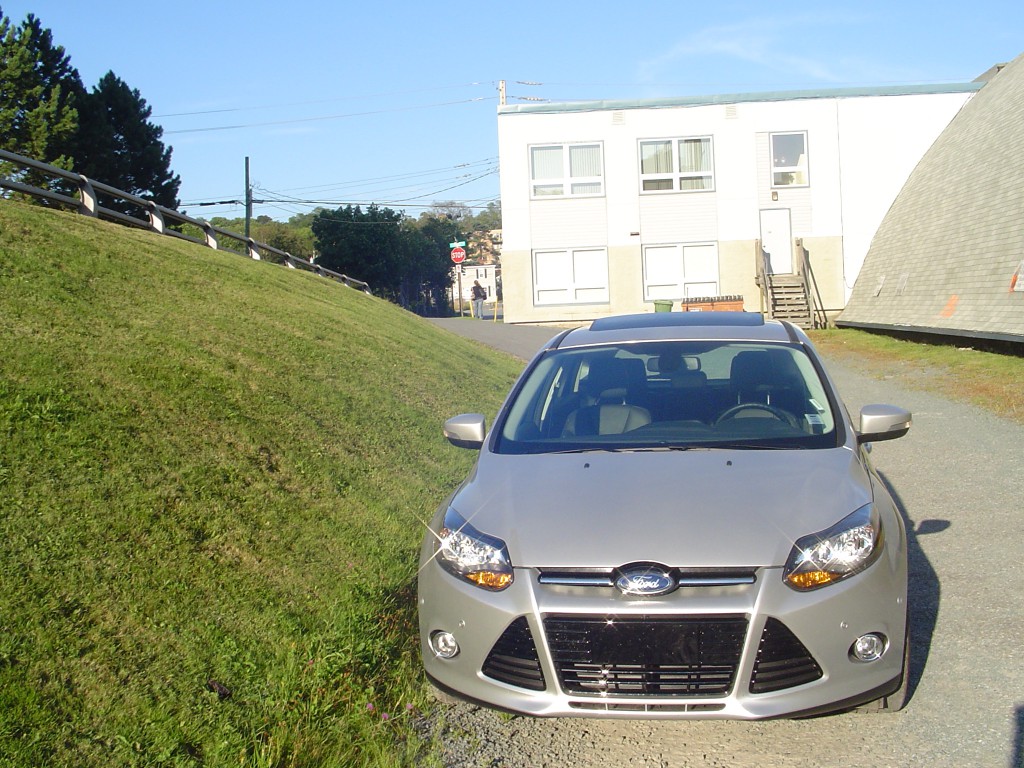 Inside, fit and finish is the name of the game. The leather feels rich, as does the dash and other materials. Headroom and legroom are a bit wanting, but it’s not as if you’ll ever feel cramped back there. You’ll do just fine, even on longer trips. The seats are comfortable and offer good support with large side bolsters to hug you in the corners. The front driver and passenger seats have five settings for the heated seats. Yes, five. Since it was a steady 24 degrees each day I spent with the Focus, I had no urge to try them out, but I can only surmise that five setting for seated seats is a bit overkill. One, maybe two would do. The dash layout design is clear and sort of futuristic looking. The center screen where most everything is controlled such as audio is still a bit confusing if you’re not used to it, but I got the hang of it after a while. It’s a touch screen that sometimes requires two or three touches before it responds to your command. One thing that pleased me was the lack of annoying cartoon sounds when pushing the screen or a button. That seems to be reserved for the Edge. 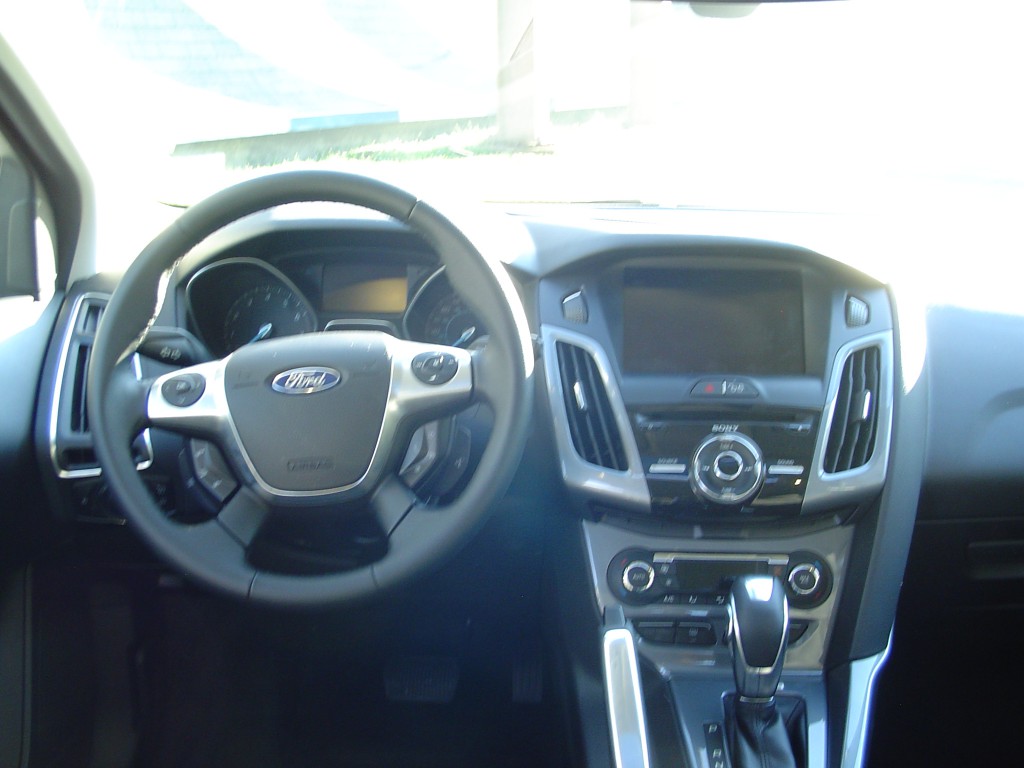 When out and about in the Focus the first thing you’ll notice is the steering. It’s heavier than most vehicles in the segment, and believe me, that’s a good thing. Especially considering the focus has a fully independent rear suspension, a wider track and a lowered stance: a great recipe for enhanced handling. Add on those large 18 inch wheels with Michelin Pilot Sport rubber the the Titanium-only sport suspension and you’ve got yourself one hell of a great handling car. Dodge, Toyota and yes, even Honda could learn a lesson or two from this package. The only competitors that feel just as compliant in the handling department is the Mazda3 and Volkswagen Golf. It may be a three-way tie here. But considering throwing the old Focus in a corner was akin to throwing away your dignity, that’s quite the large step Ford has taken. It’s poised, precise, sharp and nimble. As you’d expect, body lean is quite minimal as is under steer – the latter is mostly thanks to electronic stability control. 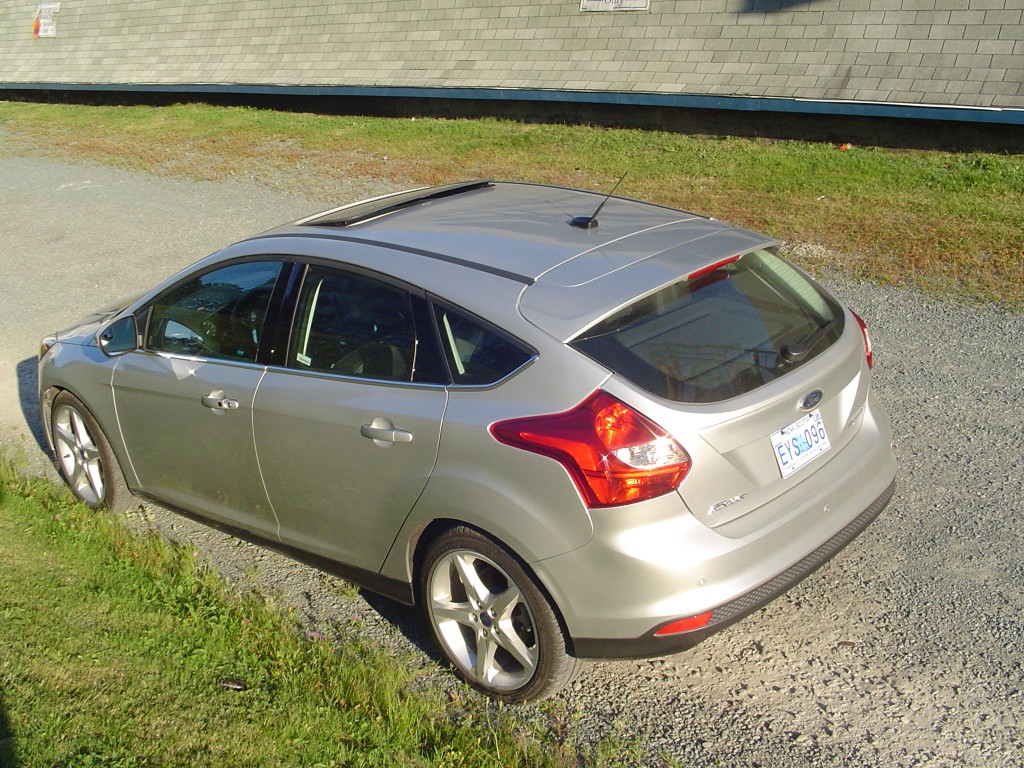 Power comes from a 2.0 litre four cylinder unit which makes 160 horsepower which bests most of its rivals, not least of which is its predecessor which only had 140 horses, but is outdone in the torque department with 142 pound feet. This is obvious at lower RPM’s where the torque kicks in mostly at higher RPM’s. This makes the Focus quite the screamer at higher RPM’s but mid-range power is lacking, especially for passing duties on the highway. 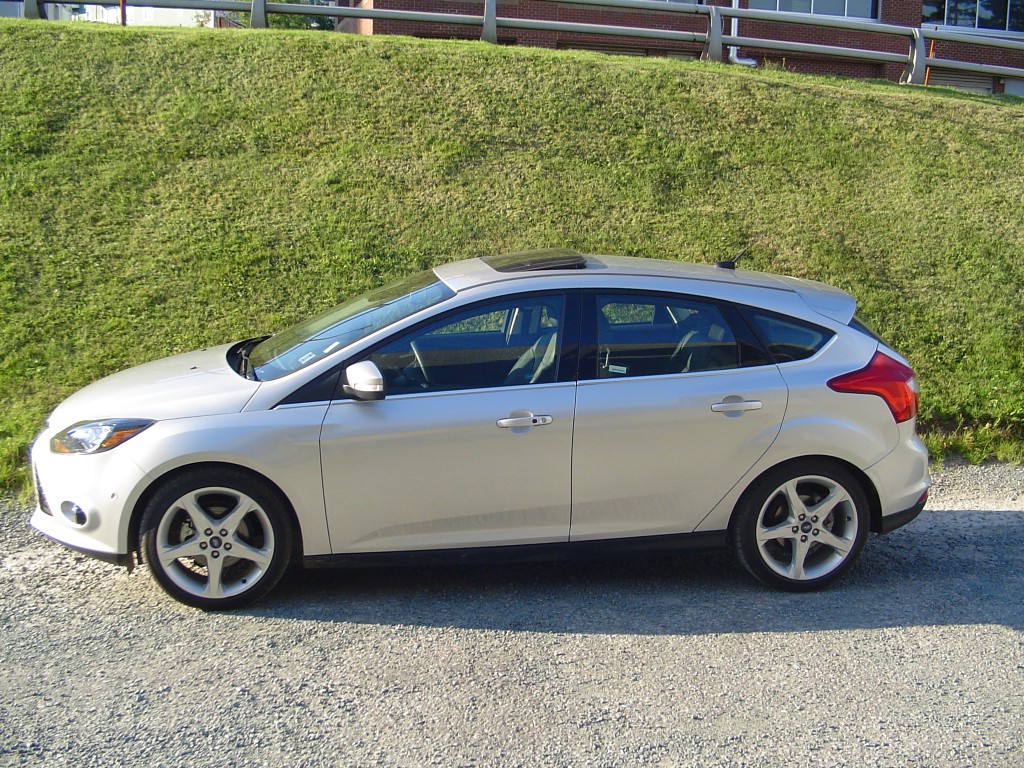 Speaking of the highway, the Focus is calm and smooth. The six-speed automatic transmission, even though geared for fuel efficiency in mind, shifts smoothly and is responsive when power is needed. I’m not a fan of the push button to change gears manually, but I suppose that’s just more of a preference than a fault. When in regular automatic mode, there does seem to be a bit of hesitation off the line when switching from 1st to 2nd gear. 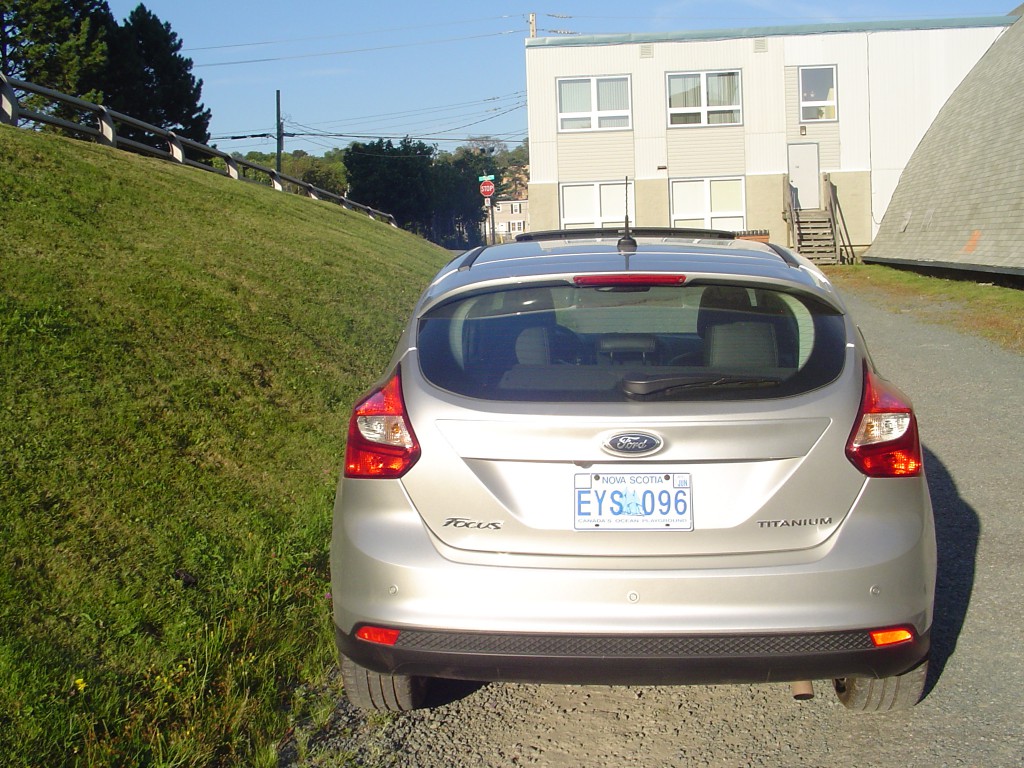 The Focus’ fuel efficiency is very impressive. Rated at 7.3 L/100 kms city and 5.2 L/100 kms highway, it beats its competitors hands down. I averaged 6.6 L/100 kms of combined highway and city driving. Not bad at all. 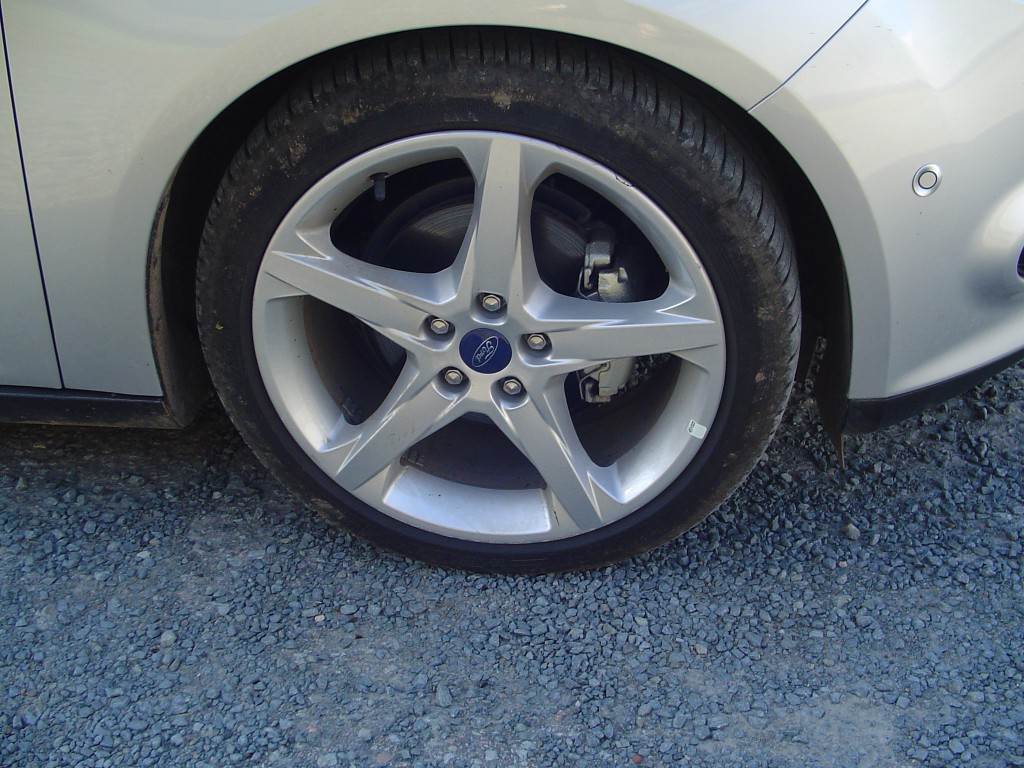 Faults? Well the turning circle is pretty large for its size, you’ll be doing lots of frustrating three point turns. When the Focus is sitting at idle, say at a red light, you can feel vibrations through the steering wheel and, well, everywhere else. The privacy cover over the hatch is quite cheap and the string holding it in place actually broke when I opened the hatch once. Oh, and the button for locking the car on the fob is oddly placed in the middle. That makes it harder to know which button is the lock button if you’re just locking the car from your pocket. Yeah, that’s about it. Seriously. 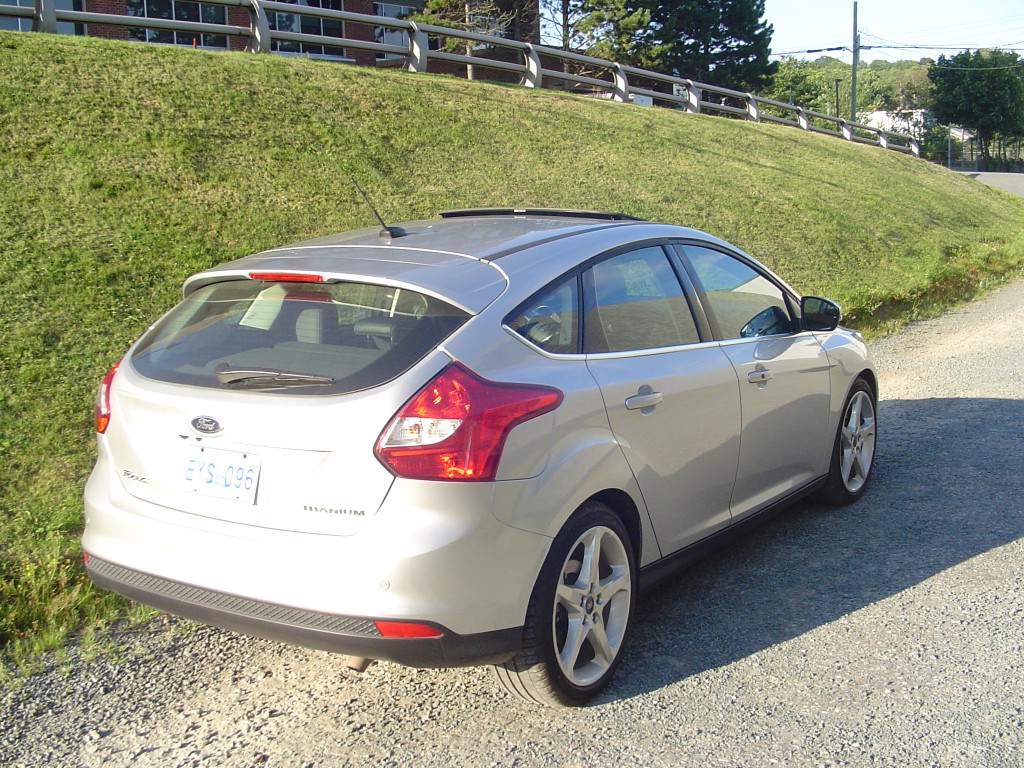 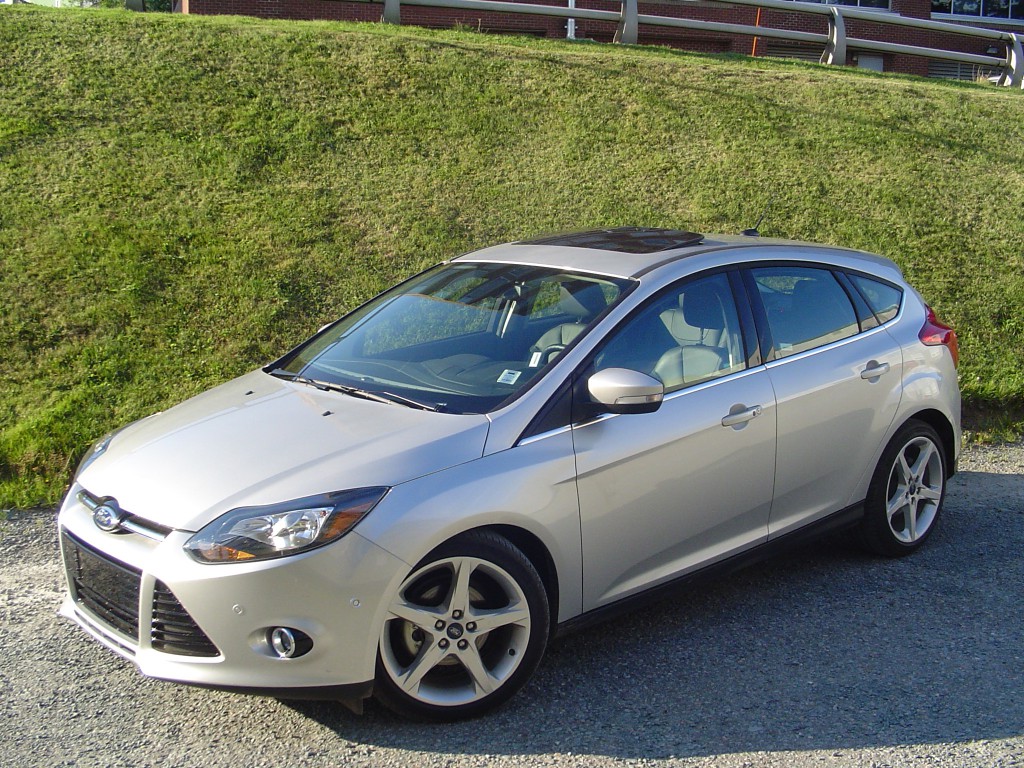 The Focus is no longer the liver and onions to be avoided, it’s upgraded itself to the fillet minion. Now when I laugh at my friends for buying the wrong car because they didn’t consult me first, I can now say, “you should’ve bought a Focus”. I used to say you were stupid for even considering a Focus, now I have to say you’re stupid if you don’t.