A while back, my fiancee and I decided to take a two-day jaunt to Digby, Nova Scotia.

It was possible that the tow and a half hour drive would have been trying for her, as she awaits to get hip surgery in a couple of months. Sitting for long periods of time can sometimes cause unbearable pain.

I wasn’t quite sure which press vehicle I was scheduled in for that week, but I knew the only way we could make it work is if it was a smooth, comfortable cruiser – bonus points if it also happened to be good on gas.

As it turned out, the press vehicle in question and our chariot for the trip turned out to be a brand new Toyota Camry XLE Hybrid. It couldn’t have been more perfect unless it was a Lexus Hybrid, really. 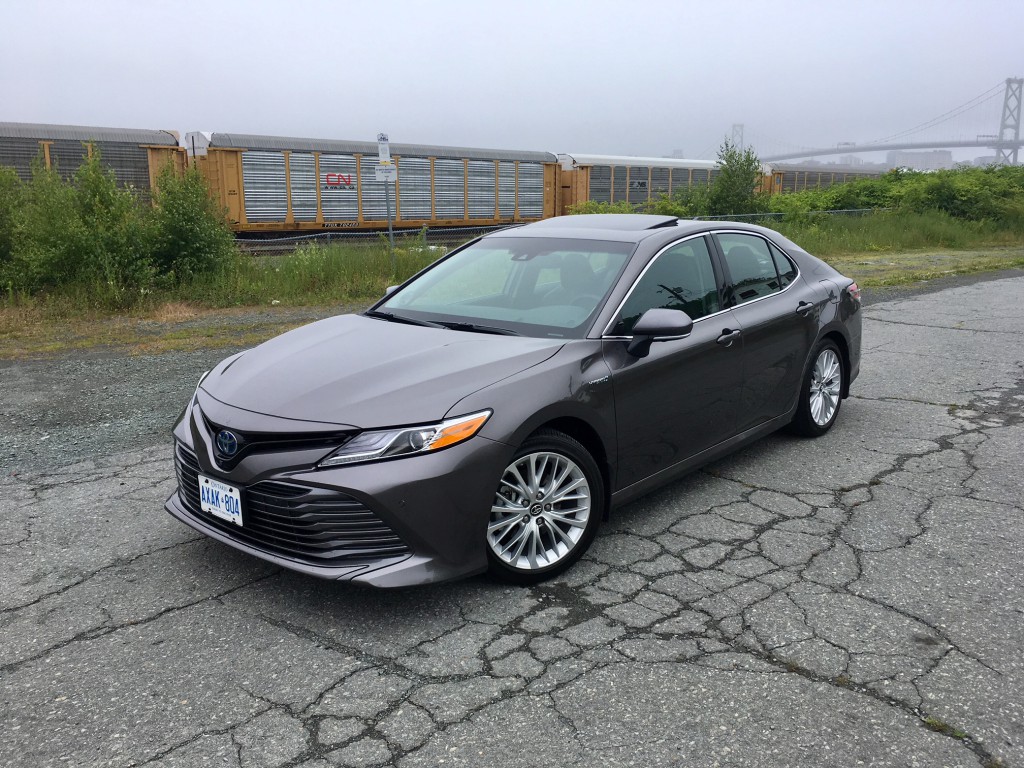 This particular test vehicle was grey. Even better, I thought. No one notices Toyota Camrys, let alone Camrys sporting conspicuous paint colours. That means we would attract less attention from law enforcement; not that we had any real reason to worry – I tend to stay within the confines of the law. Mostly. 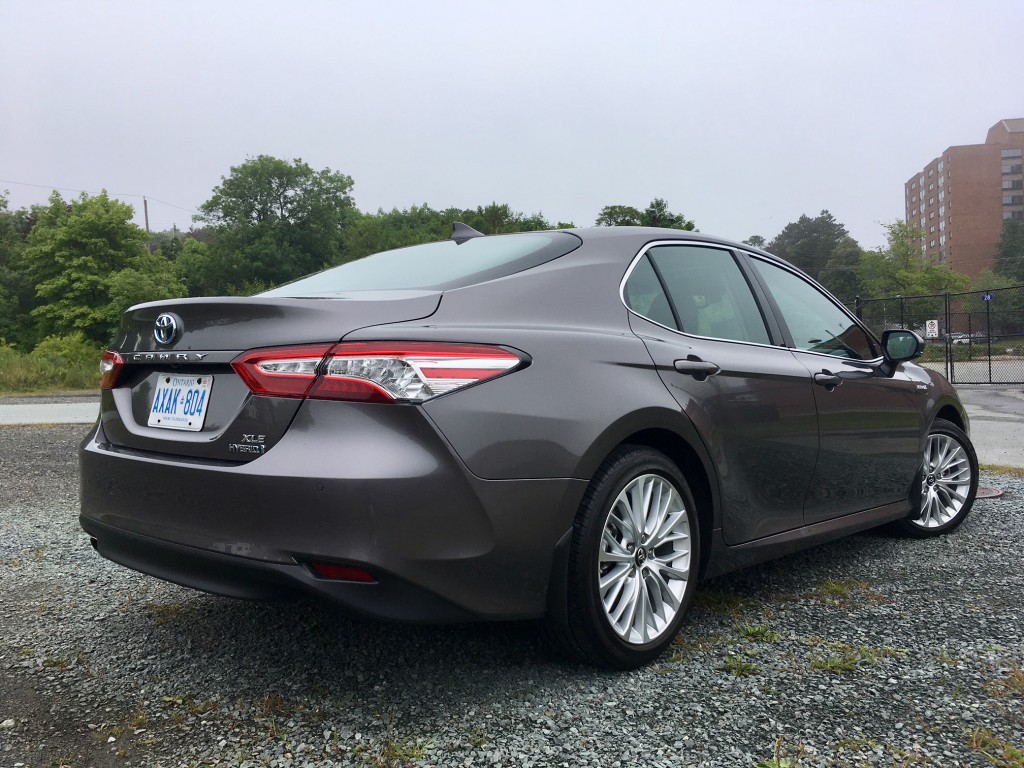 As it turned out though, our Camry hybrid generated more attention than anticipated and it wasn’t from the cops, it was from John Q. Public. It could be because the Camry has been recently redesigned and it’s fair to say that Toyota wanted it to stand out. Therefore, the new Camry is lower and wider. It can be spec’d out to look like an all-out sport sedan, or a high-end luxury liner, depending on which trim you choose. The XLE took care of the latter with standard LED headlights, rather nice looking 18-inch alloy wheels and all LED tail lights which are stretched for a wider appearance in the back. But perhaps the most notable styling feature is the new grille which is not bigger and wider than ever – to the point where it accounts for about half of the front facia. The ‘luxury liner’ models get horizontal lines in lieu of a traditional bumper. This look is a bit much to my eye and is reminiscent of a smiling whale showing off its baleen, but most who took the time to size it up an down seemed to agree that the new look is a thumbs up. 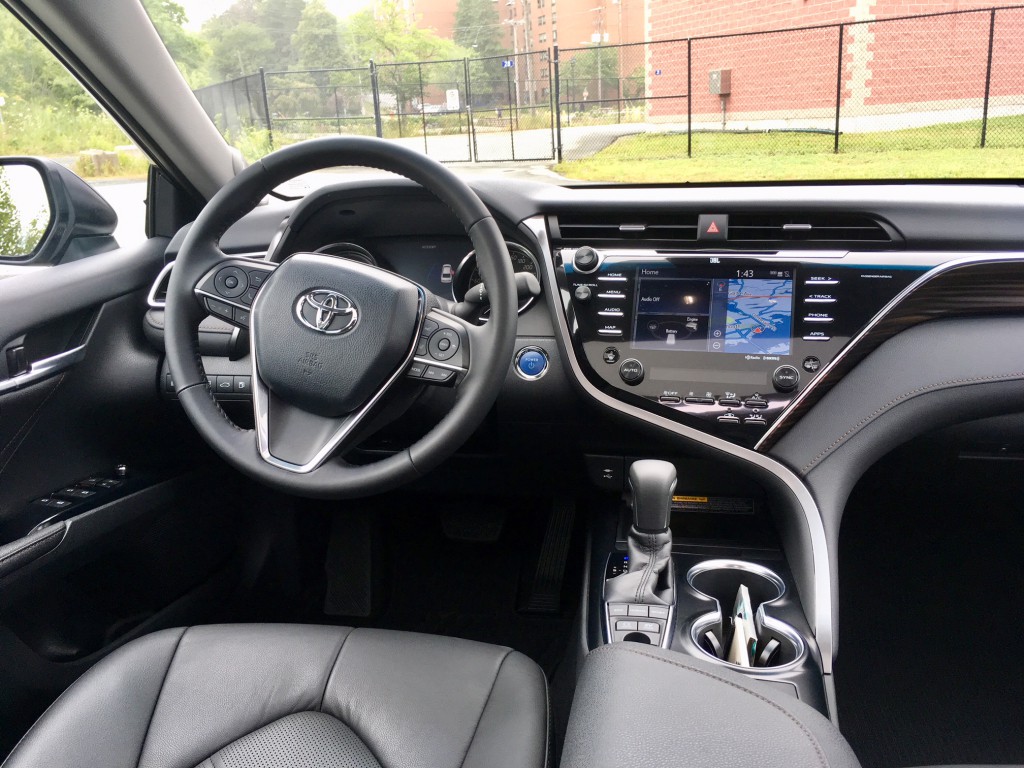 The Camry has always had comfortable and logical interior layouts with the upper trims pushing the premium boundaries to border on luxury looking and feeling. Toyota took some of that zeal from the exterior styling and matched it inside. The first thing you notice is the asymmetrical dash layout. There’s soft touch materials throughout and any hard touch materials felt high in quality. Overall, the interior is well appointed. 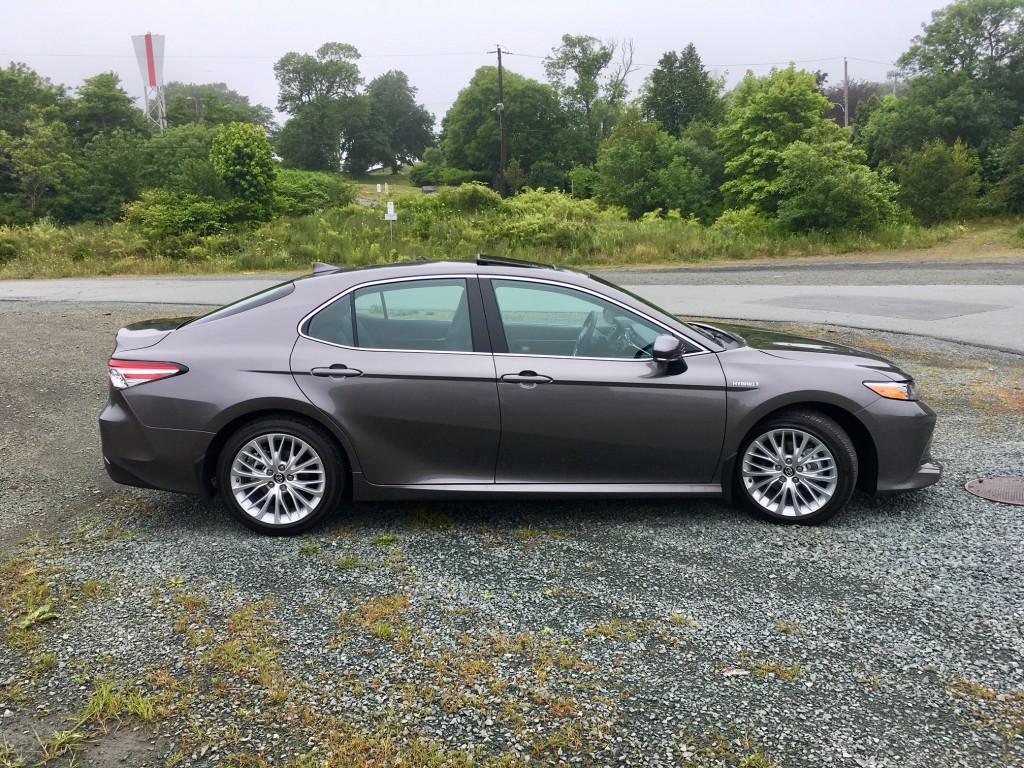 My fiancee welcomed the quilted patterned leather seats which coddled us both during the drive to Digby. These seats don’t offer a lot of side-bolstering for support in the corners, but Toyota must have figured that most hybrid buyers don’t turn into Lewis Hamilton suddenly on the weekends. 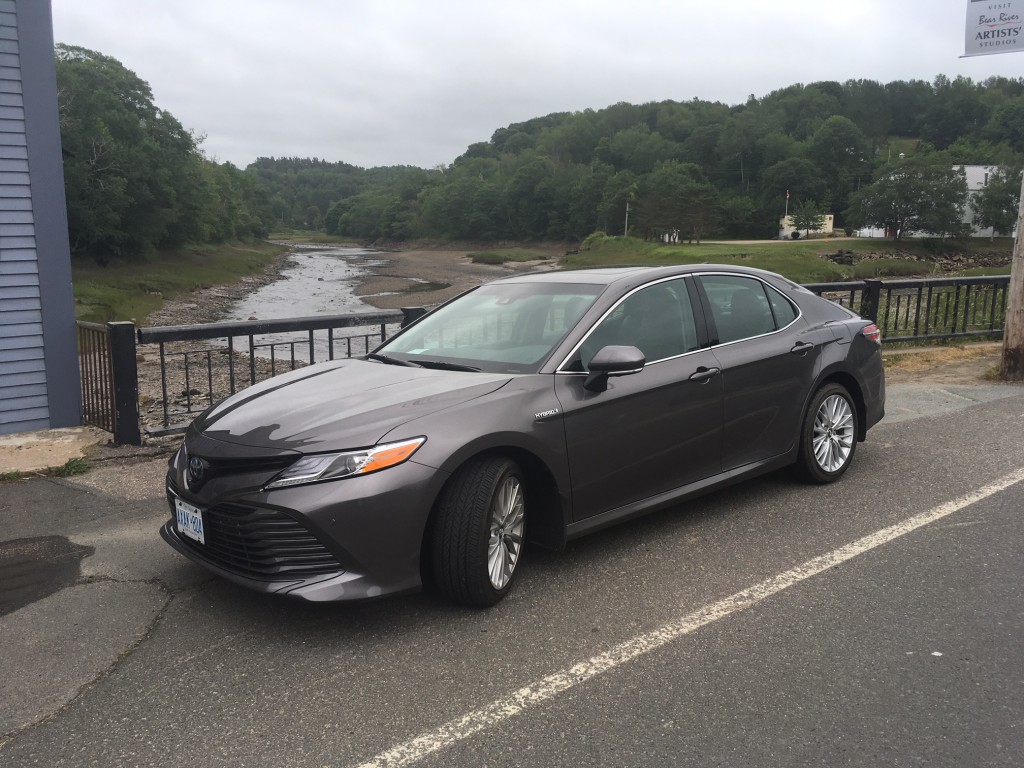 The Camry in XLE trim offers an eight-inch touch screen that is logically laid out and relatively quick to respond to commands. Toyota’s Entune system lets you control certain apps like Yelp, or you can plug in your phone and use it from the interface thanks to it being Apple CarPlay and Android Auto compatible. 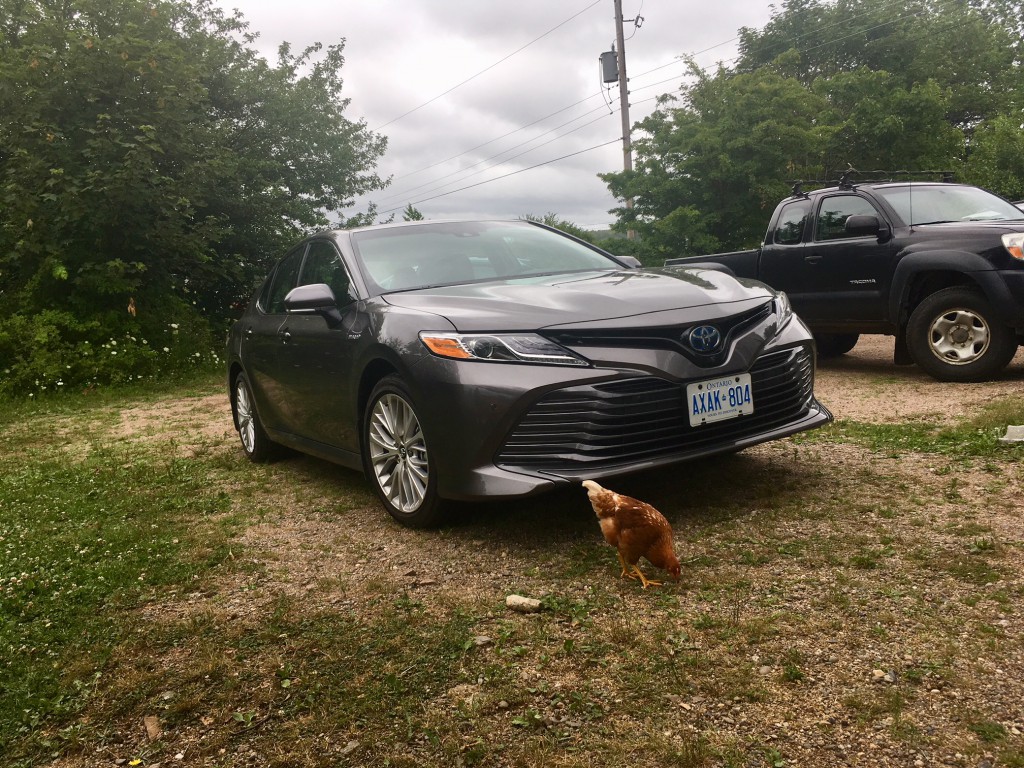 Other goodies include blind spot monitoring, rear-traffic alert with automatic braking, and a very cool 360 degree around view camera which is perfect for backing into a tight space or parking next to the curb so you don’t scratch those nice rims. In fact, this loaded Camry has almost everything you’d want except for one odd and glaring omission: automatic wipers. Unfortunately, it rained a lot during our first day in Digby, so this was particularly noticeable. While it isn’t a huge deal to use the wipers manually, it certainly should be at least optional at the top tier trim. 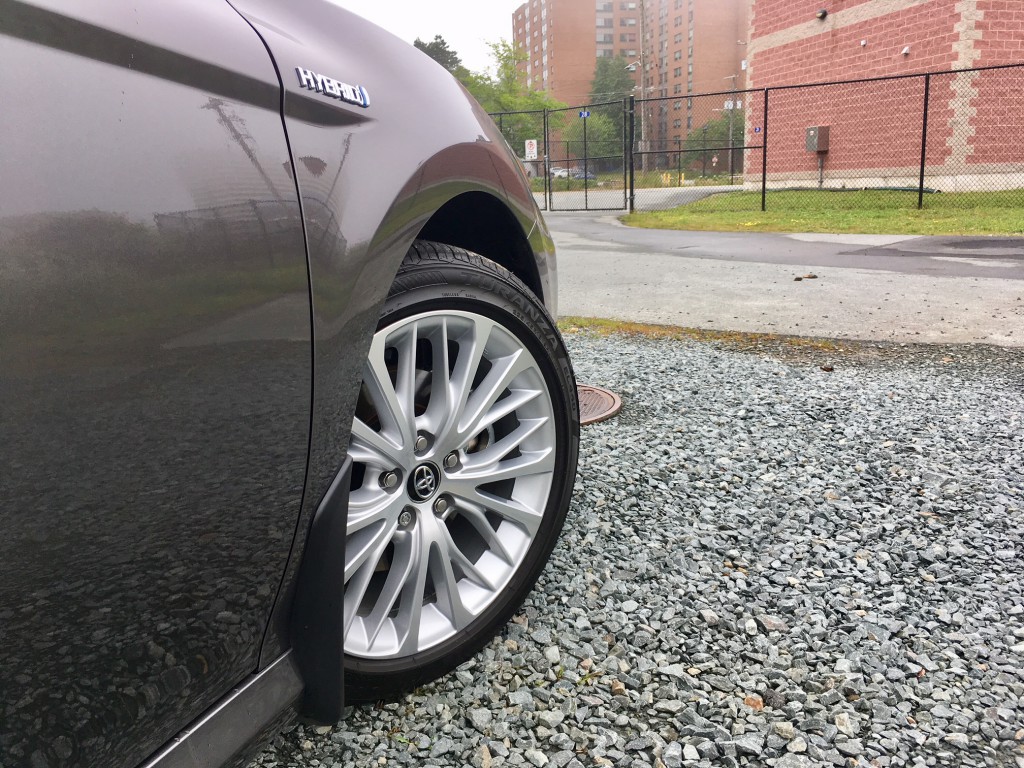 The Camry Hybrid is powered by 2.5 litre 4-cylinder and, of course, and electric motor. Combined output comes in at 208 horsepower mated to a CVT. That may not sound much these days, especially for such a large vehicle, but it should be noted that the hybrid now makes more power than the entry-level 4-cylinder engine which makes 203 horsepower. Sure, that engine gets a traditional transmission (eight-speeds), but the Camry hybrid is very much on par when it comes to off-the-line acceleration. In fact, it wouldn’t surprise me if the hybrid was actually just a hair quicker. 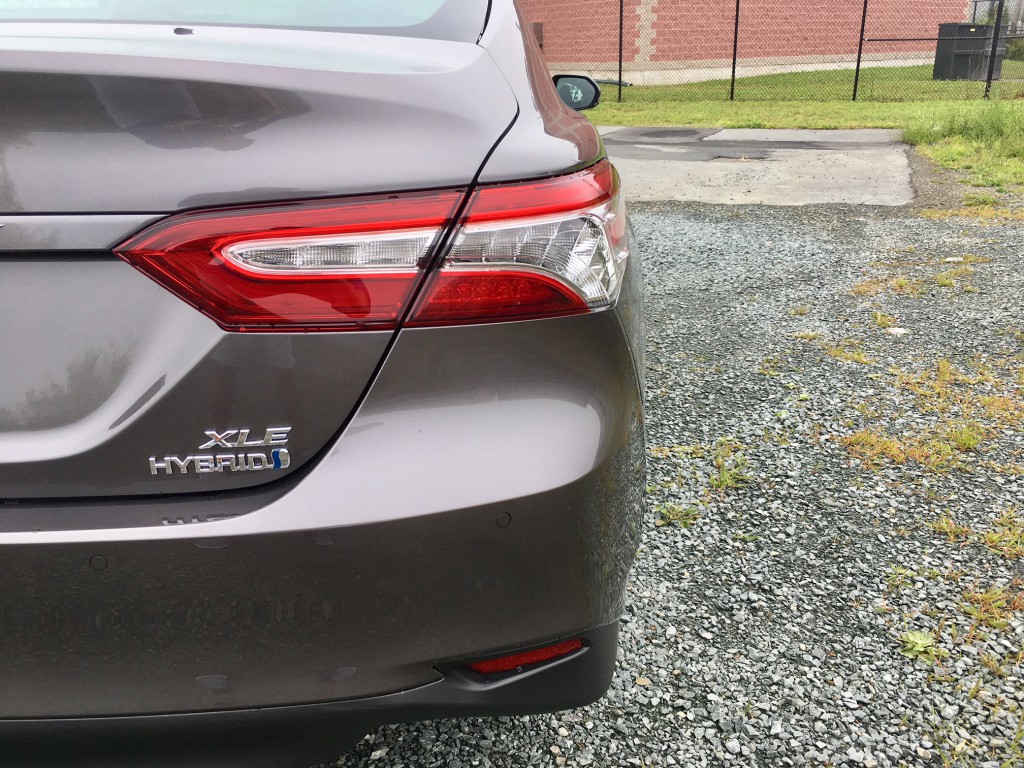 It also proved to have an adequate amount of heft for passing on the highway. It isn’t brutally quick, but it gets the job done without much fuss, though pushing the Camry Hybrid into the ‘power’ range does make for a far bit of noise that intrudes into the cabin. Otherwise, it’s a superstar on the highway – exactly what we needed. It was calm, comfortable and smooth. Steering feedback is pretty good for a hybrid and the adaptive cruise control was easy to use and modulate. I asked my fiancee repeatedly if she needed a break, but to her own surprise she did not. She was completely comfortable. 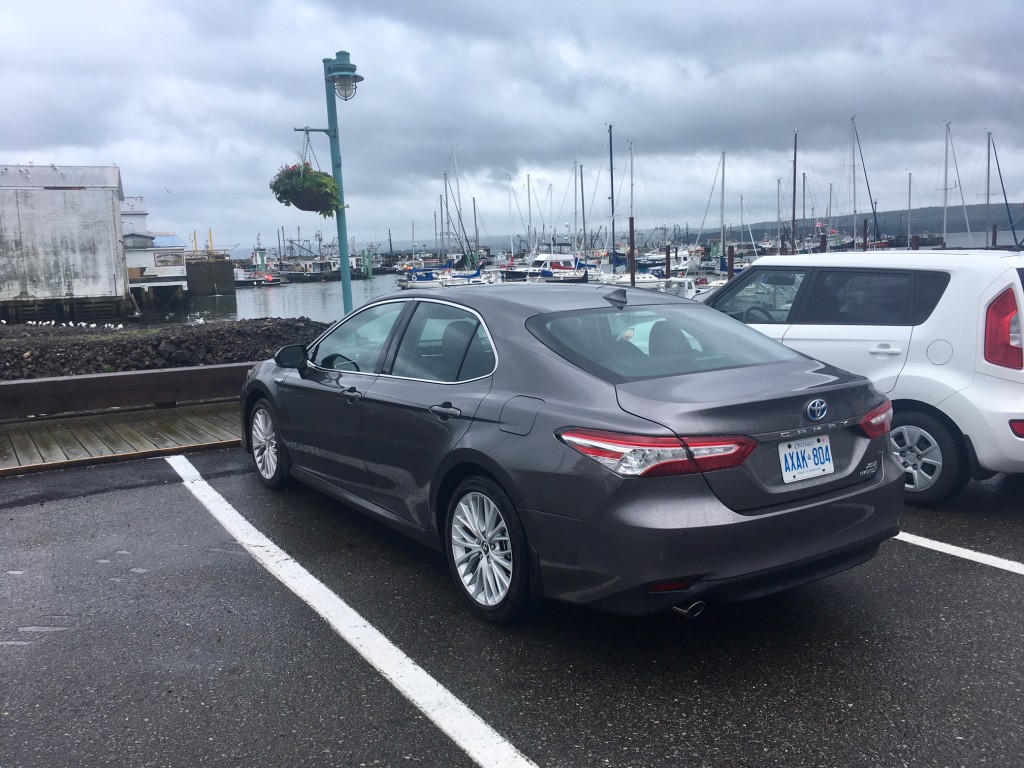 Don’t think for a moment that this is just some wafty Lincoln Town Car like ride, however. That low stance means the Camry hybrid can hold its own in the twisties, as I later found out on the drive back, where we took the curvaceous back-roads instead of the main highway. It is by no means a Porsche 911, but the Camry certainly surprises in this area with its measured control and relative willingness to be tossed around a bit. 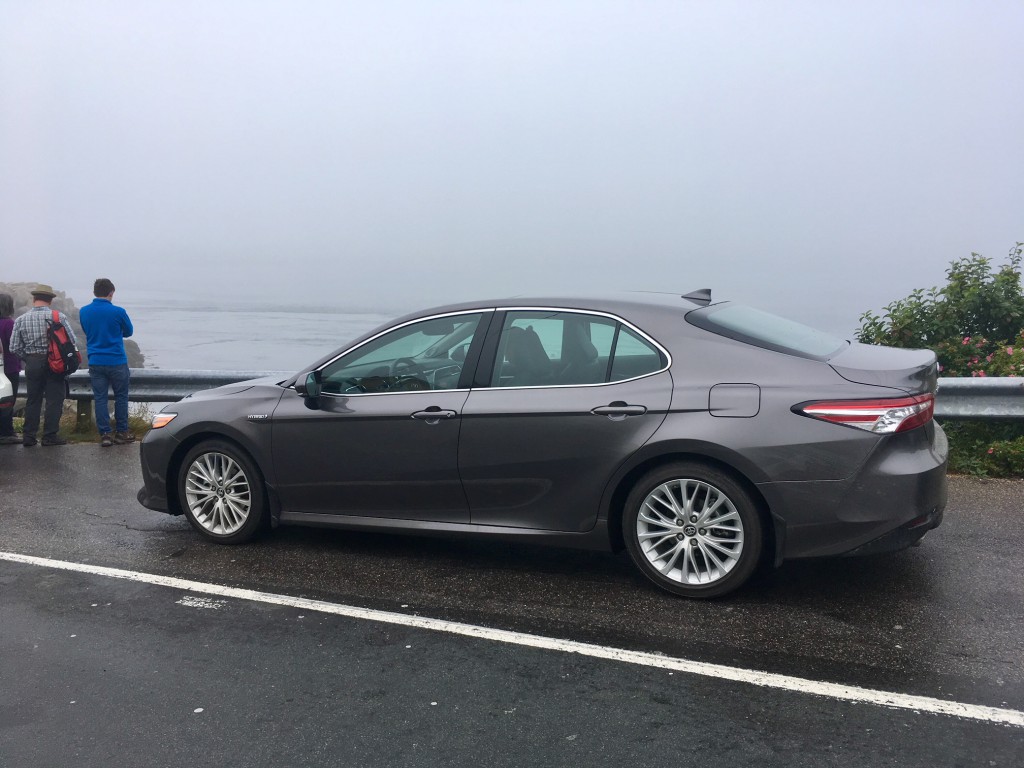 It has three driving modes: eco, normal, and sport which adjusts the responsiveness of the vehicle. I found normal to be the best mode of the three, surprisingly (I guess I’m getting old) though Sport and eco are perfectly livable modes to be in as well. Unless you’re flooring it, it feels close to silent as well in all three modes. 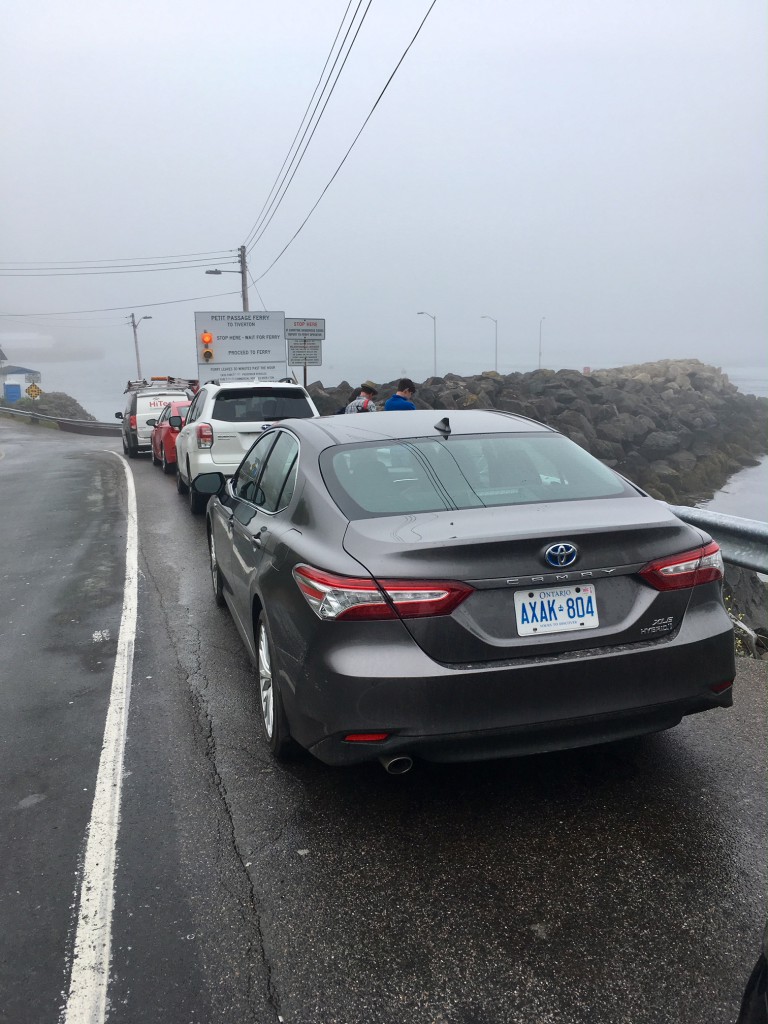 The fuel consumption figures are quite interesting as they cary depending on which trim level you opt for. If you decide to go with the SE and XLE trims, the official ratings come in at 5.3 L/100 kms city and 5.0 L/on the highway. If you chose the base LE trim (meaning, less options and standard equipment and thus, less weight) you’ll net a rather impressive 4.9 city and 4.8 highway. During my week with it, including lots of highway and city driving, I was able to return 5.3 L/100 kms. That is certainly quite good, though just shy of the 5.1 rating for mixed driving. 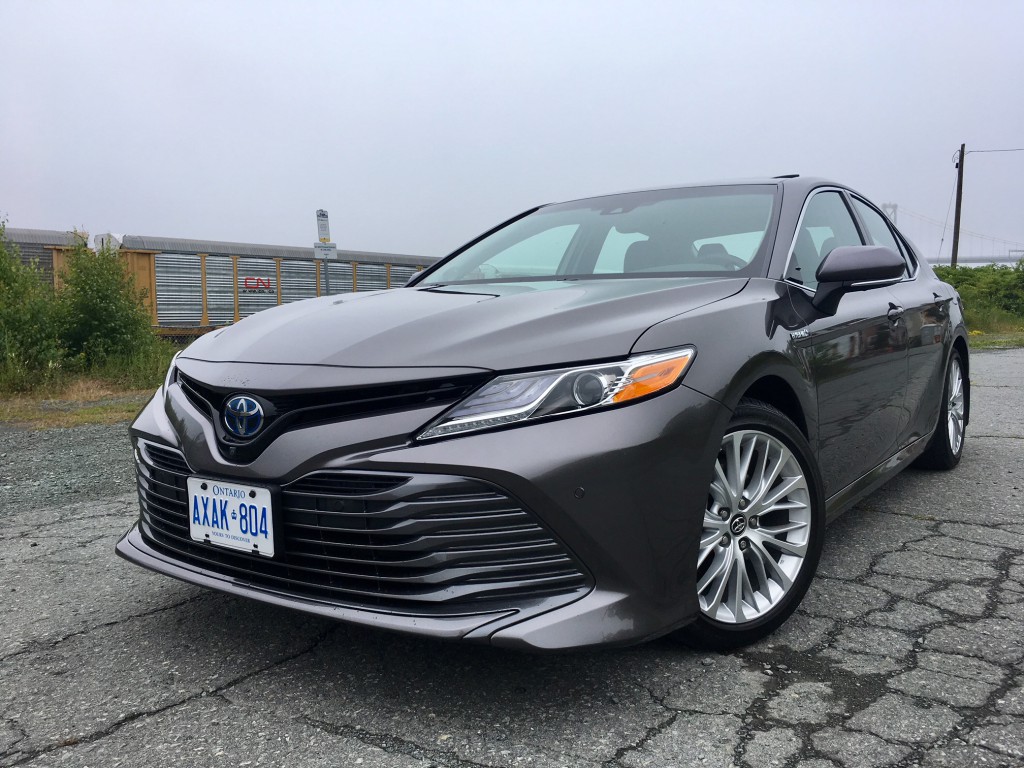 But where the Camry hybrid really shines is when you compare it to its non-electrified brother, specifically the Camry LE. In the hybrid version you would get more power and it feels just as quick off the line, plus the added benefit of better gas mileage. The LE gets a 7.3 L/ 100 kms combined rating while the hybrid LE gets 4.8 combined. For the first time, it seems like it may actually be worth getting the hybrid version over the standard gas version as it seems to be measurable better in almost every way.

And indeed the Camry itself is measurably better. A lot better. Business execs who wish to convey an image of caring for the environment will be quite pleased with this new Camry hybrid, and I’m thinking you will too.