Prior to our trip to the Canadian International Auto Show this year, I shopped around to see what sort of press vehicles would be available to use during our journey.

To my surprise, still available was a Jaguar. Naturally I got excited, but then something donned on me. Toronto’s roads have more holes than swiss cheese at the best of times, plus unusually blustery winter weather was the norm in Toronto for weeks prior. Would a rear-drive, low-slung sports car actually be the best choice?

Well no, it probably wouldn’t be. Luckily for me, when I heard back, the Jaguar I was being booked into was the brand new F-Pace – the company’s very first foray into the SUV segment. Those who know me know I don’t have any sort of soft spot for SUVs, but given this one was made by a company known for making impressive performance cars, and given the fact that we had an hour and a half long journey to Ontario’s countryside during our trip, it seemed like a natural choice. I started to get excited. 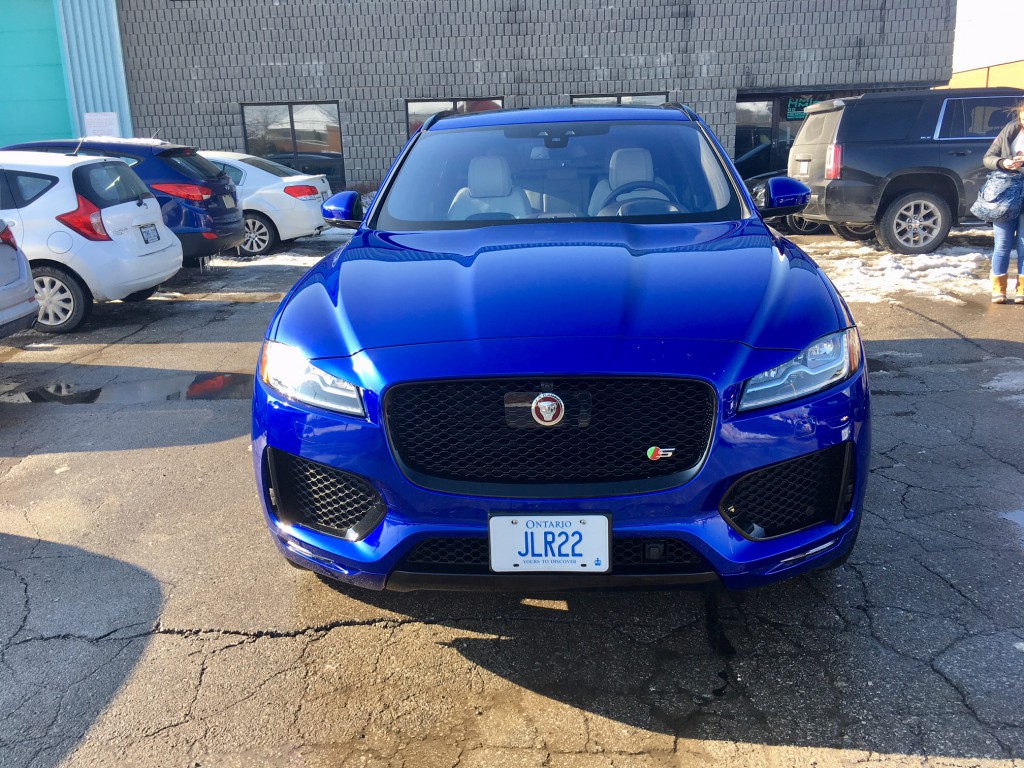 And who wouldn’t get excited over this F-Pace, even if you’re just considering how it looks. There’s only so much you can do with the shape of an SUV but Jaguar nailed it from every angle. Perhaps the best angle is straight on from the front. Some folks don’t like this new corporate look with the large mesh grille and squinty headlights, but I think it looks fantastic. Sure, there’s no ‘leaping cat’ fixed to the hood, but every company should at least have a go at modernizing themselves. My tester’s Caesium Blue paint along with optional 20-inch wheels in black (22’s are also available if you are feeling daring) really helped it to stand out even more. Jag smartly stole the tail light design from the hotted up F-Type coupe to help complete the look. The F-Pace is bigger than it looks and its ride height is on the higher side of the spectrum. Still, there were no issues in getting in or out of it. 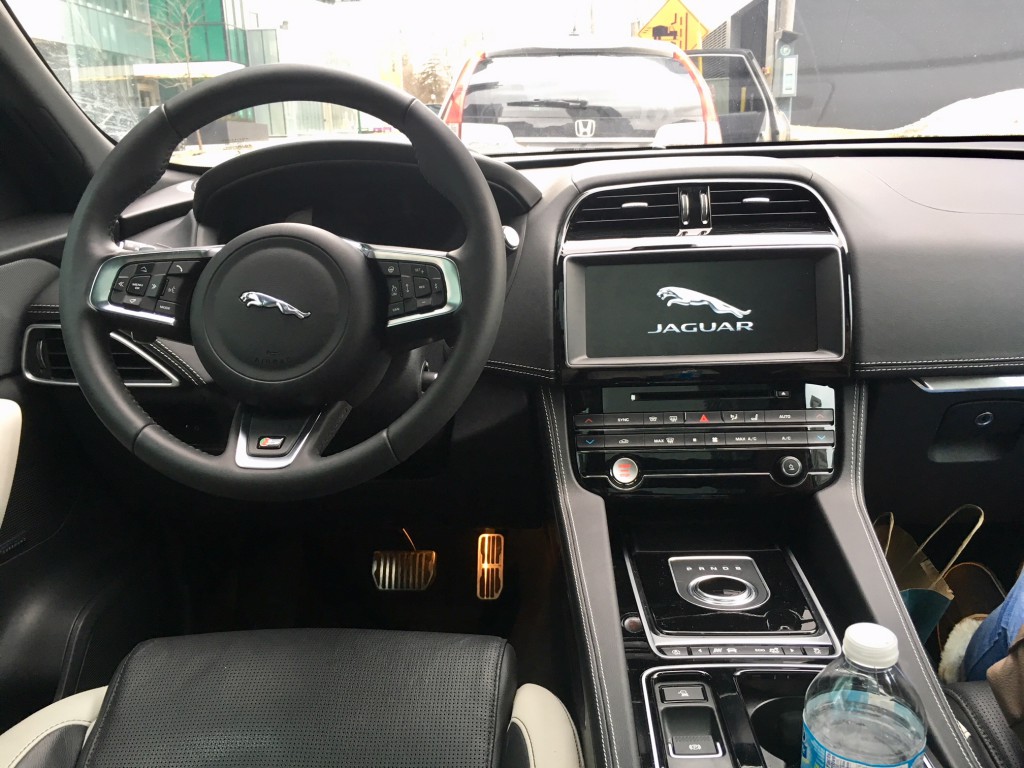 Once inside you’ll be greeted by an attractive, if a bit restrained cabin design. Perhaps the biggest party piece is the electronic gear selector which raises up as soon as you hit the start button. It’s good for lots of Ooo’s and Aaaah’s but otherwise it’s a bit gimmicky.

A lot of its functionality is housed within the infotainment system which isn’t ideal. For instance, putting on the heated seats, is a two-step process which takes your eyes off the road for longer. Happily though, there’s no mouse-like pad or knob tucked between the front seats to operate it. While it’s not the most responsive system I’ve ever used, it gets the job done 8 times out of 10. 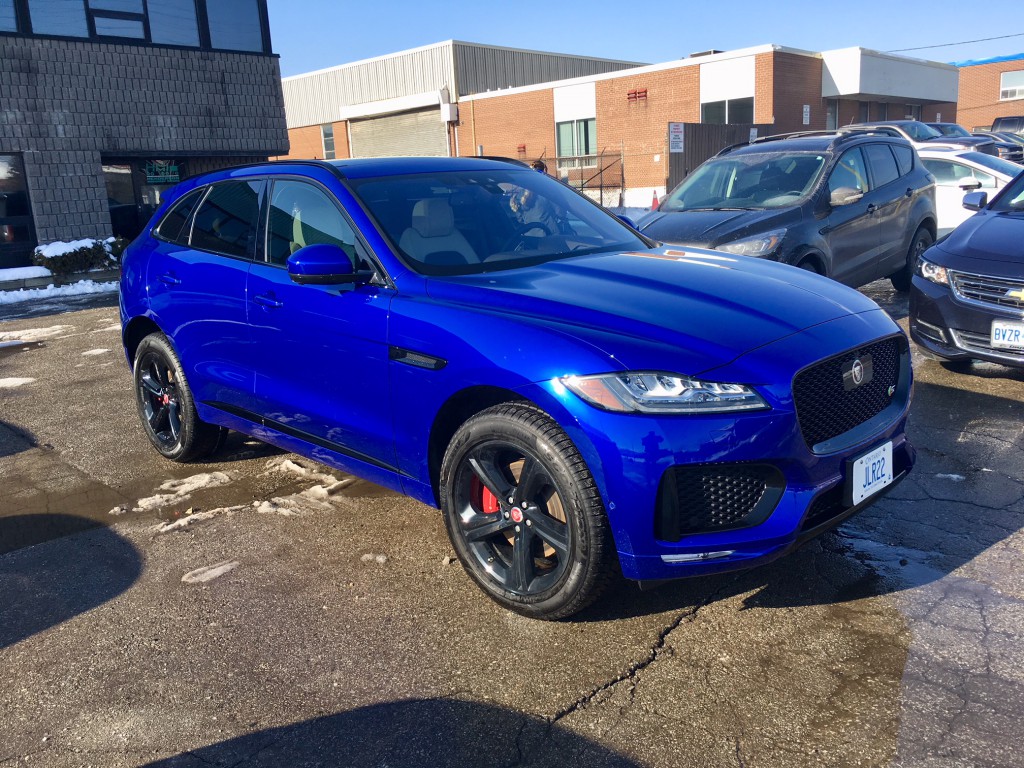 One neat feature is the available “Activity Key” which takes form as a wrist band, similar to a Fitbit. This allows you to lock, unlock and start up the F-Pace without the actual key fob. This would be good if you’re out for a run, or going for a swim and don’t want to fumble around with carrying a bulky key fob. Even if you leave the key fob in plain sight inside, the use of the Active Key disables the key fob so would-be car thieves won’t be able to take off with your wheels as easily as they may have thought. Still, I wouldn’t keep the fob in plain sight, just so you don’t need to deal with a smashed window. 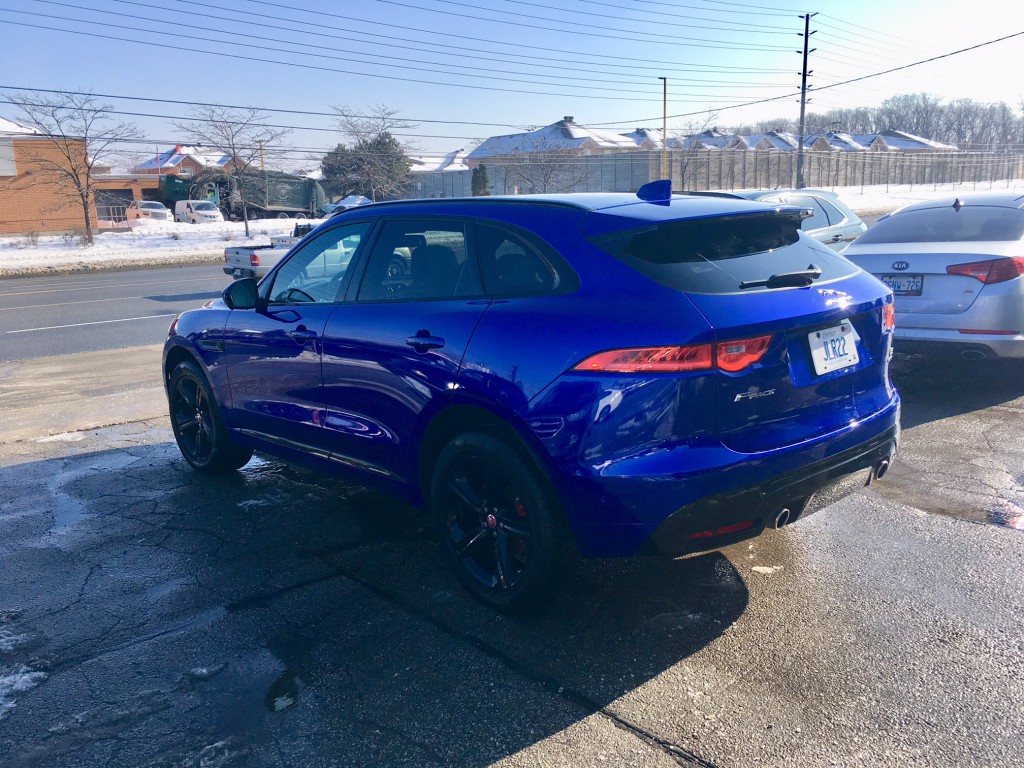 Space-wise, the F-Pace holds its own with plenty of room up front and adequate room in the back. Most would find it perfectly suitable but it should be said that a lot of the F-Pace’s rivals offer more interior room. Cargo room comes in at 508 L with the seats up and easily swallowed our three carry-on bags, my fiancée’s purse and two sets of boots. 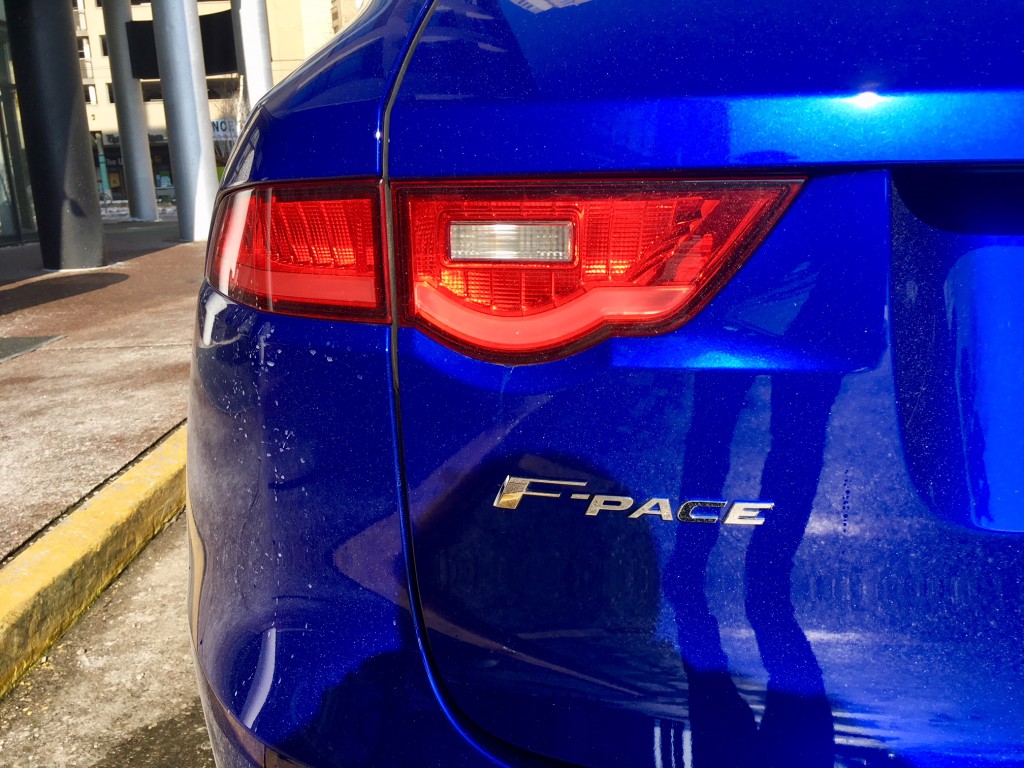 The F-Pace comes with three engine choices, one of which can be tuned differently for increased power making a total of four options. That engine is the 2.0 litre turbocharged four-cylinder which makes either 247 horsepower or 296 horsepower depending on which version you go for. There’s also a 2.0 litre diesel available which makes 180 horses but with 317 pound feet of torque, or you can go with the big boy; a supercharged 3.0 litre V6 which is good for 380 horsepower and 332 pound feet of torque mated to an 8-speed automatic. I actually had the choice between the latter and the diesel and while the diesel would have made more sense for our nearly two hour drive to Arthur, Ontario, asking me to take it over the supercharged V6 is like asking a someone to pick canned tuna over caviar. The end result of going with the V6 is a growl befitting a big kitty. She’s a fast kitty too with 0-100 taking just 5.5 seconds – not bad for a vehicle whose curb weight comes in at just over 4,100 pounds. 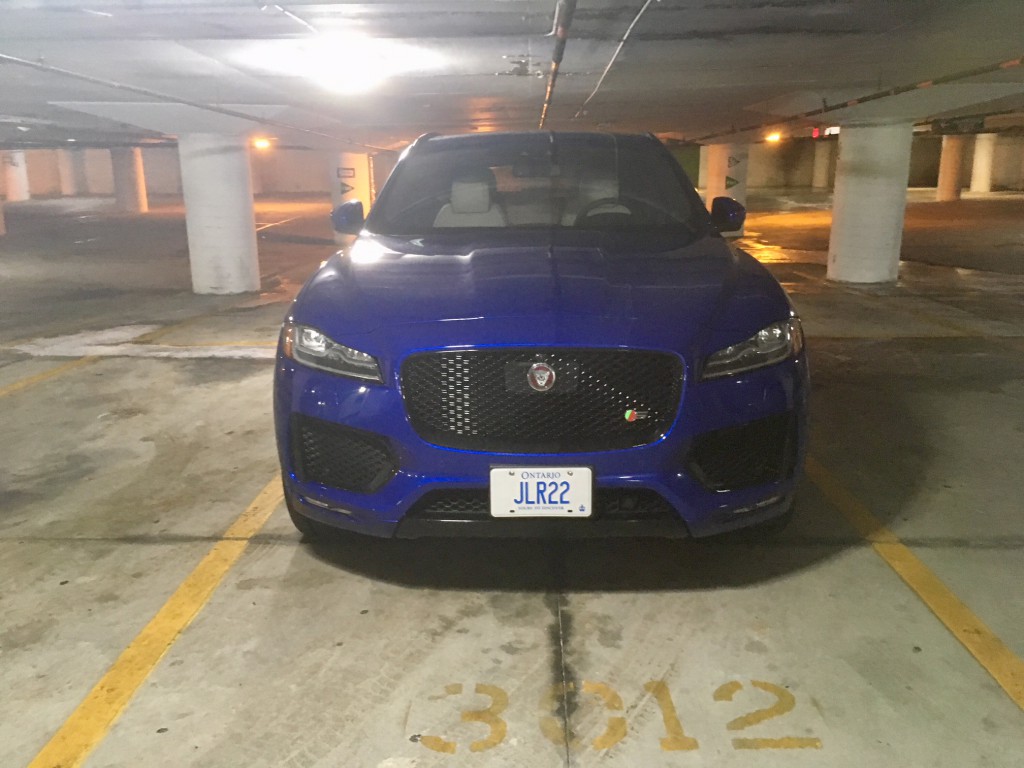 The swiftness of the power delivery largely depends on which mode you keep it in. As you can imagine, I largely kept it in the top-performance dynamic mode for most of my time with it, but normal mode is quite satisfactory as well. Hell, even eco mode doesn’t completely neuter this feline. 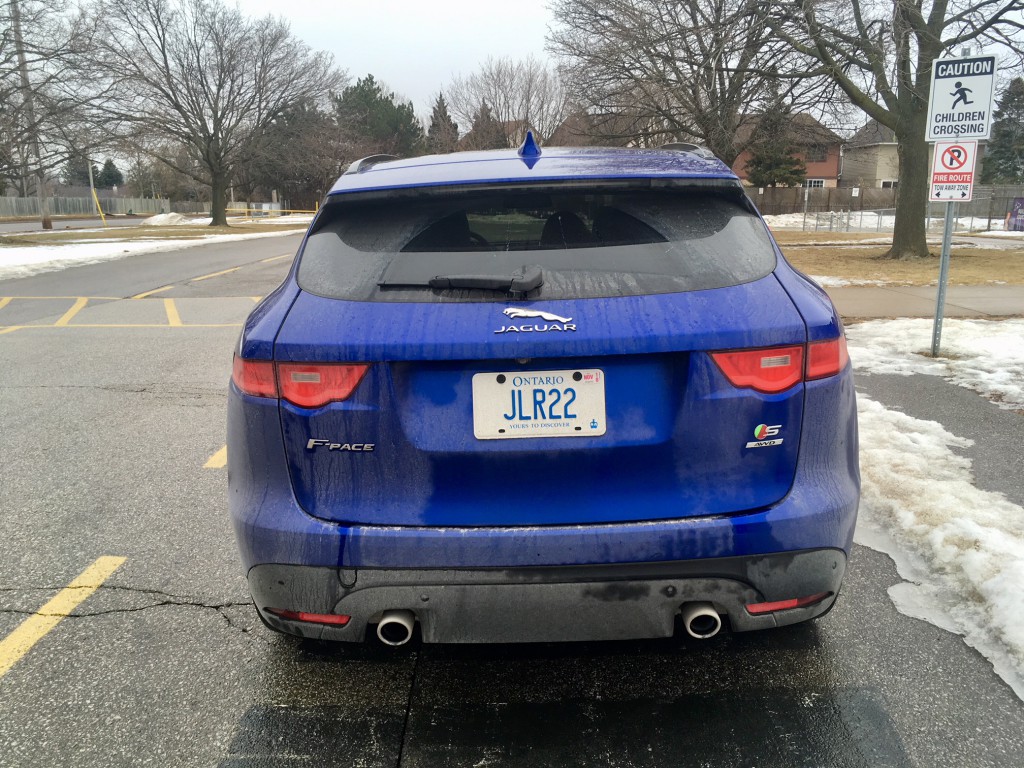 One criticism I do have of the engine/transmission is sometimes the F-Pace seemed to be caught a bit off guard when I wanted more power. There was noticeable lag from the point when I put my right foot down to the point where the transmission reacted to downshift and give it the beans. This wasn’t necessarily remedied in manual mode with the paddle shifters either – though it was less obvious in dynamic mode. Overall though this combo is a treat to experience – there aren’t too many pure supercharged engines around anymore, largely due to their impressive ability to help suck fuel.  And while this is likely the best engine available, a smarter decision would be to opt for one of the 2.0 litre fours or the diesel. Not only is the initial cost lower, but they will be better on gas. 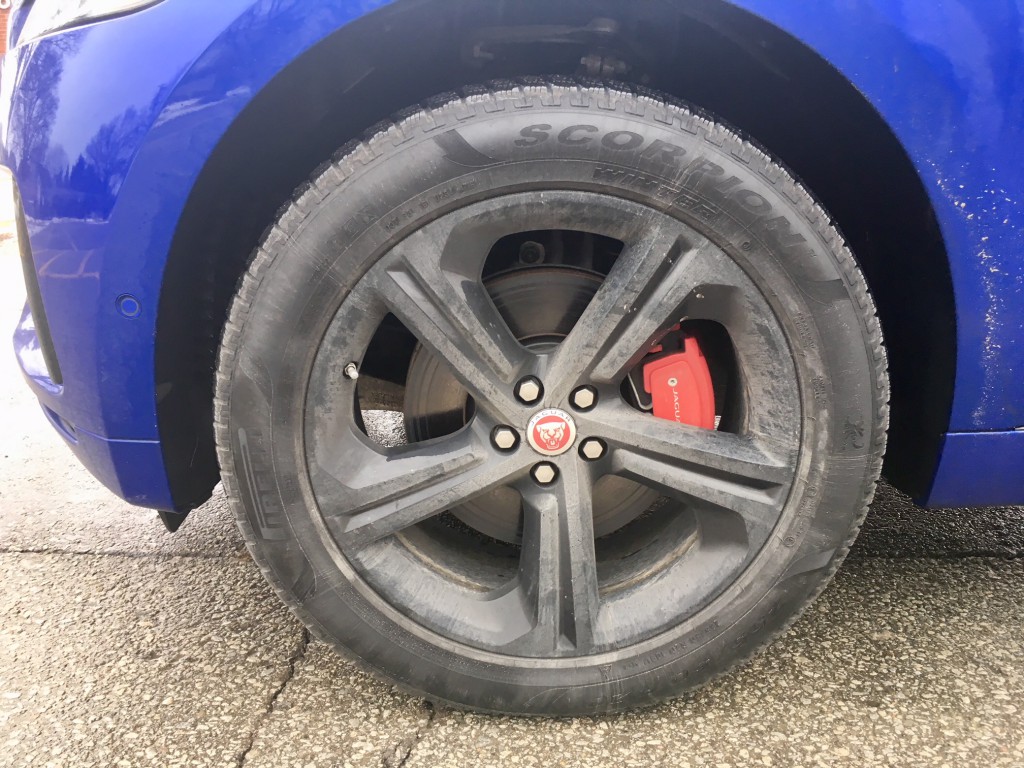 Handling is easily the F-Pace’s forte. As I alluded to earlier, I would take a wagon or a hatchback 10 times out of 10 before I ever purchased an SUV but damn it does the F-Pace ever make a convincing case for itself. I’m struggling to think of an SUV in recent memory that handles this confidently. It stays flat and composed in the corners and almost dares you to push it harder.

Of course, there is always a price to pay for a high performing vehicle and while the F-Pace won’t cause frequent visits to your chiropractor, it certainly can’t be described as Lexus-like comfort. My tester’s 20-inch wheels did an okay job soaking up the bumps and potholes, but you may want to consider downsizing if comfort is a priority. 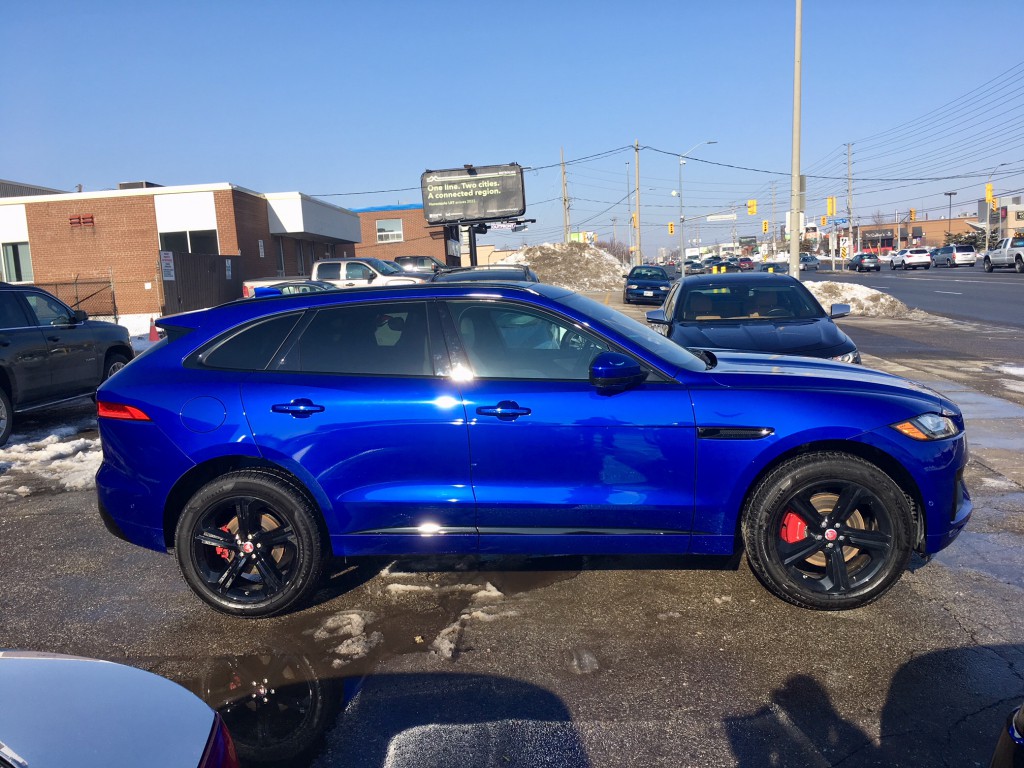 Officially the F-Pace V6 comes in at 13.3 L/100 kms city and 10.0 highway when it comes to fuel consumption. With a good mix of highway and city driving (which included being stuck in Toronto’s infamous traffic jams numerous times), I was able to return 11.5 L/100 kms in real world driving. Not bad considering it was early February. Those traffic jams didn’t get many chances to waste the F-Pace’s gas by idling – it has a start/stop feature which automatically cuts the engine off while stationary and starts it again when you take your foot of the brake. It’s not the most refined system in the world but it gets the job done. 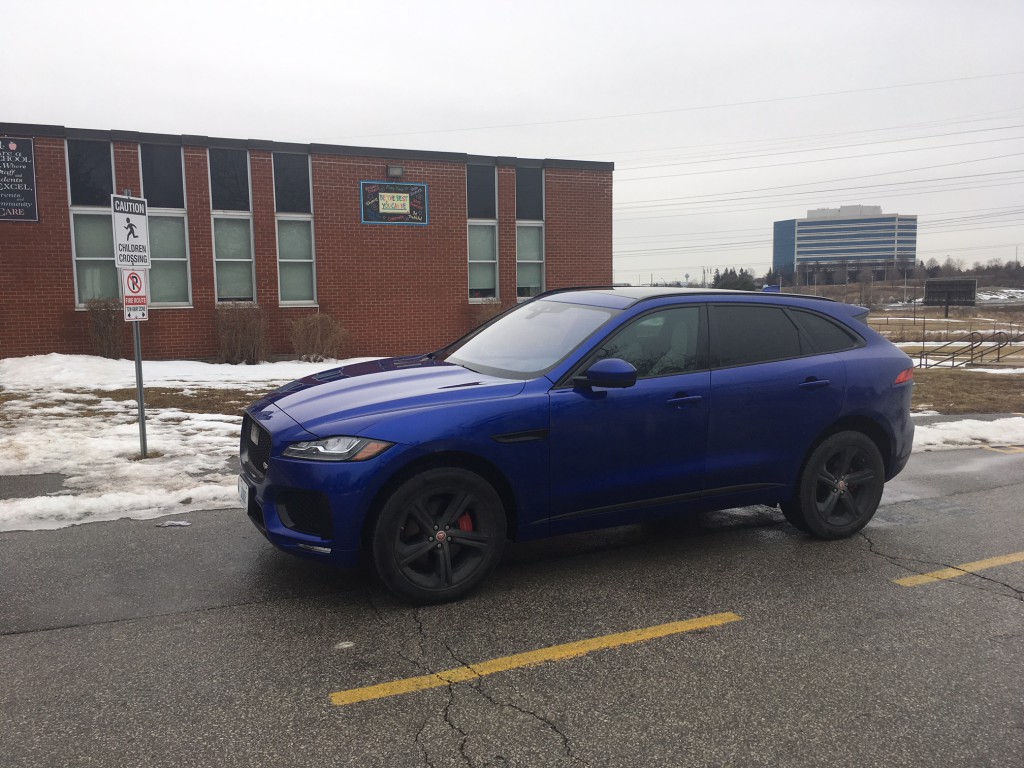 And I have a feeling that’s what most F-Pace owners are likely to say; it gets the job done – at least the job of tackling daily tasks with ease, which is something Jags of the past may have struggled with.  The most versatile Jaguar can also hold its own against performance SUV rivals as well and with a number of different engines to choose from, getting your perfect F-Pace should be a breeze. That is, if you survive the sticker shock.