When I found out Hyundai Canada was sending an Elantra GT my way for evaluation, I got pretty excited. In my mind, I was going to be able to test the Sport model with, hopefully, a manual transmission.  The Elantra GT Sport was developed, according to Hyundai, at Germany’s famous Nurburgring, which made it even more appealing. Besides, I had the chance to drive the Elantra Sport this past spring and came away quite impressed.

Then the car arrived. It wasn’t the Sport version I was hoping for. Instead, it was the more mundane middle-of-the-road GLS trim with an automatic and an engine that has 39 less horsepower than the Sport and 45 less pound foot torque. In other words, this is the Hyundai Elantra GT that your mom buys. 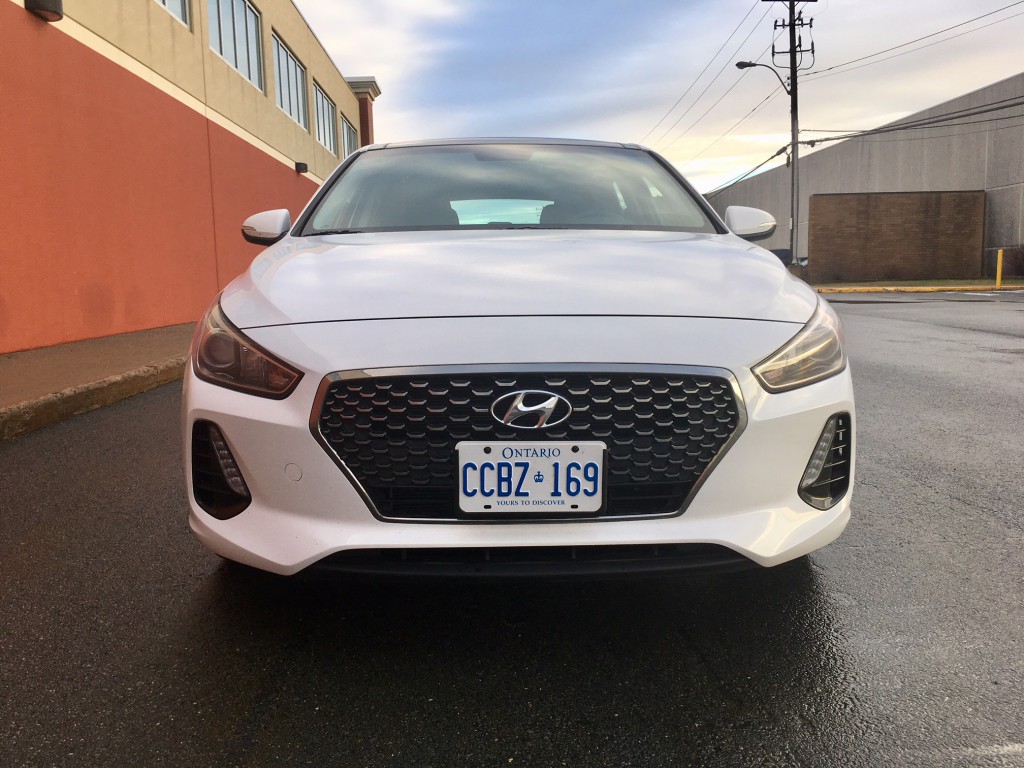 I was disappointed. And that disappointment continued as I examined the vehicle up and down. This common shape gets lost in a sea of hatchbacks with nothing really notable to mention. Sure, the new grille and front fascia looks decent, but the generic taillights along with a predictable side profile and ordinary looking wheels doesn’t do a whole lot for me. The previous generation Elantra GT was much more interesting to look at with swoopy curvaceous style was daring and it worked well.

Surprisingly though, that’s somewhat where the disappointment ended for me because once I stepped inside, it was obvious that Hyundai concentrated their styling efforts on the interior. My tester featured two tone black and white for the seats, which are way more comfortable than they look. 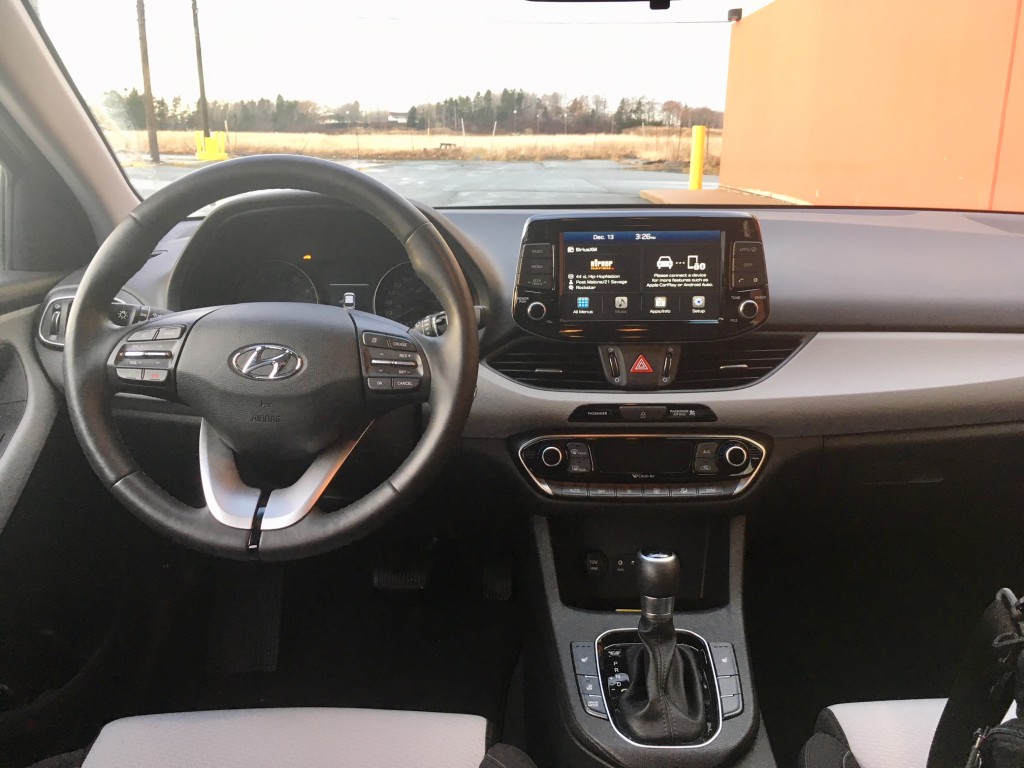 The centre stack design is clean and modern and there are soft plastics where it matters. Yes there are hard plastics on the dash, but that doesn’t bother me much since the dash isn’t an area people tend to often touch anyway.

Being a Hyundai, the GLS comes very well equipped with standard features including a panoramic sunroof, Sirius satellite radio, cross traffic alert systems, automatic headlights, heated seats, a heated steering wheel and more. While the latter two items were greatly appreciated in the middle of December, the heated seats go from zero to scorching real quick and that’s not necessarily a good thing. Best to just keep them on the first setting.

Interior room is adequate, though the rear seats are noticeably smaller than in the Elantra sedan. My fiancée commented that the Elantra felt more cramped than the Honda Fit I tested a few weeks back, but agreed the space would work for most. With over 700 litres of cargo room behind the rear seats there will certainly be no worry of a lack of space (that figure is only bested by the Honda Civic hatchback). 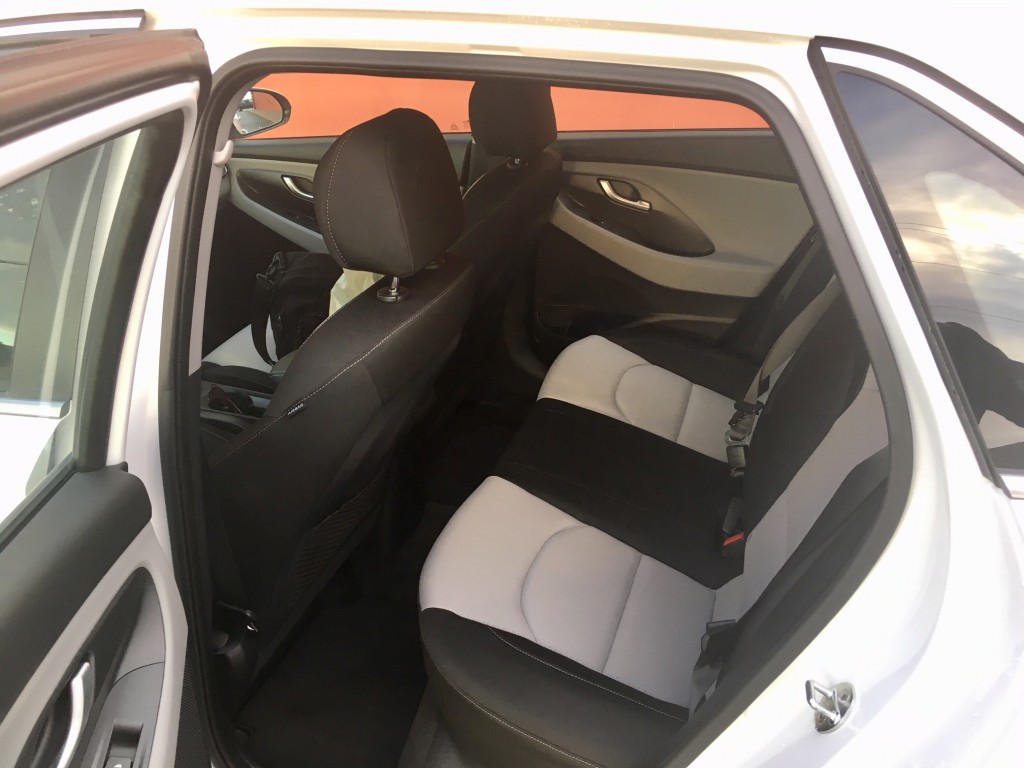 Even though it didn’t have the turbocharged 1.6 litre I was hoping for, it must be said the 2.0 litre 4-cylinder is a fairly strong engine producing 162 horsepower and 150 pound feet of torque. You get your choice of a six-speed manual or a six-speed automatic. The end result as a vehicle that can propel itself a tad quicker than most in the segment, but it’s not as if you will be winning any drag races either. There are three drive modes: eco, normal and sport. Sport opens up the throttle a little more while normal feels, well, normal. The big surprise was eco mode. Typically vehicles in eco mode feel completely neutered and held back. It completely ruins the driving experience in the name of fuel efficiency. But this is the first vehicle I’ve driven in eco mode which didn’t feel like it was holding the engine and transmission back all that much, if at all. There was still plenty of pep to be had if you needed it. This is either a good thing or a bad thing depending on how you look at it, which I will get to in a moment. 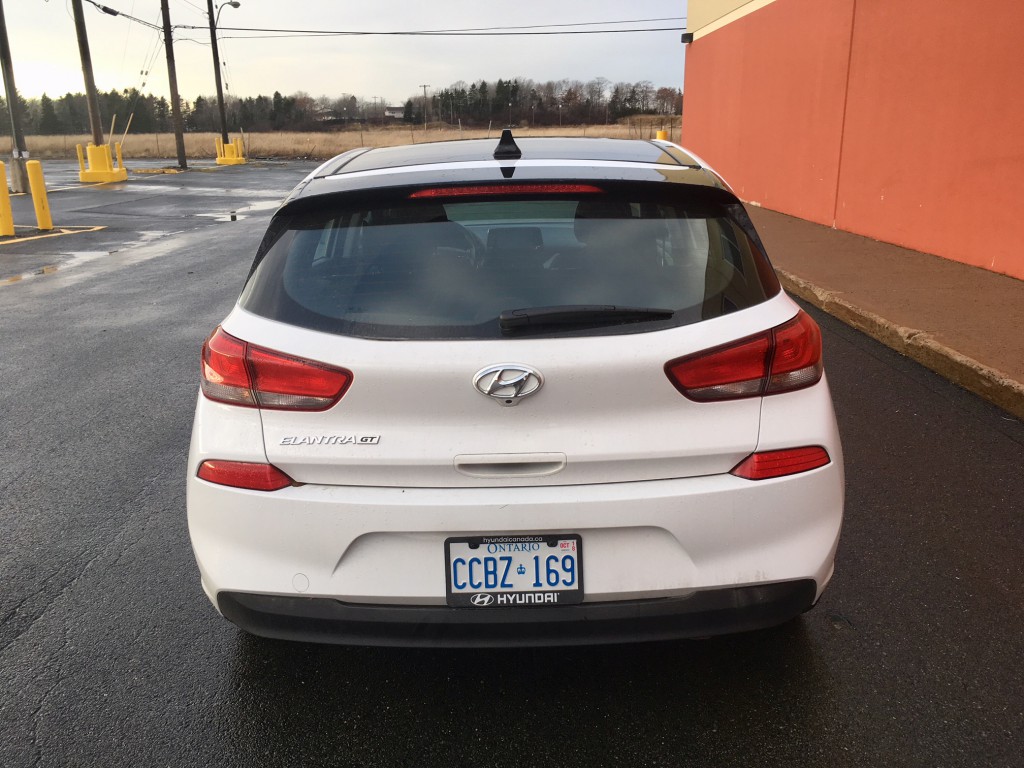 Another reason I wanted to try the Elantra GT Sport is due to the set up underneath. It boasts a multi-link suspension which helps make it more fun to drive. The GLS’ on-road mannerisms weren’t necessarily impeded by the less capable torsion-axle rear suspension, but if fun is what you’re looking for, go for the Sport. That isn’t to say the GLS can’t be flung into a corner with relative confidence, but make no mistake, it isn’t a serious performer in the bends either. The suspension set up is otherwise comfortable on bumps and other road imperfections and it doesn’t have the ‘hollow’ feel of Hyundais of the past. 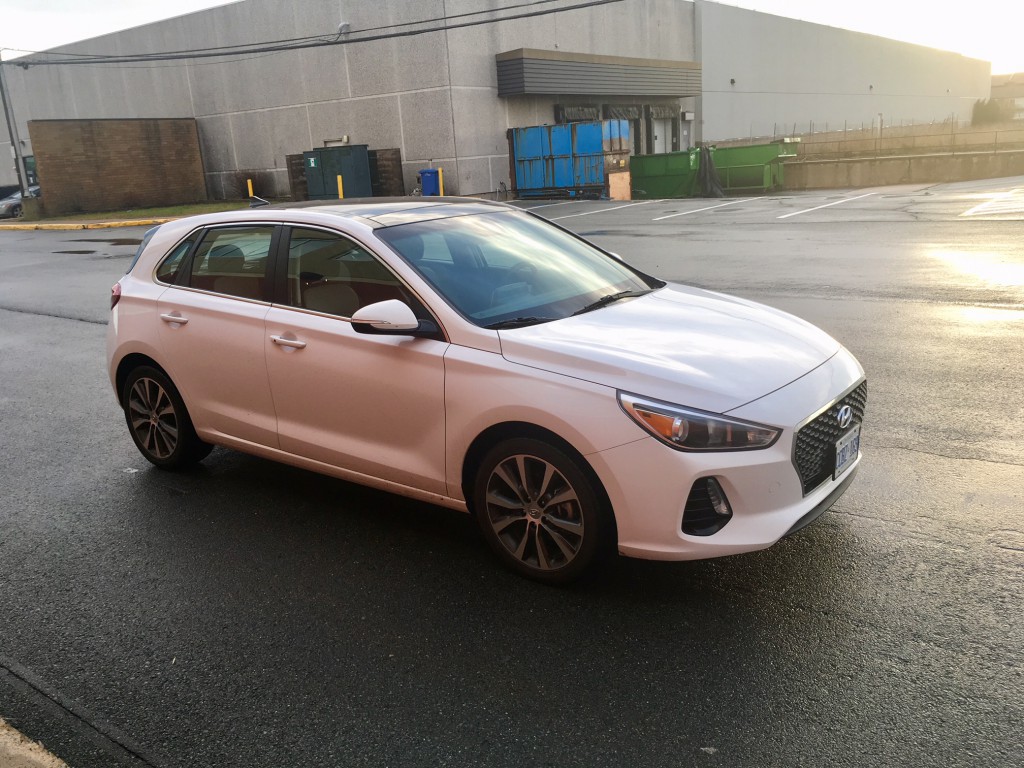 It is has good visibility and a tight turning radius making it a breeze to park in tight spaces and lots. Turning the wheel itself produces and odd and off-putting whining sound though which suggests it doesn’t much like the cold.

Now let’s get back to that Eco mode. Officially, the Elantra GT GLS is rated at 9.4 L/100 kms city and and 7.2 highway. I kept it in Eco mode for 80% of my time with it and returned 8.4 L/ 100 kms. That of course isn’t bad, but I can’t help but wonder if it would have done better had the Eco mode be set up a bit more traditionally. Personally, I like that the Elantra GT can still perform decently while in Eco mode, but it’s likely that the type of consumer who will buy this car sets fuel efficiency as a higher priority. Besides, the much bigger Honda Accord I drove two weeks ago landed at 8.0 L/100 kms and I didn’t even keep it in econ mode all that much. 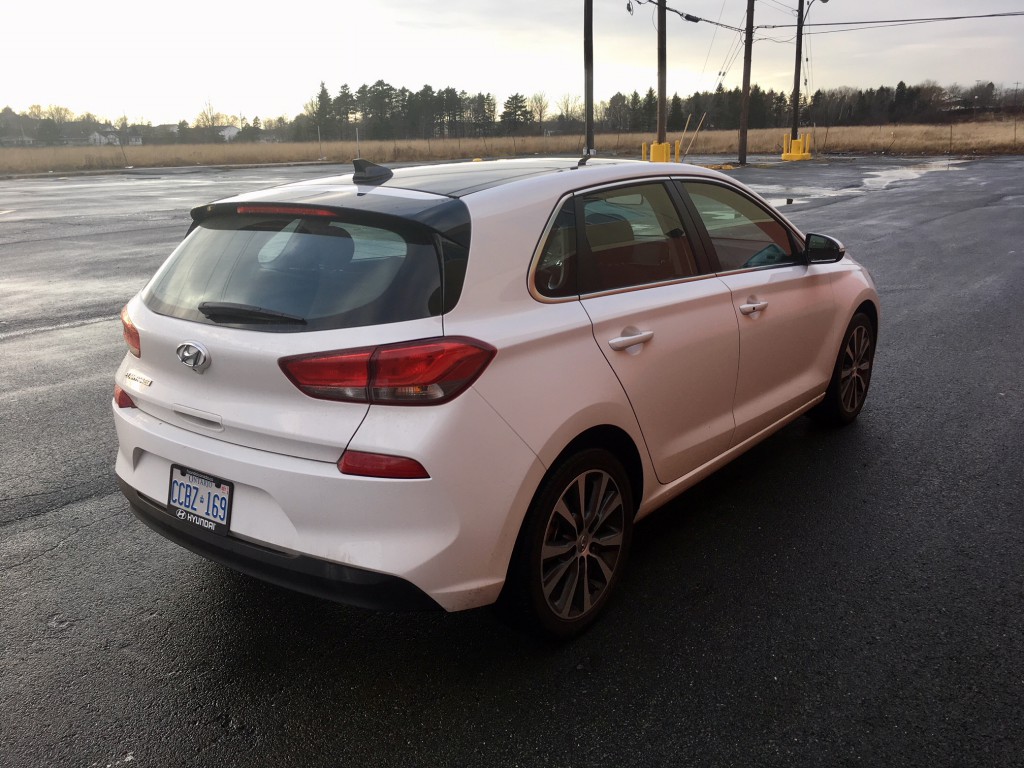 But overall, my original disappointment of not being handed the keys to the Sport version of Hyundai’s newest hatchback simply faded away. As per usual, Hyundai absolutely slays the competition when it comes to value. There’s also no serious lack of power, the ride is decent and the interior is quite attractive.

But performance nuts like me will be disappointed with it. Surely the Sport version warrants an evaluation as well, right Hyundai Canada? Stay tuned (excuse the pun). 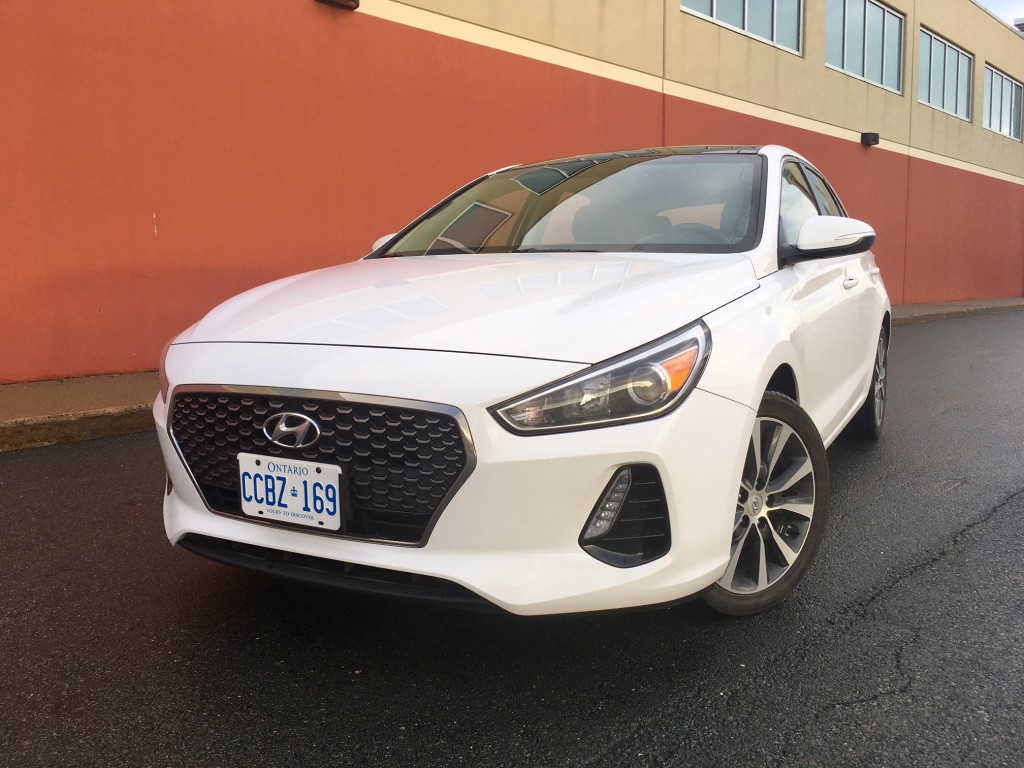