Usually auto manufacturers send all-new vehicles or significantly updated models each week for me to try.

However, Ford decided to buck the trend and send me a vehicle that hasn’t been significantly updated since 2013 and around since 2008; the Flex.

And to make it even more puzzling, Ford has no plans of producing the Flex beyond 2020.

It isn’t as if auto writers haven’t had any seat time in one before either. I had the opportunity to try a 2013 model year, after all.

Surely a Focus RS, one of the many combinations that can be had of an F-150 or literally any Lincoln product would have made a bit more sense.

There are some that think the Flex makes no sense in the first place. 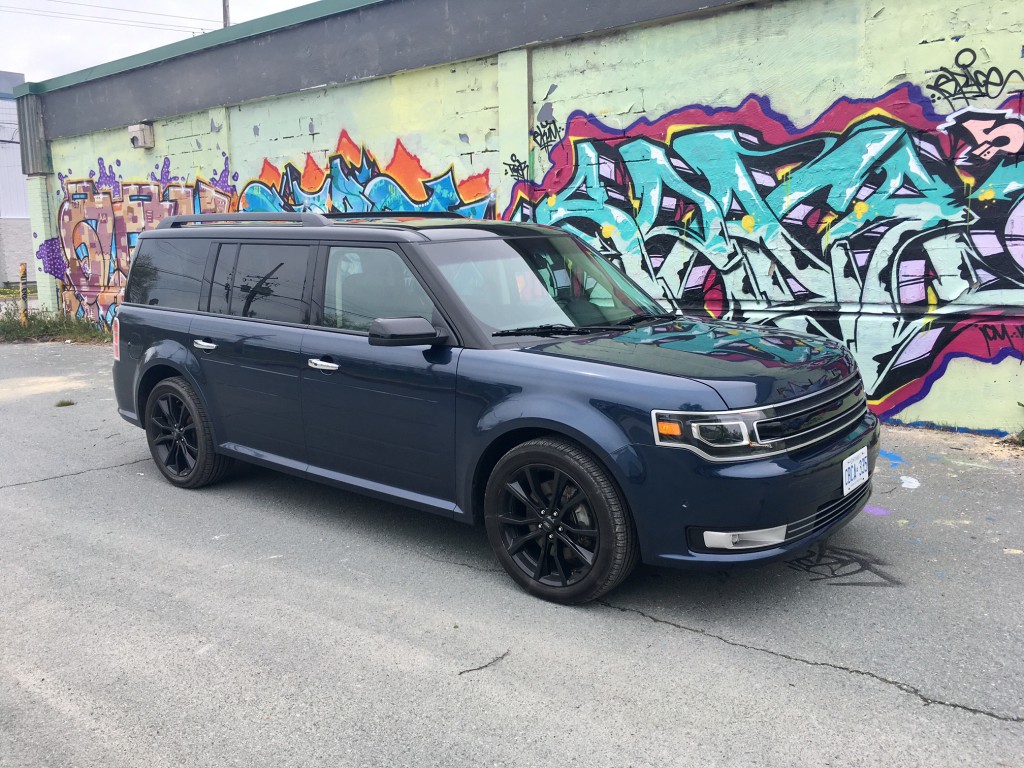 When it comes to style, the Flex certainly goes against the grain of swoopy lines and four door coupes. Though the lines have been softened on the front fascia a bit, the rest of the Flex looks like it was designed only by a ruler.

Optional black 20-inch wheels, new paint colours and black trim being available help to keep the Flex a bit more fresh looking, but as designers of the Mini Cooper, Nissan Juke and Volkswagen Beetle are now finding out, it’s difficult to keep a quirky design modern.

Despite the few visual upgrades, the Flex doesn’t stand out as being particularly appealing. 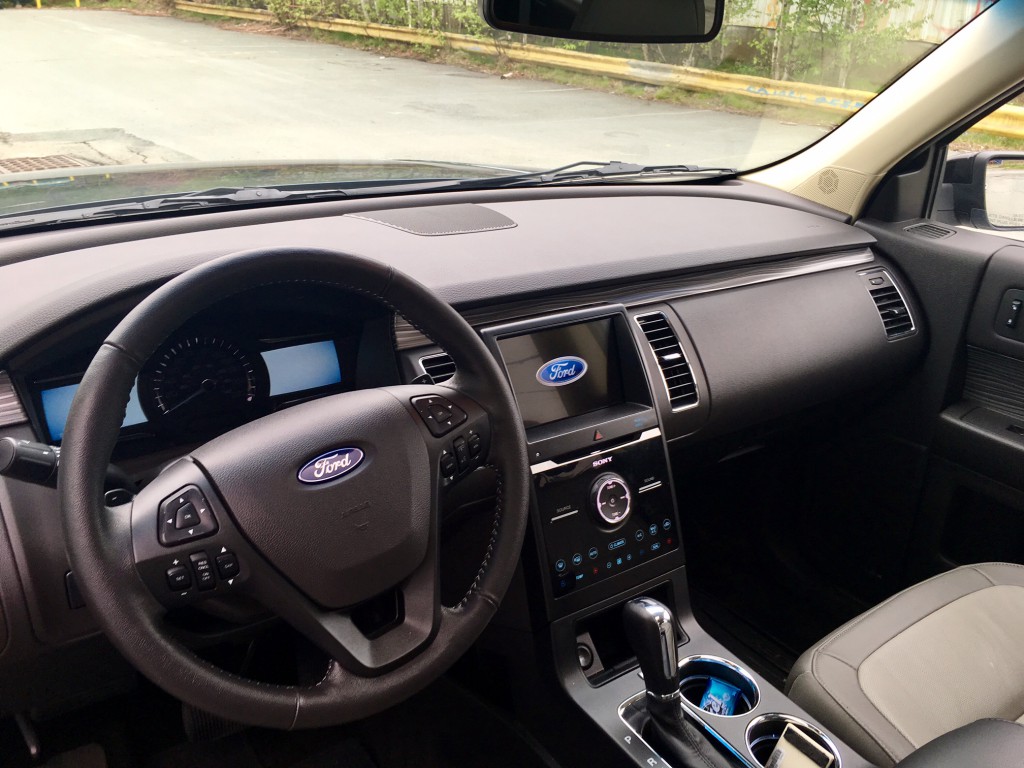 Likewise, it feels like you’re stepping into a 10 year old Ford product. It has the old steering wheel design, old turn signal stalk, old shifter and old centre stack. The latter still uses capacitive touch buttons, something Ford rightly remedied in the Fusion not too long ago.

Thankfully, the infotainment system has been upgraded which means you’ll no longer be subjected to the often problematic MyFord Touch system. Now, a crisper looking Sync3 can be had which has quicker response times and a neater layout. It still isn’t perfect but it certainly way less enraging.

The Flex offers three rows but unless you’re physically more youthful than others, you’ll likely want to keep adult humans out of the third row for longer trips. If you’re looking for a ride that can transport many passengers, the Flex will make do in a pinch, but a minivan is still the best choice for passenger accommodation. 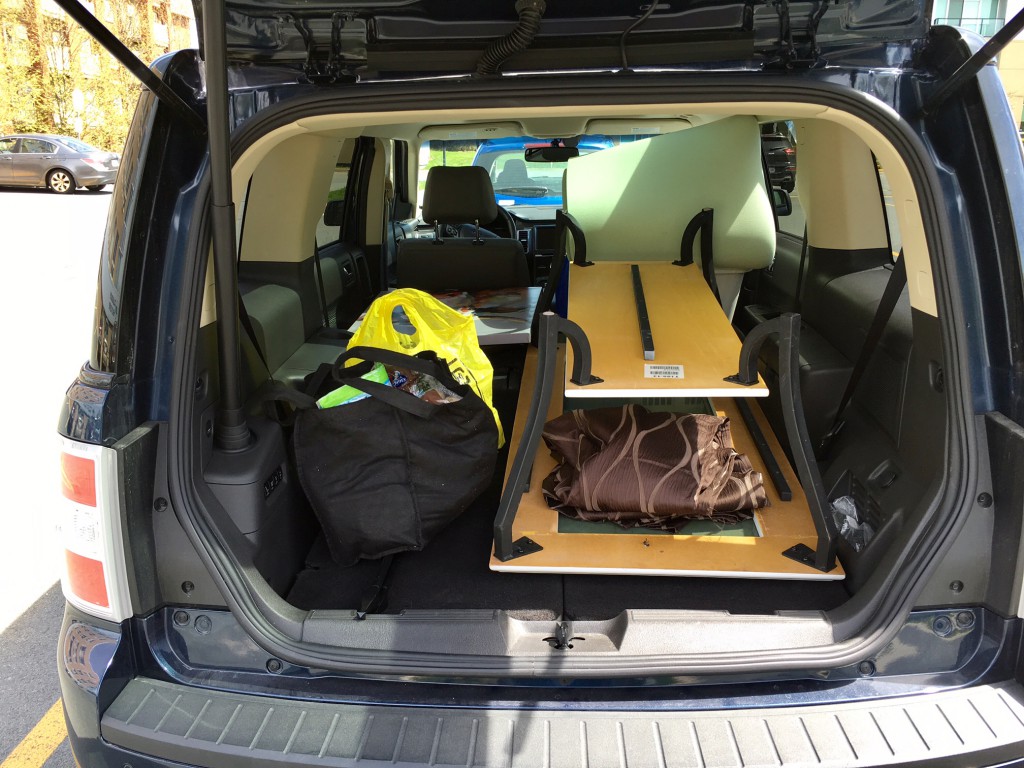 Thankfully, the Flex is still quite spacious inside for cargo. With all rows up you get a relatively deep 566 litres of space. With the push of a button, the third row can automatically store itself into the load floor. If you want the second rows down, you’ll have to use good old fashioned manual labour, but once they are also folded – which reveals a completely flat floor by the way – you’ll get a whopping 2356 litres.

It turned out to be a great week to be scheduled into the Flex because I was able to test out the its max cargo abilities by helping my girlfriend move. While her brother’s GMC Sierra had to take care of her couch and bed, the Flex was able to swallow everything else in just two trips. 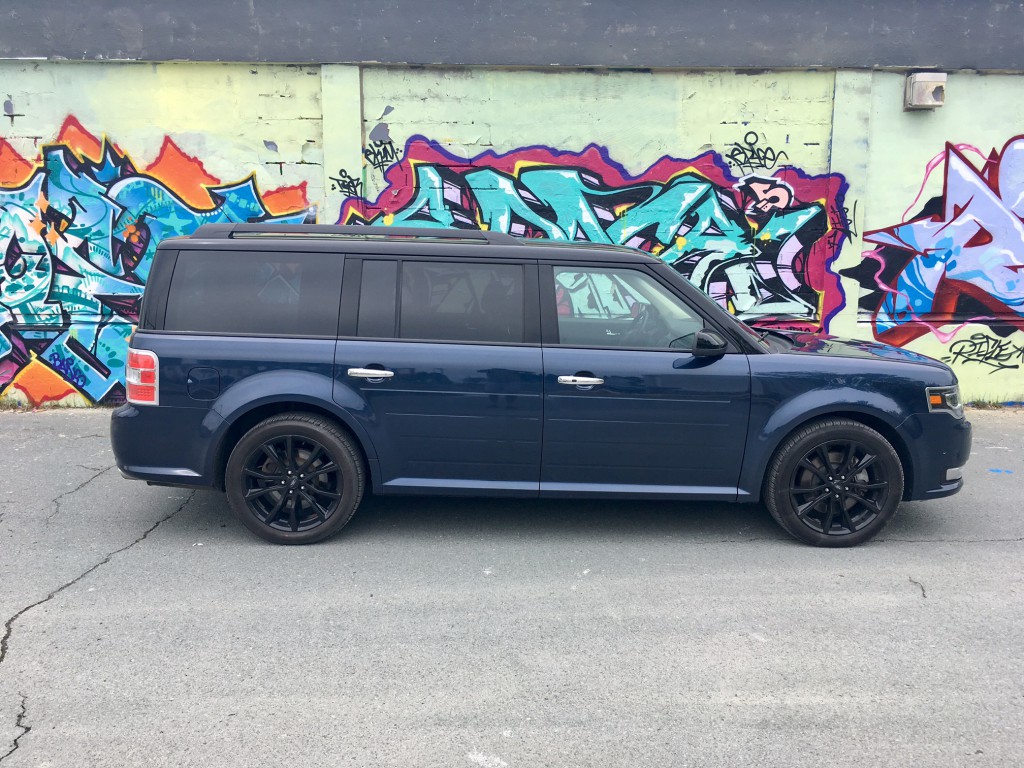 The end result is a zero to 100 time of just over six seconds which is impressive. From a stop, there is some slight turbo lag that needs to mentally prepare itself to haul all that heft, but once it gets going, it gets going. The six-speed auto does its job adequately and while there is some torque steer, the Flex is fairly manageable at higher speeds. It is particularly brawny on the highway. Passing is an absolute breeze. 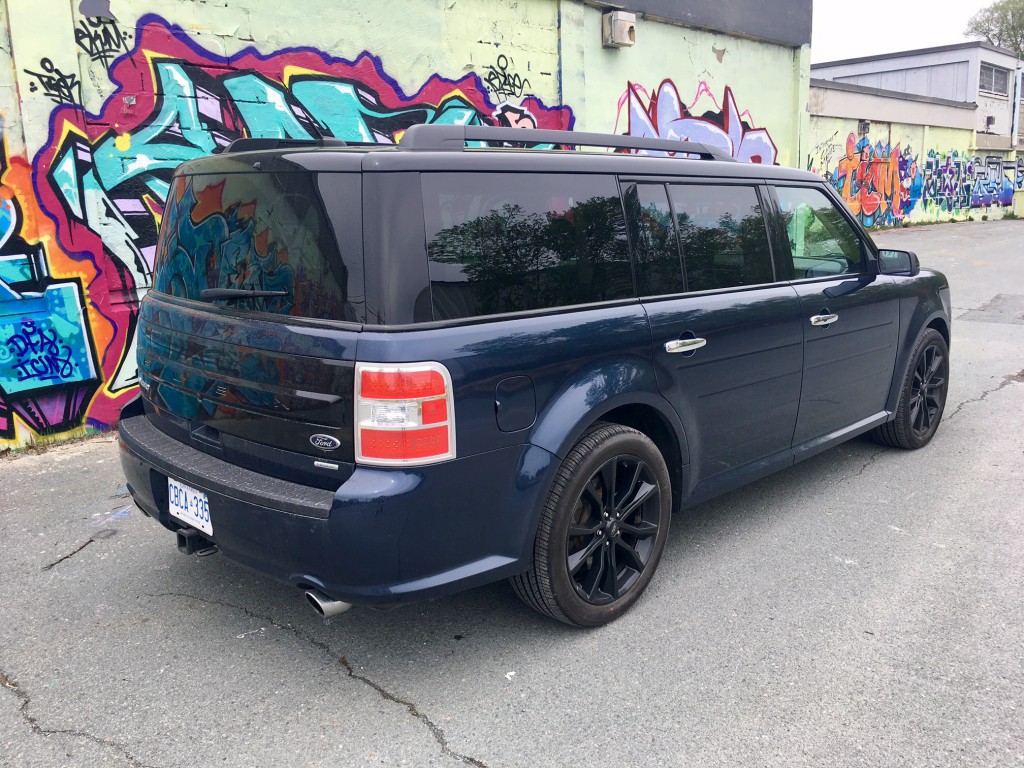 It’s comfortable on the highway and it’s boy shape doesn’t translate into an abundance of road noise, though it is a bit more noticeable with the radio turned off.

Cornering isn’t this vehicle’s forte. It’s rolly polly attitude in the corners combined with little feedback from the steering means you should probably look at Ford Edge Sport if you want a crossover that performs in the bends. The Flex is more of a comfortable highway cruiser that can be awakened and lively at just about any speed.

The design of the Flex means the windows are all quite large making it very easy to back into a parking space or parallel park. It also comes with a host of safety aids to make sure you stay out of a ditch or sideswipe a motorcycle on the highway.

That, matched with a low step in height and a system that will parallel park the Flex for you makes city driving a synch. 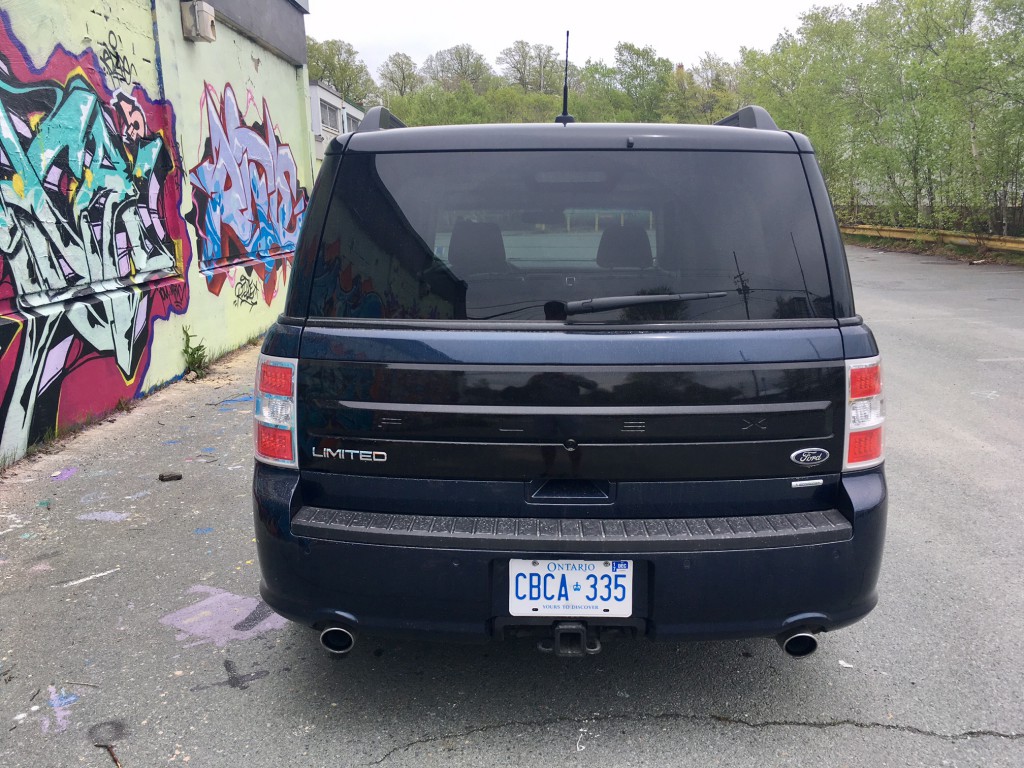 Officially rated at 15.7 L/100 kms city and 11.2 highway, my real world consumption landed at 14.8 by the end of the week. It seems Ford’s Ecoboost technology is more boost than eco. 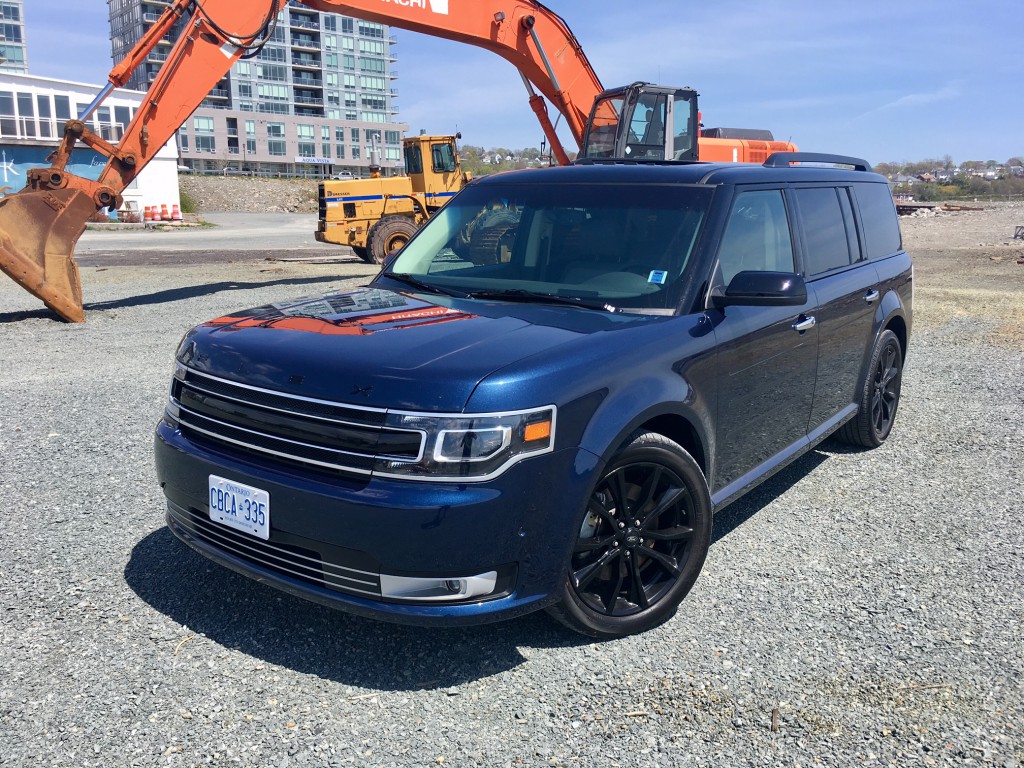 But by week’s end, the Flex certainly grew on me. It has oodles of space for cargo, adequate space for passengers, a nuke under the hood and comfortable mannerisms on the highway. For some people, that’s exactly what they are looking for.

And now I think I know why Ford decided to send this old beast in the first place: to remind us all that, despite some very obvious flaws, and much needed updates, the Flex has its own charm. It’s a bit like that old game of Sonic the Hedgehog you forgot you even still had. There are better video games, and certainly more modern ones, but there’s still much fun to be had playing the old game.

And since Ford wanted to remind us how the Flex’s charm before it gives it the axe, in 2019 there will likely be stellar deals to be had. So it may well be worth your while to wait until then, especially when you see the as tested pricing below.