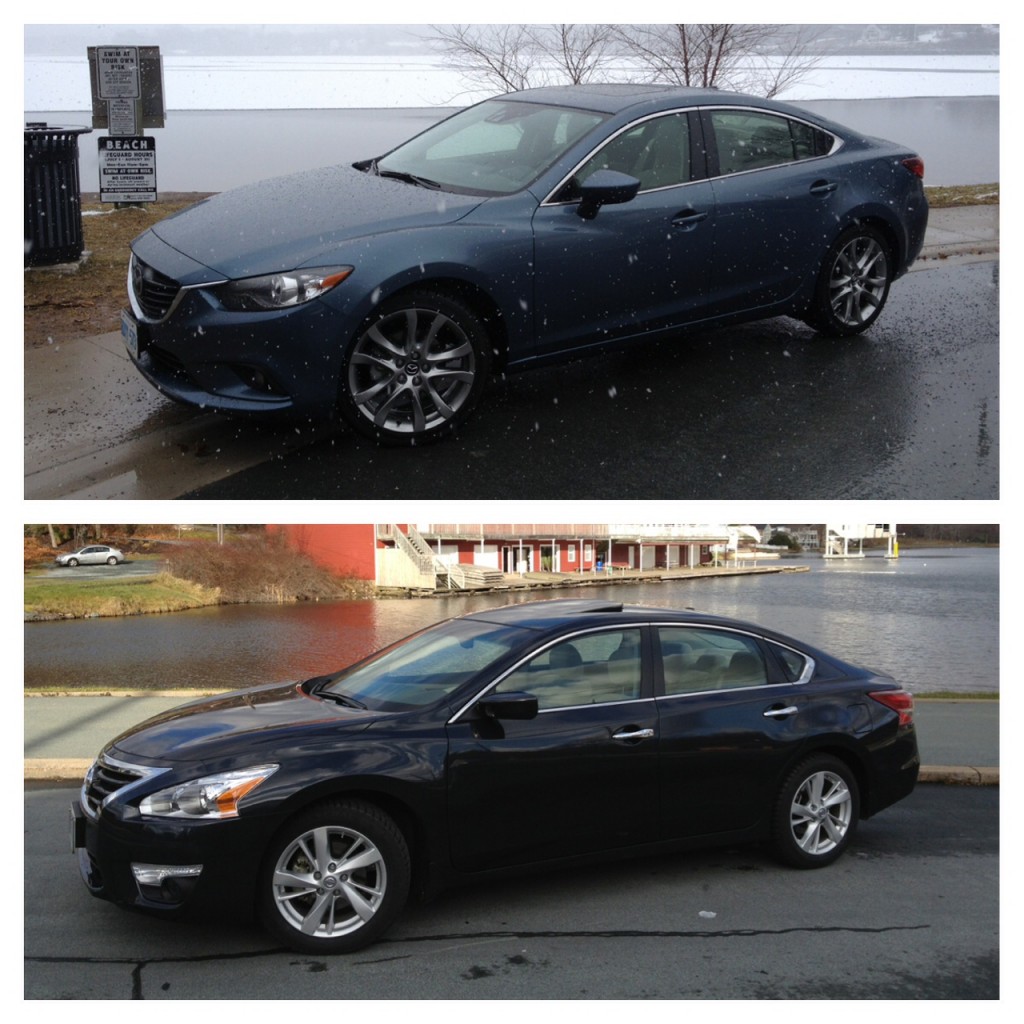 Why? Well because it was around this time when we saw the fundamental shift on what a family sedan should be. It used to be that family sedans got you from point A to point B without much fuss. And that was it. But back then, we started seeing more of a push towards making family sedans fun to drive.

We saw additions of V6’s and V8’s, which then turned into horsepower wars, matched with more interesting styling and handling abilities.

Things got so interesting, in fact, that when I was shopping around for my first car, I actually had a few family sedans on the list, not least of which was the Mazda6 and the Nissan Altima (in their performance guises, of course).

Now those days seem to be history. Now fuel efficiency has trumped horsepower wars. This means the elimination of most V8’s and V6’s, in favour of fuel efficient technologies. In fact, the Mazda, a brand traditional with ‘zoom zoom’, doesn’t even offer a V6 in their recently redesigned family sedan anymore.

What Mazda has instead opted to do is to offer a four cylinder-only using their SkyActiv fuel saving technology by making the engine inherently more efficient.

Nissan, on the other hand, still offers a V6, but they are very much promoting the efficiency of the 4 cylinder over the V6. They’ve opted to reduce fuel consumption by adding in a CVT transmission.

So, now it’s a battle between efficient technologies. Whose works best while maintaining what a practical family sedan should be?

Welcome to the Mazda6 GT SkyActiv vs. the Nissan Altima 2.5 SV battle. 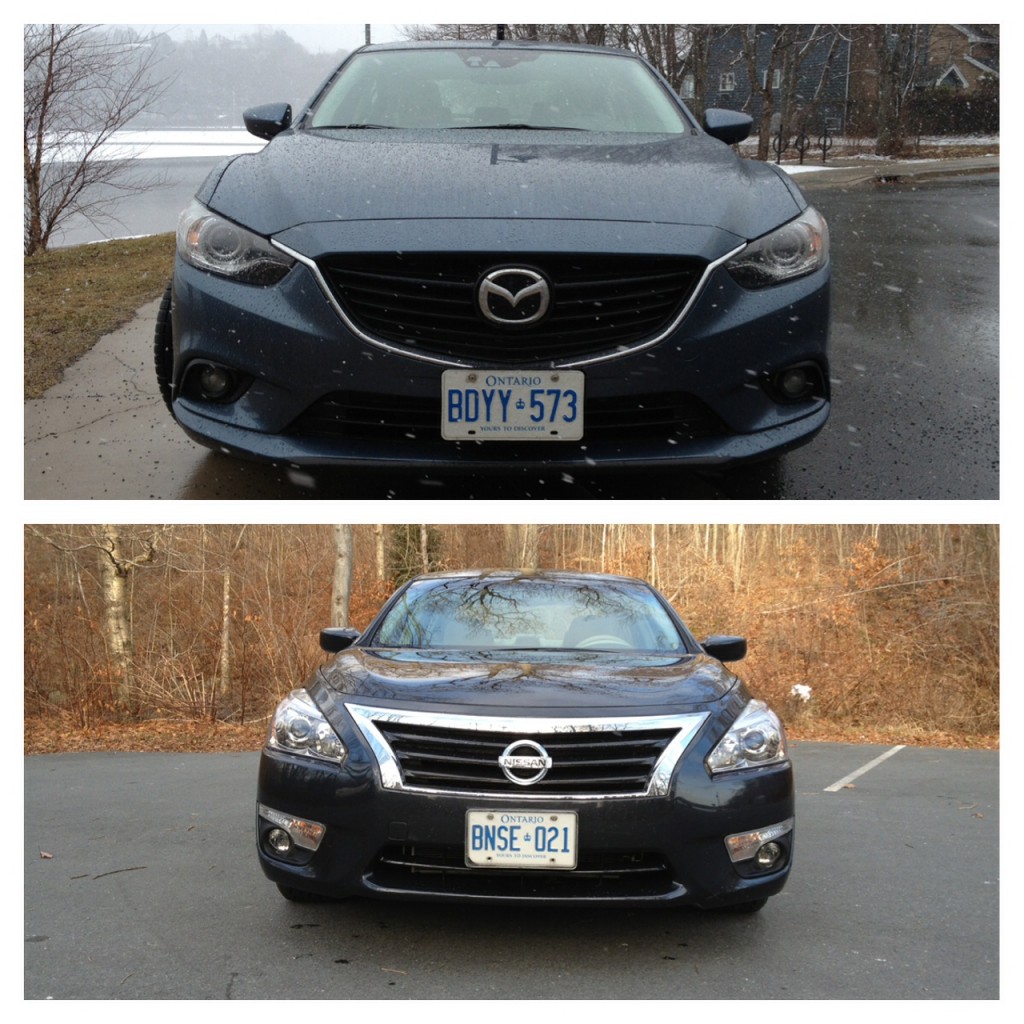 One thing I’m pleased to say hasn’t changed a whole lot is auto manufacturers desire to come up with an attractive family sedan, regardless of what’s under the hood. With the Mazda, they’ve incorporate their new design language, which, oddly enough, is more reminiscent of their designs of the past. This is likely due to the luke-warm reception of the ‘smiley face’ front fascia. This look is much more agreeable as are the swoopy sleek lines over the front fenders which translate nicely into a sculpted rear end.

The Altima has more of an evolved look as it took styling cues from the previous generation and tweaked them to look more clean and classy looking. The front end has a new grille while the rest of the car flows nicely, almost mimicking the Maxima.

The front end is easily the Altima’s best angle while the side profile is decidedly its best angle. Bottom line, the Mazda6 got way more stares than the Altima did. Like, an uncanny amount of stares. It was like I was driving a Lamborghini. Because of that, the Mazda6 wins this category. 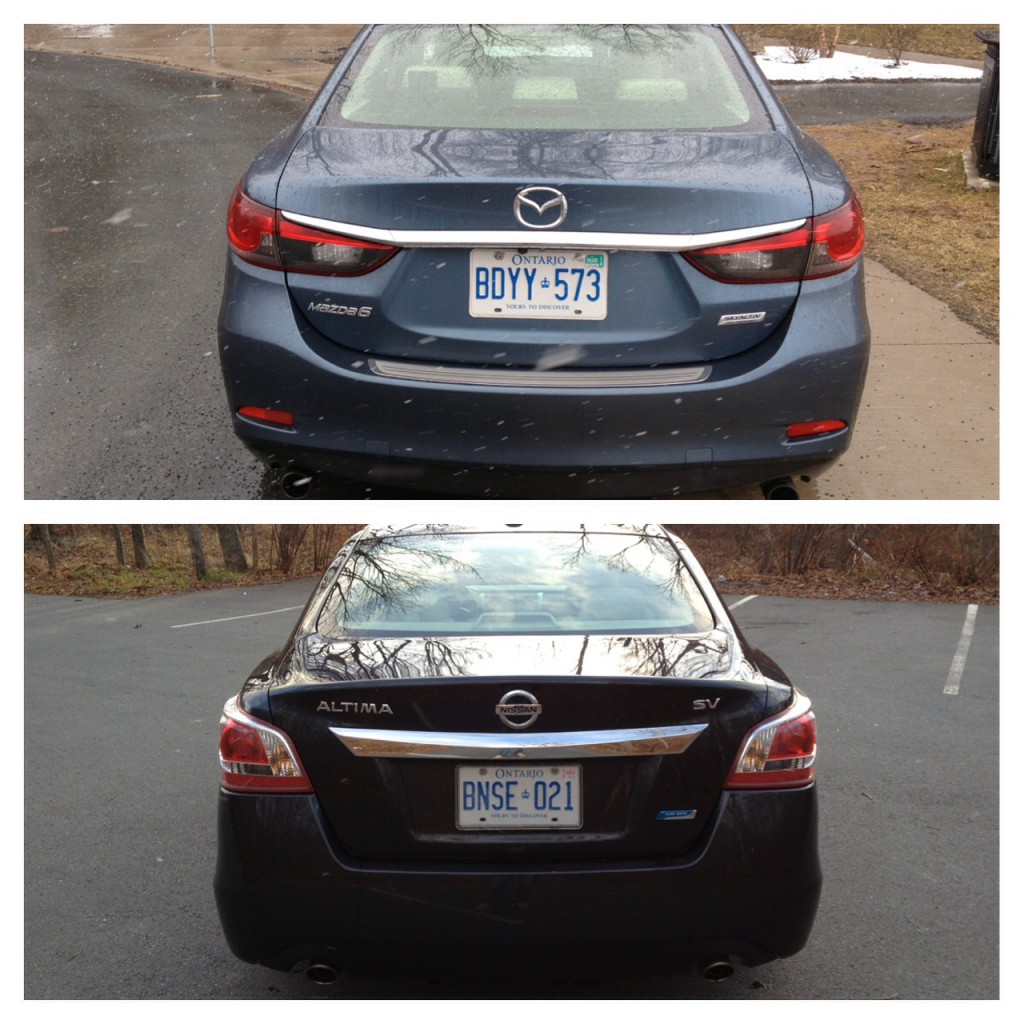 Inside both sedans receive revamped interiors. With the Altima, it receives a nice refresh with a redesigned steering wheel, high quality touch materials and a nice dash layout. The gauge cluster is bright and easy to read, and the dials are in the right places. The touchscreen in the centre stack is an adequate size, however I found it to be positioned a bit too low. The good news is that the rear back up camera provides a clear and crisp picture.

The Mazda6 provides an immediately eye-catching interior. The centre stack layout is almost Lexus-like with its long faux-wood trim which spans across the length of the dash. The gauge cluster, in typical Mazda tradition, seems like it’s trying a bit too hard to be ‘sporty’ but the numbers and readouts are fairly clear. The touch screen is positioned right, but at a time when most manufacturers are offering 8 inch+ display screens, the 6’s screen seemed on the small side. My tester’s top of the line GT trim insured high quality feeling leather on the wheel and seats as well as a host of easy to use buttons on the wheel.

Both interiors are nice, but it’s clear that the Mazda6’s is nicer. It’s sportier looking all while remaining premium feeling –something that’s typically found in German cars. 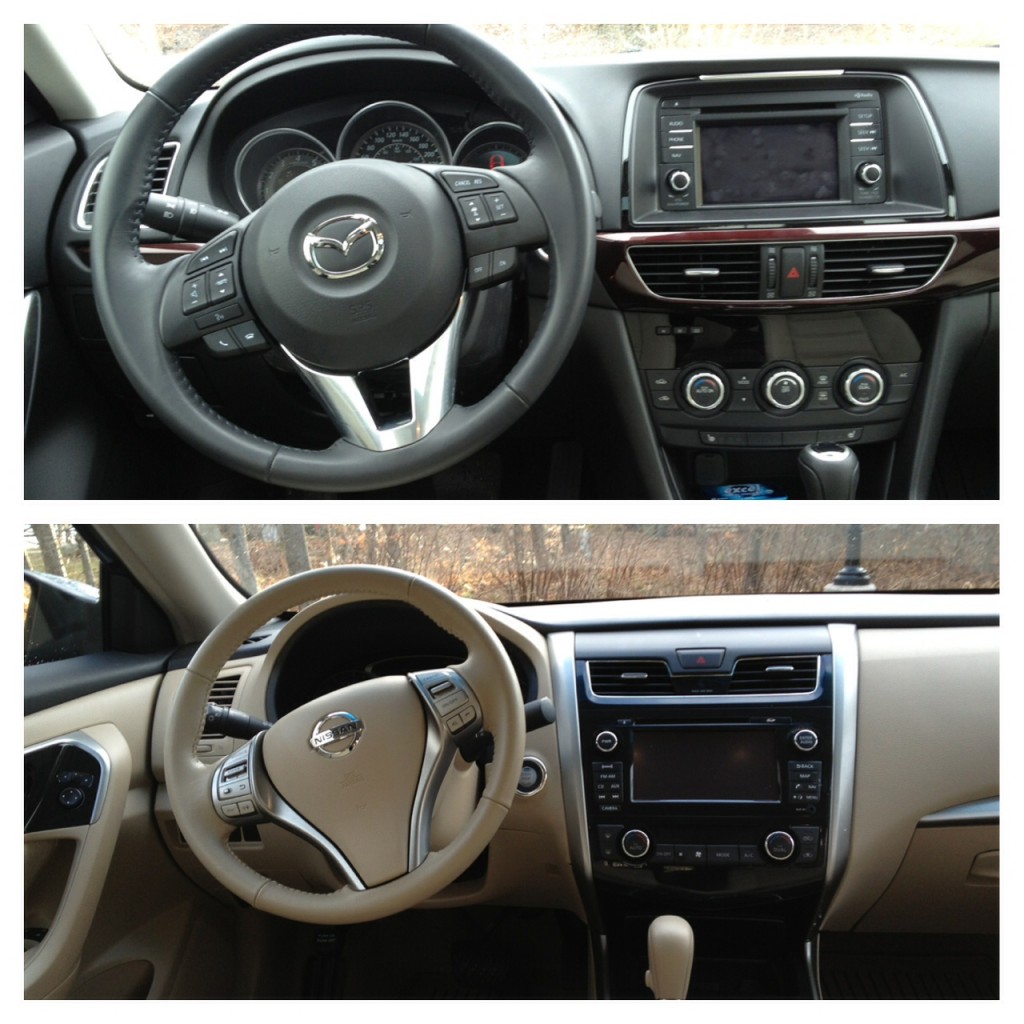 Interior room and cargo room is crucial to any good family sedan. If there were a gold medal for interior room, the Altima would win it. I’d wager any person, of any stature could get in and out with relative ease and be perfectly content with headroom and legroom on long trips, no matter which seat they found themselves in. It really is quite spacious. Cargo room is equally impressive with a large opening that reveals lots of room. The seats fold, but they do not fold flat.

The Mazda6’s cabin is clearly cozier with tighter dimensions almost everywhere. That’s not to say that they’re not adequate, but both headroom and legroom is clearly outdone by the Altima. The same goes for cargo room as the trunk opening is narrow, as is the overall height of the cargo area, however it is quite long. Those rear seats do not fold flat either.

As for seat comfort, the Altima offered a high quality cloth that is adequate for short trips, but I’d wager they would get uncomfortable for longer trips as they are a tad on the firm side. The Mazda’s seats are comfortable and the side bolsters are great –maybe even too great as they really hug the driver to keep him or her in place while cornering. This is good for someone like me who likes to have fun in the bends, but let’s not forget that this is a family sedan and mom or dad would be less likely to test the car’s limits with junior. in the back seat.

Outward visibility in the Altima is near perfect as the windows are both large and provide lots of light. The B-pillar and A- pillars are not too intrusive. Unfortunately the same cannot be said for the 6. The A-pillars very much block exterior vision and the B-pillars are quite thick. In fact, due to that swoopy design, exterior and rearward visibility on the whole inevitably suffers.

For that reason and the tighter cabin space, this round goes to the Altima.

Now, as I alluded to at the beginning, these two boast having among the best fuel efficiency in their class, but they both do it in two very different ways.

The 6 uses SkyActiv technology which essentially has higher compression ratios as well as lighter weight materials which ensures naturally higher efficiency all while keeping performance in-tact. It is officially rated at 7.6 L/100 kms city and 5.1 L/100 kms highway. I averaged 8.8 L/100 kms in mixed driving.

The Altima, on the other hand, relies mostly on the transmission to keep fuel chugging down. It uses a continuously variable transmission (CVT) which essentially uses a stepless gear changing system through an infinite amount of gear ratios. The end result is the feeling of having just one big long gear. The Altima is officially rated at 7.4 L/100 kms in the city and 5.0 L/100 kms on the highway. During mixed driving, I averaged 8.4 L/100 kms. 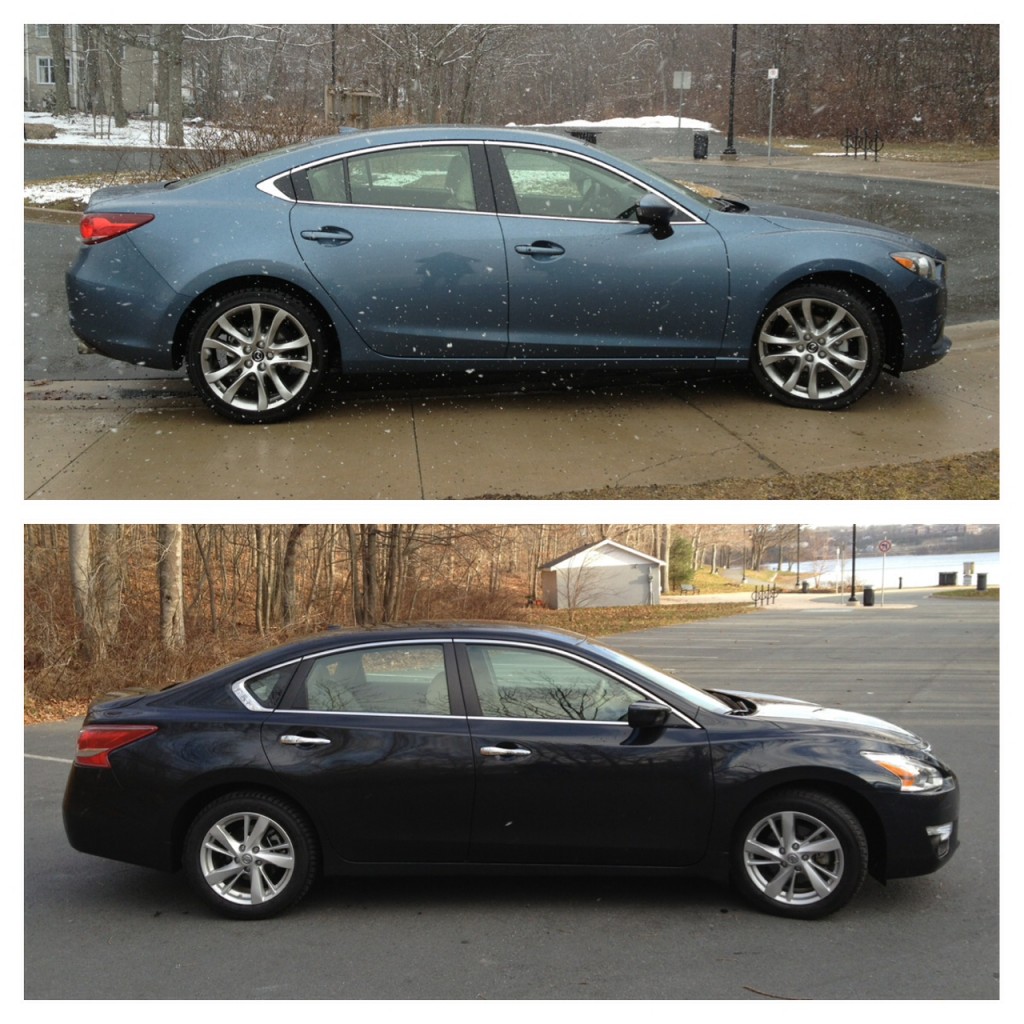 The Mazda6 gets a 2.5 four cylinder engine which produces 184 horsepower and 185 pound foot torque mated to a six-speed automatic transmission (a manual transmission is available). The end result is a rather smooth engine with a decent amount of power when you put your right foot to the floor. There is also a unique sounding exhaust note that couldn’t quite be described is intoxicating, but there’s something about it that is oddly appealing. The transmission shifts are smooth, if a bit on the eager side as the transmission is constantly trying to keep you in higher gear for fuel savings but I must admit, it’s not nearly as bad as other automatics I’ve experienced. Bedsides, shifting the gears yourself provides a much more engaging ride.

The Altima also gets a 2.5 litre four cylinder engine. It produces 182 horsepower and 180 pound foot torque. There is a manual transmission available in the base level of the trim line and it may almost be worth it to give up some goodies for a normal transmission. Traditionally, Nissan has been among the best at making CVT’s (that is to say, they’ve been the best at making them tolerable). I don’t know what happened. It may have been the cold weather but this CVT was louder and buzzier than any CVT I’ve experienced in a Nissan. In fact, the transmission was so buzzy that it started to rattle some of the interior panels making for an irritating, unrefined ride. The Altima doesn’t feel quick either as the CVT seems to fight any effort you make to get the Altima going.

In terms of handling, this is where the zoom zoom really shines through for the 6. Despite its size it’s able to take corners quite well in most situations. There’s slight understeer when you really take it to its limits, but otherwise it feels quite composed. It’s also very solid feeling on the highway –so much so that there were a few times when I thought I was riding in a big German sedan. The 6 really gives the driver confidence on the road.

Unfortunately the same can’t be said for the Altima. Its ride is more mushy feeling. If you push it hard, it pushes back with lots of under steer and a wobbly suspension. My tester’s winter tires probably didn’t help, but I’d wager the ride would very much be the same even with a good set of summer tires. On the highway, the steering feel and wafty suspension don’t give the same kind of confidence to the driver that the 6 does, and that buzzy CVT makes you feel like you’re driving anything but a big German sedan. 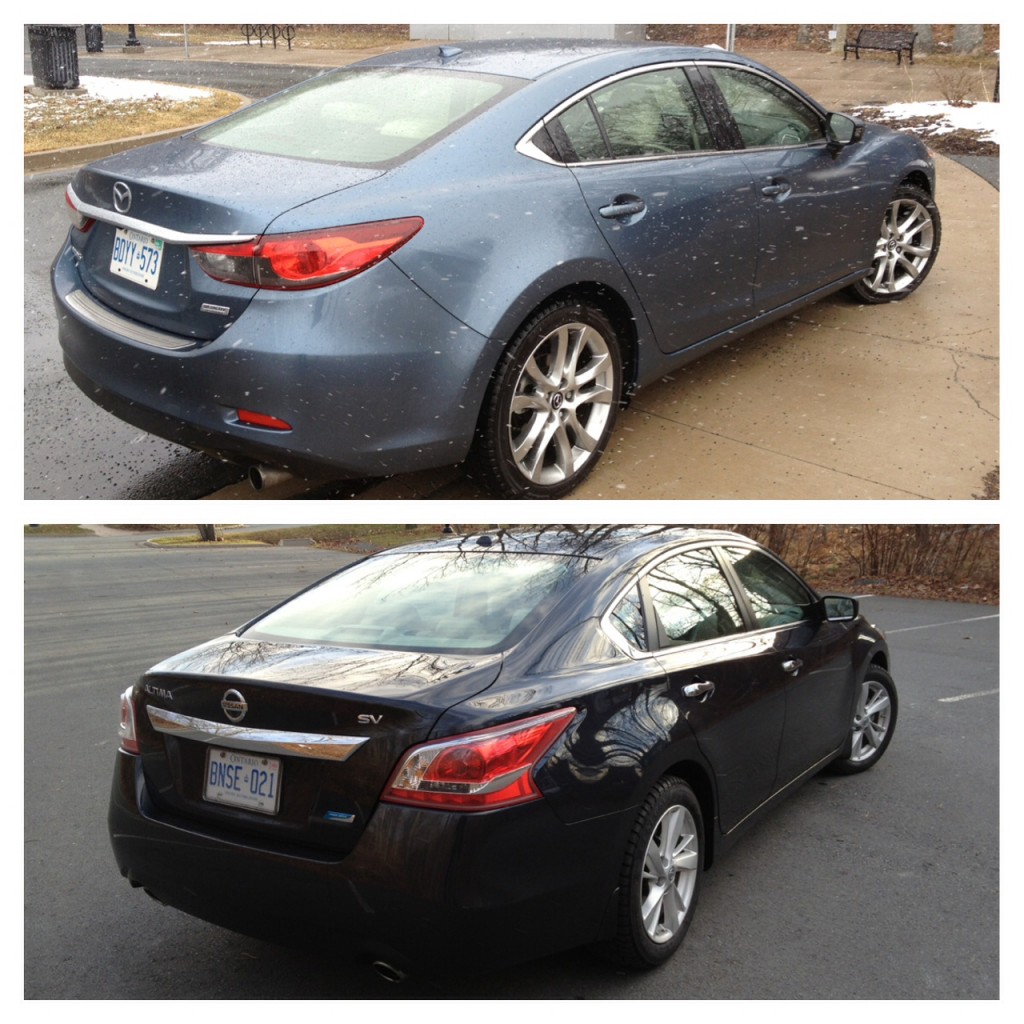 So, the family sedan segment has definitely changed over the past ten or so years and if these two are any indication, it’s mostly changed for the better. Family sedans are definitely more stylish, more efficient, just as fun to drive and just as safe as ever. But there’s one in particular in this comparo that really stood out in every sense of the word and for that reason it takes the cake.