There is a boat load to choose from in our market that’s why thought it would be a good time for a comparison test.

I thought it would be interesting to pit a brand new entry against a vehicle that’s been in the game for a while now –into its second generation and receiving a facelift. 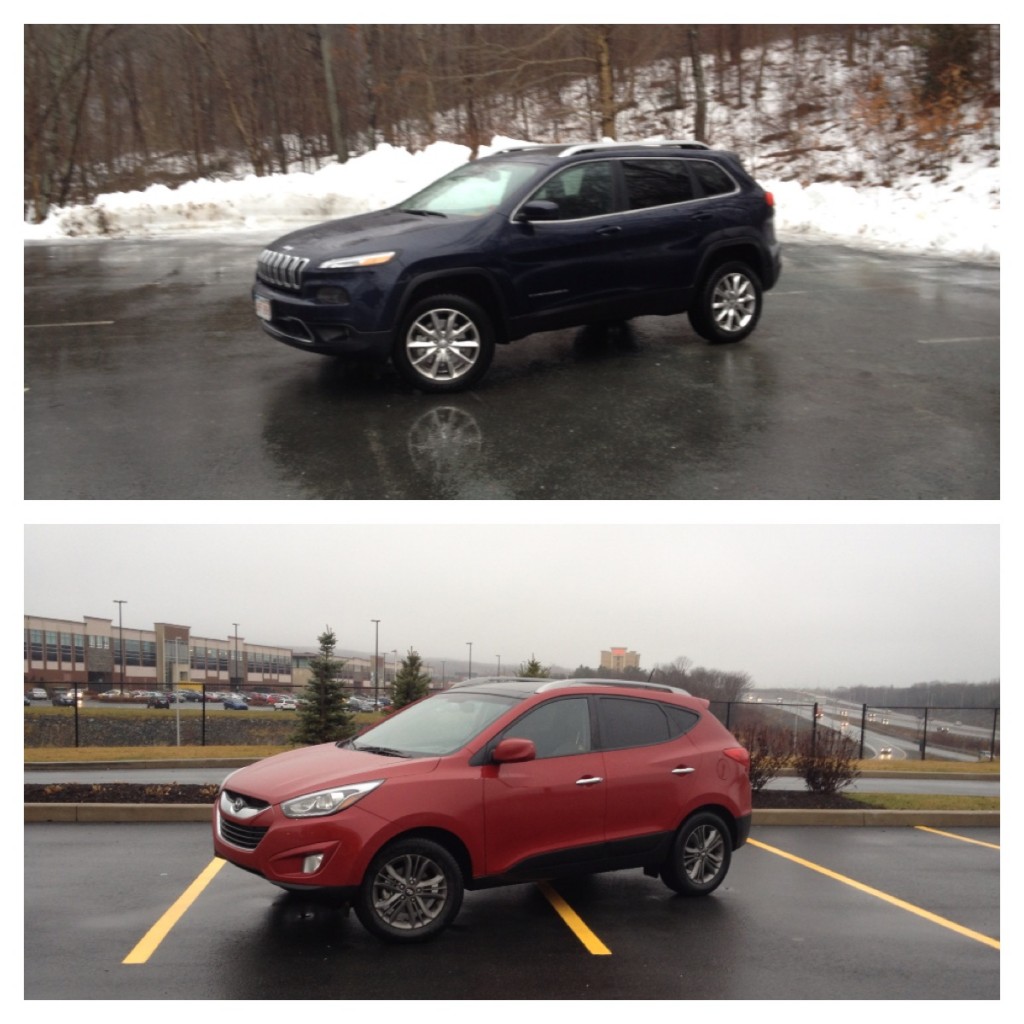 When Hyundai introduced the second generation Tucson a few years ago, its exterior styling was a major departure from the first generation. It was easily the head turner in the segment. The only problem with coming up with such eye-catching styling is it makes it difficult to refresh it when the time comes. That’s why it’s likely only Hyundai purists would notice the facelift from the 2013 model year. The 2014 Tucson gets a redesigned headlight cluster with daytime running lights, a tweaked front grille and new wheel designs. Top trim levels receive redesigned tail lights with LED’s, but the lesser trim levels keep the 2013 styling. Overall the Tucson remains an aggressively styled vehicle that’s mostly agreeable to the eye.

The Jeep, on the other hand, may have a familiar name but the front end will not be familiar to mostly anyone. A topic of controversy, the pointed front grille, LED daytime running lights and indicators housed where headlights would normally be with the headlights camouflaged under the grille by smoked out lenses is definitely one of the most radical designs to come from the Jeep brand in a very long time. To my eye, the look works well to blend traditional Jeep styling cues with modernized styling. I suspect most Jeep purists will be turned off by the look, but I personally do not think it’s ugly or very controversial since Nissan was the first to use this kind of front end design language on its Juke, which as been around for a while now for us to all get used to. The styling was certainly a topic of conversation with friends and co-workers as one described the front end of the Jeep as looking like Bane from Batman, while another commented that it looked like the Jeep was wearing braces. Either way, this thing gets noticed. The rear end styling is clear with more traditional Dodge-esque LED tail lights and a massive opening to the trunk. Match it with my tester’s 18 inch chrome wheels and you’ve got yourself a looker for sure.

At the end of the day, styling is subjective but since the Jeep was the talk of the town when I had it and not one person really noticed the Tucson, the Jeep wins this round. 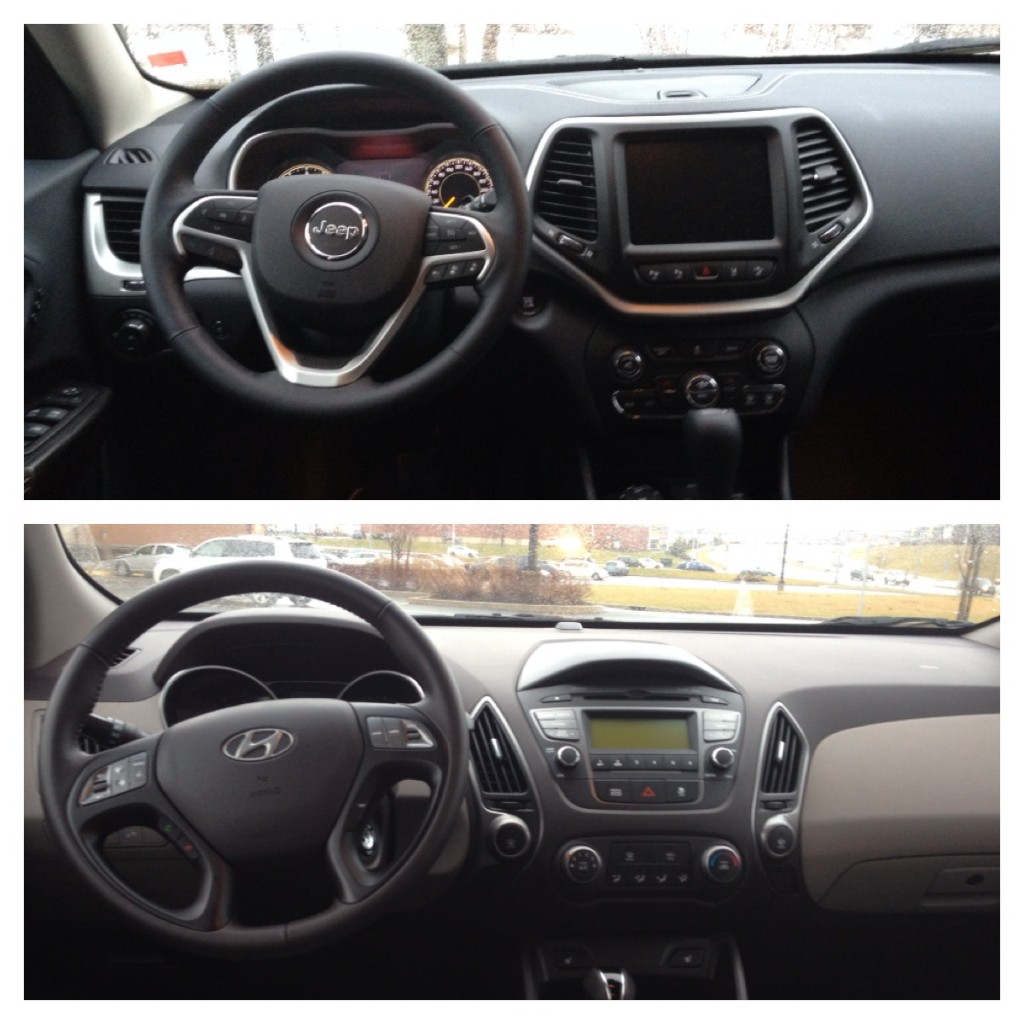 Inside is generally a pleasant place to be for both vehicles. In its mid GLS trim level, the Hyundai comes decently equipped. My tester has all the bells and whistles you’d expect – my only complaint is that the leather Hyundai uses continues to feel low quality. That said, all the buttons and knobs are where you’d expect them to be and the gauges are generally easy to read – although I’ve never been a fan of the dark blue background that Hyundai uses to illuminate the buttons and gauges at night. Unfortunately they choose this background for the rather small display screen making it slightly hard to read at times.

The Jeep’s interior design is quite nice with lots of soft touch materials throughout. My top of the line ‘Limited’ tester certainly wasn’t limited in terms of goodies. The plush interior is anti-Jeep by its very nature but it’s very much welcomed – as is the heated steering wheel which could quite possibly be the best invention ever made for Canadians. On top of that, heated and cooled seats along with high quality feeling leather complete the whole package. The gauges are relatively easy to see with the white background as is the rather large central display screen. Unlike some other touch screens it responds to your commands 9 times out of 10 which is refreshing.

Even though the interior of the Tucson is nice, even with the update it still isn’t quite up to par with the Cherokee’s interior. I’m willing to concede that the Cherokee’s top trim level compared to the Tucson’s mid-trim level may have been a deciding factor, not to mention the interior of the Jeep is all new and different from other Jeeps while the Tucson’s interior mimics other Hyundais, however overall the Jeep is the clear winner in this category. 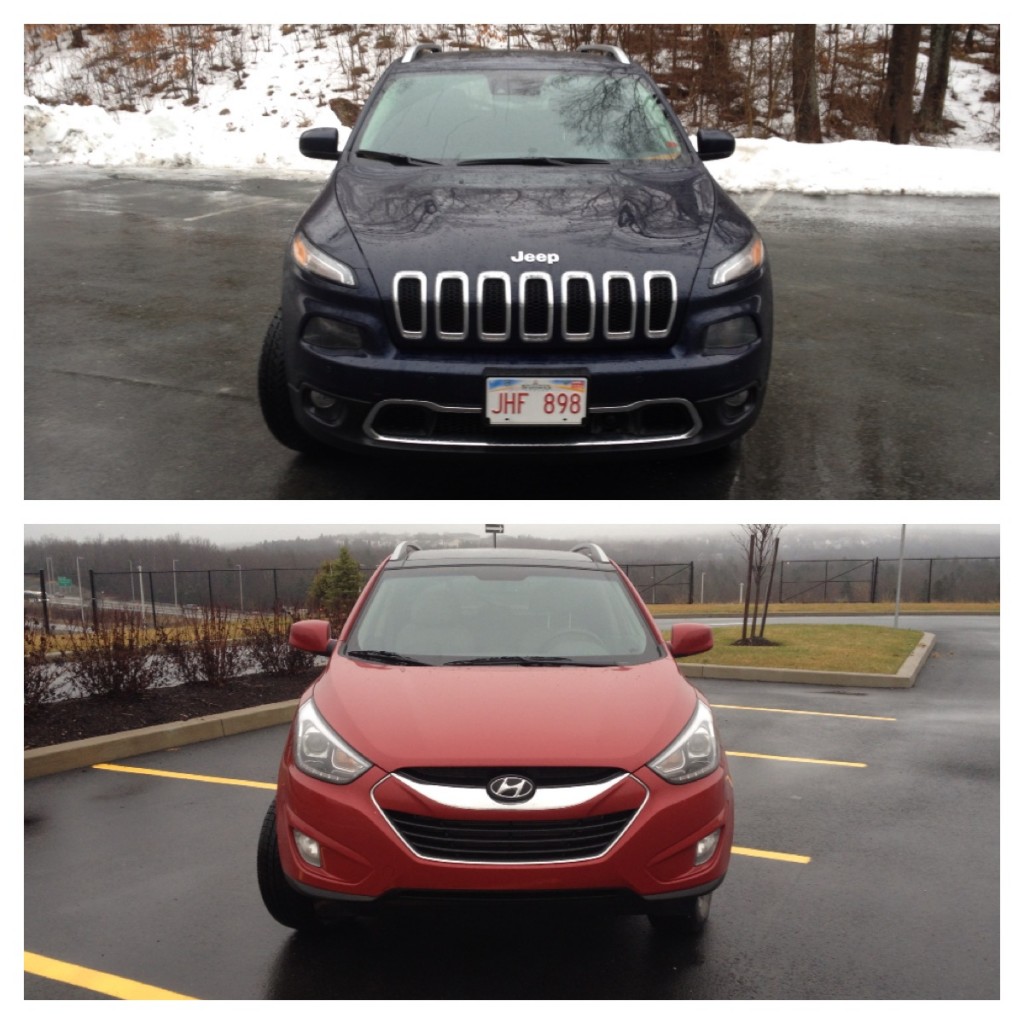 Suffice to say, as crossovers, both handle interior comfort, room and cargo capacity quite well. The Cherokee easy swallowed lots of blue bags full of cans to the recycling depot, while the Tucson transported four friends from a get-together in comfort with lots of room for all passengers.

The dimensions of both vehicles are pretty similar and while the Cherokee’s top trim level netted it a few perks like auto-closing/opening tailgate, it’s fair to say that both are quite capable in this area.

Unfortunately it was bad enough to tip the scales in favour of the Jeep in this category. 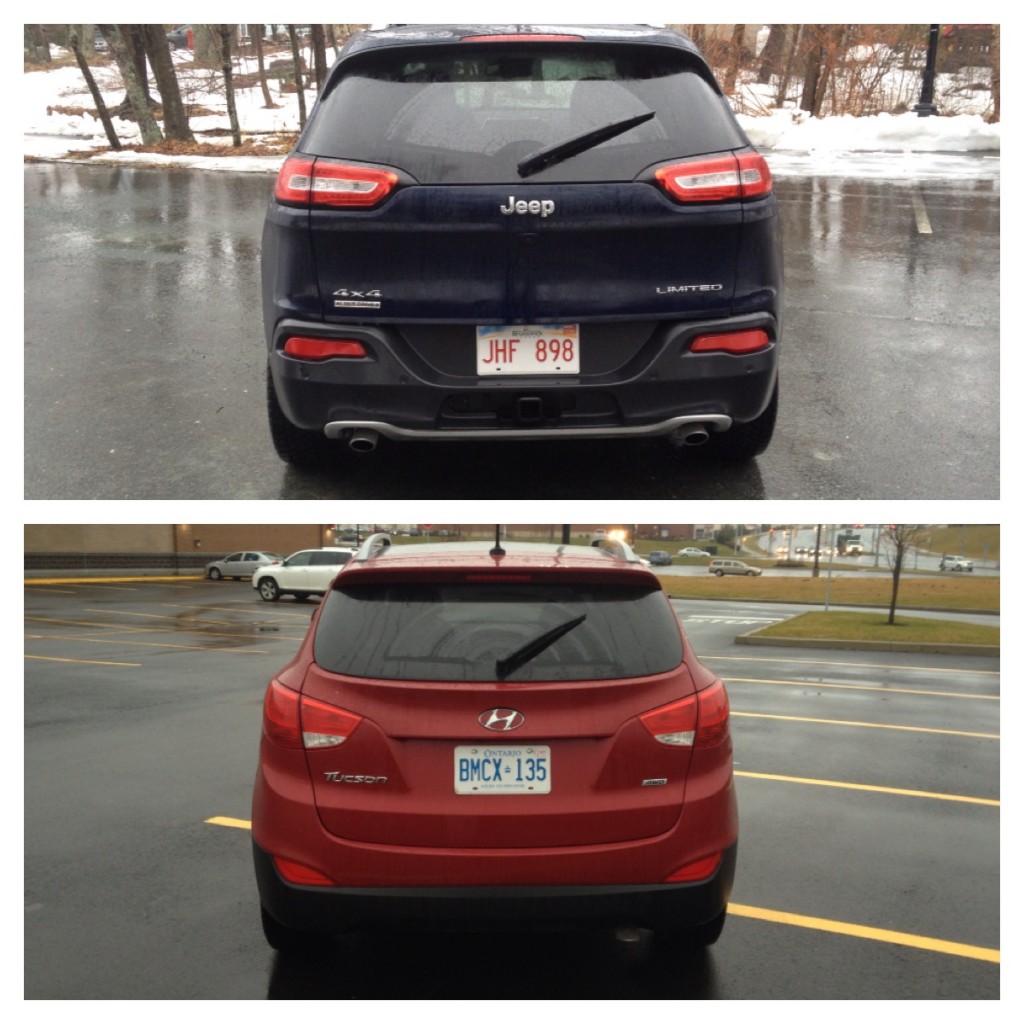 No matter the trim level, the Tucson comes with one engine option which is the 2.4 litre inline four cylinder which makes 182 horsepower and 177 pound foot worth of twist. The end result is more than adequate power for every day driving situations. The six speed automatic doesn’t neuter the engine by forcing upshifts to higher gears too quickly, however I will say that it isn’t a very ‘active’ transmission. It’s a bit difficult to explain but it was almost as if the transmission had no interest in being a transmission: “Shift? If I must”. There was no real quickness and no real refinement.

Where the Tucson picks up some marks is for agility and maneuverability. It is fairly responsive to quick turns and is quite easy to move about in sharp corners where body roll wasn’t nearly as noticeable as it was in the Jeep. On top of that, there seemed to be minimal road noise and a rather smooth ride on the highway –until you hit a bump or a corner that is. I’ve complained about the hollow feel of other suspension set up in Hyundais the Tucson is no different. That matched with the rather useless and gimmicky ability to change the weight of the steering wheel which has no effect on directionality or responsiveness and I left rather scratching my head after a week with it.

The Jeep’s rather high ride height obviously makes it more than off-road capable – as you’d expect from a Jeep, but it did make cornering a bit more challenging. Even taking the simplest of corners would sometime require some extra caution.  My tester rode on 18 inch wheels which were quite noisy on the highway and with those two matched together, it made for a rather uncertain ride on the highway. That said, the ride is still super comfortable on smooth surfaces – a ride that feels borderline luxurious.

Power comes from Jeep’s award winning Pentastar V6 which makes 271 horsepower and 239 pound foot torque. Considering the Tucson’s 182 horses were good enough, the Cherokee’s 271 horses seems like a bit of overkill for everyday driving however Jeep does offer a 2.4 litre 4 cylinder as well. The 3.2 V6 is pretty damned good in terms of refinement and power. The only thing that holds it back a bit is the slight harshness of the transmission and the sizeable delay in tip in, which could be forgiven because this likely is due to its off-roading roots. However the 9-speed automatic is overkill. Hell, I think 8 speeds is overkill. You never really reach the 9th gear in real world driving unless you force it to manually. So there’s certainly no performance advantage to having all these extra gears. But the engine itself makes a decent roar that would get the testosterone flowing in  any male, but while it’s decently powerful, it doesn’t feel particularly fast – likely due to weight.

That matched with the cautious cornering means the Tucson is keeping up a fair fight in this category, it would otherwise be the clear winner. I know that may be shocking to hear considering the engine in the Jeep, however performance is no just about big power numbers, it’s about how you put those numbers down in the real world. In fact, I was prepared to award this category to the Tucson, but then we got some snow. The Tucson performed just fine in the snow, no real notable issues but the Jeep did phenomenally. Put it into ‘snow’ mode and it absolutely becomes a legal snowmobile for the streets. On top of that, the Jeeps off-road capability would absolutely slaughter any capabilities the Tucson has off-road and that means the Jeep climbed its way back in this category to make it a tie. 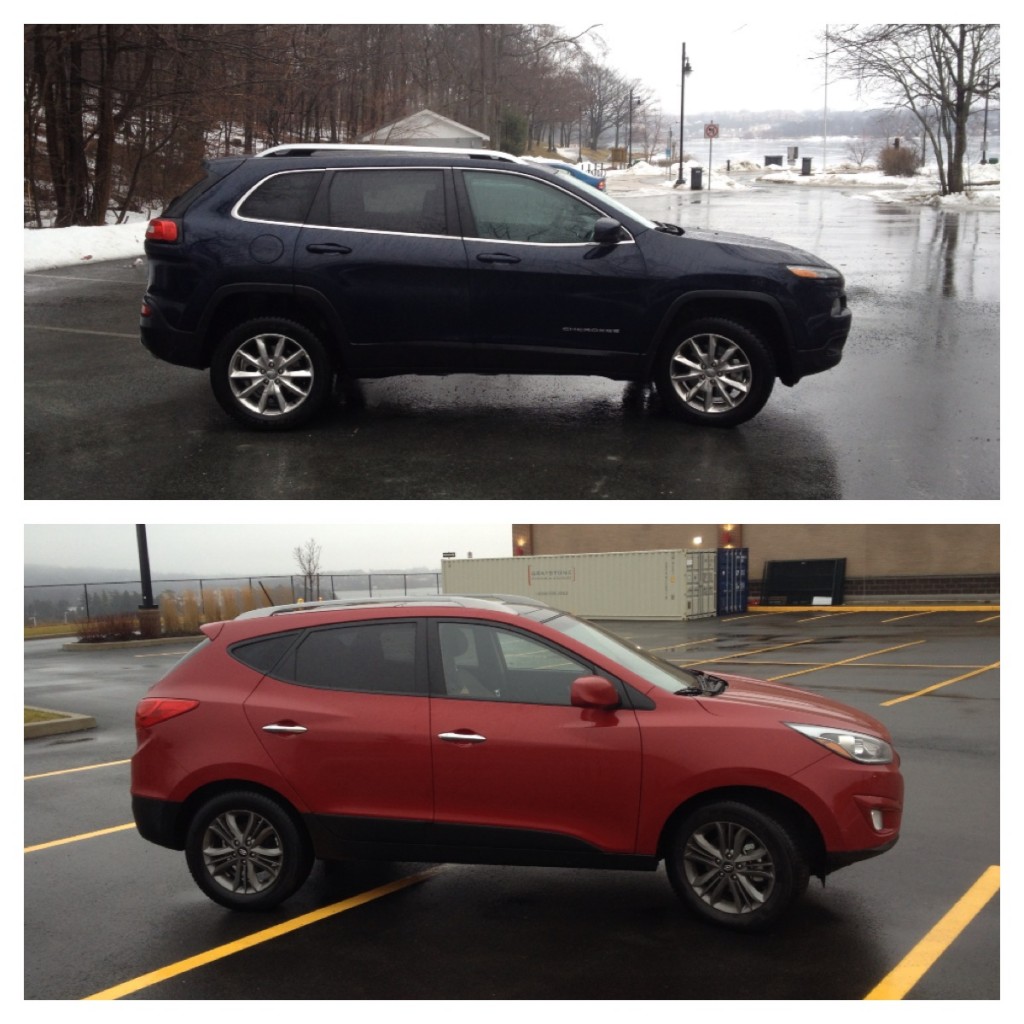 The Tucson is officially rated at a rather disappointing 10.2 L/100 kms city and 9.2 L/100 kms highway. Don’t let those numbers get your down though. My real world consumption somehow beat both those ratings in mostly city driving and in bitter cold temperatures. I managed to get 8.9 L/100 kms. Much better than the numbers suggest despite the temperatures and a bit of flogging every now and then.

The Jeep’s official ratings are surprisingly good, at least on the highway. It gets 11.1 L/100 kms city and a rather impressive 7.7 L/100 kms highway. In real world driving (which again was mostly city) I returned 9.6 L/100 kms.

Considering this car has the bigger engine and even bests the Tucson’s official highway ratings, I was inclined to award this category to it because, no matter how you spin it, that’s very impressive and the 9-speed auto is likely to thank (yes I’m aware that I said it was too many gears, but that was for the performance category). However, as Jay-Z says, men lie, women lie, numbers don’t. The Tuscon’s numbers were still better and it was still just as impressive to get the figures that it did. 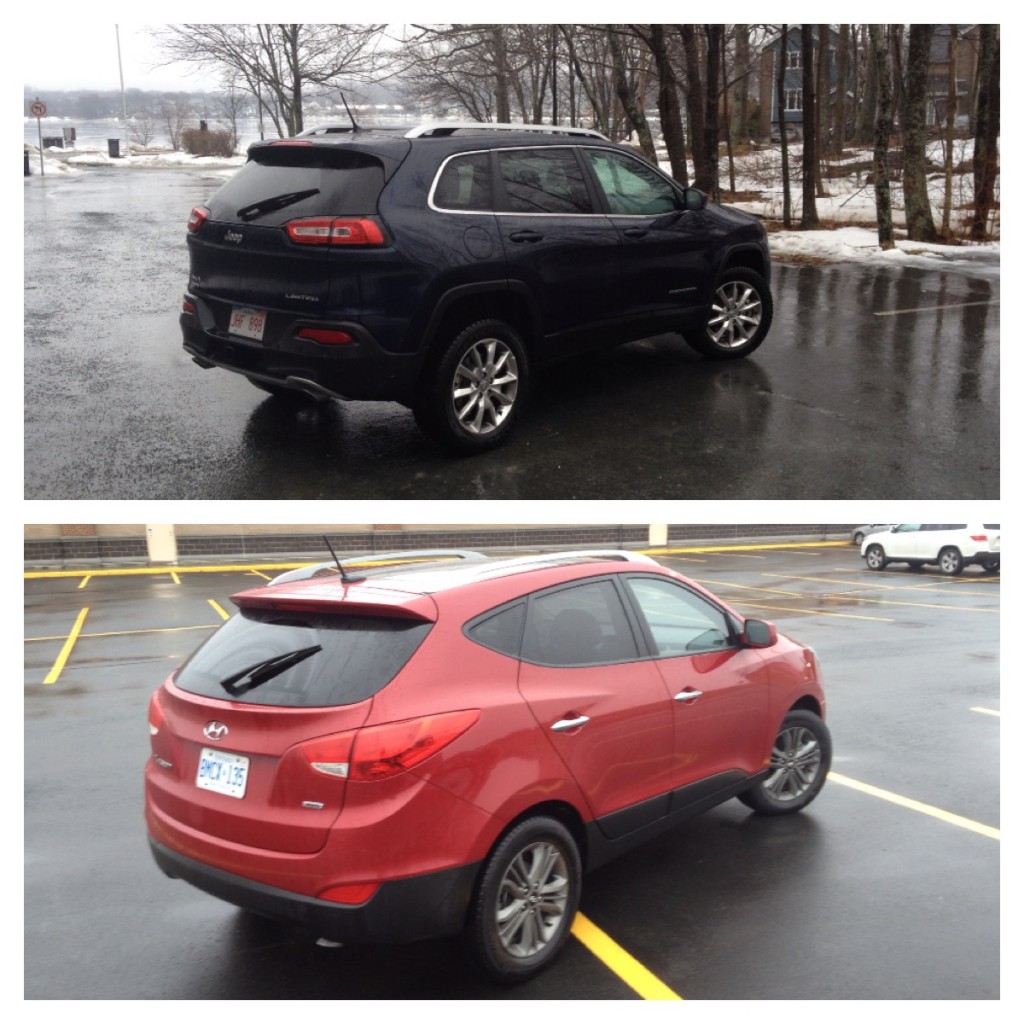 So we have old versus new and even though there’s a clear winner in this comparison, there still really isn’t a clear winner when you take a look at the original question. Do you go with what’s proven itself to be good enough to stick around for two and a half generations or do you go with completely new product with the latest tech, styling and cache. I think it’s clear that with these two, no matter which you choose, you’ll walk away a winner. For the purposes of this test though, I’d definitely take the Jeep. It should be said, though, that I’d take a lesser trim level of the Jeep. As you’ll see the price of my tester was quite steep. 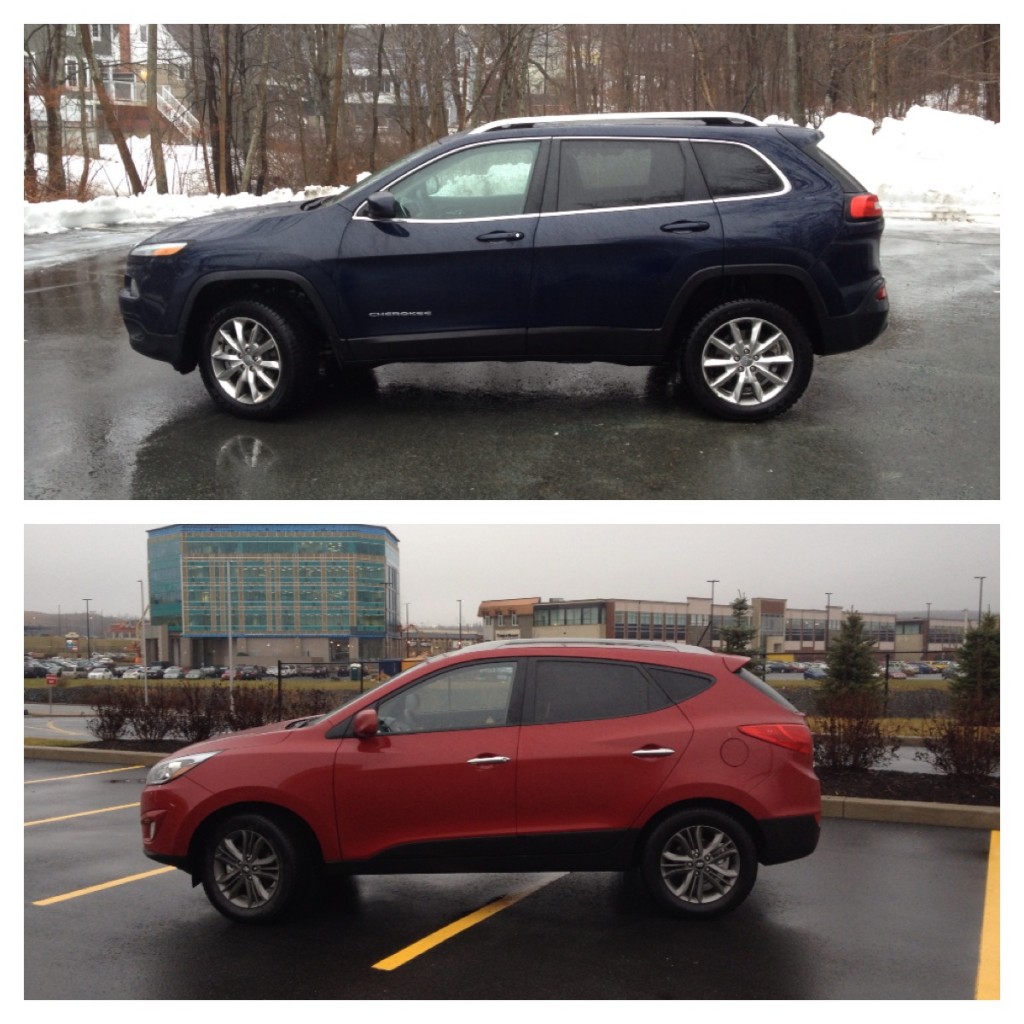