There has been an interesting trend in the pick-up truck market for the past few years. While every other automotive market has adopted an eco-friendly less is more attitude, the trucks have gotten bigger and more powerful. Now a submarket within the truck world seems to be gaining even more popularity – the factory off-road spec. Ford has the F-150 Raptor, Chevrolet has the Silverado Reaper and Dodge has just lifted the curtain in the 2015 Ram 1500 Rebel.

The Rebel sits aloft 33” Toyo all terrain tires and has air suspension which can raise the truck 1”, Bilstein shocks, skid plates and tow hooks, we could go on but it is clear that this truck is ready for some dirt. There is nothing subtle about the styling of this rig either. The bold new grille shouts get out of the way, the hood has two snorkels in it that add to the menace and the chrome “RAM” emblem will likely appear more prophetic (I will ram you out of the way) than label as you gaze back at it through your Prius’ rear view mirror. Dodge has used a lot of black paint here. The wheels, bumpers, front end, wheel arches, mirrors, “RAM” on the tail gate and lower body panels all black; if Batman had a truck this might be it.

Rebel will be motivated by either the 3.6L Pentastar V6 that puts out 305 hp and 269 lb-ft of torque or the 5.7L HEMI V8 that musters 395 hp and 410 lb-ft of torque. Both engines are mounted to an 8-speed automatic transmission.

The Rebel can be had only as a crew cab but you will have the option of 4X4 or 4X2 if you opt for the HEMI, otherwise 4X4 is standard. 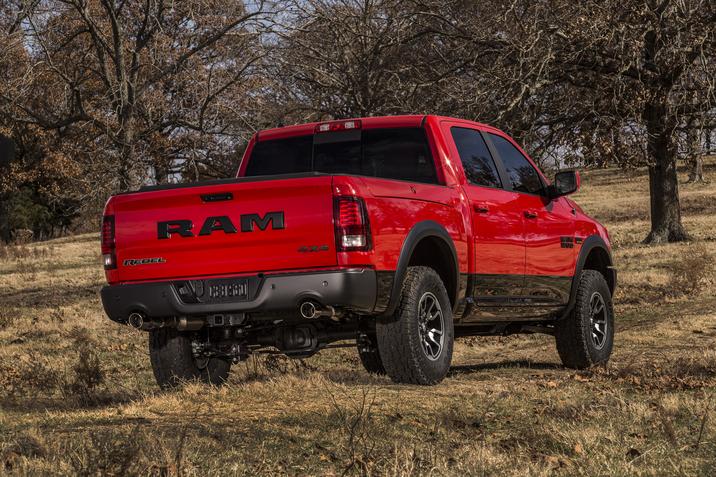 Step inside and you will not find a leather clad luxury cabin. What you will find is a functional easily maintained interior. The seats are covered in tough vinyl-like material, which can take the off-road abuse, and will wipe clean quickly. The heated front seats are red with black fabric inserts and feature an embossed pattern designed to look exactly like the Toyo tread pattern, and a gray Rebel logo embroidered in the bolsters.

The instrument panel is black and has red accent stitching and red trim. Personally I do not like the contrast between the black and red, it feels a bit cheap to me. Other than that stylistic gripe the cabin is a well done. There is loads of storage available throughout. A new center console bin has a cell phone/tablet holder built in and can hold gloves, flashlights etc. The steering wheel is heated, a nice touch for those of us who are knee deep in snow for a good portion of the year. 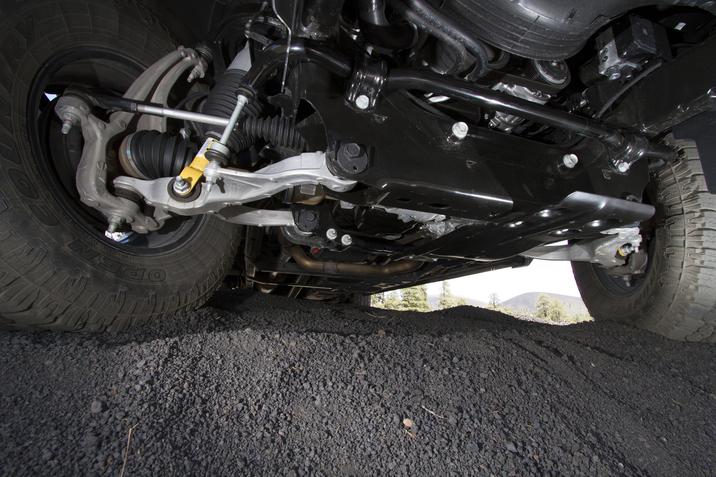 There has been some spirited discussion amongst truck nuts on social media. They are broken down into two groups; Ford Raptors fans, and Dodge Ram fans. The Ford crew are very quick to point out that the Rebel is not a direct competitor for the Raptor, which will be much quicker across sand dunes and open country dirt paths. What the Rebel does offer is some very serious off-road ability. The best part is the Rebel should be significantly less expensive.