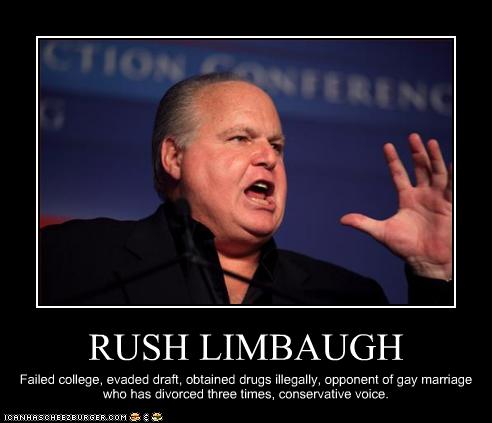 If there’s one thing that drives me mad it’s when people who know nothing about a topic try to form an opinion on it anyway and then try to convince others that their opinion is right. This accurately describes Rush Limbaugh’s entire life.

If you don’t know who Limbaugh is, consider yourself lucky. If you are curious, well, let’s just say that he is an extreme right winged so-called political pundit who, for some reason, has his own radio show. As you can see by his picture, it’s obvious why no one wants to give him a  TV show.

On his radio show Limbaugh likes to talk about current events, of which he clearly does not follow or understand. Racist Rush, as I like to call him, decided to have a go at another topic that he is clearly ignorant about: Cars.

Specifically, Limbaugh decided to lay into the upcoming Chevrolet Volt. Limbaugh claimed that the Volt is stupid because it costs too much. I will admit, the $41,000 US starting price is about five grand more than anticipated, but since Rush’s hates the environment and will find any excuse in the book to slam efficient technology, he almost purposely failed to mention that the Volt can also be leased for a very reasonable $350/month.

He then declares that since there are government incentives on cars like the Volt of up to $7,500 off ($10,000 off in Ontario), there clearly must be no demand for cars like these.  Because it’s not like America was hit hard by the recession thanks to fools like your beloved George W. Bush and people need stimulus in order to buy new cars again, right Rush? Besides, as Autoblog pointed out, there were tax write -offs for Hummers and other huge gas guzzling SUV’s just a few years ago. How come you didn’t speak up against that then, eh Rush?

And to top it all off, and to showcase just how ignorant he is, Rush then decided to misinform all his listeners by proclaiming that the Volt is only capable of 40 miles (65 kms) then it runs out of juice. A little research goes a long way and if Limbaugh had the inclination or the wit to do so, he would’ve found out that the Volt can go an additional 300 miles on a regular gas engine when the electric motor runs out of power.

Now, I’ve been a bit critical of the Volt myself in the past, but I know cars. They are one of my few topics of expertise. And with that said, despite my minor criticisms, I still like the Volt. And I want it to succeed. I’m very eager to try one out for myself, mostly because I understand how it works and it’s intriguing. I would never claim to hate something without first understanding it. But that’s how Rush rolls and he is exactly what is wrong with society today.

You don’t like the Volt, Rush? Just pop a few more of those pills and the Volt won’t seem so bad, will it?

0 Responses to "Rush Limbaugh Knows Nothing About Cars, Has Opinion Anyway"